Astride lofty wheels (part VII): The kindness of neighbors 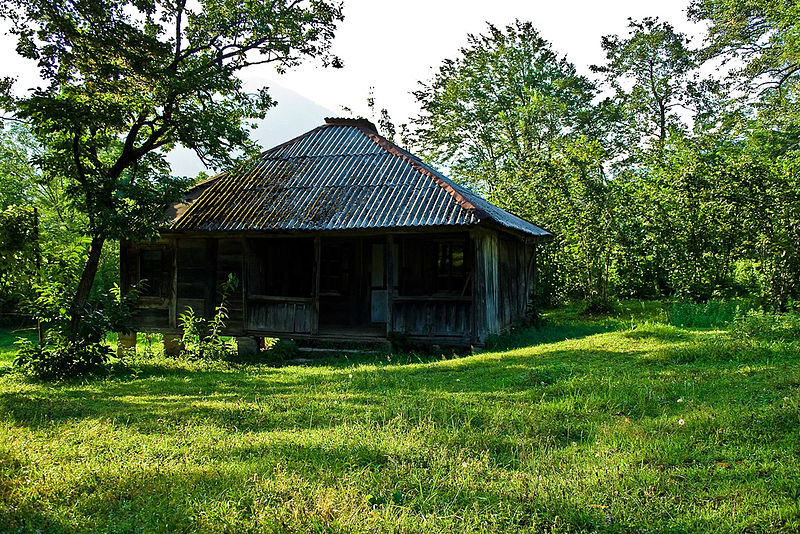 A typical 19th century farmhouse, which the men relied on finding while on their bike ride. (Photo: Wiki Commons)

Their route continued north from there, taking them one-hundred fifty miles through farm country to Columbus. It was a day of mirth for any traveler prepared to regard the surprises of the road with levity, as they were. The hard red clay of the road out of Greenville seemed promising at first and allowed them several miles of good riding. But they soon found their wheels sunk in soft sand beds and had to walk again, pushing their bicycles through the cloying turf.

Once they reached the forest of Georgia pines, parts of the road became ride-able, the fallen needles forming a brittle but ride-able natural pavement. However, the ground tended to go unexpectedly soft, making for some amusing headers in which “the sand would melt under us, and down to Mother Earth we would gently go.”[70] Passing a church out in the country, they caused the entire congregation of black country farmers to pour out of the chapel and run behind them, pointing with astonishment at the seemingly alate trio of white gentlemen zooming up the road on their bizarre contraptions.

Dinner that afternoon came at the hospitality of a farm family, and these urban men found themselves pleased enough with the “peculiar” meal set before them that Captain Hill was moved to make a note of the menu: cold mustard leaf greens, cold salt side meat, corn bread baked in ashes, blackberry jam, stewed peaches, apple and peach pie, butter milk, and coffee.[71] Having found that nothing fortifies digestion like cycling through the country, they all ate plenty. Their hosts advised them to stay overnight, on account of a swollen creek not far up the road. But feeling full and optimistic from their big country meal, they decided to push on. Only two and a half miles out of town, they came to the swollen creek and found that all the optimism in the world wouldn’t get them safely across the deep, rushing water.[72]

Having asked around in the village after lunch, they knew that teams of oxen and horses had forded the creek earlier that day.[73] So, they took a rest, patiently soaking up the sylvan surroundings, listening to the gush and gurgle of the water and hoping for a lift. Finally, along came a “good-natured” farmer on his way back from the market. His wagon, drawn by a couple of young steers, was loaded down, but he agreed to carry one of the them across on his wagon on the condition that if the wagon got stuck the rider would jump out and help push. Captain Hill took the deal. Once Hill had arranged himself and his machine among bags of flour and meal, they started across, and sure enough the wagon bed was soon under water and not moving, the noses of the steers just out of the water. Hill, honoring the agreement, jumped out into the creek and helped the farmer push.[74] The other two eventually crossed in horse buggies.[75]

By the time they’d all made it across the creek it was after seven o’clock, so they found boarding at a farm house in the pine woods. Their hosts were three brothers and two wives, all of them living together in the same house and raising cotton, corn, and hogs for their livelihood. Captain Hill was taken aback by the leanness of their condition, commenting that “their prospects of a life of drudgery, delving in the soil for a mere existence were not hopeful.”[76] For amenities they had only a tin wash bowl on a bench, “and candles were unknown.” The supper they offered their guests was a mean country meal of salt meat, corn bread, and molasses. The one luxury in sight, a feather bed, they turned over to their guests, three of the family sleeping instead on the bare boards. “Their hospitality,” wrote Hill, ”was generosity itself.” After supper, they all sat and talked by the fire. Picturing them together, the three wealthy gentlemen from New Orleans and this little family of hard-scrabble country famers, it is difficult to imagine what they talked about. Each group must have been equally nonplussed. “We shall never forget these people,”[77] remarked Hill.

In the morning the cyclists set out again to push their bicycles through the “horrible, unrideable sand.”[78] By eleven o’clock they were so exhausted that they gave up and stretched out in the grass under the shade of a large, spreading oak and fell asleep in the mid-day heat. They awoke to find a local staring gape-mouthed at them and their machines. At that point they hired a farmer to haul them into the town of Troy. It was there that they were met by a cyclist from Columbus who’d come out to escort them as far as Atlanta.—the much-admired Mr. Tom Ingram, president of the Columbus Cycling Club.[79]

Astride lofty wheels: Time to talk about Tom – Via Nola Vie
Recent Posts on ViaNolaVie
Donate to ViaNolaVie!     GIVE BACK TO THE NEW ORLEANS PUBLICATION THAT’S ALWAYS GIVING!  ViaNolaVie,...