Astride lofty wheels (part I): The telling of the bicycle in New Orleans 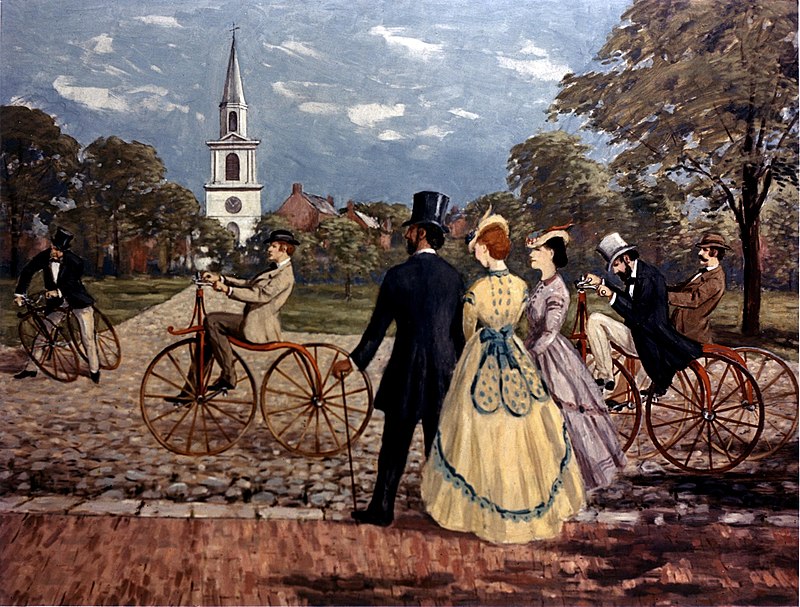 “Captain” Hill’s feet throbbed, and his head was growing light. He slumped beside a gaping hearth, along with his two young companions. The fire roared and snapped, the heat slowly cracking through the dampness in their wool stockings. If any of them were entertaining ideas of going home, all remained silent on such thoughts. This was only the first day.

They had traveled just fifty miles, tramping along the railroad tracks most of the way. Their legs ached. The fire hissed. Thunder crashed. Outside the cabin, rain pelted the brown sand beach. Flashes of lightning lit up the black sky over the Gulf of Mexico and the coastal hamlet of Waveland, Mississippi.

At nine o’clock that evening, the owner of the cabin, Mr. T. Beck had, to his surprise, opened his door to find standing there, panting and muddy, three athletic-looking but bedraggled men wearing muddy shoes and soggy knee britches, water dripping from the brims of their caps.[1] The gentleman might have taken the three for vagrants or criminals of some kind had it not been for their patrician grooming and the fact that each stood clutching a recently-shiny but now completely mud-caked symbol of his social privilege—a high-mount bicycle. These were men, understood Mr. Beck, whose misfortunes were recent. Actually, although he had not been expecting to greet the three of them at his front door that evening, he’d heard of them and immediately realized who they must be.[2] He had gladly extended his hospitality, inviting them in and busying his son preparing them a supper.

Being now at least not starving, the men were huddled around the fire recounting the tales of their day to their hosts when suddenly, A.M. Hill, prominent businessman and accomplished athlete, fainted for the first time in his thirty-eight years of life.[3]

That day, Easter Sunday 1886, had started out in New Orleans as a cloudy but mild spring morning. Shortly after sunrise services, a crowd of curious citizens and well wishers gathered outside the jewelry store at the corner of St. Charles Avenue and the famously-broad shopping boulevard of Canal Street. The crowd had increased to at least a hundred by 5:30 am, according to a local reporter, when the owner of the store, A.M. Hill, emerged from inside dressed in a neat riding outfit of brown shirt, corduroy knee britches, and brown wool stockings, the official uniform of the League of American Wheelmen. Soon after, Charlie Fairchild, Hill’s twenty-one-year-old employee, arrived beaming with excitement, wearing a blue flannel riding suit, his pistol pocket stuffed with a pocketbook, a toothbrush, a comb, and a bottle of cologne. From his shirt pocket dangled a watch. As the minutes ticked to the appointed hour, the two men, along with the crowd, began to grow anxious. They were waiting for a third man, Harry Fairfax, and were beginning to think he wouldn’t show.[4]

Outside the door of Hill’s jewelry store, under the sweeping iron-work balcony at the edge of the French Quarter, leaned two bicycles: Hill’s 51-inch Columbia Roadster, built in Boston, and Fairchild’s 53-inch Rudge Light Roadster, imported from Coventry, England — each the acme of bicycle technology of the time.

The machines were outfitted with all the latest road gear. To the handlebars of each was strapped a traveling bag — a bundle of oiled cloth fifteen by eight inches, weighing about twelve pounds, containing all they hoped they’d need for the next month: an extra suit of underwear, a pair of short pants, silk stockings and light shoes for the evenings, a rubber rain coat, an old bed sheet to be torn up for bandages and handkerchiefs, needles and thread, and toiletries including a toothbrush, a comb, a bottle of Pond’s Extract, and plenty of bandaging plaster, of which they would be needing more than they suspected.[5]

The two bicycles each consisted of one big front wheel over four feet in diameter, trailed by a much smaller one. A rotary pedal crank was fixed to the axel of the front wheel, with the handle bars attached by a rod running directly vertical from the crank. From the handle bars, the frame, or “backbone,” arched steeply down to the fork of the relatively tiny back wheel. The tires of the roadsters were skinny, seven-eighths to three-quarters of an inch. Attached to the hollow metal rims, or “felloes,” with cement, the solid rubber tires were meant to be replaceable by the rider, if necessary. Bolted to the frame, just behind the handlebars and at the eleven o’clock position on the arch of the large wheel, was a small leather saddle supported by a spring.[6]

Standing beside the machine, each man would have met the saddle at about shoulder height. A slang term for the bicycle at the time was “shadow steed,” and getting one going was a bit like mounting a moving horse. Near the bottom of the frame was attached an adjustable step. The rider would run along beside the wheel with one hand on the saddle and one on the handle bars and then, in one swift motion, mount the step, swing his other leg over the saddle, and—so he hoped—get his feet onto the pedals in time to crank the wheel and keep the machine in motion before it fell over.

Despite the learning curve and agility involved in mounting and dismounting, this design for the bicycle was for many years considered to be the most practical, and in fact the only truly viable, design for a two-wheeled vehicle of human-powered locomotion. The high-mount design, often referred to as the “penny farthing” (due to the smaller wheel’s resemblance to a small coin next to the larger one), was developed and became popular in Europe in the 1870s. The previously popular design had been the “boneshaker.”

Developed as the first pedal-crank two-wheeler in the 1860s, the bonekshaker had wheels of roughly equal size, with the pedal crank attached directly to the front wheel. The rattling nature of the vehicle’s iron frame on its wooden wheels earned its nickname. This bicycle became a fad for the rich when it was first marketed, but the general public soon found it too impractical and awkward to ride and abandoned it, leaving cycling to a small group of dedicated enthusiasts.

In the 1870s new technology in wheel design, including hollow rims and thin metal spokes, allowed bicycle-makers to increase the size of the front wheels while retaining strength.[7] The increased size of the wheel meant greater torque, resulting in faster speeds. Later came the innovations of lighter frames and rubber tires. With these technological improvements, bicycles could attain clips rivaling that of a trotting horse. Competitions being held between horses and wheelmen demonstrated as much to the public. Provided road conditions were smooth enough, an experienced rider could sail along with casual pleasure for miles.

Astride Lofty Wheels | Shadow Steeds in the Crescent City
07:46

Astride lofty wheels: Time to talk about Tom – Via Nola Vie
01:00

Astride lofty wheels (part VII): The kindness of neighbors – Via Nola Vie
09:53

Astride lofty wheels: When the great idea feels awful – Via Nola Vie
01:01

Astride lofty wheels (part III): The jewel of the New Orleans Bicycle Club – Via Nola Vie
07:32

[…] Get your spokes in gear by reading part I of this series: Astride lofty wheels (part I): The telling of the bicycle in New Orleans […]

Astride lofty wheels (part II): The athletes of “danger” – Via Nola Vie
Recent Posts on ViaNolaVie
Donate to ViaNolaVie!     GIVE BACK TO THE NEW ORLEANS PUBLICATION THAT’S ALWAYS GIVING!  ViaNolaVie,...