Astride lofty wheels (VIX): The privilege of dropping out 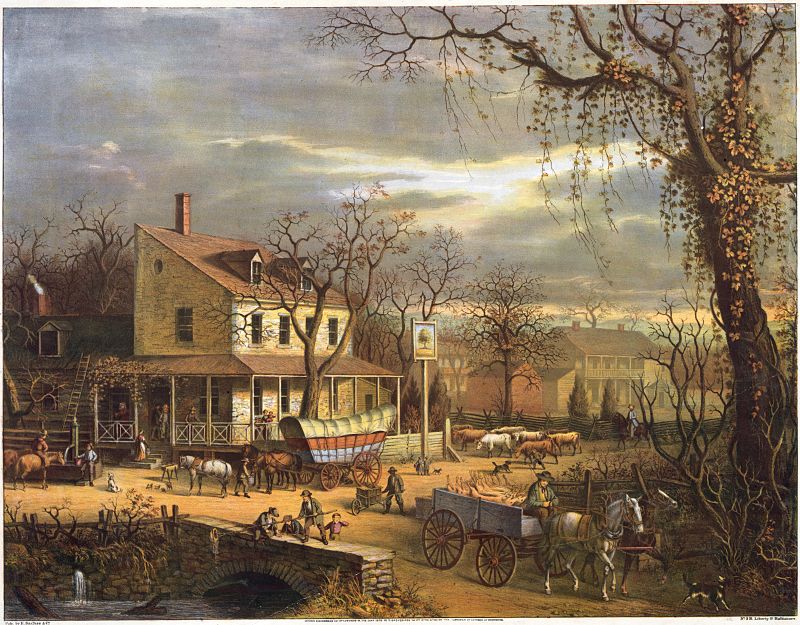 Roadside in America, scenes the men set out to see (Photo: Wiki Commons)

Get your spokes aligned by reading parts I-VIII of “Astride Lofty Wheels.”

The travelers continued to meet bad roads and knee-deep mud, but in their new-found toughness they began to take the adversities of the road in stride, seeming to revel in their rough condition, perhaps feeling liberated. What they were expecting, when they started out on the journey, was the pleasure of cycling, the leisurely taking in of scenery, and the glory of accomplishing their feat. What they discovered, once they’d gotten used to it, was the strange joy of voluntary hardship, the kind of pride that comes from getting used to pain and discomfort and finally failing to give a damn about one’s outward appearance. In this way they were a sort of precursor the modern-day credit-card carrying “gutter punk”— at least that is exactly what they would have looked like. (Actually in one town, to their great amusement, they were taken for travelers with Barnum’s Circus.)[96]

Their social privilege allowed them the luxury of escaping the normal expectations of polite society while still benefiting from it. For, despite their appearance, they were treated all the same with respect wherever they went. They may have looked like tramps, but they could afford nice meals and warm places to sleep, and they were not social outcasts but heroes, greeted by cheering crowds as they rode from town to town.

By May 15, they had made it to Lynchburg, Virginia, from which they rode through the mountains into Shenandoah Valley. Here as they approached the Mason-Dixon line they came into the historically-industrialized part of the country. They passed the abandoned locks and dams of a now out-of-use transportation canal.[97] Road development here was far more congenial to bicycle travel. In fact the Shenandoah Valley was famed among American cyclists as possibly the best riding in the country.

At Lexington they entered a toll road, which was hilly but so smooth at times as to seem sandpapered. Finally they had a chance to sustain some real speed, coasting down hills wide open and full of confidence. Six miles along the road, though, Captain Hill and Harry turned around to look for Charlie and spotted him on the previous hill, staggering in the road and bleeding from the head, having taken what Hill called “a most unaccountable header.” He must have suffered a pretty spectacular tumble. It took thirty minutes to revive him, pouring water from a nearby stream over his head. He probably had a concussion, and in the modern day of medical caution would have been strapped into a neck brace and taken in for x-rays. But the only concern Captain Hill had for Charlie was how to get him back on the wheel, as he was reluctant and trembling with fear. They managed to coax him into it eventually. “Riding slowly,” wrote Hill, “he gradually came to a good form, and we were soon doing twelve miles an hour again.”[98]

An hour later the teenage Harry was the next to go off the wheel, making a sharp turn to avoid a horse and buggy coming unexpectedly out of a barn at the foot of a hill. He managed to escape injury through spry and speedy dismount, but one of his handlebars was badly wrenched. They were able to bend the handle bar back into place and get going again but, following their mishaps, the two young riders were content to slow down the pace some. Captain Hill was having none of that. He had a fire in him to take advantage of the prime riding conditions and make as much mileage as possible. Leaving his companions behind he rode at top speed, spotting the other two for the last time two hills behind him. Also behind him was a dark storm coming over the mountains, and he pedaled hard to out-race it. An hour after he first spotted the clouds in the distance, torrential rain and hail caught up with him. After thirty minutes of that he gave up and stopped at the town of Woodstock, where the other two showed up forty-five minutes later, wet and muddy. Hill’s insistence on such a furious pace paid off. That day the three of them had cycled 106 miles, making them the first riders from the New Orleans Bicycle club to complete a “century.”[99]

In a couple of days the southern tourists rode across the Mason-Dixon line, having their coffee in West Virginia, breakfast in Maryland, and supper in embattled Gettysburg, Pennsylvania. Over the next week they met with considerably more favorable road conditions in the industrially-developed Northeast. Entering the part of the country where he’d grown up, Captain Hill found much to admire. “We had now entered a section of country that appeared to be very prosperous. Every acre was under cultivation . . . Such is the industry of the land that the dwellers all appear to be wealthy.”[100] In Trenton, New Jersey, the travelers were entertained by the local bicycle club and, for the first time on their journey, got drunk, reveling that night with their cohorts until the late hour of twelve o’clock. In New York City, where cycling clubs were numerous, they found to their pleasure that the streetcars were prepared to carry bicycles. As they neared Boston the roads became smoother and smoother, and they were joined by other riders come out to escort them on the final triumphant miles of their long tour.[101]

On the evening of May 24, twenty-nine days after they had set off from Washington Square, the three cyclists of the New Orleans Bicycle Club rode into Boston and registered as guests at the clubhouse of the Massachusetts Cycling Club, the oldest cycling club in the country. Hill wired a special telegram back to the Daily Picayune, reporting that they had arrived on time, having ridden eighty-five miles that day. They had, according to their estimation, wheeled 1,237 miles, walked 329, and gone 218 by rail. They didn’t show in the competitions of the LAW meet, but their bicycles were put up on display, and for the next few days they enjoyed the congratulations of their fellow cyclists while recounting the tales of rain, heat, flood, and crashes. Their tour had set no records, apart from their being the first southern wheelmen to make such a trip,[102] but as a a group from New Orleans they would have made an entertaining lot of story tellers. The thing about traveling tales is that mishaps make for the best stories, and they must have been at least a little glad, now that it was all over, that they had so many to tell.

When they returned home to New Orleans, by rail, their friends held a grand reception banquet at Astredo’s, a restaurant at the lakeside resort spot of the West End. That night the wine flowed late into the evening as their friends presented the riders with gold medals and made speeches in their honor.[103] Although their accomplishment was overshadowed in the national scene by grander tours of other cyclists, Captain Hill, Charlie Fairchild, and Harry Fairfax would for some time be celebrated in New Orleans and the cycling world of the South, which would host its first national LAW meet the following year, in St. Louis. In the end, the delegation from the NOBC did not prove that one could easily travel across the South by bicycle. They had demonstrated quite the opposite, in fact, and it is doubtful that they regaled their friends with stories about how easy the riding was.

In any case, despite a lot of talk about it, no one from New Orleans went out on such a tour again anytime soon. But they had proven their own grit in pulling the tour off, and also that the obstacles involved were no match for their pride, no matter how many falls came after.

[102] Karl Kron later noted their feat, in an addendum to Ten Thousand Miles on a Bicycle.