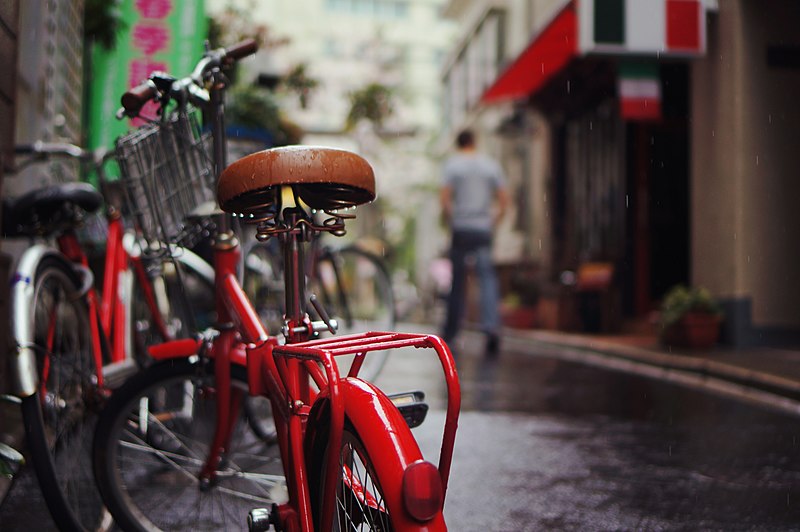 We all know that when you ride a bike in New Orleans, you’re going to get rained on. Same was true in the 19th century. (Photo: Lauren Kay Lakael)

Get your spokes aligned by reading part I, part II, part III, and part IV of Lacar Musgrove’s series “Astride Lofty Wheels.”

Several hours later, they came to a town called English Lookout, an island once used as a staging point by the British in the War of 1812, now a fishing resort.[44] Hoping for supper, they found only bread and coffee. Having traveled forty miles, walking across the trellis-work of the railroad through swamps and marshes, they took a short rest before continuing on.

As the light of day grew dim, dark clouds rolled in, the air turned cold, and a heavy rain began to blow in on the stiff winds. They pulled their rubber coats from their packs but found them no match for the wind-driven showers, and their jackets, knee britches, and stockings were soon soaked and heavy.

For the next three hours they stumbled along the railroad tracks, in such darkness that they could not see the tracks at all, falling repeatedly headlong into the ditch.[45] Only by the sound of their voices and the flashes of lightning could they find each other. Their bellies were empty, their clothes soaked, and their feet sore. They began to doubt they would reach Bay St. Louis that night. Spotting an abandoned wood house near the tracks, they talked about trying to camp there, giving up hope of warmth and food and settling for shelter and rest until the light of morning. But then, in a flash of lightning, Harry thought he could make out a group of houses in the distance.

Finding the shell road that led to the little neighborhood on the beach, the travelers pedaled swiftly toward what would be the heaven-sent hospitality of Mr. T. Beck, his dry cabin, his hot supper, his roaring fire.

Captain Hill’s faint was caused by no more than pure exhaustion. He revived quickly, but the three travelers were soon sound asleep in bed. The next morning their host rousted them from bed at nine o’clock. They rose stiff and aching from their beds, the sun already well up and precious time ticking away. The long sleep had done little for their strained muscles and nothing at all to help their mangled feet. To the stinging, bleeding blisters they applied salve and plaster. They were barely able to pull on their shoes for the swelling. Finally they sat down to a weary breakfast, and no one spoke of turning back for New Orleans.[46]

When time came to mount up again on their wheels, the cyclists were subject to a crowd gathered to get a look at the novel sight. The soreness of their bodies and painful condition of their feet hindered them, but they managed to look more spry than they felt. They had fallen only three miles short of their goal of Bay St. Louis the night before. That morning they enjoyed a “magnificent spin” over the shell road, that particular kind of road surfacing being a favorite of cyclists, next to the beloved but rare asphalt.

As the battered travelers cruised passed the elegant coastal cottages and fruit orchards of what was then a resort town (they might have gotten there by train from New Orleans in an hour, as many did at that time of year) their spirits lifted.[47] They must have experienced that brief euphoria of the suffering traveler when, after some exhausting ordeal, things begin to go well again and you remember why it was that you left home. This was the kind of traveling they had set out to do. They planned to make it to Mobile the next day where they looked forward to being greeted by the local wheelmen of that city who, as their friends back home, were no doubt seething with envy and admiration.

The nineteen-year-old Harry, the one no one thought could make the trip, must have sailed along with a little self-satisfied smile playing on his face as he thought about all he’d tell the girls when he got back home. Perhaps they’d only had bad luck the first day, getting out of the swamp surrounding New Orleans. But the roads ahead would not be kind, and neither would the weather.

Reaching Bay St. Louis, on the coast of the Gulf of Mexico and the edge of the Bay of St. Louis, the cyclists would have to cross the water over the railroad bridge, which was two and a half miles long. The bridge was not meant for pedestrian traffic, but the bridge keeper gave no objection to their crossing. As they would with many other long bridge crossings, they inquired with the bridge keeper regarding the timetable of the trains to be sure not to meet one, since there would be no where to go to get out of the way. They would also, if they could not see the other side of the bridge and were uncertain about when a train might come, lay their ears to the steel of the track, believing they would be able to hear a train coming from several miles away.

To get across the bridge they had to step along the ties, which were six inches apart, while holding their bicycles by the handle bars and the steps near the bottom of the frame, rolling the large wheel along the ties.

By this method they made it across in one hour and five minutes.

Each man rolled about fifty pounds of gear along in this awkward way, stepping between cross ties with aching muscles and tender feet. Still, after the misery of the previous evening, the task seemed relatively easy. They managed to make it across the bridge before the rain again came down in torrents. They spent the rest of the day first getting lost in a swamp looking for a shell road on the spurious direction of a local, then trekking on foot along the coast through what turned out to be not so much a shell road as a stretch of mud graced with the occasional shell all the way to a hotel in Mississippi City, where they stopped for supper and bed.[48]

Telegrams had been sent ahead to newspapers in cities all along the way announcing the tour. Arriving in Biloxi on the third day of their trip, the travelers were for the first time greeted by a crowd that had been anticipating them. The townspeople presented them with bouquets of flowers which the riders, with some regret, fired off into the bay before crossing the bridge.

It was on that bridge that the cyclists discovered the deficiency in their method of putting ear to track to determine whether a train was coming. As the engine of the L&N came thundering toward them and the ties shuddered under their feet, the three rather alarmed men contemplated the potential merits of a swim. Instead, they each scrambled for a telegraph pole, spaced two hundred feet apart along the track, “leaned his wheel against it, and then hugged for dear life.”[49]

By this third day all three of them wanted badly to go home. Rather than enjoying hours of cycling bliss, they found they had to walk most of the time and “every step taken was positive torture.”[50] They might have turned back if they’d known how little conditions would improve. To add to the misery of inadequate roads, an unusually wet spring would not only drench them regularly but had swelled the creeks and rivers.

When there were no bridges, and often there were not, the travelers caught all hell in crossing the bloated streams. Often the men would ford creeks stripped naked to the waist and holding their wheels and clothes above their heads. At other times the water was too high for that. Charlie, being elected the best swimmer, was sent out to test the depths of the rushing waters. At times they were forced to wait for locals passing by with boats, horses, or steers, and prevail upon them to help them cross.

As miserable as they were, turning back was not a discussion. Having boasted in advance to not only their friends and the city of New Orleans but to newspapers in cities all over the country, they “did not dare,” as Hill put it. They had, he lamented, “given out that it was as easy to go to Boston by wheel as any other way!”[51] All of their friends and, at their beseeching, the whole world of cycling had their eyes on them.

Pride cometh before a fall, indeed, and to save their pride there were no number of falls that would not be endured. Had they gone home they would never have lived down the failure, they feared, all the more because they wouldn’t be able to claim that it was simply not possible to cross the South by bicycle. That was because there was another rider out there not only proving the feat possible but all the while cheekily predicting they themselves couldn’t manage it.