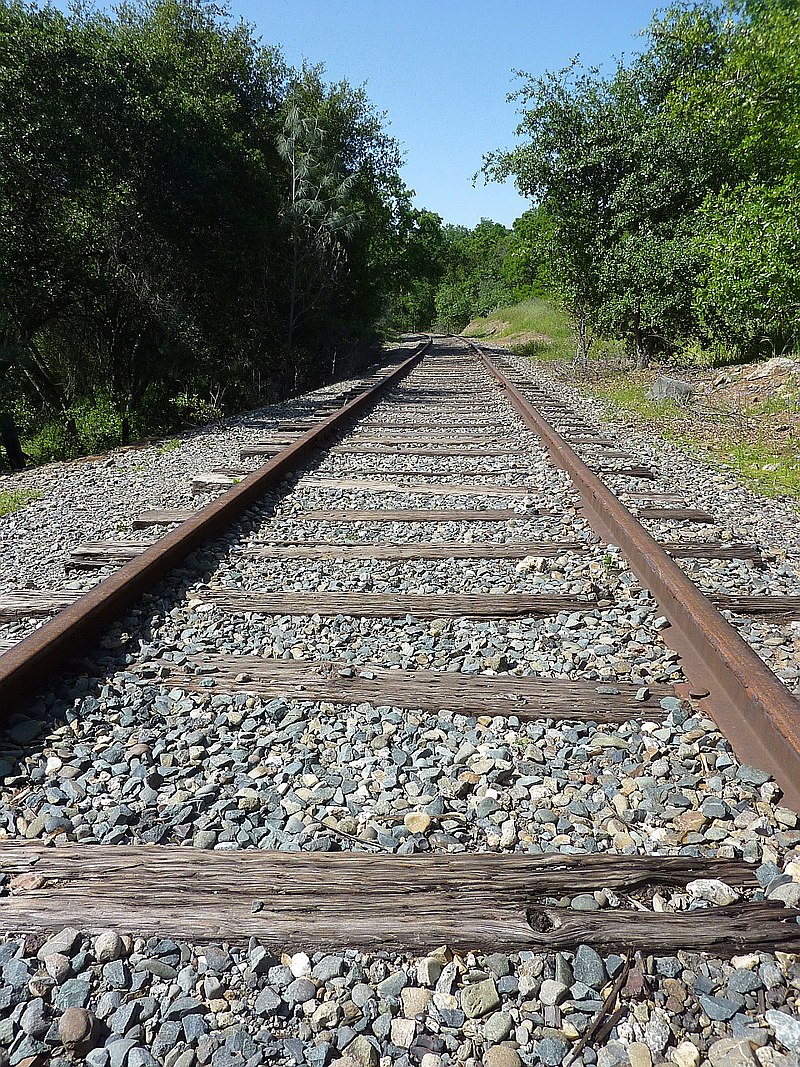 Railroad tracks were a great way to travel on bike. (Photo: Wiki Commons)

Get your spokes aligned by reading part I, part II, and part III of this series “Astride Lofty Wheels.”

Despite the demonstrations of the long-distance bicycle tourists of the time, to travel America by bicycle in the 1880s was a daunting proposition, and it would have been even riding a modern-day mountain bike. To ride one of those high-mount models even now, with paved roads and reliable maps, would be a feat worth noting. But, in the 1880s, when bicycles required decently solid ground to be useable at all, roads outside of the Northeast were notoriously un-solid. This was true especially in the South, where railroads were only newly coming to replace waterways as primary inter-city transportation. The movement of goods and people between cities was done either by boat or rail. Wagon roads between cities and towns either did not exist or were barely passable. Still, these three bicycle enthusiasts, led by Captain Hill, were out to prove to New Orleanians of little faith that it was “as easy to go to Boston by wheel as any other way.”[31] Adding to the challenge, they resolved to make the trip of fifteen hundred miles in thirty days.

The riders advertised the kick off of their great tour at exactly 6 o’clock on the morning of April 25. Outside of Hill’s jewelry store on Canal Street, that hour was drawing swiftly near with no sign of Harry Fairfax. Charlie Fairchild and Captain Hill had good reason to fear he wouldn’t show for the adventure after all. Hill, though nearly forty, was an all-around sportsman and in fit condition. He’d been preparing for this ride for some months, making long tours in the vicinity of the city and working out at the gym. He was no stranger to long distance cycling, as he reminded the crowd by appearing that morning wearing a big peaked straw hat, one side turned up and a cluster of feathers at the top, an emblem of the “Big Four” touring club.[32] Charlie Fairchild was a young athlete, twenty-three years old, and had reportedly been getting some riding in as well. Still, in Hill’s estimation he didn’t really seem in shape for the feat when the morning came. But Harry Fairfax, a reporter for the Daily Item, was only nineteen and had been riding for just three months.[33] His ambition was of the blue-blood variety. He was the son of John Wheeler Fairfax, a well-known financial broker and part owner of the newspaper, the Daily Item, Harry wrote for. On his mother’s side, Harry was a descendant of the family of George Washington.[34] Whether despite or because of the luxury of his social milieu, Harry Fairfax had a mind to hit the road. Just as the clock was striking 6 o’clock, the “handsome boy-rider,” as the paper called him, appeared pushing his new Rudge Light Roadster up Canal Street, accompanied by his parents and a party of young women.[35]

The assembled three now headed down the broad avenue of Canal Street towards the Mississippi River, where they turned left and proceeded up Decatur Street toward Elysian Fields Avenue. Wishing to avoid riding on the cobble stones of the French Quarter, the oldest part of the city, the cyclists walked their bicycles along Decatur Street through the market district. To their right were the wharfs along the Mississippi River, where steamships docked — packed with produce to be sold in the markets — and riverboats waited — full of cotton to be bailed in the cotton presses and shipped across the Atlantic to Liverpool. Followed by a crowd of fifty admirers, and gazed upon by throngs of longshoremen and market merchants and their wives and children crowding the street in that early morning, the gentlemen pushed their wheels alongside the heaps of produce and coffee stands and dry-goods stalls presided over by the mostly-Italian merchants, who came out to cheer the heroes of the hour, waving their dark arms in the air or extending them to offer the lucky adventurers lunches to take along. At Washington Square, on the very edge of town, Captain Hill, Charlie Fairchild, and Harry Fairfax paused for another round of hand-shaking and well-wishing, basking in the envy of their friends and offering such reassurances as they could as to their safety, even as a curious and doubtful crowd of onlookers wagered against the likelihood of their return.[36]

At 6:30 am, Captain Hill threw his leg over the saddle of his wheel and led the party out of Washington Square and up Elysian Fields Avenue where the train tracks of the L & N Railroad branched off into the swamp.[37] They were accompanied that far by a reporter from the Daily Picayune, which, later that summer, would publish a full account of the adventure taken from Captain Hill’s journal. There the three cyclists shook hands again with the riders of the city who’d come to escort them that far and after the final, reluctant good-byes, they were off in earnest, riding the tracks, leaving the city behind them, and hoping to make it as far as Bay St. Louis, Mississippi, fifty miles hence, that day. They planned to reach Mobile, Alabama, one hundred fifty miles east along the Gulf shore, in three days.[38] No one had as yet attempted to bicycle even that far.

Following the railroad tracks was a key strategy of travel for bicycle tourists of the time. It is often noted that the bicyclists of the late 19th Century literally paved the way for the rise of the automobile by advocating for the improvement of urban and inter-city roads. But in the 1880s, it was the railroad that made riding long distances across the United States possible for cyclists. When roads were too poor or non-existent, bicycle travelers took advantage of the railroad tracks, either riding the paths along-side them when they existed or bumping along the ties themselves. Out West, Thomas Stevens had ridden the railroad tracks through the snow-covered peaks of the Rocky Mountains, taking advantage of the snow sheds over the tracks of the Central Pacific Railway to make a passage through the mountains no one thought possible. To ride the tracks, however, sometimes proved hazardous — when the train itself appeared, that is. Thomas Stevens recounts his encounter with a train as he was making his way through the dark, smoky tunnels at the summit of the Sierras, in which “groping one’s way with a bicycle over the rough surface is anything but pleasant going . . .

But there is nothing so bad, it seems, but that it can’t get a great deal worse; and before getting far, I hear an approaching train and forthwith proceed to occupy as small an amount of space as possible against the side, while three laboriously puffing engines, tugging a long, heavy freight train up the steep grade, go past. These three puffing, smoke-emitting monsters fill every nook and corner of the tunnel with dense smoke, which creates a darkness by the side of which the natural darkness of the tunnel is daylight in comparison. Here is a darkness that can be felt; I have to grope my way forward, inch by inch; afraid to set my foot down until I have felt the place, for fear of blundering into a culvert; at the same time never knowing whether there is room, just where I am, to get out the way of a train.”[39]

As the riders from New Orleans made their way out of the city at the start of their journey, they found that so long as the ties were well-ballasted they were able to get along fairly well by riding across them. Only a few miles out of town, however, they came to loosely ballasted tracks in no shape for riding, and the ride quickly devolved into a walking ordeal of many hours. Poor Harry, the rider of only three months, was the first to meet with misfortune by taking two terrible “headers” almost right away. Only fifteen miles out, at Michaud, the party had to stop as Harry was “in a state of collapse.” With thirty minutes rest and two glasses of milk he was revived. Hill, if he hadn’t before, now had very serious doubts about the inexperienced traveler’s prospects for making it much farther, but Harry insisted on continuing. On they pushed, conceding—due to the condition of the ties and absence of any path along the tracks–to walk most of the time. When they reached the point that Gentilly Road paralleled the tracks they attempted to ride it but found the conditions of the rural wagon road hardly recommended it over the cross ties.[40]

Leaving the farms and old sugar plantations of Gentilly Ridge, they entered their second stretch of swamp, “where cypress trees tower aloft straight as an arrow, supporting their dome of dark green foliage, looped and festooned with gray Spanish moss.”[41] The air was dank and heavy, and in the dark pools of water alligators lurked amid “the hairy trunks of the palmetto.” Past the swamp the land opened up into expanses of marsh grass crisscrossed with bayous and splotched with lagoons, “where rafts of lotus leaves and lillies float lazily.”[42] With the first five and a half hours of the journey passed mostly in walking, they reached Chef Menteur, twenty miles from New Orleans. They were starving. At a restaurant there they gobbled down the first of many meals the quantity of which would astound both themselves and those who provided them along the way. Captain Hill ate four fish, the bruised-up and nearly outdone Harry ate six, and Charlie ate twelve. In addition to the nearly two-dozen fish, the travelers put down a good bit of ham, bread, butter, and coffee, as well as a bottle of beer each. Their solid meal put them back in good spirits and they set off again under gray skies, determined to make it to Bay St. Louis, another thirty miles away, that night.[43]

[39] Thomas Stevens. Around the World on a Bicycle – Volume 1 From San Francisco to Teheran (C. Scribner’s Sons, 1889) Chapter I, Kindle Edition.

Astride lofty wheels (part V): When the great idea feels awful – Via Nola Vie
Recent Posts on ViaNolaVie
Footprints: An interactive public art map Kelley Crawford, Steven Melendez, and Emma Fick worked together to create a custom interactive public art map for New Orleans. This project was made possible through a grant provided by EPNO (Emerging Philanthropists of New Orleans)! Take a walk and click away!