Astride lofty wheels (part II): The athletes of “danger” 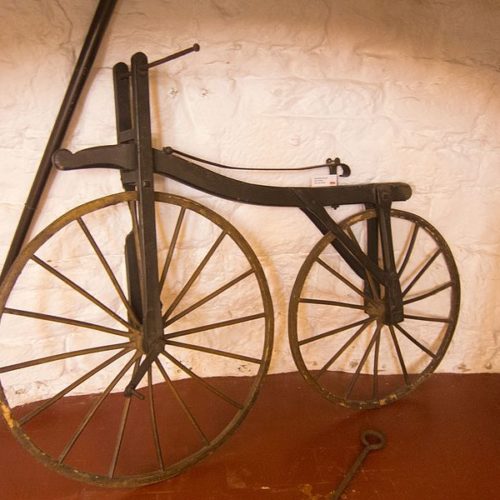 The early bicycle; for those with adventurous hearts. (Photo: Thomas Quine)

Get your spokes aligned by reading part I of this series: Astride lofty wheels (part I): The telling of the bicycle in New Orleans

In the spring of 1876, an Englishman named David Stanton showed up in New York with two of the new machines, Keen’s Eclipse models, in tow. After a few weeks of traveling around giving demonstrations, Stanton returned to England with plenty of orders, despite the high markup for shipping and tariffs.[8]

In 1878, Albert Pope secured patents and began manufacturing the machines in Boston under the name Columbia, becoming the first mass manufacturer of high-mount bicycles in the United States. After the short-lived boneshaker craze of the 1860s, Americans had forgotten all about the bicycle. But without import costs these new, far-better bicycles became cheap enough to quickly increase in popularity in the American market.[9]

By the 1880s, the United States was experiencing its second bicycle craze. All major cities and a good many smaller ones saw the formation of bicycle clubs. These social organizations put on group rides for members as well as races and exhibitions for the delight of the public. They held road races, track races, trick-riding shows, and, as mentioned, races between cyclists and horses. Itinerant bicyclists drew crowds at arenas in cities all over the country. The bicycle, alongside horse racing and baseball, rose as mass entertainment. By 1883 most large cities had tracks for bicycle racing at their fair grounds.[10] Newspapers reported not only the details of local races but the records and feats of cyclists from around the country.

Cycling champions, such as L.D. Munger, S.G. Whittaker, and A.A. McCurdy, were household names in the way that the professional football quarterbacks are now. Women riders such as Louise Armaindo and Elsa von Blumen also made names for themselves, racing not only against each other but against male riders and horses.[11]

Cycling enthusiasts of the 1880s regarded the bicycle as more than just an amusement. In the late nineteenth century, American society had become urbanized and industrialized. The spans of the cities were becoming too wide to be walkable. The invention of mass transit in the form of streetcars offered a solution, allowing for the further expansion of the city and the building of residential suburbs farther and farther from the city center. But the bicycle, so some believed, offered a better alternative to mass transit, a means of independent travel far cheaper than the enormous expense of a horse and carriage. Besides allowing the rider to quickly traverse expanding cities, the bicycle offered a means of escaping the crowds, noise, and filth for the solace of the country.

The bicycle clubs that popped up like mushrooms in nearly every city in America in the early 1880s sought not only mutual enjoyment of their hobby but to promote bicycling to the general public as practical, everyday transportation. So far, however, the general public was far from coming around to that idea. One reason was expense. At between $100 and $200—in today’s dollars, between $2500 and $5,000–the price of bicycles limited their enjoyment to the upper classes. They also, despite being much easier to handle than the old boneshakers, still required a moderate dose of athleticism to ride, and they were regarded as dangerous.

Injury from bicycling was so common that doctors took out advertisements to warn the public of the danger. In New Orleans, bicycle-racing programs carried advertisements for Dr. Tichenor’s, a new brand of antiseptic being marketed for the treatment of cuts and lesions. Newspapers of the day published this poem:

“Two trains collided one dreadful day, Two trains with people filled, And for many yards around the earth Was strewn with hurt and killed. They drew one body from the wreck, So gashed twas hard to tell If in that mangled form of clay A spark of life did dwell. “How do you feel? They gently asked, When he was snug in bed. “Oh I’m all right; I don’t mind this; I’m a bicycle rider,” he said.[12]

A New York Times article admitted of bicycle riding that there was “some danger and difficulty, but only enough to add zest to what would otherwise be tame.” On the difficulty of learning, the Times assured its readers, “No man under 60 is so old or so clumsy, barring only cripples, that he cannot learn in a month.”[13] The principal drawback to the bicycle in its dominant design was the danger of taking a “header.” Should a rider strike too large of an obstacle with his wheel, he was prone to pitching straight over the handle bars and meeting the ground head first. “Pride cometh before a fall but a fall cometh after contact with a large sized obstruction,” quipped a sporting magazine of the era.[14] On a downhill coast, in which the vehicles were difficult to stop even with the “spoon brakes” fitted to the front wheel, experienced riders considered it much safer to drape one’s legs over the handle bars so as to have a better chance of landing right-side-up should the wheel tip forward. “The danger,” hedged the Times on this issue, “is in inverse ratio to the rider’s caution. If he coasts down a strange hill he may get pitched into a ditch and break a bone or two. . . . But it would not, therefore, be fair to call the pastime dangerous.”[15]

Astride lofty wheels: Time to talk about Tom – Via Nola Vie
07:43

Astride lofty wheels (part VII): The kindness of neighbors – Via Nola Vie
07:26

Astride lofty wheels: When the great idea feels awful – Via Nola Vie
07:34

Astride lofty wheels (part III): The jewel of the New Orleans Bicycle Club – Via Nola Vie
Recent Posts on ViaNolaVie
Footprints: An interactive public art map Kelley Crawford, Steven Melendez, and Emma Fick worked together to create a custom interactive public art map for New Orleans. This project was made possible through a grant provided by EPNO (Emerging Philanthropists of New Orleans)! Take a walk and click away!