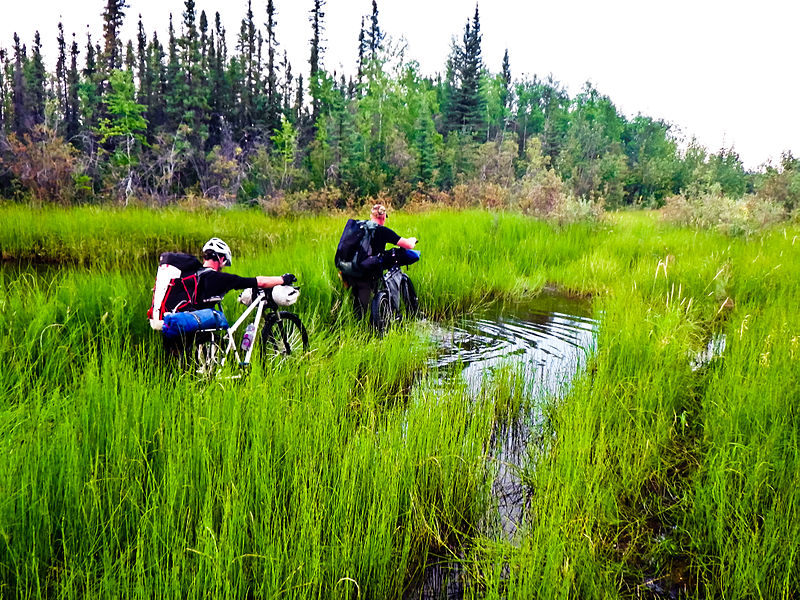 Although decades have passed, biking through the swamp in the south keeps us connected those three men who rode from New Orleans to New York in the last 19th century. (Photo: Anthony DeLorenzo)

Fred E. Van Meerbeeke, a cyclist from New York, was at that very moment crossing the U.S. from sea to shining sea—New York to San Francisco—not by the proven northern route but by way of New Orleans. In the late morning of their fourth day, Hill and friends crossed paths with this young wheelman, who had been on the road now for forty-five days.[52] They met him just west of Mobile, in Grand Bay, Alabama.

The previous day, the day of the close call with the train on the bridge, they had traveled only thirty-four miles, thirty of that by walking. Harry had sprained his ankle, and Charlie had taken a header, injuring his hip. Captain Hill’s feet were raw with blisters from heel to toe. By the time time the three met Van Meerbeke, each was distinguishing his self by what Hill called “his own peculiar and individual limp.”[53]

Van Meerbeke was small but tough, referred to repeatedly in the papers as “plucky.” He was only twenty years old and weighed 135 pounds the day he left New York.[54] He’d wagered he could make the whole trip, about 4,000 miles, in 150 days.[55] So far he’d suffered a delay of twelve days on account of the unusual rain but had not been discouraged from his goal.[56] Having already come the way they were going, Van Meerbeke scoffed at their intention to make it Boston in only another 26 days, assuring them they’d be lucky to get there in 55.

Van Meerbeke, though smaller than Captain Hill, was riding a 54-inch wheel, three sizes larger than Hill’s and one size larger than those of the other two. On full extension his toe barely reached the pedal. Hill reckoned the wheel was much too large for him, and also that he was carrying too much baggage. They wondered that he was able to manage so much equipment along the tough southern roads. After calculating his average speed of travel, the three from New Orleans reached a conclusion: “We think he walked.”[57]

Van Meerbeke, whom the Daily Picayune described as “the plucky little New York bicyclist,” reached New Orleans that Saturday, three days later.[58] He was reported to have traveled from New York to New Orleans in forty-seven days, covering 1,430 miles—walking, he said, only sixteen.[59] In New Orleans he took a rest, remaining for fifteen days in the company of the wheelmen of the city before setting off to cross the Cajun country of southwest Louisiana into Texas and the Southwest.[60]

While Van Meerbeke was predicting they would not reach Boston in thirty days, Hill and friends predicted that if Van Meerbeke made it to San Francisco alive it would only be because he allowed himself so much time.[61] In fact he did reach San Francisco that September, very much alive and with over a month to spare. The San Francisco Chronicle described him as “a frank, manly, and withal a modest young man.”[62]

On the night of their fourth day of travel the limping, soggy cyclists from New Orleans reached Mobile, having traveled the one hundred sixty miles from New Orleans mostly on foot, trudging thirty-six of their forty-one miles that day. But they held out hope for better roads to come. From Mobile their route was to turn north, away from the swampy coast toward Columbus, Georgia, where cycling had taken hold as a thriving sport. While cycling flourished in cities all over the North, the sport enjoyed significant popularity in the South in only a handful of cities, including major scenes in Columbus, New Orleans, and St. Louis (considered then as part of the South).

But southern cycling was on the rise. In 1884, the New Orleans printers E.W. Hunter and Charles Genslinger, cyclists and members of the NOBC, had begun publishing Bicycle South. By 1886, the magazine claimed 1800 subscribers.[63] Frank Munger, a famous cyclist making his way around the country that year to promote cycling, had reported to the Picayune in New Orleans that in St. Louis the bicycle had become a conventional means of transportation. “There are men in St. Louis who boast of not having worn any but knee britches in months.”[64] Thanks to the efforts of the newly formed Columbus Bicycle Club, that Georgia city had a rapidly growing cycling scene and a new half-mile bicycle track with a grandstand that could hold twenty-five hundred people.[65] That Spring, as members of the New Orleans club were on their way to the national League meet in Boston, the Columbus club was planning a multi-day regional meet for July that was all the talk of the cycling world of the South.

The hopeful travelers were looking for better roads as they left Mobile, but it turned out that after all the downpours, the roads as well as a good deal of the L&N Railroad were under water, the land between Mobile and their next destination point of Evergreen being “now almost one vast lake.”[66] So, after cleaning and overhauling their wheels, they took a train.

That night, after the regular routine of a bath and supper, Hill telegrammed back to the Daily Picayune, “Unprecedented rains and impassable roads have made wheeling and walking impossible. We arrived by train and go by wheel to Greenville tomorrow. All is well.”[67]

The cyclists started their journey the next morning again filled with optimism fueled by hopeful reports on road conditions.[68] The good roads, however, only lasted for a few miles out of town. Soon they found rough ground, sculpted into gullies by the heavy rains. The land was cut by frequent streams, and they hadn’t made it twelve miles before having to ford three of them naked to the waist.

Reaching the Sepulga River, they sent Charlie out to test its depths. He hadn’t waded out ten feet before the water was over his head. Not wanting to turn back and thereby lose time, the travelers attempted to find their way through the woods to the railroad tracks and became terribly lost, slogging through the sticky mud and fearing themselves permanently lost. They were rescued by a “friendly colored man,” who, as Hill reported, “was influenced by the sight of a silver dollar” to lead them out of their quandary and to the railroad tracks, which they rode four miles to Garland, stopping there to eat. That evening they reached Greenville, Alabama, and were there met and entertained by the only wheelman in town.[69]