New Orleans band Bag of Donuts was slated to play the French Quarter Fest last weekend – an event that draws upwards of 700,000 visitors annually. Instead, the band played a concert for an audience of two. Over Zoom.

That, for me, makes them superstars. It happened this way.

Kat Peck and her fiancé, Matt Martin, booked Bag of Donuts more than a year ago to play at their wedding, which was scheduled for this past Saturday, April 18, 2020. (Full disclosure: Kat is my youngest daughter.) They wanted all the celebratory aspects of a good New Orleans party – fun and quirky, lively and a little retro. Bag of Donuts would get them there. 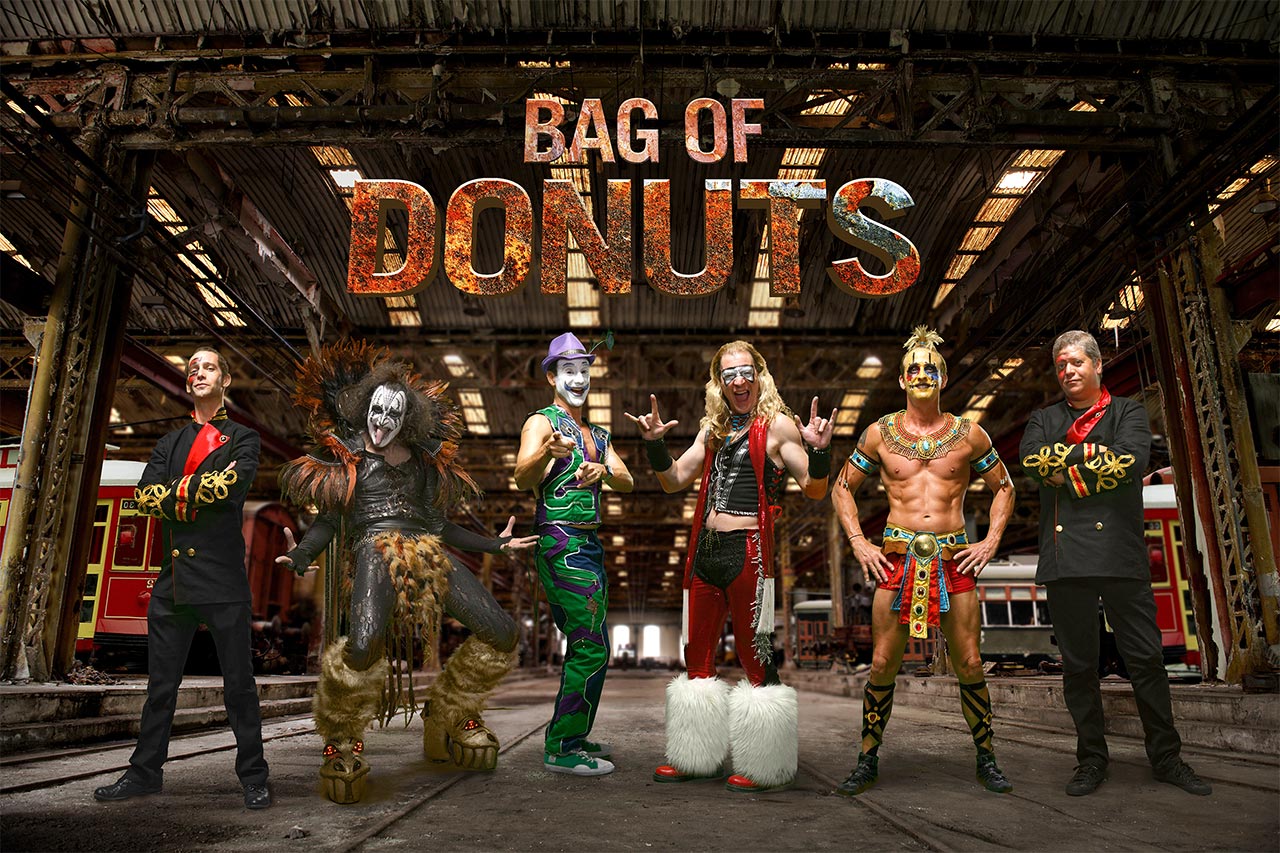 The exuberant New Orleans party band is popular, logging more than 100 performances a year from coast to coast. In 2019, they became the first cover band inducted into the Louisiana Music Hall of Fame. Audiences love their flair for flamboyance, their crazy kabuki make-up and extravagant costumes, their excellent musicianship and superpop performances, and, always, their frequent nods to the comedy gods. One query in their contract asks, simply: confetti or toilet-paper guns?

When COVID-19 put an abrupt stop to the April 18 wedding date, Kat’s sisters and friends were determined to salvage the day. It would always be the couple’s almost anniversary, after all. The bride’s two sisters, her matrons of honor, arranged a surprise Zoom for the Bride and Groom.

Could the band be rebooked for a limited engagement?

Jerry Christopher, Bag of Donuts bass player and manager, didn’t hesitate. “This is a wonderful idea,” he emailed back immediately. “I imagaine all 6 will be in.”

And they were. For the setup, Kat and Matt were asked to join a family Zoom call. Several minutes in, friends and family started “crashing” the Zoom party, one by one, five minutes apart. First Mandie called in from Paris, France, wearing her bridesmaid gown. The bride‘s 88-year-old grandmother mastered her first Zoom call from Arizona. Best man Wayne phoned in early from Manhattan, miscalculating the time difference. East and west coast bridesmaids Blaire and Marie Zoomed in together, three hours apart timewise, from New York and California. Most everyone raised Aperol Spritzes, the couple’s signature wedding cocktail. Each Zoom entry was an unexpected but personal arrival.

And then, an hour in, a new face popped up. Painted white face mask, long blond hair. “Hey, who’s there?” he asked, looking around.

Kat and Matt gasped simultaneously. Fans of Bag of Donuts and devotees of their YouTube videos, they recognized lead singer Bobby Hoerner on sight. Then up popped guitarist and vocalist Jonathan Hoerner, dressed top to toe in trademark full-face black and white skull paint and light-up platform boots, strumming his electric guitar in front of his home bar, with his two kids alongside. Next up was drummer Kevin George, top knot and glitter paint intact, who sipped champagne throughout – pausing only for rapid drum rolls on the rim and to occasionally lick the glass. Then a mask-clad Jerry “Donut” Christopher, and horn players Ian Smith and Phillip Morin, who gave up a sizzling sax solo.

Band members toasted and sipped and strummed and joked. “Where’s your trombone?” “Oh, I sold it.” “What, corona hit you hard, huh?” In between the repartee were performances of a couple of songs, sung from living rooms linked across the miles. Apart but together. 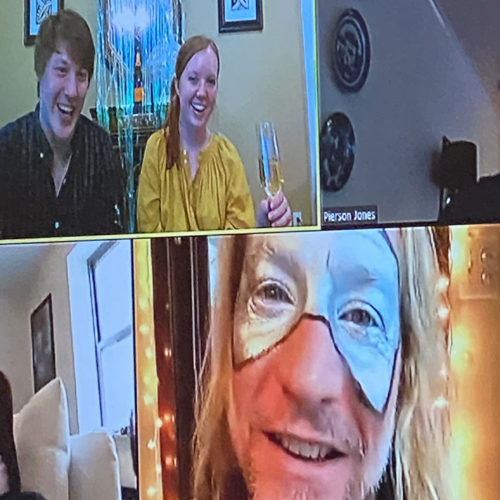 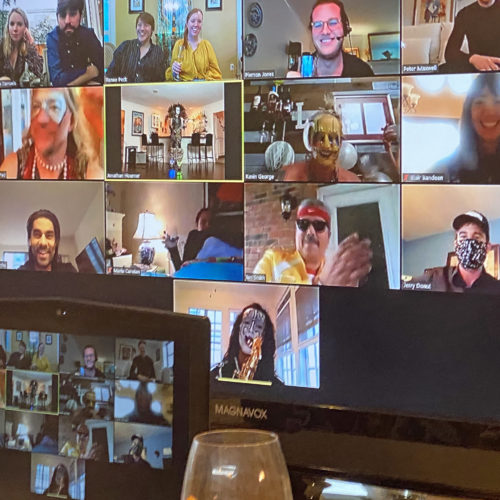 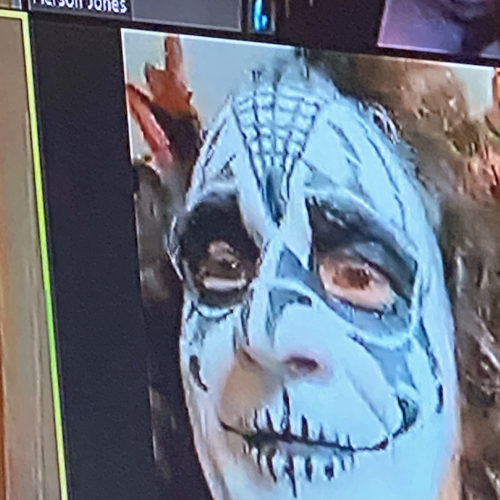 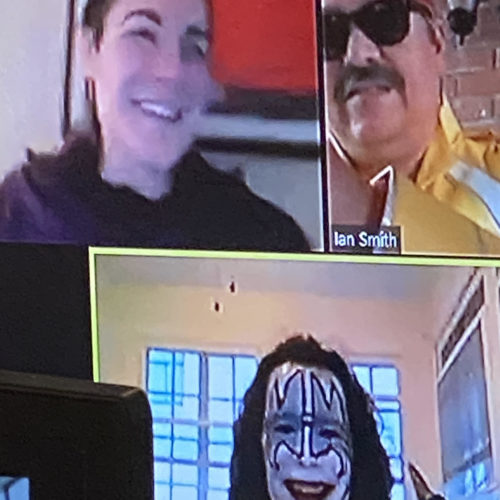 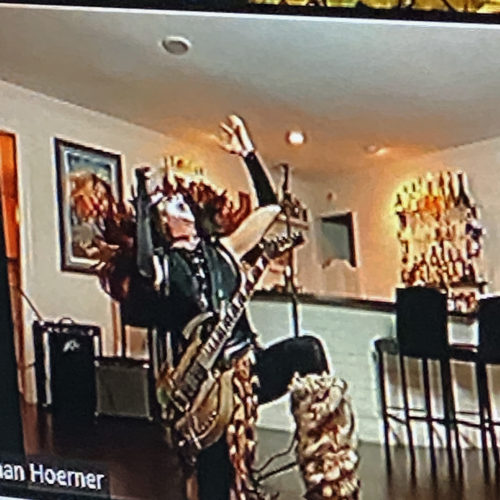 Kat and Matt will definitely have two anniversaries each year. And when the real wedding arrives, Bag of Donuts will be center stage, once again together, but this time not apart.

Over the past week, I have watched and been moved by acts of generosity and kindness, conveyances of time and talents, given by people who didn’t have to. Drew Brees donating $5 million to his city – and making Hoda Kotb cry. Zion Williamson covering the salaries of Smoothie King Center staff. Lin Manual Miranda leading the “Hamilton” cast in virtual song for a 9-year-old who missed the show.

And, closer to home, Kat and Matt’s wedding team contributed additional acts of kindness. Wedding planner Hily Trowbridge showed up early Saturday morning to decorate their front fence with balloons and flowers. Joel’s, their caterer, sent champagne and pralines. Wedding photographer Hannah Pickle texted to ask if she could come take a few photos, from a proper social distance.

None felt the need for thanks. “It’s what we do,” Jerry “Donut” said matter of factly.

It’s what they do. Share their talents and energy and good vibes and quest for a moment of happiness. Even when it involves an audience of just two.

As Bag of Donuts signs out routinely: Rock on!

[…] Katherine Peck, a native New Orleanian who was enjoying the quintessential New York life with a career in copywriting and a man she was going to marry before COVID-19 brought her home to New Orleans…with her fiancé, but without her planned wedding. […]