Susan Gisleson’s art focuses on the infinity of childhood, the illusion of memory and concepts of beauty. (photo by: Mary Rickard)

While little is happening in the present, we can still imagine the future and reflect on the past. And there’s no better place to reminisce about New Orleans’ past than at The Historic New Orleans Collection (HNOC).

HNOC’s French Quarter Galleries at 520 Royal Street is only partially open, but the free museum offers exhibitions that may be experienced in person, as well as numerous virtual events. Until March 7, the ground floor of the Tricentennial Wing features Land of Dreams, a 1,500-square-foot multimedia art installation that was designed by local artist Susan Gisleson as an expressive “love letter to a New Orleans summer.”

As a child growing up in New Orleans, Gisleson felt as if she had inherited a mythical, poetic landscape, which she endeavored to recreate through the exhibition. Creating enormous collages from vintage postcards found in HNOC’s vast digital collection to cover gallery walls, she pictured carefree, 20th-century summertimes spent outdoors in City Park, Audubon Park, Pontchartrain Beach, Lincoln Beach, the 1984 Louisiana World Exhibition and Grand Isle Tarpon Rodeo.

Gisleson selected colorful images and objects with an emphasis on a “high delight factor,” she said. For example, gum ball machines containing tiny dioramas recalling The Pennyland Arcade on Royal Street where two generations — including authors Tennessee Williams, Walker Percy and the literary character Ignatius O’Reilly — could play any of 100 games of luck and chance for just one cent apiece. Pennyland and the lakefront amusement parks, in particular, preserve many precious, childhood memories for native New Orleanians.

Gisleson explored how previous generations dealt with New Orleans’ summer heat by decorating 28 overhead parasols with palms, ferns and bamboo for “shade” and applying lotus decals to the floors for a sensation of floating on water.

On the gallery’s second floor, 22 paintings from the museum’s permanent collection, including gifts from art collector Laura Simon Nelson, depict decades of everyday life in the French Quarter. 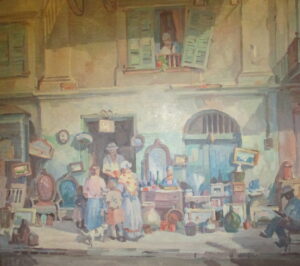 Opening Feb. 25 through June 13, Dancing in the Streets: Social Aid and Pleasure Clubs of New Orleans will ease the pain of missing the real Mardi Gras. Photographs by 12 contemporary second-line photographers, including Charles Muir Lovell, Eric Waters, Leslie Parr and Judy Cooper, will be displayed along with Mardi Gras Indian suits, elaborate baskets and fans. A companion audio guide, developed in collaboration with the Neighborhood Story Project, will feature interviews with club members discussing the objects on display.

HNOC’s virtual exhibitions on the website include: Yet She is Advancing: New Orleans Women and the Right to Vote, 1878-1970; From Daguerreotype to Digital; Cajun Document: Acadiana, 1973-74; From Cameo to Close-up: Louisiana Film; Storyville: Madams and Music and several others.

The French Quarter museum and research center was forced to close on March 14 but has broadened its capacity to engage audiences remotely. Its website catalog is fully searchable with hundreds of thousands of digitized images, as well as thousands of hours of audio and video material. HNOC has produced online resources including teaching curricula, research pathfinders, research databases, online exhibitions, a blog, First Draft, and History from Home including, stories, videos, podcasts and more.

An upcoming symposium, Recovered Voices: Black Activism in New Orleans from Reconstruction to the Present Day will be held on Zoom, March 5-7, 2021. Registration is required with a sliding-scale fee.