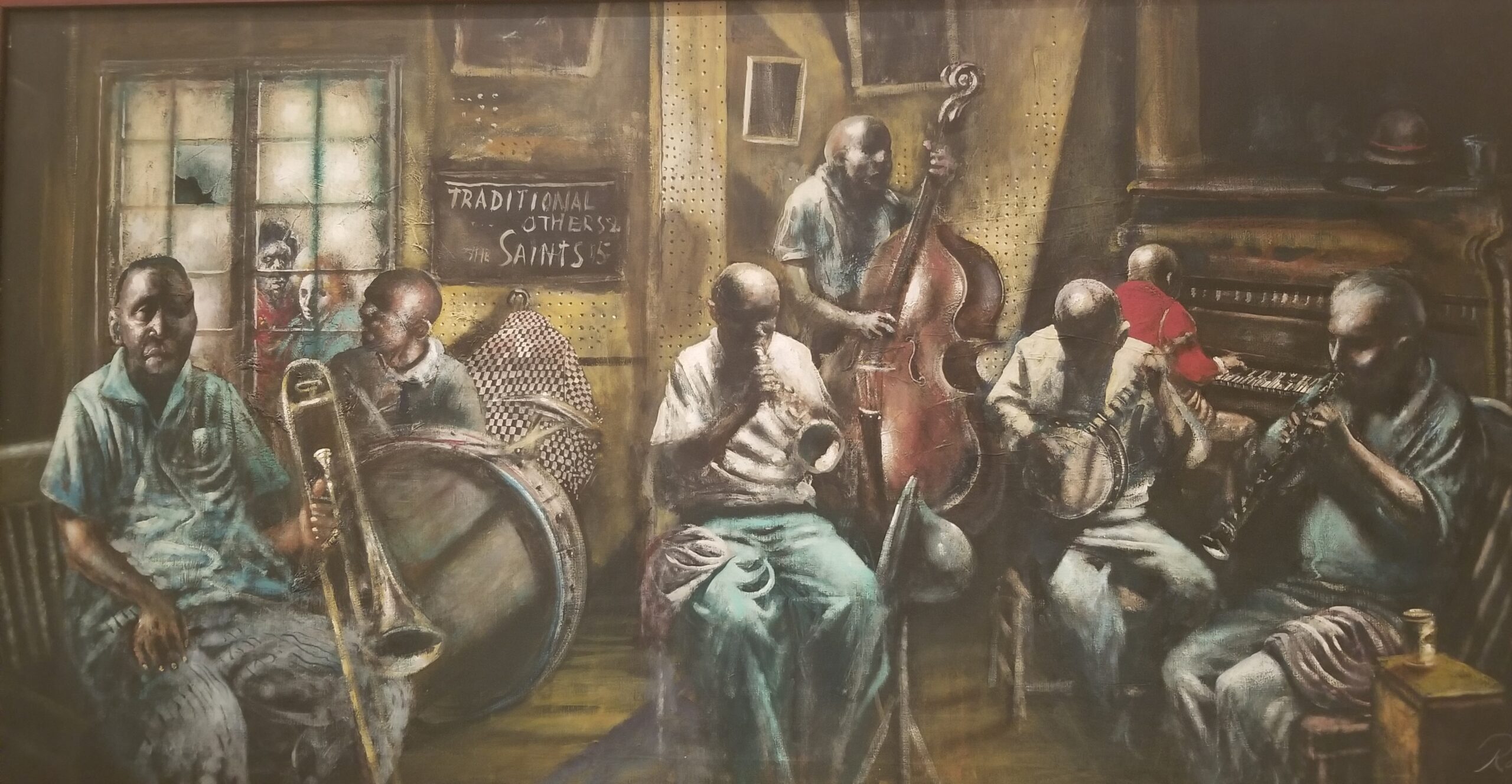 Preservation Hall’s website states that as of March 15, 2020, all performances are canceled, but we can get a sense of that hallowed hall visiting the New Orleans Jazz Museum in the Old U.S. Mint where paintings of legendary performers rendered by Noel Rockmore and his daughter Emilie Rhys are displayed. While perusing the artwork and associated paraphernalia, a playlist from the 1950s and early ‘60s lends to the exhibit’s ambiance, including tunes like “South Rampart Street Parade,” (George Lewis 1959); “In the Sweet Bye and Bye,” (Preservation Hall Jazz Band, 1962); “Memphis Blues,” (Bill Matthews, 1956); and “Pinchback Blues,” (Billie and DeDe Pierce, 1961).

Noel Rockmore (1928-1995) moved from New York City in 1959, rejecting the art world’s commercial trend toward abstract expressionism represented by Jackson Pollock, Willem De Kooning and Mark Rothko. Preferring to focus on classical portraiture, Rockmore instead chose as his subjects New Orleans’ street performers, writers, artists and traditional jazz musicians. Although several personalities in this exhibition project a certain weariness, “the musicians seem to be saying that they won’t be overlooked or mistreated,” say curators. 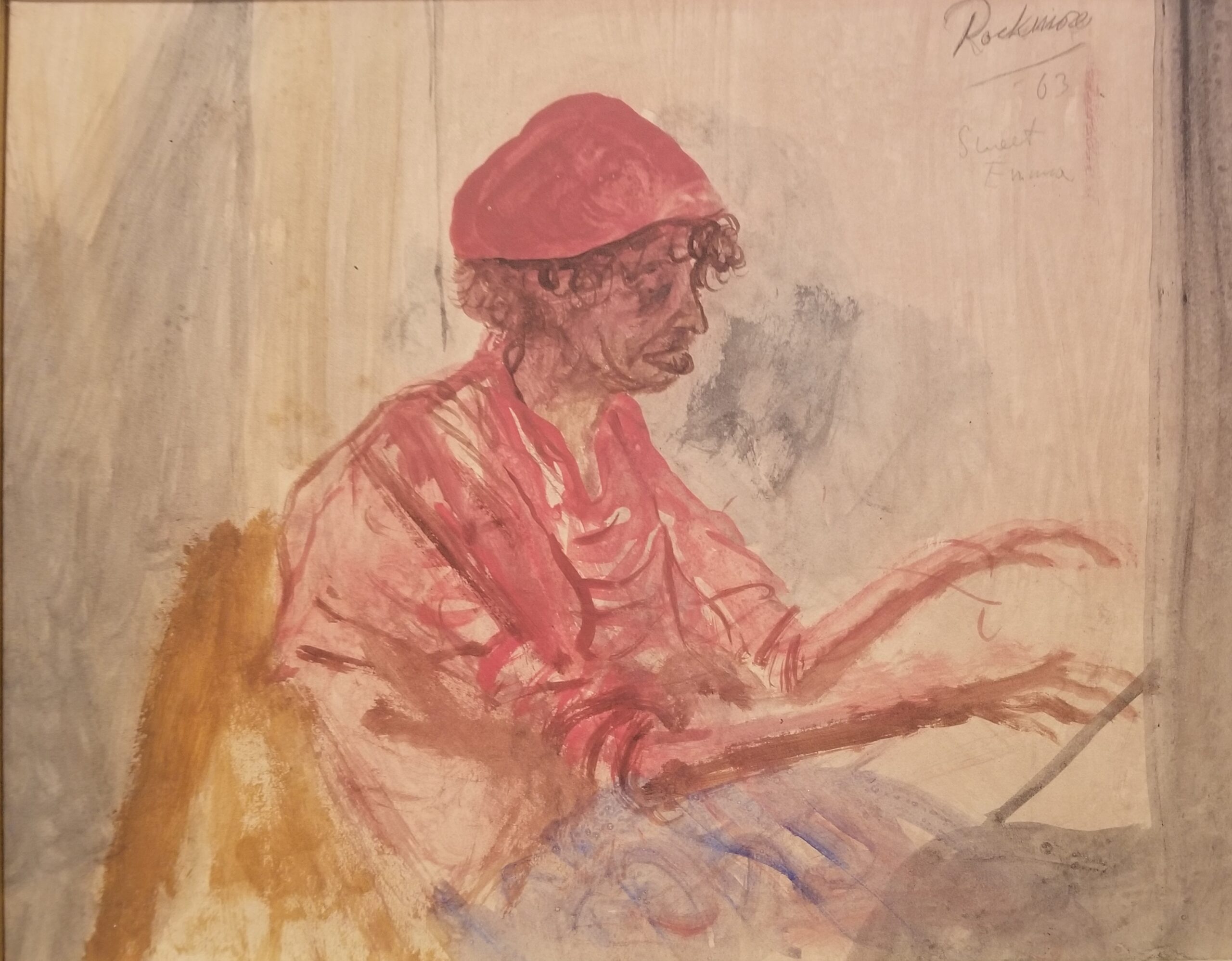 I recognized two portraits from the Ogden Museum’s permanent collection, as well as several on loan from the Historic New Orleans Collection and private art collectors. Rockmore’s portraits are impressionistic and the surrounding club atmosphere is dark, moody and abstract. Art dealer Larry Borenstein commissioned some of Rockmore’s most famous works for his gallery on St. Peter Street. 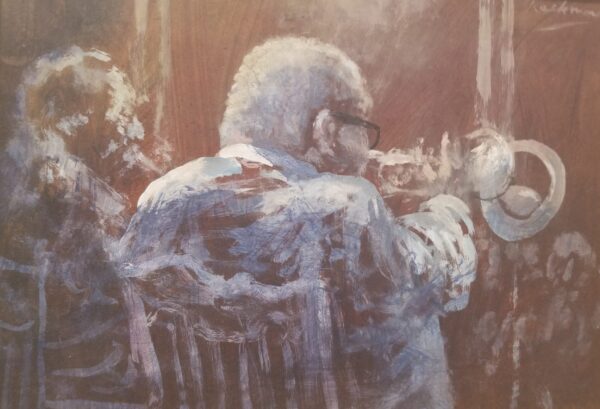 The museum brought together for the first time, works by Rockmore and his daughter Rhys. Separated from her father at age 2, the budding artist absorbed little of his artistic influence. Rhys’ approach to portraiture is lighter visually and emotionally. She began painting musicians when she arrived in New Orleans from the West Coast in 2011.

It was critical to me that these pieces be created in music venues during live performances, not from photos in my studio, Rhys said. Pen and ink is a fluid medium, easy to carry and use public. Fountain pens lend themselves to a bold technique and, during these eight years, I have developed a signature style using gloves as brushes.

In addition to The Art of Noel Rockmore & Emilie Rhys, the jazz museum currently offers exhibits about Louis Prima, the New Orleans Beat and Rick Olivier’s black and white photography. The museum continues to offer frequent virtual concerts off its website and recorded performances on its Facebook page.