Krewe: Foot-in-the-door at the corner store 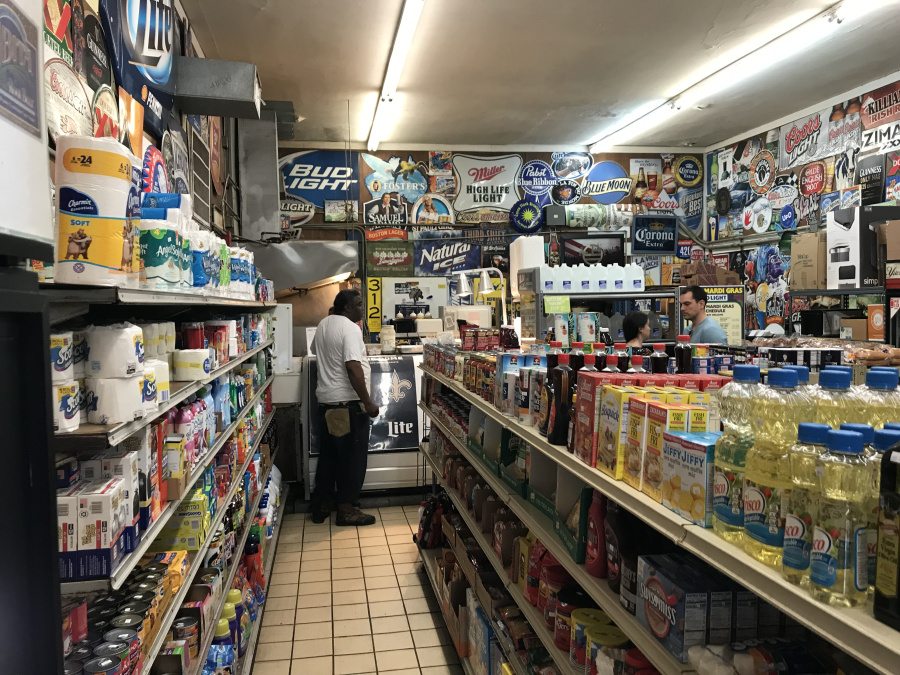 An authentic form of connection is vital to keeping a harmonious environment. Fortunately, in New Orleans, genuine interaction among neighbors and a sense of togetherness is still present, perhaps due to the prevalence of local corner stores.

A bright yellow, humble mini-mart is wedged between houses on the 1300 block of Adams Street making it impossible for Uptown locals to miss. A sense of peculiarity remains apparent upon entering Adams Street Grocery and Deli — soft drinks are aligned with shelves filled with toilet paper and napkins, liquor hangs behind the front counter, televisions and posters of beer logos line the walls. Yet, a visitor’s focus is less on the front-of-store aesthetic; rather, one’s attention is drawn to the back of the store, where freshly prepared New Orleans cuisine has been served for nearly seventy years. Every day, month in and month out, crowds line up to choose from a wide variety of traditional po-boy sandwiches at affordable prices. While the store lies two blocks away Tulane University, these sandwiches attract more than just college students on a skinny budget, people from all walks of life come to get their lunch fixed and enjoy the ambiance of Adams Street.

Two regulars, Darnell and Chuck from Second Free Mission Baptist Church, have made the visit to Adams Street part of their Sunday ritual. Darnell attributes his loyalty to the hospitality and the generous portions, “Every time I open up my po-boy I already got shrimp falling out. For five dollars, I would say that’s pretty good. The people here are always so nice, so we like to come here after church to chat and watch the football game.”

Although food in New Orleans has evolved, corner stores are still the cornerstone of local flavor. Up-and-coming restaurants are not as likely to specialize in the comfort food that NOLA natives define as their own leaving food critic Ian McNulty to believe that hot food still plays an important role in the neighborhood. “One of the reasons New Orleans people are devoted to corner stores is because it’s an anchor back to flavors they grew up with. For food to be truly special it doesn’t need to be fancy, but it need to speaks to you.” And, the food speaks for itself — acting manager Richard Smith estimates hot food accounts for 80 percent of the Adam Street’s profit.

While many corner stores today prioritize hot food, in the old days, residents relied on these establishments on a daily basis.

“There used to be no supermarket in the community, so Adams helped community members get everyday items which benefitted families a lot. People would have trouble taking care of their family without us,” says Smith, who has worked at the convenience store for over two decades.

Furthermore, the corner store is not just where people go to purchase goods, but rather a space to congregate. Upon entering a corner store the first person you see is the proprietor — typically someone who is from the neighborhood and knows the clientele. It is the connection and sense of familiarity that encourages customers to make frequent visits to the store, one that continues to extend outside the local community.

“Even those who aren’t from New Orleans, like college students, will come back to Adams Street Grocery years from now to get a familiar taste of what it was like to be student again,” McNulty said.

While I may refrain from pulling all-nighters, I will surely return to the safe haven that let me feel like a native Orleanian, and for the nostalgia of my “Freshman 15.”