It’s black and blue within Rhythm and Blues, a talk with Doreen Ketchens 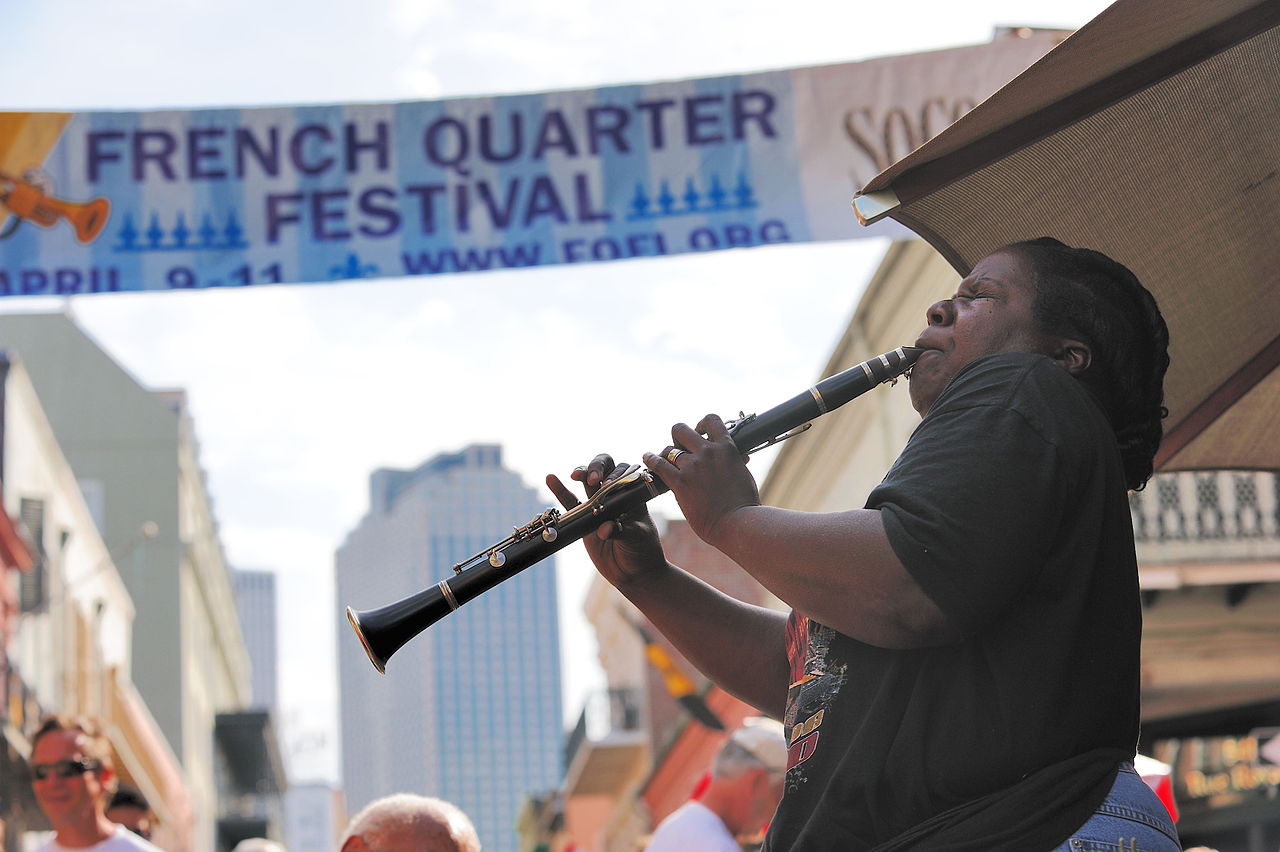 It was the late 19th century, and the average black man would do his daily routine of waking up as a black man: walking and talking as a black man, working as a black man, and sitting in the colored sections as a black man. Then Sunday would roll in, and he no longer felt like a “colored” man. It was his time to be a musician and express his humanity with rhythm and blues. Today, street performers, like Doreen’s Jazz New Orleans, continue to serenade their audience with those heartfelt melodies of jazz.

By the mid 18th century, slaves would gather together at Congo Square on Sundays, where they would drum their beats and dance the night away. After slavery, the southern states made sure to keep black people dis-empowered through Jim Crow Laws. These laws were used to lessen black people’s power, voice, and faith. It enforced racial segregation between black and white people to work in the white person’s favor. The laws prevented black people from voting and voicing their opinions, the principle of “separate, but equal” allowed segregation so that white people could continue to mistreat and dehumanize blacks, and with all the hate towards the colored people made it easy for them to lose faith. Though Jim Crow ruled the south, the people of color in New Orleans, Louisiana were able to find a way to share their struggles and views whilst keeping the faith that many of others have lost– that way was through music.

Jazz began as a way of expressing emotions and opinions of the world through the lens of black struggle and oppression. This genre of music began in New Orleans but made its way around as the “Roaring 20s” approached. New York jazz singer Billie Holiday’s most popular and memorable song was titled “Strange Fruit,” and spoke about the killings of the South. She sings, “Southern trees bear a strange fruit. Blood on the leaves and blood at the root. Black bodies swinging in the Southern breeze. Strange fruit hanging’ from the poplar trees.” The song was blatant and deep, in an effort to get others aware of the mistreatment blacks had been going through in the South.

Not only is jazz played for voicing struggles and oppression among blacks, but it is and was used for cultural appreciation and celebration, which is what New Orleans is known for.

Street musicians fill the city up with different styles of jazz, having New Orleanians and tourists join in on the celebrations. Doreen’s Jazz New Orleans is one of the best-known jazz bands in New Orleans today. When asked about the musical connection she may have with playing jazz, leader and singer Doreen Ketchens states, “Yes… I’d play something that really made me proud and look up in a corner and feel Louie smiling at me.  Oh, I fell in love with Louis Armstrong, too! I’d sing like him, move like him and even smile like him, just for fun. However, now his spirit flows through me every time I raise my clarinet to the sky. I blow hard and loud towards the heavens as if to say ‘Thank You!’”

This is no surprise, since Louis Armstrong is a main face of jazz. He was a New Orleanian trumpeter who influenced many jazz musicians today.

Jazz was looked down upon back in the day when white people dismissed it as a nonsense banging of instruments by colored folk. On August 30, 2018, The Times-Picayune Editorial Board posted an apology for its past editorial that denounced jazz back in 1918, on June 20th. The editorial was displeased with jazz due to where it came from. It was proclaimed to be “…a kind of servants’ hall of rhythm.”

Finding NOLA music’s future by looking to the past: An interview with music veteran Jim Markaway
Musicians