The truth in the lie

Editor’s Note: The following series “Language and Culture in New Orleans” is a series curated by Lucien Mensah as part of the Digital Research Internship Program in partnership with ViaNolaVie. The DRI Program is a Newcomb Institute technology initiative for undergraduate students combining technology skillsets, feminist leadership, and the digital humanities.

The series, “Language and Culture in New Orleans,” (curated by Lucien Mensah) does what publications should always be doing — it forefronts languages and culture that (check of “If Black Language Isn’t a Language, Then Tell me, What Is” by James Baldwin) are true languages and culture that due to colonialism have been pushed down into the “alternative.” AAVE, or African American Vernacular English, is a dialect of American English molded by Black people’s experiences during slavery, as various communities of Africans were forced to the Americas. As AAVE terms become popular online, many non-black people use and appropriate these terms with little knowledge about where they are from or what they mean to their native speech community. As each article in this series is presented, readers are encouraged to think about their vocabulary and whether AAVE is actively used — and are you aware of the words you’re using that might be “slang”?

This article exists to bring awareness of Vodou, a religious practice that shows the ancestral knowledge and history contained in New Orleans. The religion is often misconstrued, but as we reflect on Black culture in New Orleans, we must understand the multilingual and multicultural space. This was originally published on NolaVie on June 17th, 2019.

ViaNolaVie, Krewe Magazine, and Bard Early College New Orleans partnered together in an effort to bring voices of the youth into the journalistic realm. Under the guidance of professors Kelley Crawford (Bard Early College and Tulane University) and Michael Luke (Tulane University),  a composition course was manifested where students write non-fiction, New Orleans-based pieces, resulting in a printed publication (Krewe magazine) designed and published by Southern Letterpress. We will be publishing each student’s piece that was chosen for the magazine. 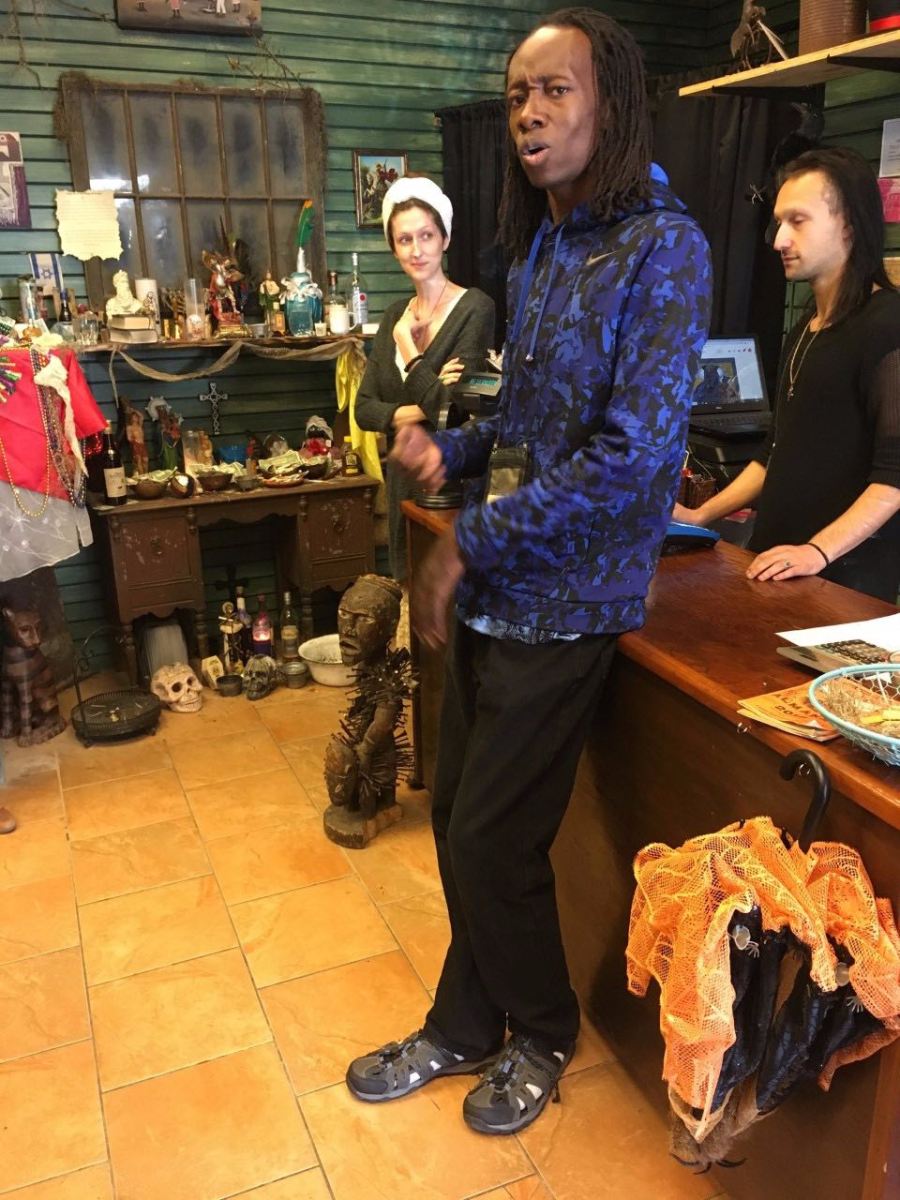 Outside, the building looked abandoned, a brick shed with garage door-style windows. It was dark, the only light coming from a street lamp on the empty lot next door.

Inside, the walls, ceiling, and floors were painted black, with a few pieces of art hanging sporadically. A family reunion of sorts was taking place before the Vodou (VOH-doo) altar, decorated with purple, white, and black flowers, plates of sugar, and several bottles of rum. A traditional Haitian Vodou priestess of an anonymous name instructed various people on where to place these things, leaning on her cane as she walked over to a group of onlookers.

“No pictures, no videos,” she said. “If we catch you, we will take your phone. You’ll get it back when we finish.”

The ceremony began much like any Christian gathering- with the Lord’s Prayer in Louisiana Creole, the family’s primary language. Vodouisants, however, are not Christian, though, like Christians, they only recognize one god, whom they call “God.” Vodou simply means “spirit” or “ancestor,” and the common misconception of their worshiping multiple gods comes from their honoring their spirits and ancestors for the good deeds done during their lives, and asking for earthly favors from them through prayer, as well as these Vodou ceremonies. These spirits are not unlike Catholic saints, though they are called Loa (LOH-ah), who are strictly Haitian, and Orisha (or-EE-shuh), who can be from anywhere in Africa.

The prayers continued, with the high priestess seated before the altar, leading the Vodouisants in unfamiliar chants for over half an hour. Finally, the priestess stood and walked slowly around the room, taking each of our hands as the chanting continued.

Afterward, she explained to us that it was a prayer to her ancestors, asking them to welcome us all as brothers and sisters in spirit.

“We are now back in Africa with them,” she said in her heavy Haitian accent.

Obviously, we were still on the streets of New Orleans. Spiritually, however, we were with their ancestors in Africa, a concept which is not entirely foreign to Christianity, as Catholics are “together” with Jesus at the Last supper each Sunday at Holy Communion.

Just like that, the reverent airlifted and people gathered in small groups to chat as they waited for the drummers, stuck in New Orleans’ ever-backed-up traffic. Men and women, black and white alike, caught up with each other, beers and sodas in hand.

“One day, you’re gonna wake up and that cane isn’t gonna be next to you,” the high priestess’ son said after she had jokingly hit him with it.

“It’s much more relaxed here than at Christian churches,” said one Vodouisant. “We’re not afraid to joke around with each other or lighten up a bit.” He shrugged. “If all of my friends are in Hell, why would I want to go to Heaven? The Devil’s probably got the barbecue, anyway.”

Twenty minutes later, there was a cheer as a group of men was ushered in, carrying large African-style drums. The ceremony could finally begin.

Once the music began, the Vodouisants stood, beginning to sway and dance to the beat of the drums. Occasionally, the high priestess would raise a hand to stop the music. She would lead the Vodouisants in a chant, then motion for the drummers to continue.

This continued for over two hours before a bald white man began spinning around the room, arms flailing. The others rushed to catch him before he fell on the concrete floors. He then began yelling incoherently.

“Aye! Aye! Aye!” He squared up, heading towards the people in the front row. There was a flash of purple and scraping of chairs, as we rushed out of his way while others hurried to restrain him, tying a piece of red satin around each arm before releasing him.

The man continued his yelling as the others stood around him, coming forward one by one. The man linked arms with them one at a time, head-butting some of them in the process.

Suddenly, he threw himself at the high priestess, landing in her lap before being dragged away by the others.

It all ended as quickly as it had begun, with the man spinning around the room with a flurry of purple fabric rushing to catch him before he fell, seating him in a chair.

“Someone get water!” said a young priestess.

“She said she’d catch him. She been planning that one,” said Robi, pointing to the high priestess with a laugh.

“You did me dirty,” the newly un-hypnotized man said, laughing and gasping for air.

Previously, we had been told by Robi that the person who’s body a spirit chooses would not remember being a vessel, nor would they experience any physical consequences from their encounter. Yet the bald man sat, panting and sweating while he rubbed his forehead as the others rushed to get him a bottle of water. He had clearly understood who it was that had inhabited him, though we (the audience) were not told the spirit’s name. However, since Vodouisants may honor different Loa and Orisha, it is safe to assume that this man would have known the spirit by name; how he recognized this immediately after the spirit’s leaving, without having been told, remains to be seen.

This is all enough to make someone question the legitimacy of a possession, but it also remains to question whether or not a man would risk further injury to a crippled, elderly woman- much less one who was family.

But what calls someone to willingly offer themselves as a vessel to a spirit?

Some, like Robi, are born and raised in Vodou. Others convert, many of whom do so from Christianity.

“I felt a calling from my ancestors, and that’s what led me here,” says an anonymous Vodouisant. He had previously been heavily involved in his Christian church’s ministry but desired a religion that felt more personal to him, finding such in Vodou.

The religion came to Louisiana through slaves imported from Africa, first to Haiti, then to the Caribbean, then to New Orleans. In essence, Vodou is still practiced in much the same way it was thousands of years ago, and that is through ceremonies such as these.

Why, then, is the word “Voodoo” slapped onto so many events and locations in New Orleans? The main culprit in this is Hollywood, who pulled inspiration for horror and supernatural movies from religions such as Vodou but keeping the name, thereby spreading misinformation about something American people knew little about, even if unintentionally.

“There is a truth in every lie,” says Robi.

One popular being in Voodoo stories is the zombie; however, there is no raising of the dead in these ceremonies. The inspiration for zombies most likely came from the overfilled jails of Haiti, who had no room left to house the criminals who were consequently injected with pufferfish venom. When their nervous systems shut down, they were set free with their familiar “zombie walk,” saving room and thereby marking them as criminals.

“The only sacrifice we make is the food we cook and eat for after our ceremonies,” says Robi. There are no human offerings, aside from the Vodouisants offering themselves as temporary vessels, and they are not there to inflict pain on anyone.

But what about the famous Voodoo Doll, which is famous for being a pain-inflicting instrument? Turns out, it’s really not even part of the religion at all.

Medicine men and women in New Orleans, most being slaves, for the most part, did not know how to read or write, but still needed to keep track of patients and their ailments. Therefore, if someone came in with a headache, a small doll was decorated in their likeness with a pin placed in the painful area: in this case, it would have been the head. That way, when the patient returned again, the medicine man would see and remember any previous ailment and inquire on their progress. If their head was better, the pin was removed; if not, another treatment could be given.

The doll commonly imposed on Vodou, with its pins and pain, is actually called a poppet and comes from the witches of England.

The culprit of this confusion? “Hollywood,” says Robi. “Y’all saw it; Y’all believed it. And then, Y’all started buying it!” Almost all of the tourist shops around the French Quarter sell “authentic voodoo dolls.”

“Forty-five dollars,” says Robi, laughing and rolling his eyes. “That’s the most expensive one I’ve seen so far. Made in China.”

Medicine men and women in Vodou commonly practiced hoodoo, which is a form of herbology; however, hoodoo is not necessarily a part of Vodou. Vodouisants can practice hoodoo or not; hoodoo can also be practiced by someone who is not a Vodousiant. There is no magic involved in the practice.

What, then, is magic? How do all of these prayers and possessions work?