A matter of taste: Talking chocolate and process with Piety and Desire’s Christopher Nobles 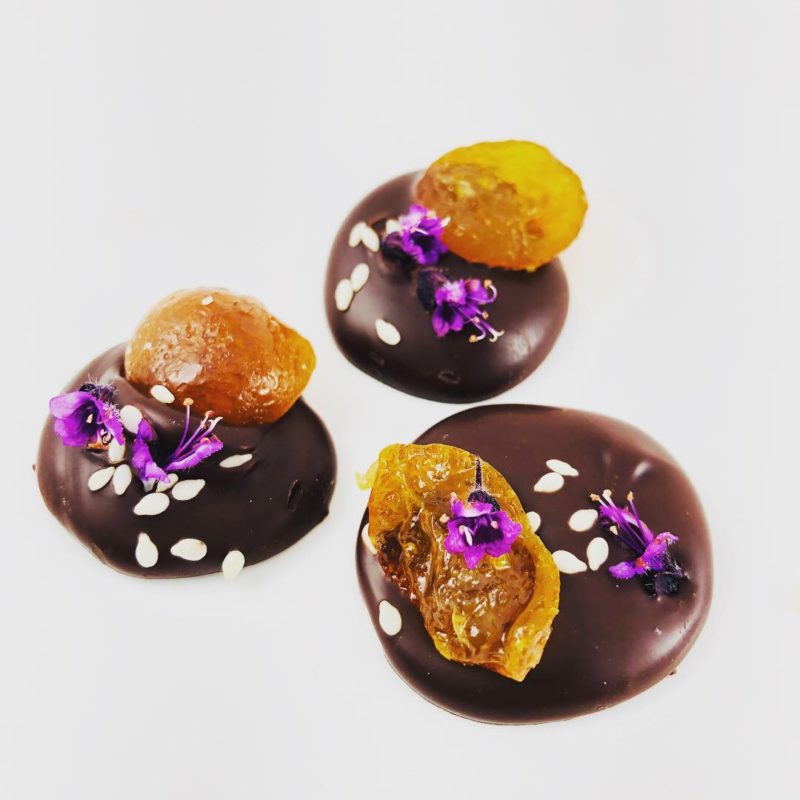 The start of South Louisiana summer always leaves me looking for something to take my mind off the humidity, termites, and high energy bills. Sometimes a piece of dark chocolate is just the trick. Recently,  I’ve gravitated towards bars from a New Orleans-based company named Piety and Desire— as well as their intricately  designed bonbons that are packed with unique flavors. A few weeks ago, I caught up with the company’s owner and chocolate maker Christopher Nobles for a conversation on what goes into making a “good” bar of chocolate.

This interview has been edited lightly for length and clarity.

David Benedetto: When did you know you wanted to be a chocolate maker?

Christopher Nobles: I guess about five years ago or so? When I first started dabbling in it at home. Growing up here I’ve always held cooking jobs and loved cooking, but I never really wanted to do that as a career in a restaurant or anything. [I’ve also] always kind of loved chocolate, and I’ve always found myself at the intersection of art and science– be it playing music or studying psychology and history in school and stuff like that. So it kind of was a natural fit once I started playing around with it. 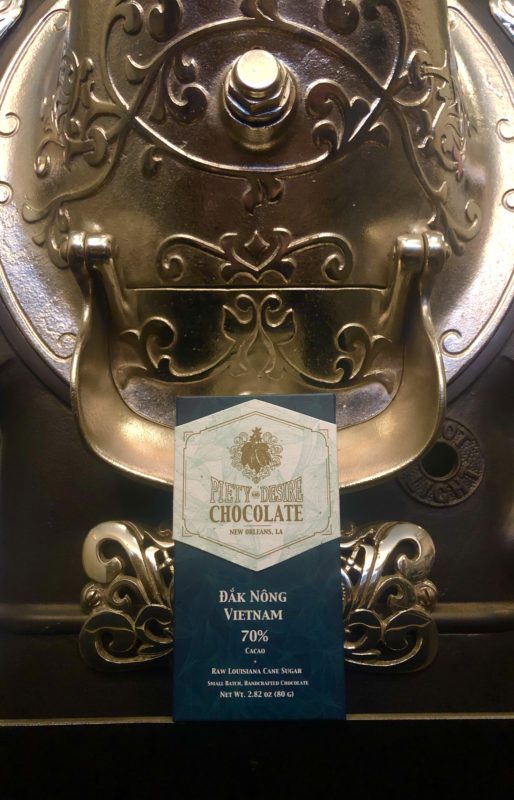 CN: Probably the first sample batch I ever made at my house because it was kind of mind-blowing to me that you could actually manufacture chocolate at home starting from the cocoa bean. You know, everybody loves their first child the most– as a first child I can affirm this. [Laughing]. But, yeah it was just love at first sight, love at first taste.

DB: I know your business model is based off of a bean-to-bar kind of ethos?

CN: Yeah! Bean-to-bar-to-bonbon– and beyond.

DB: What does that entail?

CN: Oh, well quite a bit. So first it involves ethically sourcing cacao. Whether buying directly from growers or cooperatives or buying from somebody that has. And [then] ensuring that it’s responsible in an ethical sense– that people are being paid enough for their labor– and also environmentally responsible ways as well. Like you don’t want to support huge mono-culture plantations, and you want to support perma-culture practices, inter-cropping, rain forest canopy sustainability– all that.

And then once we have our source we actually receive the beans, sort them out, and roast them. And that’s actually quite a bit of trial and error– going through trying to dial in the flavor where we want it with the roast. Then we grind it down after removing the shells, refine it for a few days, and then conch it– which is the finishing phase of chocolate where we’re kind of dialing the flavor in where we want it and then continue to process it for mouth feel. And then we temper it up into bars or bonbons or what have you. Just like that. 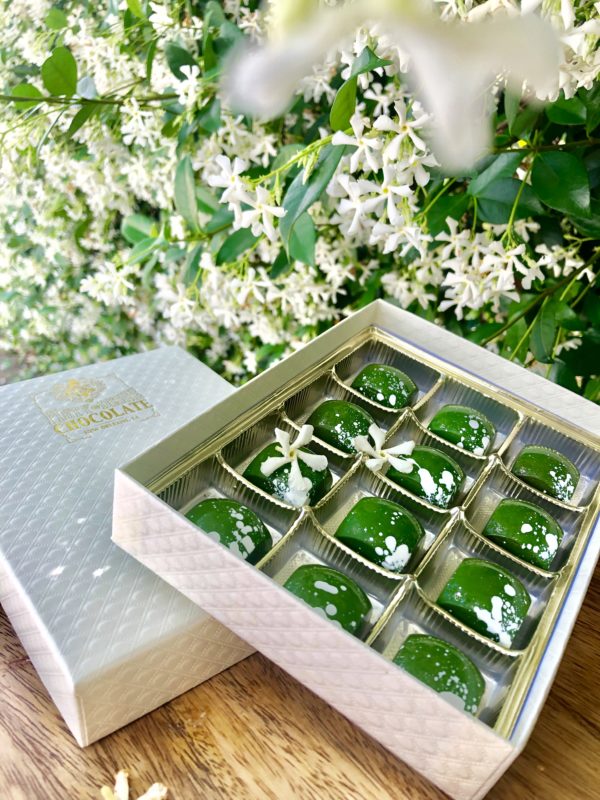 DB: It’s kind of a loaded question, but after doing this for five years, what do you think makes a “good bar” of chocolate?

CN: Well, first of all, I do have some employees. So shout out to Justin back there who’s holding down the fort right now. As far as the question, I like to say that– as a chocolate maker– I consider myself a curator of cacao with character. So I think that plays a large part of it. It’s finding and utilizing the cacao, honoring it, and doing the best that you can with the flavor of it. And then of course there are the technical issues of how you treat that, how you actually refine it to the right level, and then what you do with it from there also.

DB: Which brings me to your bonbons.  I’ve seen photos of them online and they are quite interesting. I’d love to know a little bit about your process– what goes into crafting them because it looks like they are kind of feats of architecture. What’s your process like for designing their appearance?

CN: I kind of take a “slow-food” approach to crafting my bonbons. I’m usually going to start with the idea of what’s in season and go from there. Once I know what I want to make then I visualize what that looks like to me– what shape it’s going to be based off of [or] the flavor. For example, my Jazzerac bonbon which is a Sazerac flavor. I envisioned the cocktail being in a rock’s glass so I put it in a shape that looks kind of like a diamond. It’s got those facets like a rocks glass would have. And then visually for that one I kind of swing for the fences on it and have what looks like a little orange peel at the top and have a little swirl of green to represent the absinthe rinse in the glass and [also] a little swirl of gold just to give it that shimmer in the light. So that’s kind of a glimpse into my process. 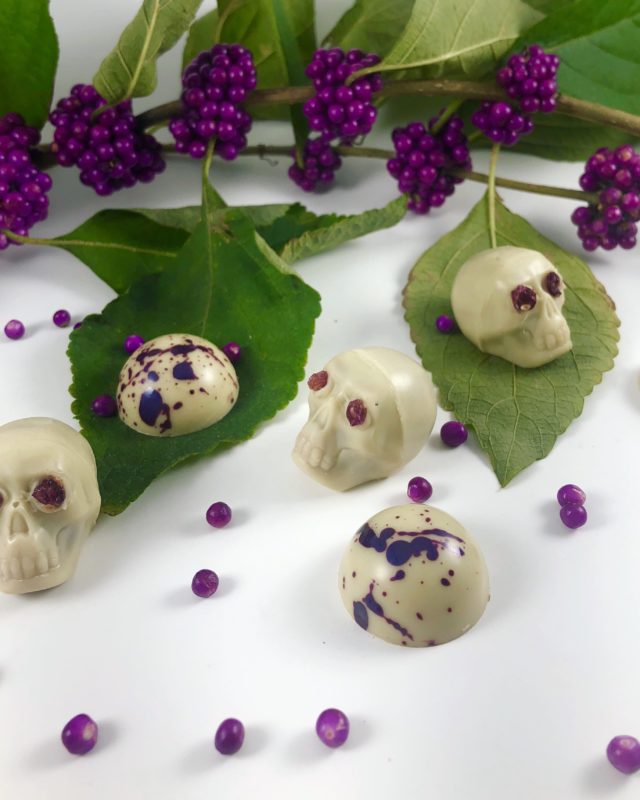 DB: I think that’s so cool because you know we’re used to all these like reality programs like the cake maker one– people making what looks like works of art, but they’re not edible. And one of the things I like about your chocolate is it is very much edible. How do you try to bring balance with how the bonbons look like and how they taste?

CN: I feel like in confectionery sometimes things don’t taste like they’re actually supposed to. Like, for example, sometimes you’ll get something that’s supposed to be Sazerac flavor and it’s not right. You’ll be like, “OK, I guess that’s what this is supposed to be? “ But one thing we pride ourselves in is that customers always tell us, “Oh wow! It’s like you can actually taste it.”  Right now, we have a Persian Saffron bonbon. And people are talking about how they can really taste that saffron because we don’t skimp on it. We don’t use artificial flavors and things like that. Again, [it’s] kind of coming from the “slow-food” ethos. We do it the way it’s supposed to be done.

DB: Do you have any special releases coming this summer?

CN: Yeah! We have collections that come out each season and so again this year for summer we’ll be releasing our Hemingway Daiquiri, as well as what we call “Dad’s Idea of Brunch” which is a candied bacon and scotch donut bonbon.

Piety and Desire is located at 2727 S. Broad Street and is open Tue.-Sat. from 2-7 p.m. More information–and photos– can be found at www.pietyanddesirechocolate.com.