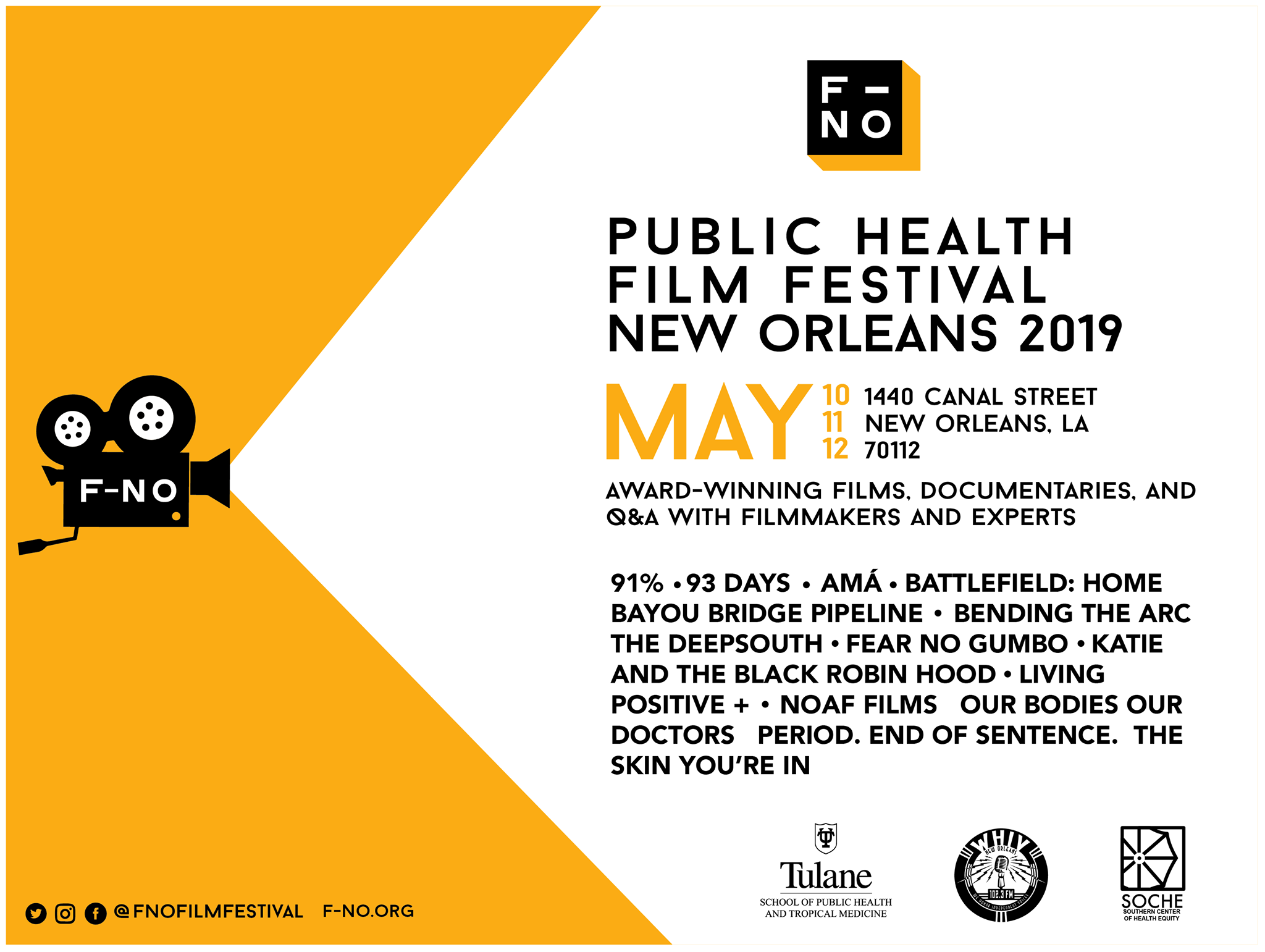 Friday, May 10 marks the opening day of the city’s newest festival– the Public Health Film Festival of New Orleans. A collaborative effort between Tulane University School of Public Health and Tropical Medicine, 102.3 FM WHIV, and the Southern Center for Health Equity, the film fest (F-NO for short) aims to “…foster discussions on a variety of health issues while honoring filmmakers who advocate for much needed change.”

“It’s kind of a shared vision,” says David Roston, Communications and Dissemination Manager for the Tulane Prevention Research Center and board member/radio host at WHIV. Both organizations had expressed interest in doing a film festival concerning public health, but realized coming together would be more effective.  “We all got together and decided that it’s better to have one film festival instead of competing festivals,” says Roston.

Screenings will be held this first year at the Tulane School of Public Health and Tropical Medicine on Canal Street and focus on a variety of topics “The film festival is meant to educate and inform through these films, but also foster discussions,” says Roston, listing subjects as diverse as reproductive justice, HIV and AIDS, veterans health, gun violence, and  the role of water protectors.

The festival will also feature a large number of New Orleans and Louisiana-based directors, “This year we searched within our own network of filmmakers that we’re connected with to be a part of this film festival,” Roston says, but hopes that in future years  the festival may have a more national presence with a formal submission process and even a jury panel.

Some films of note include Kief Davidson and Pedro Kos’ Bending The Arc about Dr. Paul Farmer’s humanitarian work against disease in Haiti and the documentary Bayou Bridge Pipeline from director Alexander Glustorm about the water protectors leading the protest against Energy Transfer Partners’ Louisiana project.

Another short documentary debuting at the festival will be Katie and the Black Robin Hood from directors John Richie and Alessandra Giordanno which focuses on the New Orleans public defenders and how the convicted are portrayed in front of judges during sentencing. “They’re making films about [the convicted persons] to show their lives and who they are and where they come from and what their environment was to create this more humanistic story about who they are,” says Roston,”We want people to know what’s going on and to be informed about this and to get together to do something about it.”

And it’s not just films. There will also be a number of panels throughout the weekend focuses on many of the issues touched upon in the films. “We’re very fortunate to have local filmmakers join the panels,” Roston says. “But we’ll also have experts in the field coming in to talk about these different issues, [as well as] individuals from the different communities that are affected by the topics that are portrayed in the films.”

Starting a festival is hard, especially in a city that’s known for holding multiple ones every weekend. “We just want people to show up and to be open to exploring some topics that they might not be familiar with,” says Roston, expressing hope that the festival can serve as a space for people with different backgrounds to come together that otherwise might not be able to have these sorts of dialogues.

And as far as the future is concerned?

“Who knows,” Roston says, “Each year we just want to continue to grow and expand. There are endless possibilities.”

The Public Health Film Festival of New Orleans will be held May 10 – 12 and be held at the Tulane School of Public Health and Tropical Medicine at 1440 Canal Street, New Orleans, LA, 70112. Admission is free, but due to limited space, interested parties should RSVP beforehand. More information can be found here.

I was here and really enjoyed this film festival!

Perry Gunten
Recent Posts on ViaNolaVie
Donate to ViaNolaVie!     GIVE BACK TO THE NEW ORLEANS PUBLICATION THAT’S ALWAYS GIVING!  ViaNolaVie,...

“It took us 22 years– but we’re here”: Talking with Al Jackson of Treme’s Petit Jazz Museum
Audio and Podcasts

A matter of taste: Talking chocolate and process with Piety and Desire’s Christopher Nobles
Audio and Podcasts