‘Keep It All Moving Along’: In conversation with Dianella’s Danielle Ryce 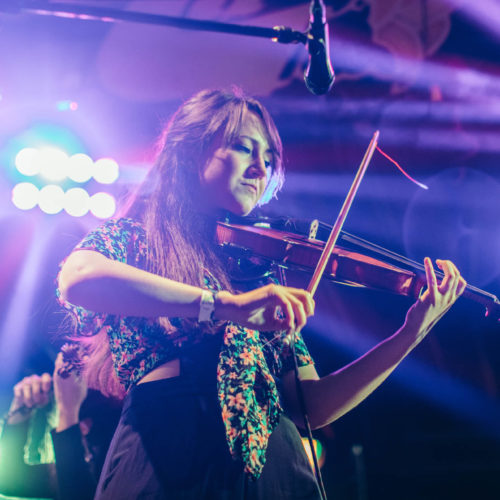 Danielle Ryce has been playing music all her life. After graduating from Loyola University, Ryce has kept busy by bringing her violin and voice to several musical projects — most recently her new band, Dianella, who just released their first EP and set of videos titled Live Sessions at Neutral Sound Studio. I caught up with Danielle for an interview a few weeks ago to talk about her musical stylings and how this project came to be.

DB: So to dive into your latest project— Dianella — how did that come about?

DR: Well the name of it specifically came about because I was playing a gig, somewhere on Frenchmen Street, and someone came up to me afterwards and they’re like, ‘Hey! Your name’s Daisy right?’ And it’s like, ‘…No?’ [Laughs]

But then, I got really attached to the idea of flowers, so I sat down and Googled flowers that start with D and I found dianella. Besides it being almost my name, it’s also rumored to be named after the goddess Diana, who’s the goddess of women and war. Almost all my lyrics are about battling to find happiness and finding my voice as a woman and so I thought, ‘That sounds good,’ and hopefully that’s OK legally, so here we go!

DB: So Daisy has become your persona now?

DR: No, no. I do like daisies, but I prefer Dianella now. Daisy was a little too nice, too lovely I guess.

DB: I get that! I know you’re with a bunch of other people in this project as well. Tell me a little bit about them and how you came together and brought them along with you.

DR: A lot of them I knew from school and the networks that spread from there. The videos I released– the guitar player is also in my other band, Nyce. His name is Elliot Slayer; he’s rockin’ and plays with the Stooges Brass Band.

Then there’s Trent O’Neal and Quinn Sternberg on bass. Quinn’s kind of like my rock in the group. Whenever I do a duo show, he’s there too. And then there’s Fanny Friadt out on violin, Theresa Romero who‘s also in another band called Butte, and Joshua Sierra is in the videos on cello. And then Rob Kellner– I couldn’t forget Rob Kellner! He’s on keys and he plays with Miss Mojo on Maggie Corner, and they’re all just like–

DR: Everywhere! Like I could do a whole interview about all the things they do. They are so impressive [and] I’m so happy to have them play with me.

DB: I love that that you’re bringing in all these people that are a part of this community and it feels like a community. How have you enjoyed being in the New Orleans music scene?

DR: It’s great! I love it. I think what I like about this project is it kind of combines both my worlds. I went to school for classical violin and so combining my pop rock background with Nyce and then the classical world and then melding it together. It’s just so easy to make friends and make music here.

DB: When writing songs for like a project like this, how do you ground yourself? Because I feel like you’re probably being pulled in so many different musical directions with your various interests in jazz, rock, and classical.

DR: It’s a lot of fun! I think the way I’ve been writing for this project is I literally just layer everything again and again and until it sounds good, and that’s a lot of fun. So I like playing my violin part, and then I’ll layer and drop it an octave and pretend it’s a cello.

DB: Do you start most songs with the violin?

DR: Violin or guitar at this point. Sometimes piano. I don’t know how it happens. There’s usually like a melody or chords and then I just kind of force myself into a room for a couple hours until I finish a song.

DB: I’m sure going to music school really helped that process because you have to get things done and you can’t procrastinate as much as you would like to I’m sure.

DR: Yeah, definitely. The reason why I finished the songs I have is because I got my friend Jazmarae, who does the Siren Series, which features local women artists, asked me to go on it, and I hadn’t finished any of my songs yet. So, [it was] time to lock myself in a room finish up this stuff. [Laughs]

DB: Nothing like abject terror to make you finish songs.

DR: Yeah, deadlines are key in my life!

DB: What’s your favorite part of playing the violin?

DR: That’s a great question. Right now, I really enjoy playing it like a guitar– kind of off to the side, plucking [and] strumming it. I would never tell my students that, but I’m really enjoying that because I can sing and it feels like it’s more rhythmic.

DB: So you just released a series of videos, right?

DR: Yeah, we did four videos for four different songs, took the tracks from that and just calling it a live EP. It’s brand new [and I’m] super excited about that.

DB: Who are some artists that you’re listening to today that you really love?

DR: Right now in this very moment I’m listening to a lot of Emily King because she just came out with new music. [I’m] super stoked for the new Andrew Bird album. He is just incredible. And then Regina Spektor is also a huge inspiration for me. Local artists — I mean I love Sweet Crude [and] Ship of Fools also because there’s a similar texture to that. I also have a lot of great friends in this city who are just incredibly talented like Jazmarae, Catherine Rosewood, McKayla Braun — all those singer-songwriters just melt my heart so much.

DB: What are some things that you’re looking forward to for the rest of 2019?

DR: I’m looking forward to just hitting the road running with this new project. I’m excited for another show — to get another deadline to write more content. You know, to keep it all moving along.

More information about Dianella can be found on their Bandcamp page, as well as on their Facebook and Instagram.

‘It’s like the whole room is the show’: Songwriter Julie Odell turns up the volume
Audio and Podcasts