When Winnie Harlow was just 4 years old, she was diagnosed with the chronic skin condition vitiligo, which results in discolored patches throughout the body due to loss of melanin producing cells. When the patches first began to appear, Winnie’s mother brought her over to her grandmother’s house, lifted up her shirt and pointed to a spot on her back. Her mother said, “Look, there’s a new spot on her back”. Her grandmother did not skip a beat before replying, “You cannot do that to her because she will feel like her differences are something negative and that’s not right”. Little Winnie pulled her shirt back down and smiled at her grandmother. Growing up, Winnie would hear these affirmations constantly from her family. At home she would hear “your differences are beautiful” and “your differences are valid”. 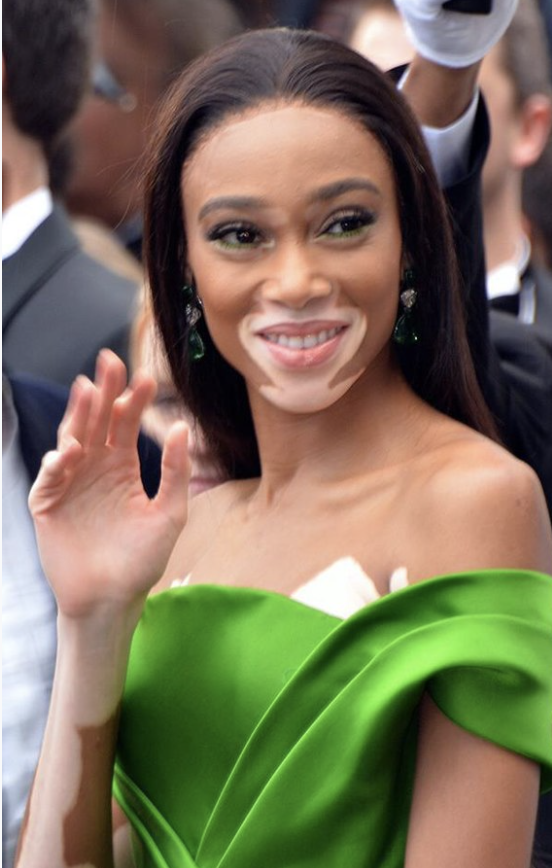 The statements she heard at home were not equivalent to what Winnie heard from peers. Beginning in middle school Winnie would walk into school and other students would walk right up to her face and say “You look like a cow” or “You look like a zebra”. Children would even “moo” at her. Winnie knew she had to grow thick skin being different from her peers, but the bullying became too much to handle. Winnie made the decision to drop out of school at 16 and begin being homeschooled by her single mother, while also battling suicidal thoughts. She stated she had never seen anyone look like her, making her feel completely alone in her condition. These feelings are proven to be common among those with vitiligo, as participants in a study on vitiligo and social media were shocked to see the amount of hashtags surrounding vitiligo, as well as the positivity surrounding the concept. A search of #vitiligo led to awareness of the many people who not only have the condition, but share it on their social media. One participant stated that she “didn’t even realize there were so many people out there, and just a lot of pictures”. Of 21 participants who were asked to post about their vitiligo on their instagram, 20/21 were met with complete positivity, and interested people who were unaware of what vitiligo is and the effects it has.

When Winnie was around 16 or 17 she would be featured in some of her friends’ fashion shows for websites and brands for which they worked, such as the clothing brand Desigual. “I would just do it as a favor and we’d go out to lunch after and they’d pay for it, I wasn’t even paid”. Winnie had a vast interest in social media, and with all the time she spent scrolling through different forms of media, she had never seen anyone else with vitiligo posted on social media. She believed that she was the only person in the world like herself and attempted to change this by posting about her little modeling gigs on her social media and creating content out of this hobby. “I posted my content because people seemed to enjoy it and be interested in it”.

Driving in the car one day as a young teenager, Winnie heard a casting call opportunity for modeling on the radio. After repeatedly begging her mother to take her to this casting call, she finally agreed and went with Winnie to downtown Toronto. The woman running this casting call saw Winnie and complemented her excellent bone structure and lean body. Despite these compliments, she recommended that Winnie become a makeup artist if she wants to be in the modeling industry. Winnie was taken aback but even more determined to make it in the modeling industry as an actual model after this tone-deaf interaction. She then auditioned for America’s Next Top Model where Tyra Banks bluntly told her “if you get into this competition I will not soft tread. I will be just as hard on you as everyone else”. Winnie said in her audition interview, “I don’t need any favors. I’m going to be myself”. She ended up being the second model eliminated, but did not end her career there. 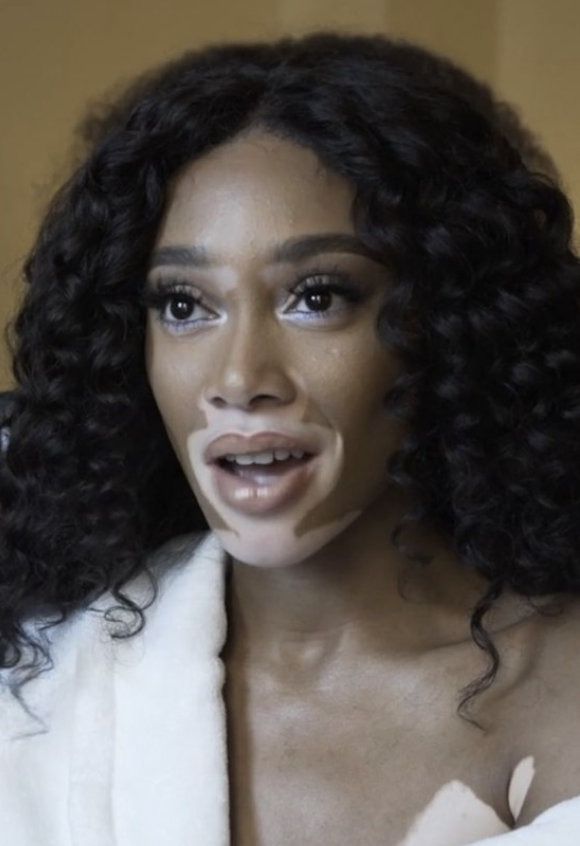 The same time Winnie’s career was taking off, mass media trends of celebrating diversity as a new form of stigma management also began. Instead of magazines, companies, and media accounts strictly representing their brands with toxic ideals of “perfect”, “flawless”, and homogeneous, now these corporations have begun to incorporate models who deviate from this destructive mold. Not only does this include models who are overweight or minorities, but models with disabilities have begun to rise to fame more often. In February 2017, Winnie Harlow was featured on the cover of Elle Canada along with an article about her. Despite the rarity of being placed on a magazine cover with vitiligo, in the 1865 word article written about her, vitiligo was only mentioned six times. The rest was filled with celebrity discussion and fashion tips.

America’s Next Top Model helped Winnie grow her social media and the brand she made for herself as a model, even more than when she was a teenager. After being eliminated from America’s Next Top Model, a British photographer named Nick Knight called her. Winnie made the flight from her hometown of Toronto to London to shoot with Knight. Knight ended up booking her first international fashion campaign. Winnie considers Knight to be her “Fashion Godfather”. Making the decision to fly to London all for a photoshoot with Nick Knight ended up being what gave Winnie her big break.

Once Winnie got her big break, she began campaigns with multiple companies, was featured in Beyonce’s Lemonade Film, and walked as an angel in the Victoria’s Secret Fashion Show. As a teenager, Winnie was bullied and suicidal, but a few years later she has become a well respected super model. The constant praise, acceptance, and popularity from the public allowed Winnie to look in the mirror and no longer see just a girl with vitiligo defining her. Working more in the modeling industry led to her realization that she spent so much time searching for others approval, which contributed more to her depressed and suicidal thoughts. She now values her own opinion more to keep her happy and not the opinions of others. “The moment I realized I was searching for approval was when I realized I was so unhappy with that.

It is only the opinion of myself that I need to keep me happy.” An affirmation she says to herself is “I think I’m beautiful, I think I’m funny. I don’t have to look to other people to know those things about myself”. Winnie created an identity that was not centered around vitiligo. She constantly hears “Winnie Harlow: Sufferer of vitiligo”. To this, she says “I am not “suffering” from vitiligo, I am living and thriving.