Fagaly art collection goes on the auction block this week 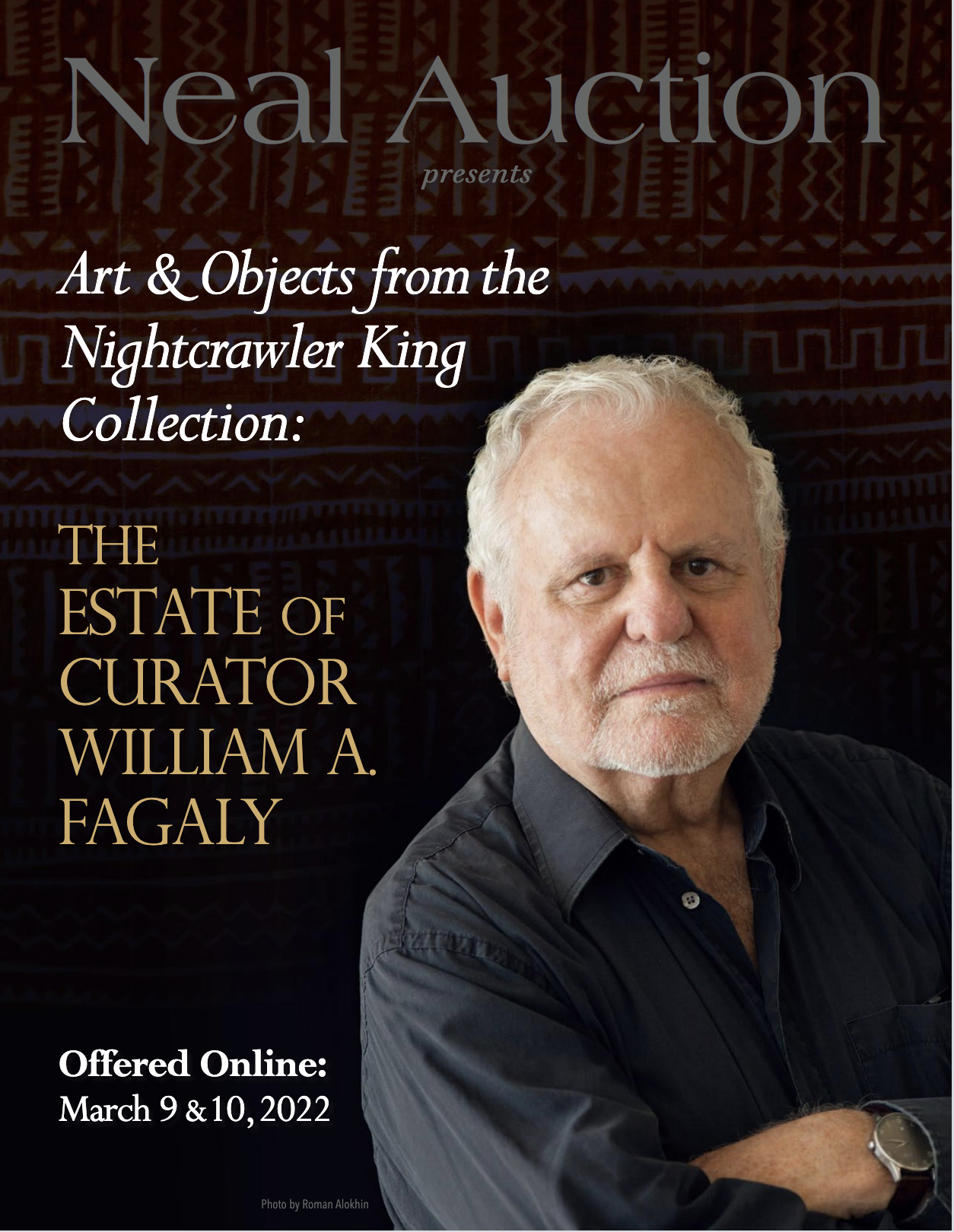 Works from the collection of the late Bill Fagaly will go on sale this weekend at Neal Auction House. (Photo: nealauction.com; portrait by Roman Alokhin)

The late Bill Fagaly, raconteur, museum curator, cat lover, art collector, and avidly larger-than-life New Orleanian, always was forward-thinking. Such was evident early on, when he first became The Nightcrawler King — a sobriquet awarded to him in later life by local artist Dawn Dedeaux upon hearing about Fagaly’s enterprising collection and sale of the eponymous fish bait while he was still just a kid in Indiana. (He bought his first artwork, a Toulouse Lautrec print, with the nightcrawler proceeds; it turned out to be fake.)

That kind of serious but offbeat collecting characterized Fagaly all his life — through his 50-year-career as a curator at the New Orleans Museum of Art, his decades of world travel, and his equally long history searching out not only unique and often self-taught artists, but also their most intimate and interesting pieces of art, items that spoke to him in personal and provocative ways. Some 485 of those items will go on the block this week at Neal Auction House in a two-day sale billed as Art and Objects from the Nightcrawler King Collection.

And in another bit of outside-the-box thinking set up by Fagaly before his death, proceeds from the sale of his entire art collection will go to endow Prospect New Orleans, through the William A. Fagaly Fund for Social Impact. In addition to the Neal auction proceeds, funds will include about $500,000 brought in by an earlier sale of 47 hand-selected items through Christie’s in New York.

“Bill had such an amazing depth of knowledge, and he truly understood how this city works,” said Christopher Alfieri, Prospect New Orleans board chairman and the executor of Fagaly’s estate. “The Bill Fagaly Fund will allow us to get our hands more deeply into the community. It will all go into the community, and we rarely have the luxury of that. The New Orleans arts community has embraced Prospect from the beginning, and we’d like to give back to that.”

Fagaly died unexpectedly on May 17, 2021, at the age of 83; he had just published The Nightcrawler King, Memoirs of an Art Museum Curator, chronicling, among other things, his years at NOMA and the building of the museum’s substantial African art collection.

“Bill moved to New Orleans less than a year after [Hurricane] Betsy,” Alfieri said. “He took the lowest-paying job offer he got, because he thought that an African-American city deserved African art.” 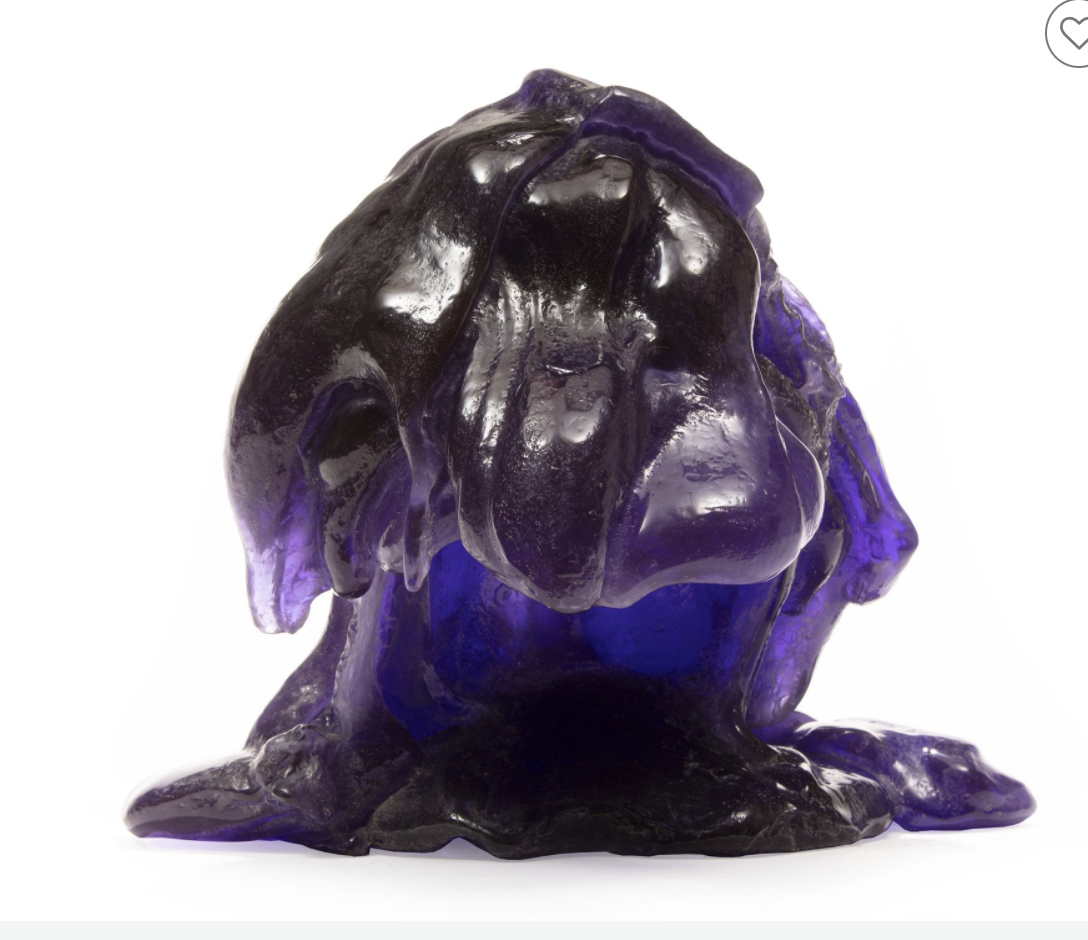 ‘Lion Paw’ by sculptor Lynda Benglis is among works on sale. (Photo: nealauction.com)

It was the kind of cause-oriented thinking that characterized pretty much anything Fagaly did. He was an early and fervent supporter not only of Prospect New Orleans, but also an array of other projects and concerns.

“His interests were wide and varied,” said Alfieri. “Whenever he had his patio doors open, you could see they were covered in decals. Climate, environment, social justice – he cared about so many things. He chained himself to a column when they were proposing to put an overpass through the French Quarter.”

Fagaly’s artworks reflect the same kind of passion and curiosity.

“The sheer breadth of this collection is amazing,” Alfieri said. “There’s oceanic art, American contemporary art, folk art. And it was not just about the art, but the way he arranged it. Bill did not create hierarchies, but rather forced connections between objects that started conversations. So you might have an 18th-century drawing next to a tchotchke from his travels.”

Alfieri initially demurred when Fagaly asked him a few years ago to be his executor. He relented, he says, only by getting Fagaly to agree to digitize and archive the collection. “He had a hand-written card on every object, and Tina Freeman had photographed it all. But we worked with an archivist over a couple of years.”

The process was extensive; Fagaly was a keeper. “Whenever he would go somewhere he would keep the most incredible diaries,” Alfieri said. “They’re like scrapbooks. He was a scholar – he didn’t just look at things. He loved the culture bearers as much as the culture. He could visit the philanthropy crowd and then go to a Mexican wrestling match in the French Quarter. His exuberance stood out.” 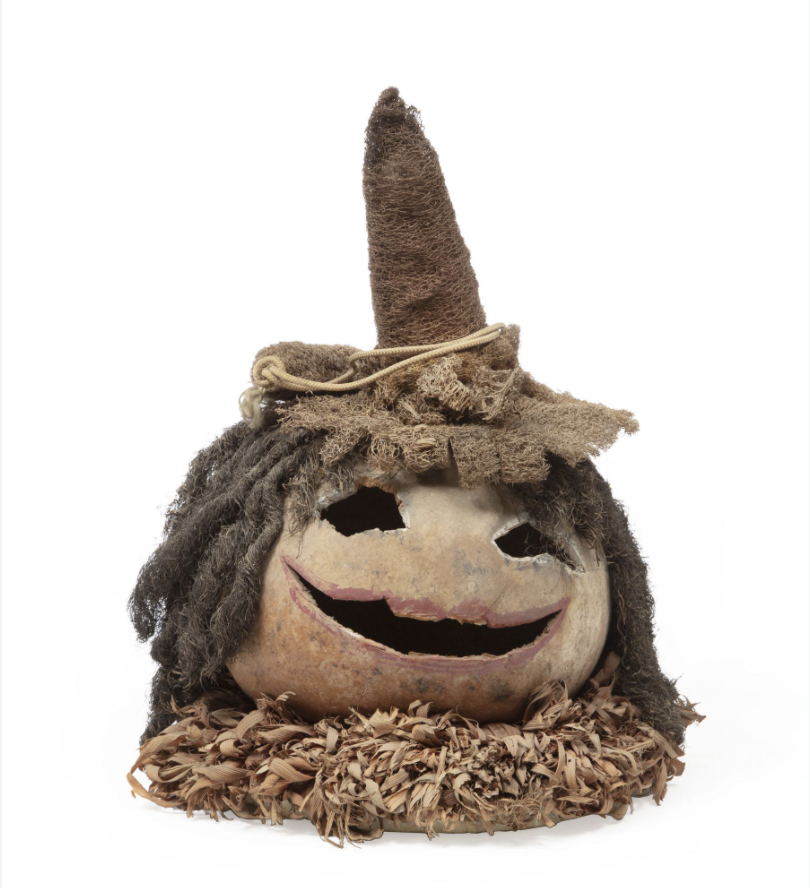 A carved gourd by Clementine Hunter is among works on sale at Neal Auction. (Photo: nealauction.com)

Alfieri, if given one word to describe his friend, would choose Intrepid. It’s a nickname that was given to Fagaly by Roy Sieber, his first professor of African-American art at Indiana and later the associate director of collections at the Smithsonian.

“He was incredibly intrepid in all areas of life,” Alfieri explained. “He rushed in. I’d pick up a photograph and go, wait, is that Bill drumming in Congo Square? [Sculptor] Lynda Benglis once gave Bill a lion paw cast in pigmented acrylic because, she said, he was a lion, a force to reckon with.”

That piece is among the many items in this weekend’s auction. The collection is eclectic, true to Fagaly’s tastes, ranging from Louisiana folk artist Clementine Hunter’s only known sculpture, carved from a gourd, to more contemporary works by artists such as Jacqueline Humphries and Skylar Fein, Dawn Dedeaux and George Dureau. There are antique quilts and baseball catchers’ masks, an album cover designed by Sister Gertrude Morgan, pieces of furniture, carvings, watercolors, pottery, and myriad pieces by American self-taught artists, for whom Fagaly had an infinite interest and regard.

“What really got Bill up and moving,” said Alfieri, “was the under-represented and the underdog.”

Art & Objects from the Nightcrawler King Collection: The Estate of Curator William A. Fagaly

What: A sale of pieces from the collection of the late NOMA curator Bill Fagaly

Where: Online at nealauction.com; in person at 4038 Magazine Street