Art and engineering merge into something special at new Sculpture Garden

When the New Orleans Museum of Art decided to expand its Sidney and Walda Besthoff  Sculpture Garden onto a 6-acre tract of land nearby in City Park, the big question became how to connect them. Because, while the two areas were adjacent, they were separated by a lagoon. There was a bridge, but it spanned the waters in the wrong direction.

The innovative solution? A walkway that dips deeply under the bridge, one that literally sinks below water level so that the lagoon laps at its concrete sidewall. The illusion of walking through the lagoon is enhanced by the fact that the concrete wall thins at the top, creating the sensation that all of this liquid is going to come gushing over or through at any moment.

It’s a wonderful metaphor for a city that sits below sea level, and an appropriate statement for a manmade landscape that marries nature, art and engineering into a seamless whole.

The new section of the sculpture garden differs structurally and conceptually from its predecessor: It’s more open, has more water (the lagoon contains 3,057,483 gallons of water), and offers views that are expansive and seemingly limitless. The 26 new sculptures are pointedly placed, with each designed to occupy its bit of terrain with command and authority. That makes the works more conspicuous: rather than tucking them into the landscape, they seem exposed.

And sometimes startling. A giant white skull by Katharina Fritsch sits serenely next to what museum workers are calling the Moses bridge — stepping stones among the rushes that literally make you feel as though you are walking on water. Elyn Zimmerman’s glass bridge recreates, in colorful whirls, sections of the river taken from old Fiske maps. Jeppe Hein’s mirrored labyrinth offers a tantalizing see-through steel wall of vistas and reflection.

The expansion captures much of the starkness and expansiveness of Louisiana wetlands, with artful engineering that controls the landscape but doesn’t subdue it. Spanish moss and massive old oaks are juxtaposed against the clean lines of walkways and bridges that circle in and around the large lagoon and meander into the distance. French drains and sophisticated pumps keep the water circulating properly and at bay, while most of the works remind us of the complexities of living in a coastal environment. Views across the park and glimpses of the city skyline bring home the fact that this is not a private landscape, but part of a larger whole.

There’s an indoor component to the garden, too: A curved steel art gallery with floor to ceiling glass windows holds sculptures from NOMA that complement the outdoor installations. The entrance is marked by a 60-foot mosaic mural by  Teresita Fernandez. Inside, a standout piece is the floor-to-ceiling tracing of the Mississippi River in green glass beads by Maya Lin, who designed the Vietnam Veterans Memorial in Washington D.C.

Ultimately, this new addition captures the salient points of both environment and culture. It reminds us that, at its most inspirational, our world weaves together landscape, human invention and creative endeavors of the spirit and mind.

The entrance to the new section of the Sculpture Garden can be found at the back right side of the New Orleans Museum of Art in City Park. It’s open and free to the public seven days a week. Artists featured in the expansion include Larry Bell, Tony Cragg, Johan Creten, Katharina Fritsch, Frank Gehry, Jeppe Hein, Georg Herold, Thomas Houseago, Shirazeh Houshiary, Baltasar Lobo, Robert Longo, Gerold Miller, Beverly Pepper, Pedro Reyes, George Rickey, Ursula von Rydingsvard, Sean Scully, Yinka Shonibare, Frank Stella, Hank Willis Thomas, Bernar Venet, and Fred Wilson. A work by Ugo Rondinone will be installed in the garden in late 2019. Two new works have been commissioned for the site: a 60-foot-long mosaic wall by artist Teresita Fernández, and a glass bridge by Elyn Zimmerman. NOMA worked on the expansion with design partners Reed-Hilderbrand and Lee Ledbetter & Associates. The construction partner was Palmisano.

Below is an interview with NOMA director Susan Taylor about the new expansion, first published last year. 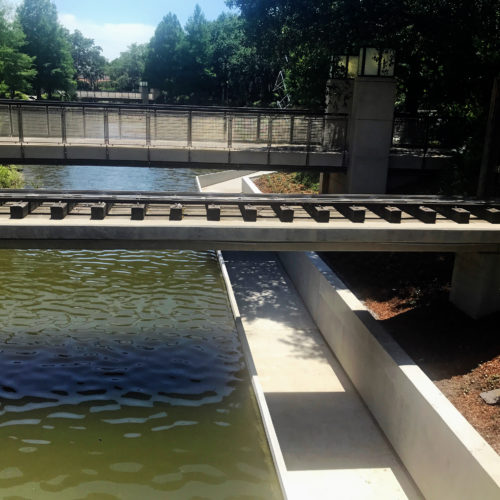 Water laps at submerged pathway into the expansion of the Sculpture Garden. (Photos: Renee Peck) 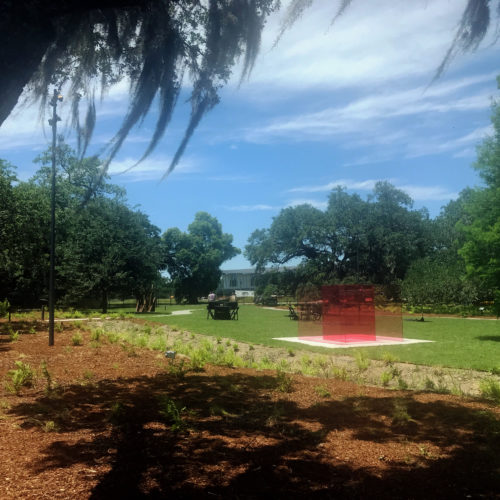 Larry Bell’s work can be seen from around the park. (Photos: Renee Peck) 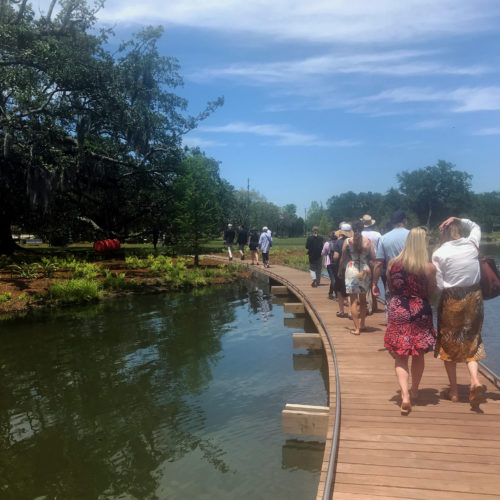 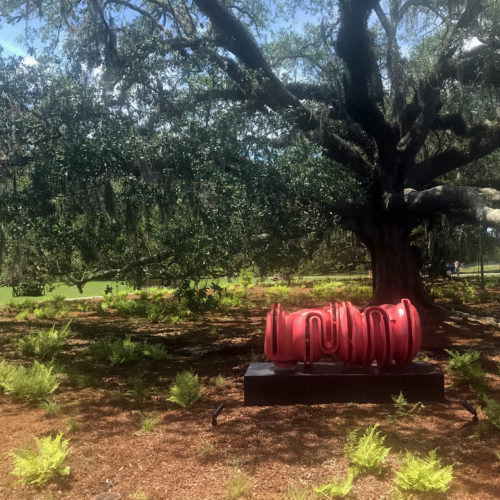 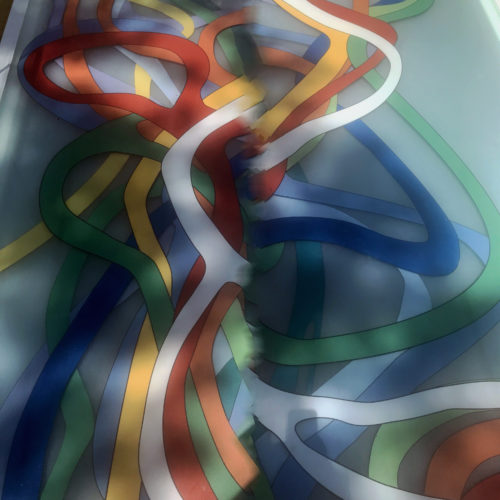 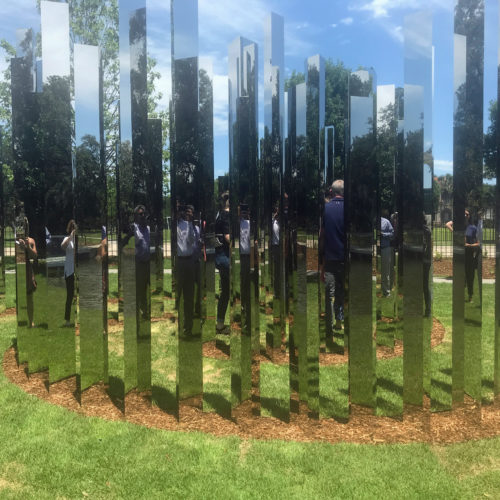 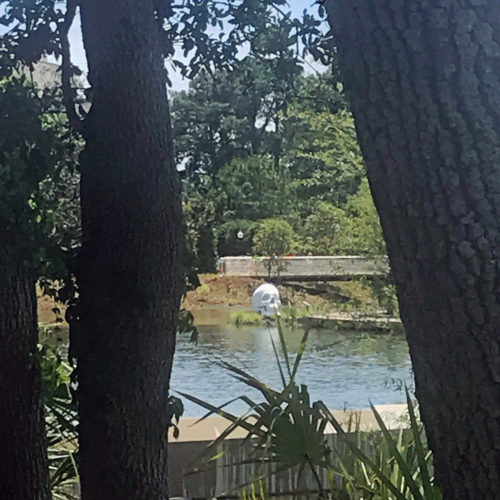 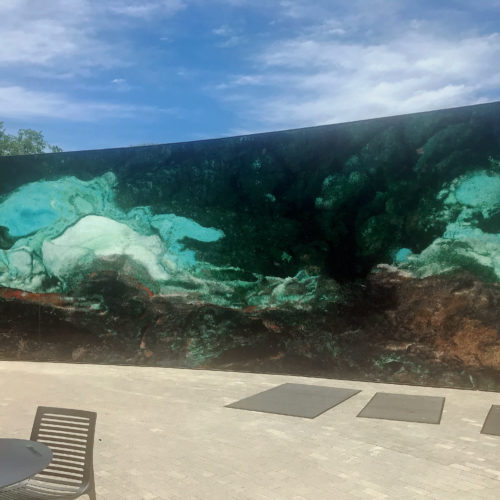 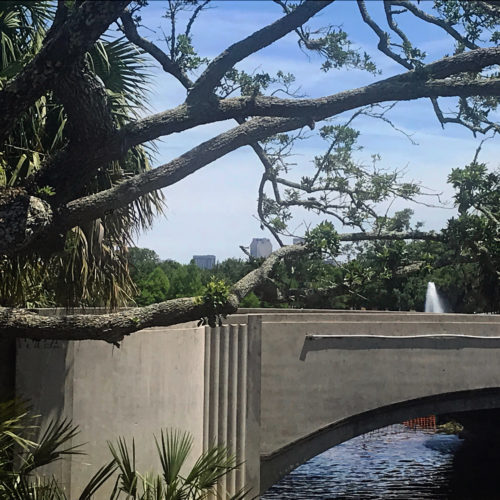 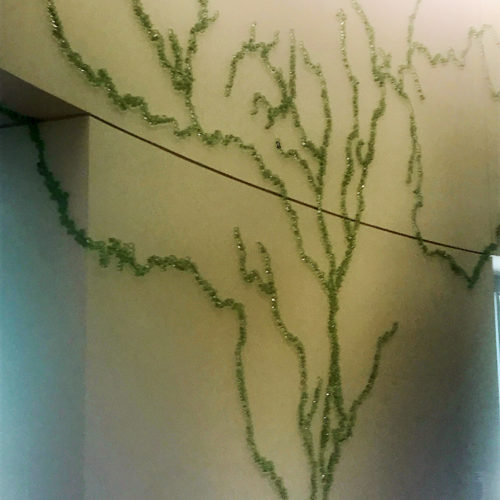