Washed Ashore: A message in our bottles

Angela Haseltine Pozzi knew just what to do with the two fish-tote lids that washed up from the sea. They were exactly the color she’d been looking for.

Steve the Weedy Sea Dragon, bearing a deep-red fish-tote spine, soon emerged beneath the sculptor’s adept hands, fashioned within the walls of a 424-quare-foot yurt that sits on her Oregon property.

“A real sea dragon is 18 inches, so I made him 18 feet,” Pozzi says as she gazes fondly at Steve; all her creatures have names, and personalities. “His appendages are made with scuba flippers I’d been saving for years. Male sea dragons carry the eggs, so his are made with plastic water bottles and caps. He’s a real animal, even if he looks like something from Dr. Seuss.”

This month the half-ton Steve and eight other creatures arrived aboard flatbed trailers to join a plastic menagerie that first arrived at the Audubon Aquarium of the Americas (where there are now 14 sculptures) and Audubon Zoo (two) in July. Like his brethren, Steve is fashioned completely from ocean debris – all the flotsam and jetsam discarded by careless humans that make up the endless plastic pollution bobbing in our waterways and littering our beaches.

“The entire project is purely educational,” Pozzi says about her sculptures, which travel the country in four rotating exhibitions. “The mission is to help save the ocean, to reach people, to talk about plastic pollution. I want to change lifestyles.”

Pozzi started The Washed Ashore Project eight years ago. She had moved to Oregon after the sudden, devastating death of her husband, Craig. She thought the ocean might heal her; instead, she found beaches littered with plastic refuse and an ocean itself in need of healing.

So she took her 30 years as “an art teacher without a budget,” one who knew how to be resourceful, and began turning plastic pollution into whimsical but faithful representations of the animals affected by it. As lead artist, Pozzi does all the heads and the detail work on the sculptures, while volunteers arrive in steady streams to workshop pieces like froth bubbles or seaweed. So far, they’ve sorted 21 tons of garbage and produced more than 70 animals.

No two are alike: As Pozzi points out, she and her volunteers are working with garbage (21 tons, so far). “You can’t just order what you want.”

And she’s strict about education and realism, researching each animal meticulously to make sure she gets it right. “I can be fun with it, but I don’t want these to be caricatures.”

She doesn’t paint or manipulate any of her raw materials. “Plastic comes in every color, and seduces us every day.” She puts clever use to everything from Gatorade bottles to old tennis balls, chewing tobacco containers to used shotgun shells discarded by duck hunters. And, of course, flip flops and toy shovels and drink bottles and all the other things that thoughtless tourists leave in the sand. Zorabelle the Penguin boasts a couple of toilet seats. Pozzi can look at a toy tire and see fins. When five bright orange rubber boots washed in, she thought, “I can make a clownfish!”

Perhaps it’s no wonder that Pozzi’s favorite three artists are Dr. Seuss, Alexander Calder and Louise Nevelson. Her pieces echo the whimsy of the first, the lightness and movement of the second, the puzzle-like intricacy and dexterity of the third. She shares an affinity for message-driven works with all three.

“Art is an international language,” she says. “It reaches into people’s heart.”

Her works are accessible, meant to be touched and discussed. Visitors can walk through a whale skeleton made of bleach and water bottles, or play musical branches of a sea plant. Stella the Seahorse, she says, “is all about being a mama” — thus the pacifiers and baby bottles used in her construction. Heads especially get recognizable plastic objects: “I try to put the garbage in your face,” says Pozzi.

“It’s beautiful and horrifying at the same time,” she says. “Alarming and depressing are good adjectives. I want that reaction.”

She chooses species affected by pollution, but they aren’t all sea creatures. (She’s particularly proud of her river otter’s realistically rendered feet.) Eighty percent of the garbage that ends up in our oceans, she points out, starts from land sources – rivers or garbage dumps.

There are, of course, audience requests. “Everyone wanted a great white shark,” she says. So she made Greta, “a fierce female,” to show that great whites are not always male. She has a wish list, too, currently topped by a Komodo dragon.

Washed Ashore, Pozzi says, has become her life’s work. And it doesn’t look like she’ll be short of resources any time soon. According to a 2016 McArthur Foundation report, by 2050 there will be more plastic in the ocean by weight than there are fish.

“We’ve gotten into a mentality of throwing things away,” Pozzi says. “If you think about eliminating all plastic, you can’t. But we can reduce it, we can rethink it. We just have to do it one step at a time.”

Washed Ashore will be on exhibition through April; there are 14 sculptures at the Audubon Aquarium of the Americas, and two at the Audubon Zoo. For more, visit washedahore.org. 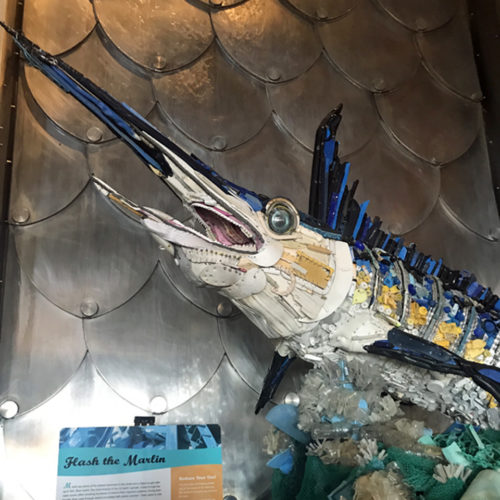 Flash the Marlin sits in the Aquarium of the Americas lobby, one of a dozen sculptures made by artist Angela Haseltine Pozzi from trash that washed ashore. (Photos: Renee Peck) 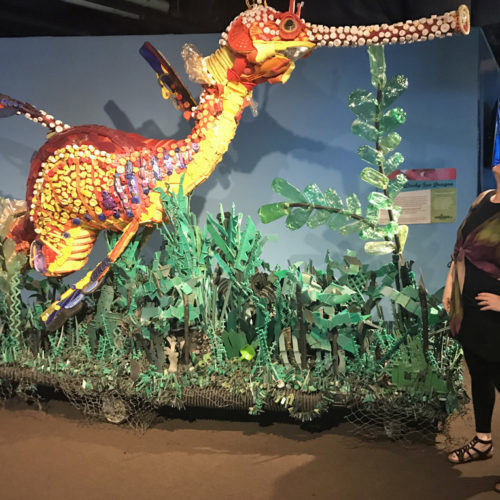 Steve the Weedy Sea Dragon is among a number of new sculptures that joined the Washed Ashore exhibition this month. (Photos: Renee Peck) 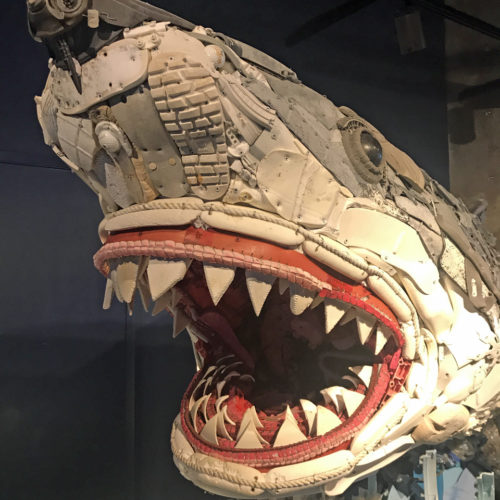 ‘Everyone wanted a great white shark,’ noted artist Angela Pozzi. So she made a female one. (Photos: Renee Peck) 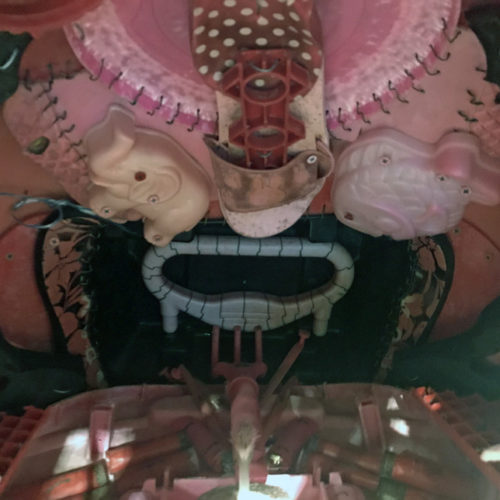 Artist Angela Pozzi spent a month inside the mouth of Greta the Great White Shark, getting the details right. (Photos: Renee Peck) 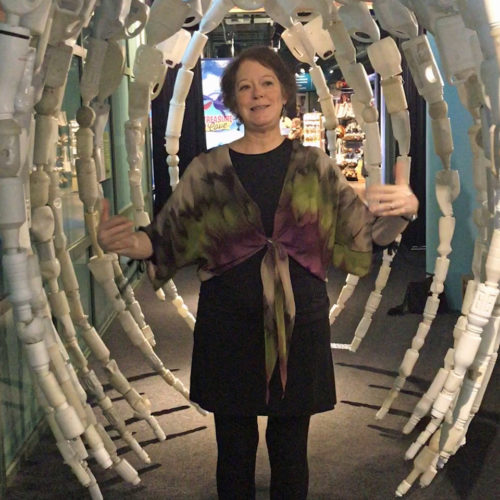 Artist Angela Haseltine Pozzi stands inside the carcass of a whale she created mostly from bleach bottles. (Photos: Renee Peck) 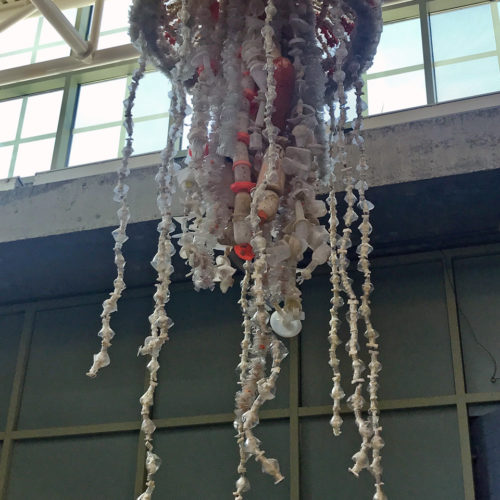 Jellyfish made from plastic bits of pollution hang throughout the Aquarium of the Americas. (Photos: Renee Peck) 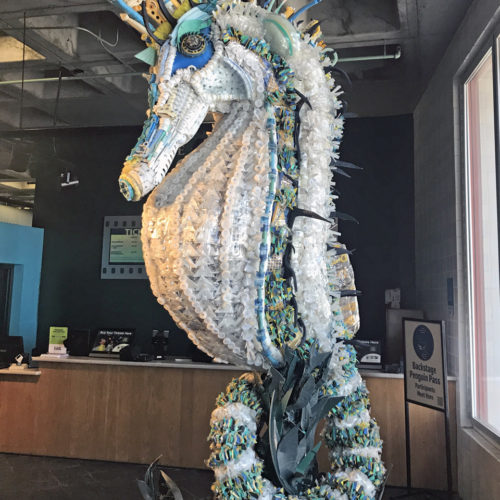 Stella the Seahorse is one of artist Angela Pozzi’s favorites. She incorporated geometrically patterned plastic drink bottles, because seahorses are among the few sea creatures with geometric markings. (Photos: Renee Peck) 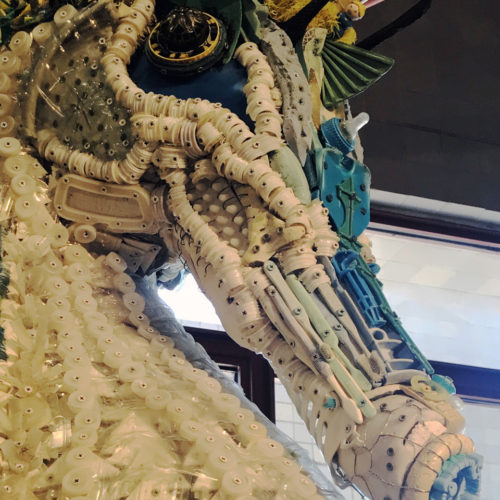 Stella the Seahorse is a ‘fierce mama,’ says artist Angela Pozzi. Thus the pacifiers and baby bottles in her face. (Photos: Renee Peck) 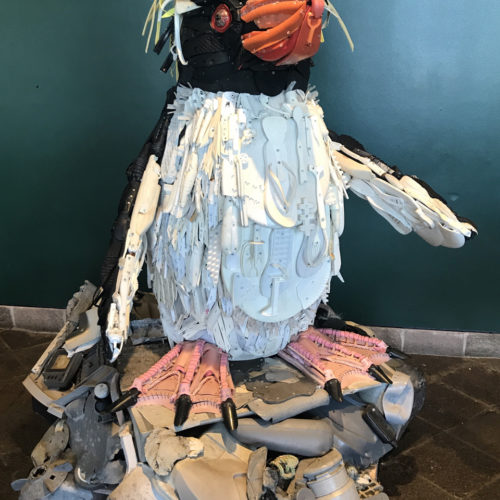 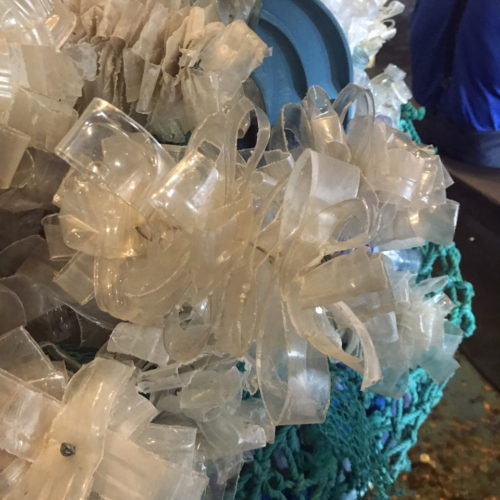 ‘Froth kebobs’ and other repetitive details are assembled by volunteers. (Photos: Renee Peck) 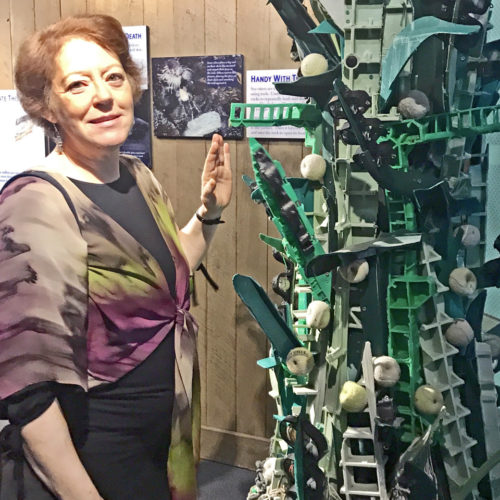 Artist Angela Pozzi’s sculptures are meant to be touched; this one is musical. (Photos: Renee Peck) 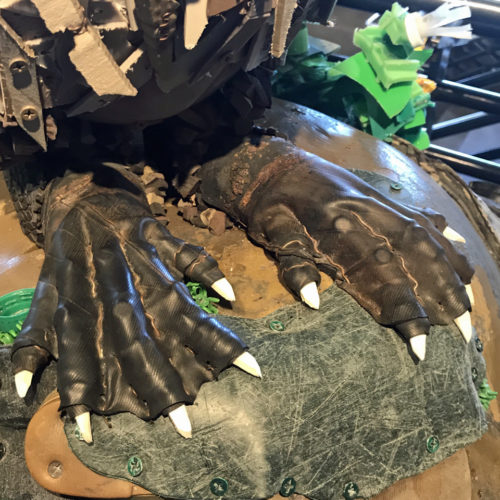 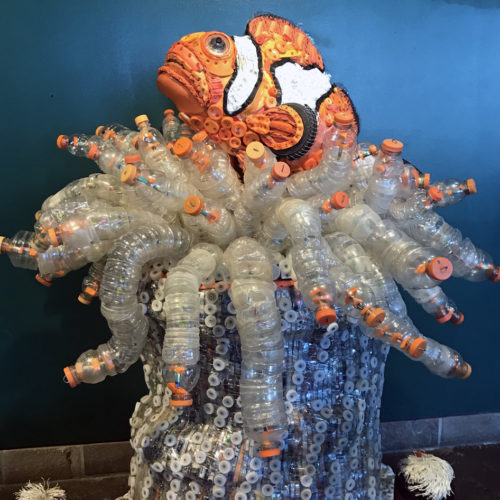 When orange rubber boots washed up, artist Angela Pozzi realized she had the ingredients for a clownfish. (Photos: Renee Peck)