Craving some Carnival or is it Carnaval? Mardi Gras trek from NOLA to RIO

Does New Orleans do Mardi Gras better than, say Brasil? Well, Renee Peck has been to both, and here’s her breakdown! 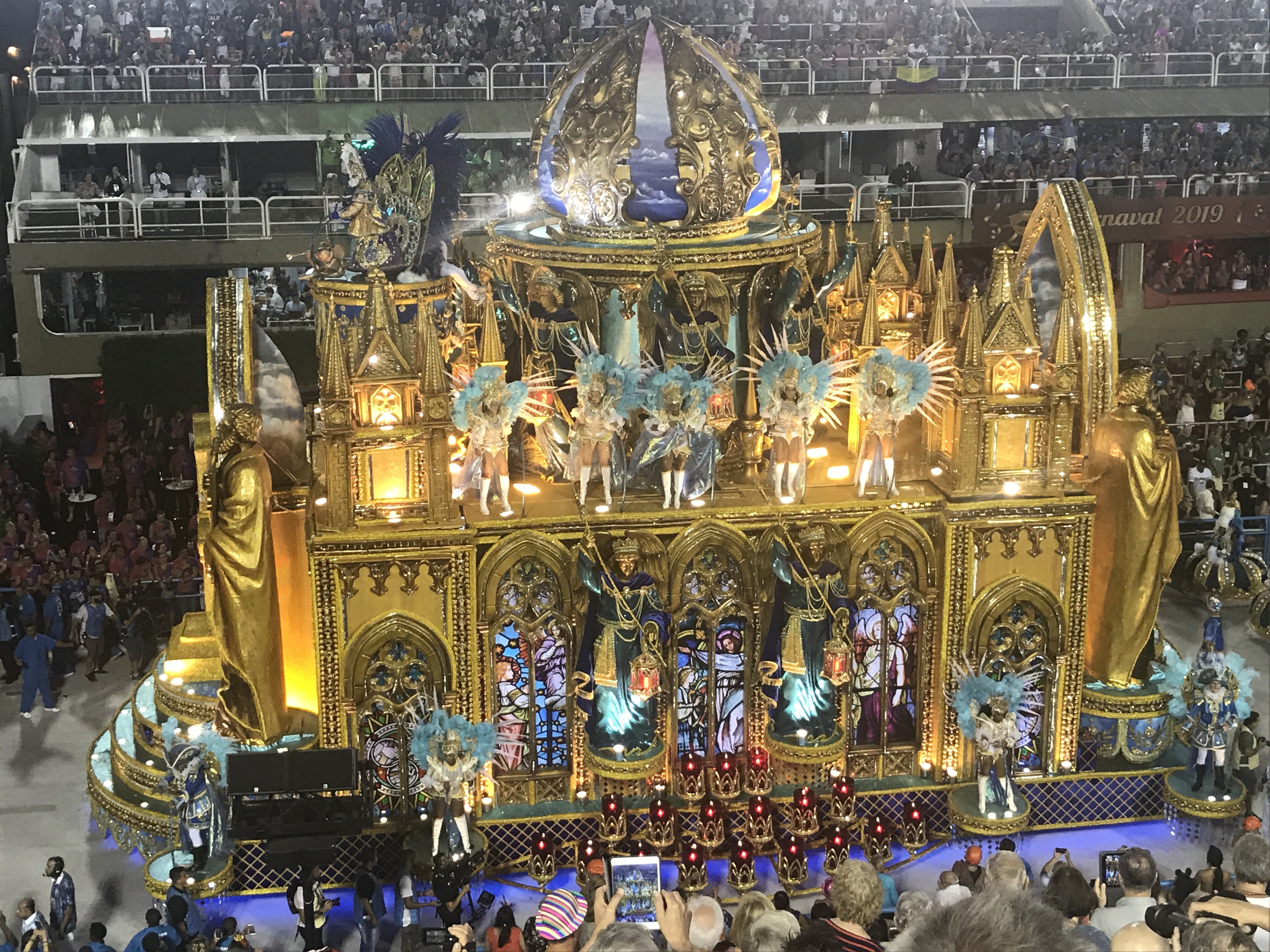 I went from Carnival to Carnaval.

Yes, I left New Orleans on Saturday as soon as Iris rolled by, with Tucks closing in. We left behind a week of Red Flyer wagons with grandkids tucked among the beads and blinky lights and stuffed animals, a houseful of guests from here and there camped out on couches and air mattresses, tables littered with boiled crawfish and king cake and a growing tower of empty beer cans. We steered out of the Uptown parade box and threaded floats and routes to reach the airport, where, 4,805 miles and 18 hours later, we stepped off a plane at the Rio de Janeiro airport.

We were met by a tangible wave of steamy heat that felt eerily like what we had just left behind. And as omens go, it was a good one: There are many similarities between Carnival in New Orleans and Carnaval in Rio.

Carnaval in Rio is really two carnivals — the stadium gig and the street parties. The first is not unlike our superkrewe parades, and the second somewhat akin to our marching groups and social aid and pleasure clubs. The headline event at Rio Carnaval takes place over two nights in the Sambadrome, which seats about the same number of spectators as the Superdome, but in a linear fashion rather than round. It was built in the 1980s specifically for the Rio samba clubs to parade along. 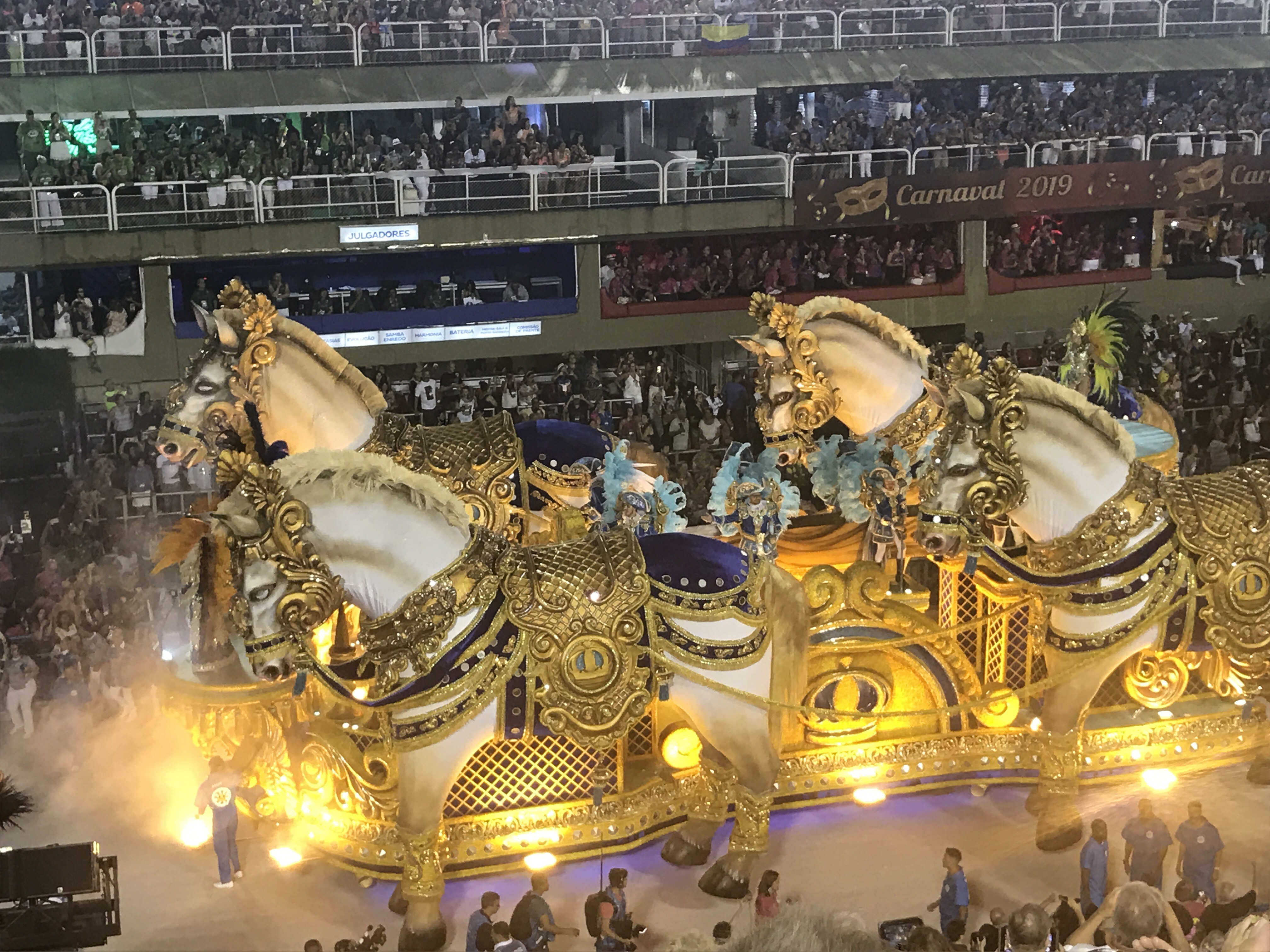 The Sambadrome in Rio De Janeiro. (Photo by: Renee Peck)

Of the several dozen samba clubs in Rio, only the elite top 12 (the “Special Group”) get to roll on Sunday and Monday before Mardi Gras, six each night. It’s a competition, and the rules are strict. Each club must start and finish the 700-meter route (about half a mile) in exactly 1 hour and 22 minutes. Each parade has a theme, and points go to creativity, choreography, enthusiasm, spacing, timing and how well they tell their story. Think 610 Stompers meet Bacchus, with costumes by the maids of Endymion. And, oh yes, a cast of thousands. Each samba club parades with 3,000 to 5,000 members, some dancing atop floats, featured performers performing samba routines in between, the whole strung together with groups of 50 or 100 or 300 or more in matching costumes replete with feathers, sequins, giant headdresses, hoop skirts, life-sized stuffed animals, butterfly wings, capes — crazy, loud, outrageous, festive gear, any one of which would surely hold pride of place in any New Orleans costume closet. A panel of judges scores each parade, and a grand winner is announced to great fanfare on Ash Wednesday morning. Snagging the top trophy brings a monetary prize, bragging rights and lucrative sponsorships. Did I mention that all of this starts at 9:00 PM and runs til 5:00 AM?

The street parades, or “blocos,” are the yin to the Sambadrome yang. Spontaneous, free-flowing, boisterous, unpredictable. One guide said there’s a calendar and an app to help you find them, but for us, it was a matter of wandering a deserted, closed-down city on the one hand and then, on the other, suddenly running into a massive flow of half-clothed humanity, dancing to the beat of a drum or two tucked somewhere into its center, the periphery serviced by peddlers hawking beer. A Monday morning outing and the return Monday night (or rather Tuesday morning) from the Sambadrome both involved unexpected collisions with these roiling street parties; traffic halted, routes were re-planned, you couldn’t move forward or back but just had to wait for all that happy humanity to flow around and past and by.

With that primer in mind, I offer my own personal take on NOLA Carnival versus Rio Carnaval.

The tutu should be relegated to international diplomatic status, as it brings together these two Mardi Gras crowds seamlessly (sorry). In both cities, the tutu is the unisex, near-ubiquitous attire. Feathers and masks run a close second in both places. Street costumes in New Orleans trend more satirical/statement-based; in Rio they run more to color and flash. And in Rio, bare skin is basic, with the bathing suit rather than the bodysuit serving as costume foundation.

The samba club costumes rise to another level. Sure, our krewe members dress up, with LED lighting on the breastplates and neon wigs. But their over-the-top samba costumes are couture compared to our uniform-store lookalikes. Just wow. 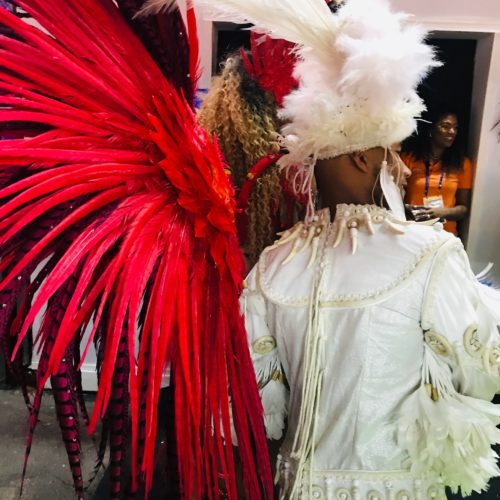 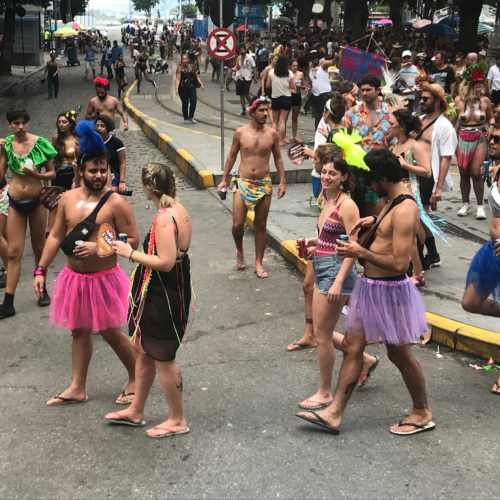 The tutu seems to be a ubiquitous costume choice no matter what continent you are on. (Photo by: Renee Peck) 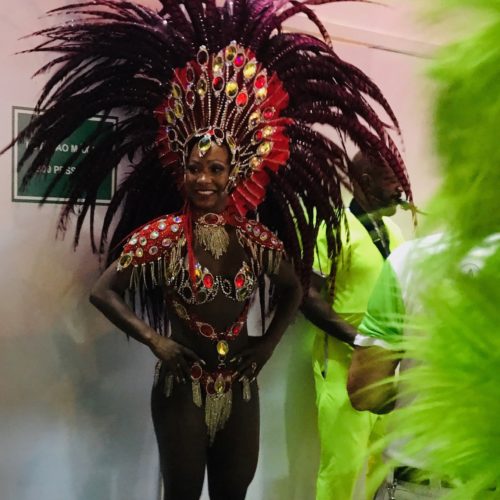 Our floats are pulled by tractors, theirs by hand. Yep, these Brazilian truckbed-based behemoths are pushed by human beings. Don’t let that fool you into thinking ours are better. The Sambadrome floats were simply dazzling. They pivot, have stages up top that rise and tilt, revolve, stream special effects. My favorite: A triple float led by four giant white horses that rolled their eyes, pawed their hooves, shook their heads as they pulled a gargantuan royal coach, followed by a cathedral complete with stained glass windows. Runner-up, a giant god (I guess?) lowering his lips to a basin of water that overflowed into a waterfall. Did I mention that there are dancers on all these moving stages, making samba moves even as the water flows around them?

Each samba club has maybe half a dozen floats, as opposed to our several dozen. But sorry, Bacchus, Endymion and Orpheus, I have to give this one to Rio. Especially since floats are used in the competition just once, then jettisoned for new themes the next year. 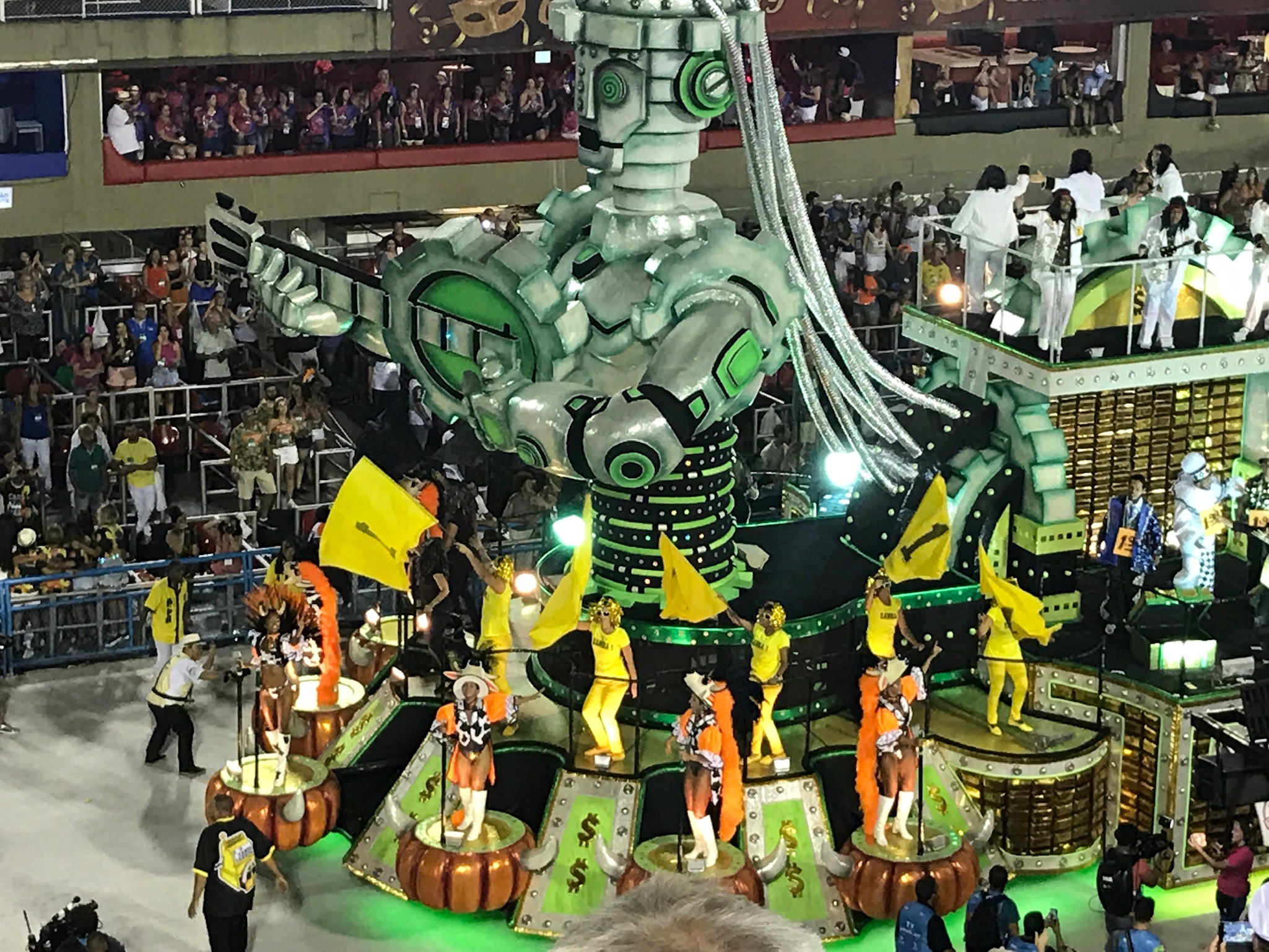 A different kind of float for Carnaval that moves and is maneuvered by hand. (Photo by: Renee Peck)

In NOLA, you get randomly stopped by floats being re-positioned. In Rio, you get randomly stopped by …. floats being re-positioned. And in both cities wandering marching groups can interfere with personal logistics. In Rio, surge pricing for taxies and Uber mirrors the same trend in New Orleans. And since there are no “routes” for the public partying in Rio, it all becomes a bit hit or miss. If you’re on foot, you’re looking for the party; if you’re on wheels, you’re trying to avoid it. Talk about cultural similarities. 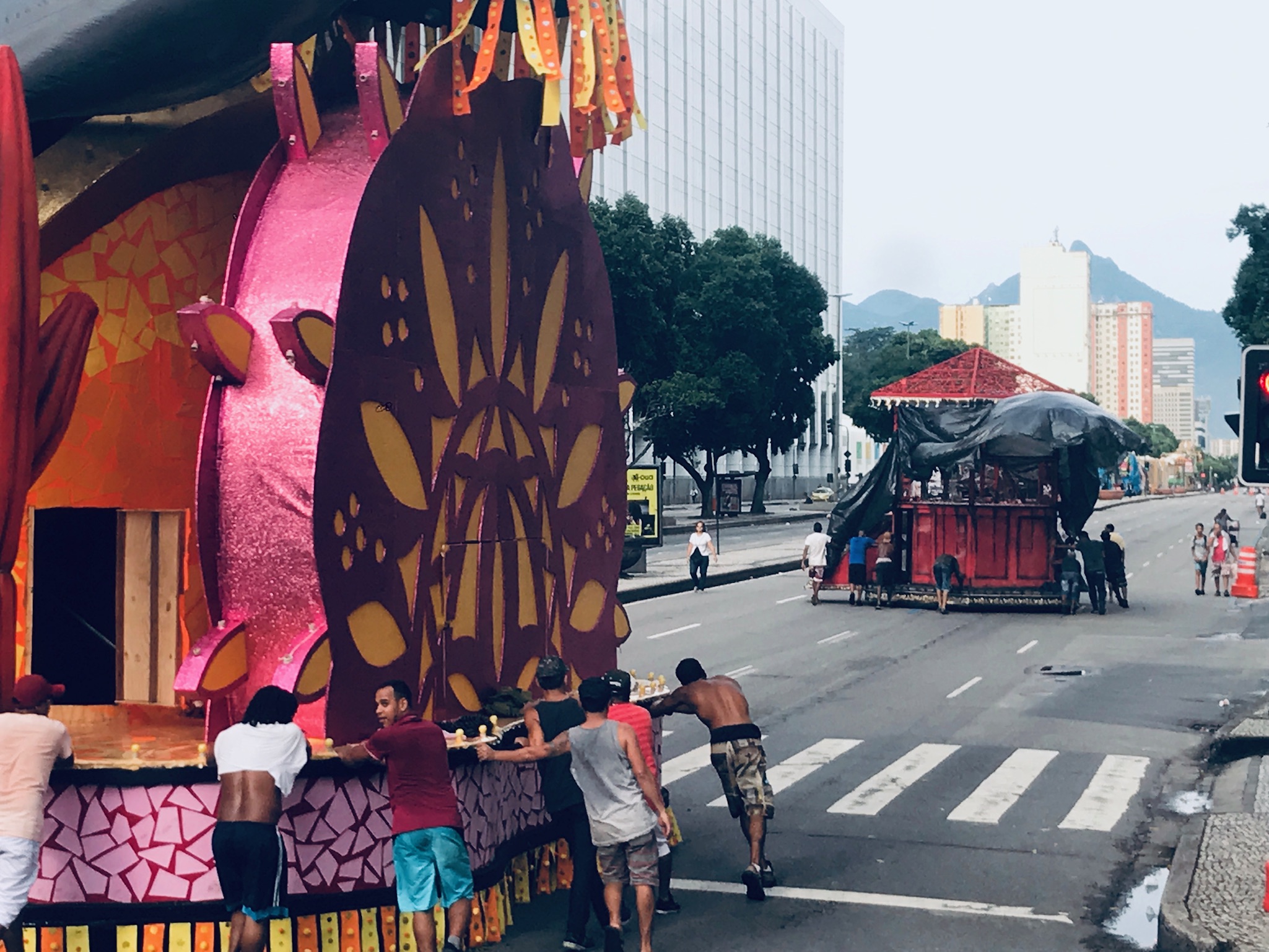 Floats love to stop traffic whether in New Orleans or Rio. (Photo by: Renee Peck)

The greatest free show on Earth

Carnival is billed that way in New Orleans, and it’s true: You don’t have to spend money to see and enjoy and participate. Sure, you can buy a parade-stand seat along St. Charles, but it isn’t mandatory. In Rio, the official show can cost hundreds of dollars. The Sambadrome has 13 sections, priced according to parade position. Some have reserved seating, while others are general admission. VIP boxes can set you back more.

So, we give the value for money award to NOLA. The street party in Rio is fun, but it’s only half the fun. You have to pay to play in the official Carnaval revelry at the Sambadrome.

We’re talking spirits here. NOLA visitors inevitably remark with wonder on the ability to walk around with alcohol in hand. Where else can you do that, they ask? Well, Rio at Carnaval for one. Beer is the beverage of choice, and someone is going to one day make a fortune introducing Brazilians to koozies. A footnote: Street partying in Rio is very much a youthful affair. I suppose the stamina needed to dance and drink for hours and miles is a gift of the young. 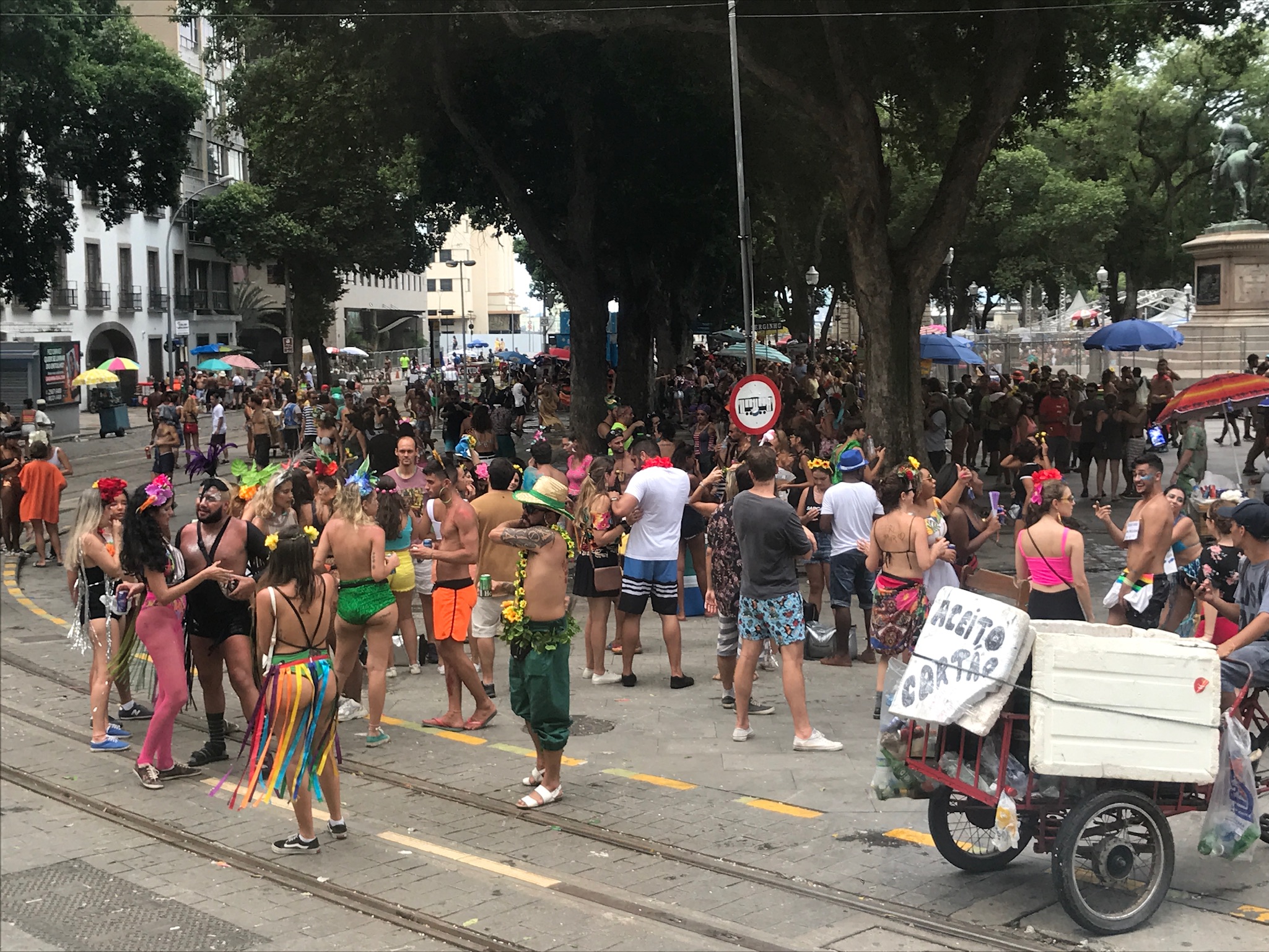 The youth hitting the streets for Carnaval in Rio. (Photo by: Renee Peck)

Both cities have Mardi Gras components that involve both spectacle and participation. But overall, I’d say that Carnival in New Orleans is more participatory — we throw, we catch, we get involved in a ritual that requires interaction between those parading and those on the street. In Rio, the Sambadrome competition is all spectator sport. You watch from a stadium, with the best bits showcased on giant monitors. Sure, the audience stands and dances as the parade passes by, but we do that, too, when “Get Crunk” roars through the Dome. At the Rio parades, the official ones, you go to see, not to be seen. In New Orleans, we are all part of the action.

Rio is more adult-oriented, though there wasn’t the nudity I’d expected. In Brazil, there are no beads, no ladders, no family gatherings or neutral-ground barbecues. In Rio, Carnival —at least in the Sambadrome — rises to the level of performance art. If the theatrics of Carnival in New Orleans are mostly improv, then consider the theatrics of Carnival in Rio more operetta. Dramatic, both, and well worth the price  of admission.

Those floats in the Sambadome put us to shame! Amazing pics and got a real feel for how different these 2 carnivals are.

carol pulitzer
Recent Posts on ViaNolaVie
Donate to ViaNolaVie!     GIVE BACK TO THE NEW ORLEANS PUBLICATION THAT’S ALWAYS GIVING!  ViaNolaVie,...