Katrina’s misrepresentation in the news 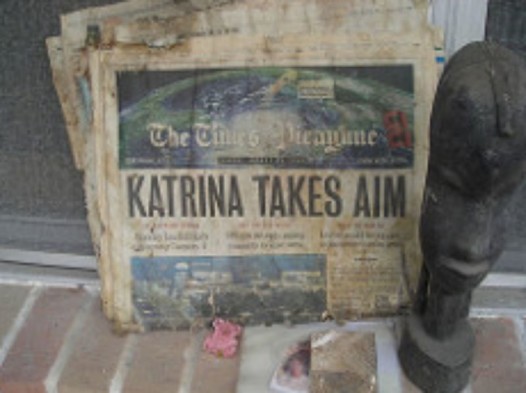 “Hurricane Katrina was the storm of the 21st century. It devastated an area the size of Great Britain. More than 1,800 Americans died. Three hundred thousand homes were destroyed. There was $96 billion in property damage. I served on the Louisiana Recovery Authority. I saw Congress write one big check and then skip town.” – Politician Donna Brazile

Contrary to popular belief, Hurricane Katrina wasn’t a natural disaster, but a man-made disaster. “With the right hurricane protection,” said Professor Raymond Seed, “the result of Hurricane Katrina in New Orleans would have been different: ‘We call it wet ankles.'”

Eager to air their drama-intensified stories, national news stations failed to inform the public about the real causes of the damage to New Orleans on August 29, 2005. Oftentimes, editors and producers get an early sense of a breaking news story and immediately make it their narrative. When conglomerate networks saw the spiral shape emerging in the Gulf of Mexico, they connected the dots between the hurricane and the floods and didn’t consider the role that the federal government played in this destruction.

For over a decade, there has been this misrepresentation of Katrina in the news. Broadcast networks have continuously shifted the blame away from the Bush administration and government officials and onto the storm itself. Striking about 45 miles southeast of New Orleans at Plaquemines Parish, Louisiana, Hurricane Katrina made landfall as a category 3 hurricane. When the storm finally approached the Louisiana region, it had already weakened from the anticipated category 5 conditions that everyone had feared. Feelings of relief filled the city when the storm initially passed, but no one was prepared for the drastic flooding that was soon to come. 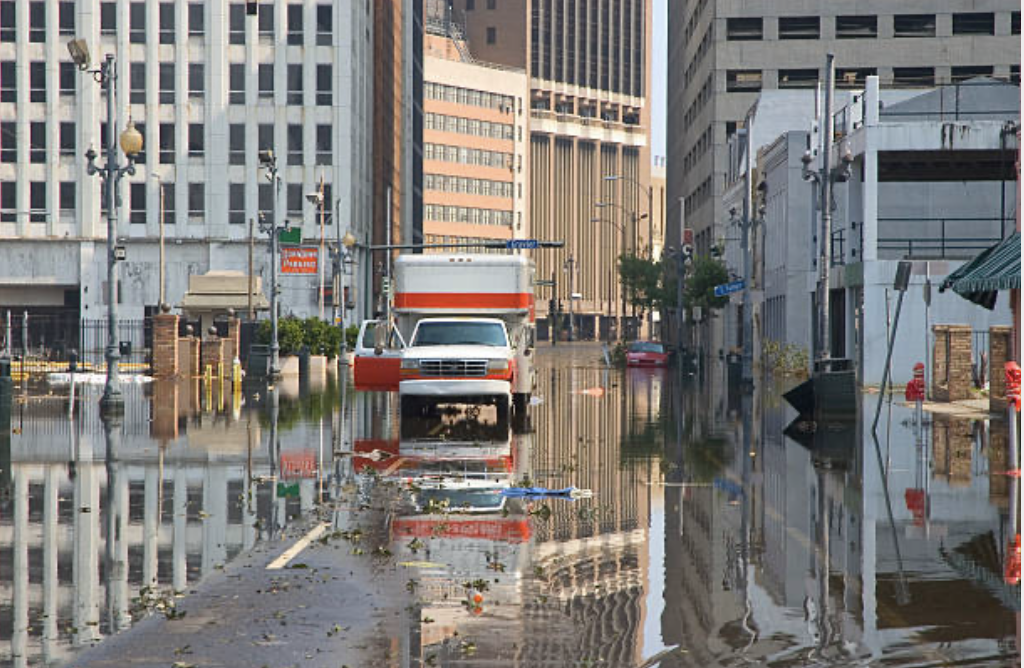 Photo of an abandoned truck in downtown New Orleans (Photo by: joeynick)

Numerous networks and publications were fast to report false coverage on the storm and damage to the city. On August 29, 2005, the day Katrina hit the areas surrounding New Orleans, The New York Times published an article titled “Hurricane Katrina Makes Landfall.” This article described how “Katrina slammed ashore early Monday and charged toward low-lying New Orleans with 150 mph winds and the threat of an extremely dangerous storm surge.”

The following day after the storm, The Guardian also published a news article titled “Katrina batters New Orleans.” The article says how “large areas of New Orleans were last night under water after Hurricane Katrina pummeled the city with winds of more than 100mph, causing damage to property and catastrophic flooding.”

These reports focused on the dangerous storm conditions, strong winds, and rain. At this time, reporters didn’t acknowledge the real culprit for this destruction: the poorly-structured and engineered levees that failed to withstand the storm.

The levees of Lake Pontchartrain and Lake Borgne have had a long history of problems. It wasn’t until Katrina hit that they would wreak havoc and end up flooding 80% of the city. Instead of using federal funds to strengthen these levees, the Bush administration decided to use the money towards other costly projects like the widening of the Mississippi River Gulf Outlet (MRGO). The federal government, along with the U.S. Army Corps, didn’t devote enough energy, money, and effort into protecting New Orleans. After Hurricane Betsy struck the city in 1965, the city’s hurricane protection systems were constructed. But in 2004 when the Army Corps requested money to upgrade the storm protection systems, the Bush administration was quick to reject the Corps’ requests for $22.5 million. Instead, the government supplied $3 million, which wasn’t nearly enough to protect a city that resides below sea level. As a result, the Corps had improper materials and designs for the levees. The soil and foundation for the walls were unstable, weak, and not rigid enough to provide sufficient protection. 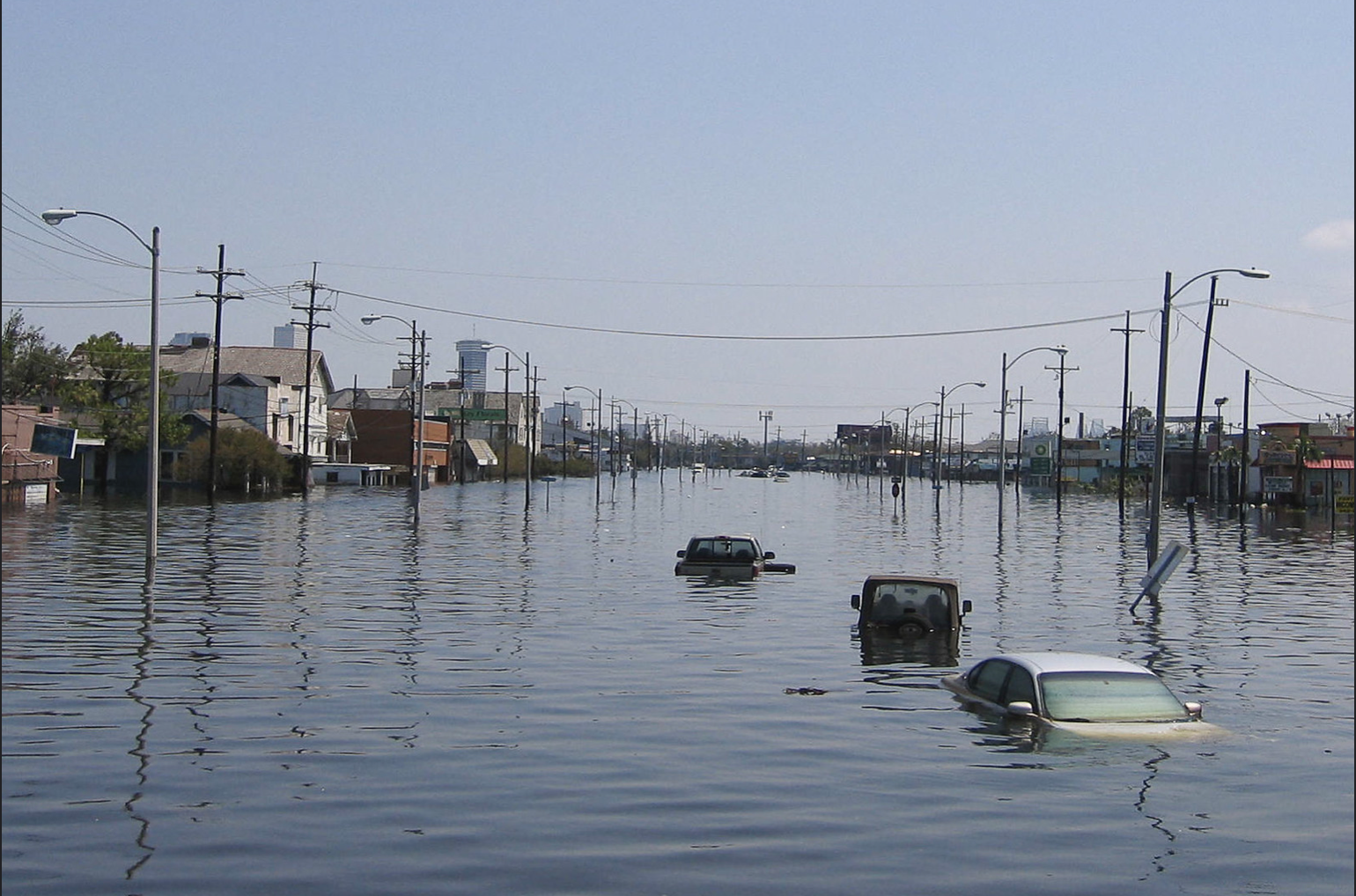 Photo of flooded cars on Claiborne in New Orleans (Photo by: Andrew Murr)

All of this information was omitted from reports and news articles following the storm. There was little mention of breaches in levees until word finally got around of the poor engineering of the city’s flood-systems. In June 2006, the Army Corps released a report acknowledging their failed attempts to protect the city and build sufficient structures. This new information showed how the media didn’t inform the public about the true causes of the destruction. American actor and singer Ben Vereen voiced his opinion that “Hurricane Katrina ravaged the Gulf Coast like no other storm in recorded history.” Under the assumption that Katrina caused all this property damage, Vereen and other citizens across the country had no idea that the budget cuts and levees played a major role in this disaster. In efforts to protect the federal government, perhaps from backlash and criticism, the media didn’t blame the Bush administration — instead, it blamed Katrina (an entity that couldn’t be held accountable).

Storms like Hurricane Katrina continue to strike cities across the nation time and time again. Within a time span of three months during hurricane season in 2020 Tropical Storm Marco, Hurricane Laura, Hurricane Sally, Tropical Storm Beta, and Hurricane Delta have threatened to hit New Orleans. New Orleanians saw firsthand how the poor administration of the federal government let its people down. The media failed to provide accurate information to citizens. With the proper care and funding, most of this destruction and flood damage could’ve been prevented and millions of lives could’ve been spared in New Orleans: one of the most beloved and visited cities in the country.

Flynn, Stephen E. “Explained: Why Katrina Was a Human-Made Disaster, Not a Natural One.” The National Interest, The Center for the National Interest, 26 Aug. 2015, https://nationalinterest.org/blog/the-buzz/explained-why-katrina-was-human-made-disaster-not-natural-13705.

It’s not surprising that the News and federal gov covered up its part in the tragedy of Katrina. To add insult to injury, they dropped the ball when it came to helping the people of New Orleans after the storm. There’s no way in this day and age we should have lost 1800 plus people in a hurricane. Not to mention over 300,000 homes and businesses. The Bush administration hides from its decision not to give the city the funds they asked for to help strengthen levees and such a year PRIOR to Katrina.

Lisa Hite
Recent Posts on ViaNolaVie
Donate to ViaNolaVie!     GIVE BACK TO THE NEW ORLEANS PUBLICATION THAT’S ALWAYS GIVING!  ViaNolaVie,...