And in this piece, we’re unmasking the story of the mask. 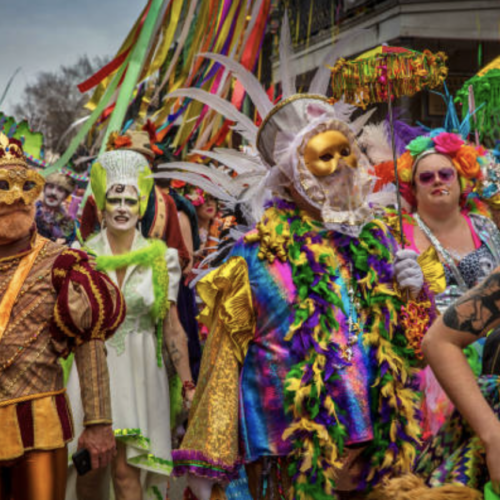 Masked attendees at the Society of Saint Anne parade during Mardi Gras on February 25, 2020 (Photo by: Barry Lewis) 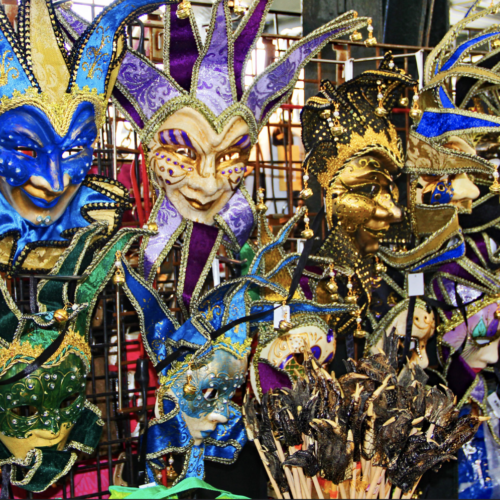 Mardi Gras masquerade masks on display at the French Market in New Orleans (Photo by: Ellsasha) 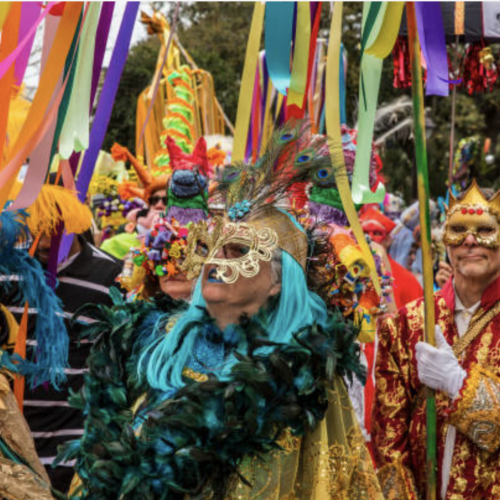 Festival goers wearing masks at the Society of Saint Anne parade during Mardi Gras on February 25, 2020 (Photo by: Barry Lewis)

“Life is a masquerade. Everywhere you look are people hiding behind masks.” – Ridze Khan

“The longer a mask is worn, the more comfortable it feels and the harder it is to take off. In a world where beauty, success, and perfection are valued, it’s hard to remove the mask and reveal the real person behind the facade.” – Katlyn Pedroza, Mardi Gras: Inspiration to Remove the Masks We Wear

For centuries, masks have been worn by different cultures in tribal rituals, performances, and celebrations such as the Mexican Day of the Dead, Chinese New Year, Alaskan hunting festivals, and masquerade balls held at the Palace of Versailles. In New Orleans, Louisiana there has been a tradition of wearing masks long before the emergence of COVID-19 and the pandemic. Each year, approximately 1.4 million tourists flock to New Orleans to celebrate and partake in the city’s largest celebration: Mardi Gras. During the two-week celebration culminating on Fat Tuesday, festival goers dress from head to toe in over-the-top costumes, beads, feathers, masquerade masks, and the colors purple, green, and gold.

Revelers of the festival march up and down the streets of the city in jester and comedy masks, circus masks, and masks made of feathers, ceramic, and beads. Members of the city’s Zulu tribes paint their faces black as they prepare to gather and ride the city’s floats. Flambeaux walkers cover their faces with bandanas and ski masks to protect themselves from the flames of the torches that they carry. Cajun crowds cover their faces with wire mesh masks, hiding their human identities.

Adding an element of mystery and intrigue, masks allow people to hide in plain view and remain unrecognized. Mardi Gras face masks, also known as Italian ‘Carnevale,’ have continued to be a notable part of the festival, where all float riders and krewes are required by law to wear them.  During the festival, New Orleanians “shed their inhibitions and fully imbibe in the party-spirit” of the bustling and vivacious city. They have the freedom to embrace and be the person they want, whether real or made-up. 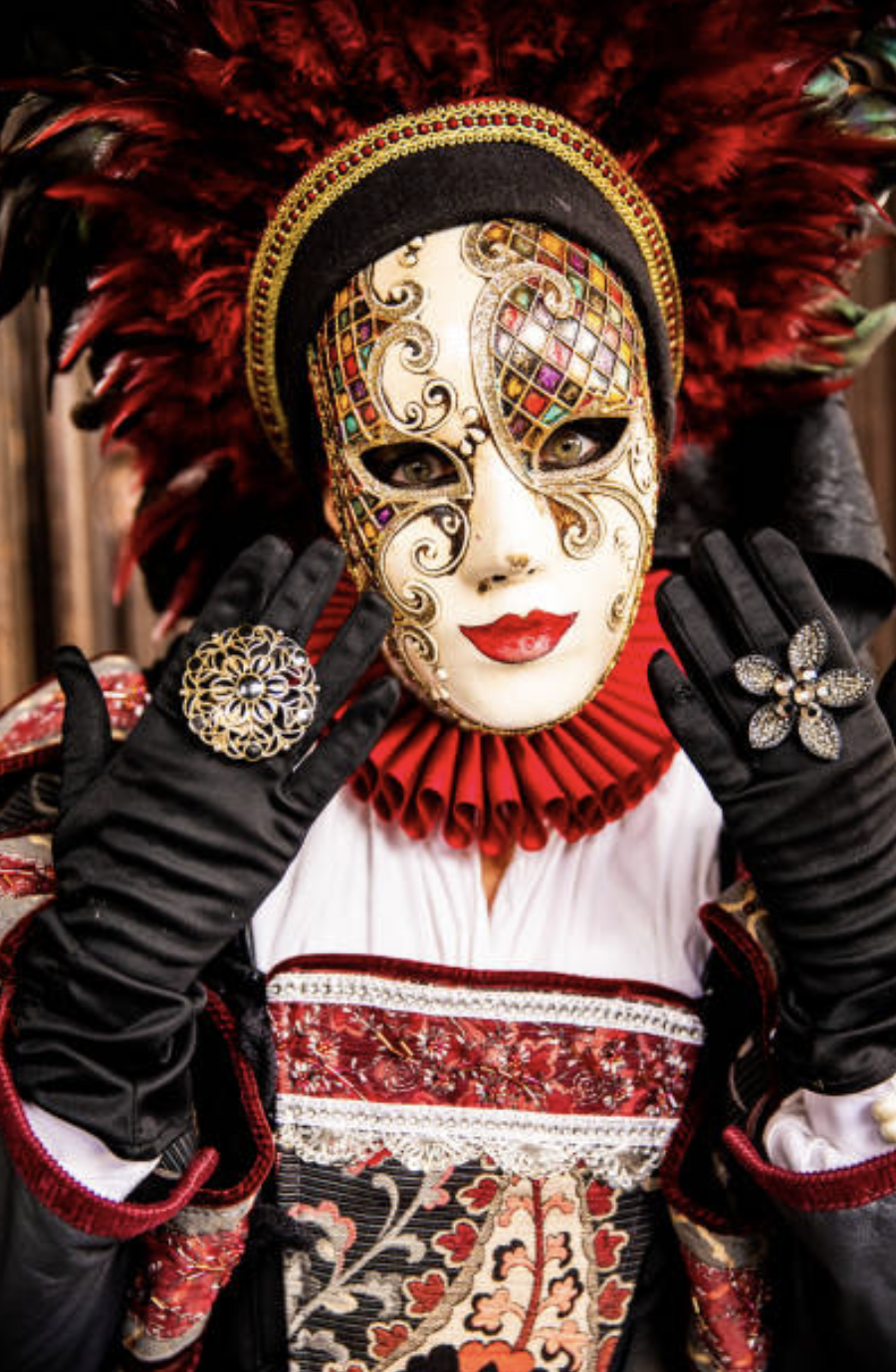 A masked person at the Carnival of Venice on February 22, 2020 (Photo by: NurPhoto)

This cultural phenomenon of wearing masks to disguise one’s identity has been seen throughout history in Ancient Greek theater, Japanese Noh theater, and in Shakespearean plays like Romeo and Juliet that featured Elizabethan masquerade masks. The hiding of an identity among a crowd has also taken place at the Carnival of Venice, one of the most famous festivals celebrated annually in the world. Ending with the Christian celebration of Lent, the Carnival of Venice was a celebration where Venetians engaged in delectable indulgences before they had to repent their sins. During this time, the festival and its celebrations were influenced by self-expression, the rise of humanism, and the breakdown of social classes in Italy.

During the Venetian Republic, the upper class consisted of wealthy aristocrats who wielded the power and had a majority of the say in government. Venice was predominately known for its success through mercantilism, controlled by the ruling class of these elite families. For the few days of the festival, merchants, peasants, and servants of the lower classes of the Republic were able to blend in with the aristocrats of the city and experience the liveliness of the carnival. For these shipbuilders, sailors, and boat rowers, masquerade masks represented absence of rules, freedom of action, and freedom of the self. After spending their days risking their lives working on the Eastern trade routes of the Mediterranean Sea, these servants were able to attend the parades without fear of being identified and punished. Venetians spent their time at the festival participating in activities like gambling, clandestine affairs, political assassination, and dancing and partying the night away.

During this Venetian carnival, festival goers wore masks of all shapes and sizes, but one of the most common masks was Colombina, or the Colombine. This half mask was designed to cover the wearer’s eyes, nose, and cheeks and was often decorated with gold, silver, beads, and feathers. Other common Venetian carnival masks of the time included the Dama, Medico della peste (Plague Doctor), Bauta, Moretta/Servetta Muta, and the Jester. 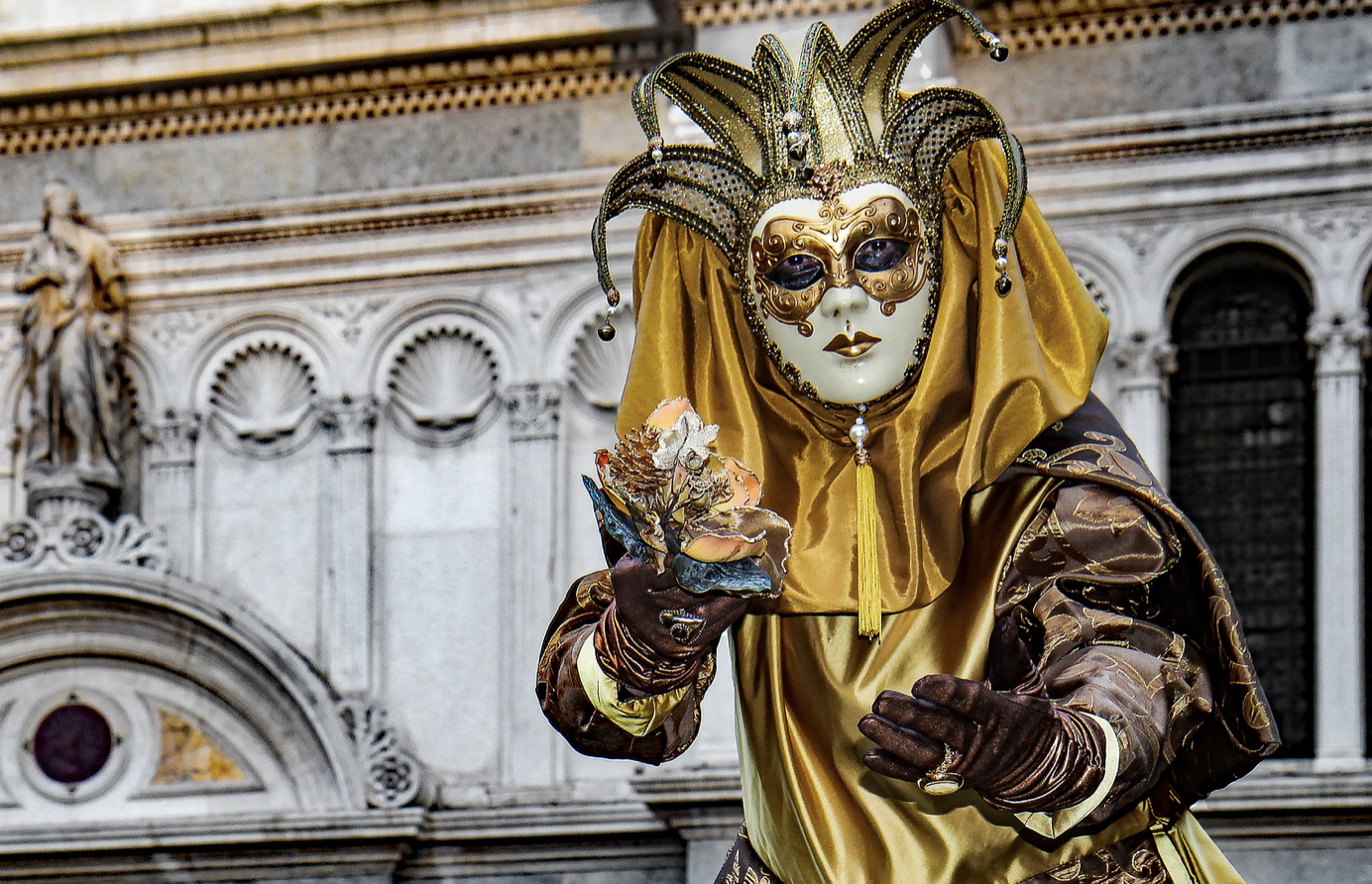 One of the common masks worn during the Carnival of Venice is the Jester mask (Photo by: Werner Boehm)

In many ways Mardi Gras mimics this Venetian festival, especially with its important tradition of wearing masks. Though Mardi Gras originated in New Orleans in March 1699, the city’s festivities and costumed balls initially remained an informal affair. It wasn’t until 1857 that formal parades, krewes, and floats were introduced to New Orleans by the Mistick Krewe of Comus. At these public gatherings and parades, masquerade masks allowed citizens to remain anonymous and blend in with figures of authority in the city, such as the clergy and nobility. In the mid-1800s, the wealthy upper class of New Orleans consisted of aristocratic millionaires that controlled the region’s sugar cane plantations. Approximately 450 million pounds of sugar cane were produced by Louisiana plantations per year during the 1850s. These powerful aristocrats profited off the labor of thousands of enslaved African Americans who transferred sugar and cotton on and off the port’s ships and worked the fields of plantations. Laura Plantation, a massive property in Louisiana spanning 12,000 acres, was a famous sugar farm where hundreds of enslaved African Americans would be born and die, or they would be acquired and sold. While the aristocrats took residency in townhouses of the French Quarter and mansions of the Garden District, the poor plantation workers of the lower class found themselves begging for food and resources. Mardi Gras enabled members of these social classes to mask themselves and come together singing, dancing, dressing up, and blending as one. The saying “to mask oneself” connotes transformation –– a new face and attire allows an individual to transcend everyday life, to escape the prosaic and immerse him –– or herself in the magic and power of Mardi Gras.

Masking one’s identity was especially prominent during the Jim Crow era in the United States. During the 19th century in New Orleans, there was segregation of Mardi Gras krewes that sought to reinforce the white supremacy, nobility, and discrimination of the racialized South. White citizens publicly opposed the postbellum Reconstruction era, protesting against rights extended to Blacks and enfranchised African American men. As a way of escaping exclusionary practices and segregation at parades, groups of African American men dressed up in Native American costumes, paying tribute to the Native Americans who protected and took in runaway slaves. Now referred to as Mardi Gras Indians, these men were able to conceal their identities by masking themselves, which allowed them to participate in the Crescent City’s festivities. According to Larry Bannock, past President of the New Orleans Mardi Gras Indian Council, “Mardi Gras Indians are secretive because only certain people participated in masking–people with questionable character. In the old day, the Indians were violent. Indians would meet on Mardi Gras; it was a day to settle scores.”

Just like in the Carnival of Venice, masquerade masks helped New Orleanians like the Mardi Gras Indians “live out fleshly desires with the hope that come Ash Wednesday, all will be forgiven and forgotten.” Wearing masks allowed male aristocratic krewe members to protect their reputations while maintaining an element of anonymity. Memberships of krewes were kept secret, as well as the identity of the krewes’ kings. Failure to wear a mask while riding on a float would even result in members of the krewe getting fired, especially from the famous Endymion and Zulu parades of the city.

Today, many of the Mardi Gras masquerade masks worn closely resemble those of the Carnival of Venice. One of the striking differences is that traditional Mardi Gras masks contain three colors: purple for justice, green for faith, and gold, which represents power. Though masks play an important role in the city’s festivities leading up to Ash Wednesday, mask use is actually regulated by Louisiana Law. It’s currently illegal to wear a masquerade mask in Louisiana, except during the Mardi Gras holiday. These masks continue to remain a crucial part of Mardi Gras, allowing festival goers to act like whomever they want for the few weeks a year that the celebration lasts. As Wendy Doniger describes in her work “Many Masks, Many Selves,”  people are often driven to self-impersonation due to pressure to conform to public expectations. According to Doniger, “We need our masks. If we always tried to be one single self, without our masks, the world would grind to a halt. With them, the world proceeds from self to self.”

“Italian Mardi Gras Face Masks: What They Are and What They Mean.” Explore Italian Culture, www.explore-italian-culture.com/mardi-gras-face-masks.html.

“Why Do People Wear Masks During Mardi Gras? Explore the Reasons.” Celebration Joy, 16