WCW: Dr. Samella Lewis giving back to the Black community

“Art is not a luxury as many people think – it is a necessity. It documents history – it helps educate people and stores knowledge for generations to come.” – Dr. Samella Lewis 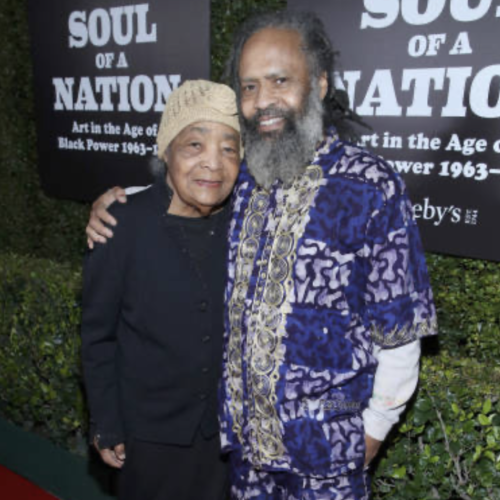 Claude Lewis joins Dr. Samella Lewis on March 22, 2019 at the opening of Soul Of A Nation: Art in the Age of Black Power 1963-1983 Art Exhibition (Photo by: Randy Shropshire/Getty Images for The Broad Museum) 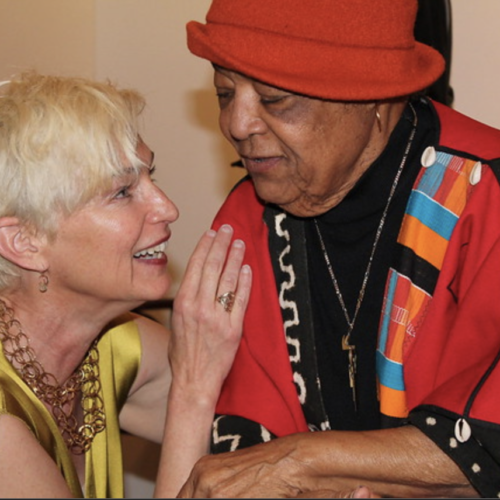 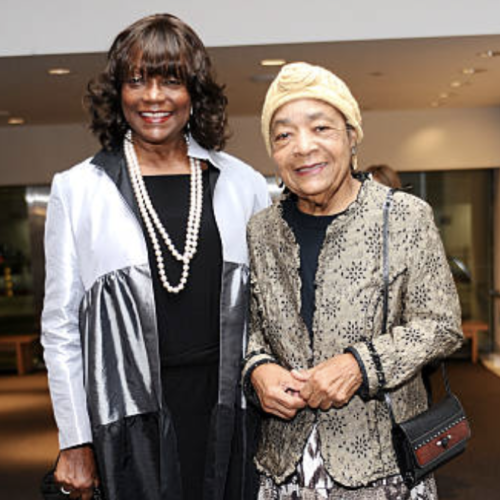 Tracy Johnson and Dr. Samella Lewis together at the Gala In The Garden at the Hammer Museum on September 24, 2011 (Photo by: Stefanie Keenan/WireImage)

In 1997, New Orleans native, artist, and art historian Dr. Samella Lewis created one of her most memorable and recognized paintings: Together We Stand. Delivering a powerful message about racism and feminism, this hand-embellished lithograph features the poetry of civil rights activist Maya Angelou. After a quick glance at this painting, there appears to be a small child being lifted by other African Americans, perhaps family. But like all forms of art, there is a unique underlying message that the artist hoped to convey to her audience. Together We Stand was one of the ways Dr. Lewis expressed her feelings about growing up in the Jim Crow South.

In this work of art, the adults surrounding the young girl are holding up a sign with Maya Angelou’s lyrics from her poem “Our Grandmother.” We see the words “However I am perceived and deceived, however my ignorance and conceits, lay aside your fears that I will be undone, for I shall not be moved.” Angelou’s poem is about a woman evading slavers and telling her children about injustices in life and about the worst that could happen to them. Dr. Lewis included these lines from the last stanza of Angelou’s poem, which highlights the theme of understanding and accepting oneself in order to achieve inner peace. This stanza depicts a woman singing for the world to hear that despite what everyone thinks about her, she will not let these microaggressions, stereotypes, and injustices break her. She shall not be moved or let this change who she wants to be. Dr. Lewis stated, “I fight against segregation, discrimination, racism, brutality and depravity because these things deny people their rights as human beings. I feel everyone should be liberated from excessive brutality and situations confining them to a discouraging and demeaning place in life.” Together We Stand, like many of Dr. Lewis’s other works, reflects her experiences growing up as a Black woman in a racially polarized society where Blacks were discriminated as the minority. Dr. Lewis “used art, action and advocacy as her ‘tools’ to inspire people to be inclusive.”

Born and raised in New Orleans, Louisiana, the Civil Rights Movement and Dr. Lewis’s heritage served as sources of inspiration and greatly influenced her motivations and artwork. From a young age, Dr. Lewis was exposed to the paintings of artists like Josephine Crawford and Charles Reinike in the French Quarter. As a way of coping with the harsh realities and stressors that she faced at home, Dr. Lewis turned to art and began creating her own pieces that embodied experiences from her life. She found inspiration in topics “as diverse as police brutality against African Americans, comic books, and charac­ters from her older sister’s romance novels.”

Dr. Lewis’s geographic origins inspired her to see art as a reflection of the struggles that African Americans, especially women, have endured. After creating numerous works of art, she began to shift her focus from her own artwork to creating a space where Black artists could be heard and showcased.  With hopes of creating new exhibition opportunities for these artists and helping them get a start on their careers, she helped found the Museum of African American Art in Los Angeles in 1976. When creating the museum, Dr. Lewis fought long and hard for the hiring of more African Americans during a time in United States history where only 9.9% of the country’s labor force was Black.

By showcasing the works of Black artists, Dr. Lewis was able to bring public awareness to African American art, culture, and achievements. In an interview with Baila EMS films Dr. Lewis said, “I thought it was necessary to at least start something so that people would have a place to exhibit their works and to house their works.”

When describing their encounters and experiences with Dr. Lewis, many colleagues have emphasized her determination and passion for helping others. She worked to counter the racial discrimination, brutality, and segregation of African Americans by advocating for Black artists during a time when they were a part of the underrepresented minority in the United States. According to Lowery Stokes Sims, the first African American curator at the Metropolitan Museum of Art  and president of the Studio Museum in Harlem, “There was a joke for a long time that if you went into a museum, you’d think America had only two black artists — Jacob Lawrence and Romare Bearden — and even then, you wouldn’t see very much.” Through founding the Museum of African American Art, Dr. Lewis worked to not only build a community but to change the landscape of art history. Longtime friend of Dr. Lewis and art dealer, Eugene Foney, spoke about how “her dedication to the culture is most striking, as she created materials about African American artists at a time when there weren’t a lot of materials that showcased these artists.”

When describing the motivations behind her artwork, Dr. Lewis has expressed how she never starts her works with sketches, but instead draws whatever comes to mind. “I put something on the canvas, and I move from that. I don’t pre-judge or pre-do anything.”

Dr. Lewis’s paintings and works of art, such as Together We Stand, have been featured and can be found in museums and African American exhibitions across the country. She continues to be described as an influential art figure who is “a sweet example of what is possible through hard work, confidence in your abilities, and belief in a cause that is greater than yourself.”

“Black women are nurturers. We nurture our families by seriously listening to and seriously considering what they tell us. We also have an obligation to see that valuing and collecting contemporary art is a significant aspect of nurturing. We must familiarize ourselves with our historical and contemporary art in order to understand and know ourselves.” – Dr. Samella Lewis

“About MAAA.” THE MUSEUM OF AFRICAN AMERICAN ART, https://maaala.org/about.html.

Manuel, Faron. “Our Image Is Our Message: As Told by Black Women Artists.” BLACK ART IN AMERICA™, www.blackartinamerica.com/index.php/2019/09/23/our-image-is-our-message-as-told-by-black-women-artists-by-faron-manuel/.