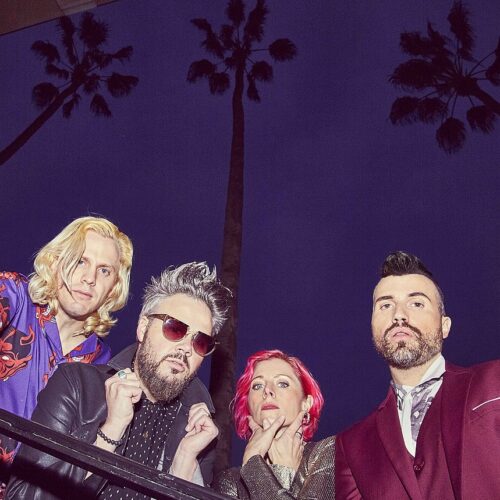 After a long, six-year hiatus, Neon Trees released their fourth studio album I Can Feel You Forgetting Me. Since their first album dropped in 2010, the band had churned out a new album every two years. However, this band of Mormons was shaken up in 2014 by the coming out of their front man, Tyler Glenn, as gay. The band split as Glenn grew apart from them, needing to figure out for himself what his new and open identity would mean for him. As a Mormon, homosexuality was frowned upon and shunned as taboo. The internal conflict of his opposing faith and sexual identity took a toll on Glenn’s writing ability and mental health, and so spent his time working on creative projects in the years after he split from the band. In that time, he released a solo album about his internal conflict and, for the first time, was able to express his homosexual feelings in song. After his album, Glenn met a man and entered a relationship that would prove to be toxic and abusive. The mental toll weighed him down but he managed to muster enough strength the get up and leave. He then spent six months starring in a New York production of Kinky Boots where he connected with his gay identity and restored his passion for singing and music. Having spent time on his own to discover the hidden side of himself, Glenn reunited with the members of Neon Trees and they began the process of healing together. With more angst, rage, and pain than ever before, Neon Trees was ready to produce their most raw and honest album to date.

Neon Trees is a pop rock band and their signature sound comes up-beat, face-paced rhythms that lift up the listener while Glenn’s voice takes them away. His raw, bright vocals feel somewhat pushed to their limits while also giving the impression that his pitch and mood are exactly where they need to be. In I Can Feel You Forgetting Me, Neon Trees loosens up on their pop vibes as the album takes a more serious tone. The songs evoke catharsis rather than fun and adventure. Right of the bat the album starts with “Nights,” a song about gay love and, more specifically, the toxic relationship Glenn left in New York. When Glenn sings “Cause all these tears and songs about you won’t bring back the best days of our lives // I can get by the days just fine, but the nights,” the band’s upbeat jams do nothing to hide the dread and longing in his voice. Many of the songs in the album are about this same relationship. In “Skeleton Boy,” Glenn clearly sings as if a piece of him is missing, “I’m a skeleton boy strip me down to the bone and then leave me alone // now I’m a skeleton boy, a relic from a former love,” but in his tone he sounds happy that he has experienced being gay, with all the good and the bad that came with it.

While Glenn explored his same-sex desires during his time apart from Neon Trees, this freedom was granted to him through his career. As a talented singer, he garnered reputation and money that led him to travel and perform without being tied down to his band. According to John D’Emilio, gay men have more time to explore a personal life detached from their livelihood because of the economic freedom men in general received since the industrial revolution. Without being tied down to a family and having the wherewithal to experience a richer personal life, men with same-sex desires were able to explore not only themselves, but their relationships to other men within the community. The creation of the gay identity, therefore, rose with the development of capitalism. Further disrupting traditional life and the nuclear family, World War II sparked the creation of larger queer communities. The war had broken men and women alike free from the constraints of heteronormativity and granted them freedom to travel and meet other queer people. Hubs of gay culture and community cropped up as queer people congregated to meet people like themselves (D’Emilio). New York was a major front-line for the coalescing of the gay identity as a port city that received many soldiers and sailors as well as curious and eager civilians. Glenn himself went through a similar transformation as he traveled to New York to immerse himself in gay culture. He met and connected with many gay people and his fame got him a role in the queer-cult-classic Kinky Boots.

For many gay men, like Glenn, a career also has the potential to hinder one’s personal growth. While inside his personal sphere of Mormon friends and relatives, including his band, he was scared to explore his identity. His fears stem from the societal stigma surrounding being queer. Not only did Glenn have to hide himself from those close to him, but he also had no idea how his fans would react if they knew the truth. So, with his band and fan’s unknown reactions, Glenn had to choose between his career and coming out. In the end, the stress became too much and Glenn knew that he had to get out to get into his own head. In 2014, he came out and left the band. Two years later, he continued to leave the Church of Ladder-Day Saints, creating an even bigger rift in the band. His album from this time, Excommunication, is starkly different to the new album as Glenn sings about leaving the Church of Ladder-Day Saints. When he sings “I think I lost myself in your new religion // You say a prayer for me like a superstition,” Glenn shares the repressive nature of his upbringing and he declares that he is finally choosing himself. After finding acceptance from within, Glenn was able to return to his band with open arms as their long-lasting friendship could not break. Even more surprisingly to him, he was also welcomed, partially, by the Mormon community. Now equipped with a newfound strength, Glenn wants to spread awareness for those who come from a similar place as him. For kids who fear religious or social prosecution, he wants to be seen as a guiding beacon to show them that it is okay to be yourself.

In the past, Glenn would carefully construct his lyrics to speak his truth but to also hide his true identity from his band mates. It is no surprise, then, that the newest album feels somehow more real. I have always connected with Neon Trees’ music, but it felt like I was watching from the other side of a screen. I felt ravenous, hungry for more, to belt out the lyrics, or to just go crazy. Perhaps I could feel the repressed homosexuality waiting to burst from the lyrics. Interestingly enough, I also came out in 2014, without knowing that one of my favorite singers had as well. Looking back, seeing my growth alongside his makes me happy and maybe a little bit remorseful. When my favorite album of all time, Pop Psychology, came out it was a kind of wake up call. Just like Glenn, I had had enough hiding and just wanted to be free. Listening to I Can Feel You Forgetting Me felt like I was finally on the right side of that screen, as if a veil had been lifted and I could finally see into the world of Tyler Glenn. More than that, I felt satisfied, no longer needing to be let out or let loose, I felt embodied and whole.