A review of Troye Sivan’s album, In a Dream 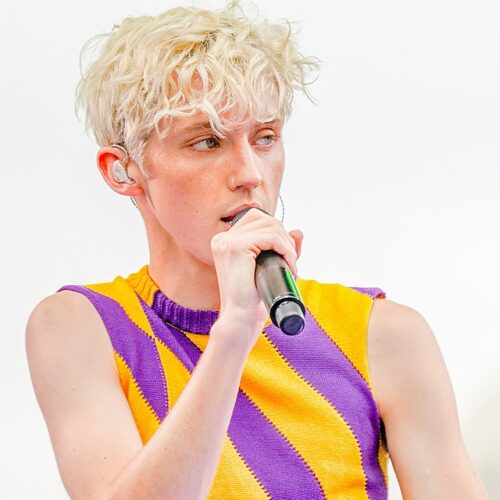 The COVID pandemic has taken valuable time and opportunities away from everyone, but Troye Sivan has created the perfect lamentation album. In August of 2020 Sivan collaborated with some drunk synthesizers to create the ultimate melancholy yet techno pandemic anthem album: In a Dream. He vents about quarantine frustrations along with the breakup with his ex-boyfriend- both very relatable concepts for many people.

The album opens with “Take Yourself Home,”a reminder of the isolation everyone was put in at the beginning of the pandemic. The first line, “I’m tired of the city, scream if you’re with me,” is the epitome of how I personally felt during quarantine. Travel was restricted for everyone for most people so we were all stuck in one city. Many people wanted to leave and go on adventures this summer, but it was simply not an option due to safety. After staying in one place for a long time, not doing anything, you become slightly insane. Sivan goes on to sing, “If I’m gonna die, let’s die somewhere pretty,” a chilling line to sing in the middle of a pandemic when thousands of people are dying. The comical thing is that the song isn’t about the pandemic at all! Sivan’s lyrics are about finding your place in the world but the song was released in a time when everyone had to stay in place. The lyrics are paired with soft beats and an acoustic guitar that makes the song feel very “chill”. The steady pitter-patter of the beat is relaxing yet brings some energy so the song isn’t flat. The guitar strings dance around the synthesizer beats and show off when the beats pause to rest.

Sivan is a proud member of the LGBTQ+ community, and he shows that he doesn’t care about homophobic judgement in the song, “STUD.”He even makes sure to go into detail about the kind of guy he goes for when out on the town. Sivan sensually sings, “Hey tough, what’s it like to be so big and strong and buff.”  “STUD”switches back and forth from Sivan sexualizing muscular men and Sivan expressing his desire to have that body himself.  His voice stretches out like soft taffy being pulled, creating a sensual yet apprehensive tone. More insecure lyrics arise that expose how scared Sivan is to not be enough. He sings, “Could I still be a hunk to you?” and “Just let me believe that you like what you’re seein’.” Sivan wants to have a good time with this guy but his insecurities are pulling him down. However, if he can’t be super buff then he may as well hook up with someone who’s super buff. Right? Sivan is unsure. He sings, “We’re into this. Right? We should do this. Right?” He uses different tones of voice creating an image of the devil and angel on your shoulders disagreeing. The quietness of this section reveals he may not want to know the answer to his own questions. All of the tension is released once the dance section comes in, and the song feels carefree yet again.

Despite many fans deeming him a “gay icon,” Sivan feels quite uncomfortable about the term and discourages its use. He expressed that he felt scared because he doesn’t think that he can represent the entire community.  In an interview with Another Man, Sivan explains saying, “I’m one voice of so many that are missing, and so I’m just trying to tell my story.”  He thinks the spotlight should shine on those LGBTQ+ members that have been less privileged than he. Sivan believes a gay icon should be someone who hasn’t had any advantages to work with. He furthers this by saying, “I just don’t represent everybody, because I’m extraordinarily lucky. I come from a middle-class white family in Australia, and all of my dreams have come true by 22.” Although he rejects the term “gay icon,” Sivan’s fans look up to him as an LGBTQ+ member and ally.

If most of songs from In a Dream were in a movie, they definitely wouldn’t be at the climax. These are the kind of songs that would play during a slow montage or while the credits roll – more like ambience and “vibey” music. Besides the title song, the In a Dreamalbum could be considered melancholy music, an idea created by scholar Robin James. A melancholy song is one that “rises and falls like a wave on the open sea, a wave that never gets to build and crest.” Sivan’s songs in this album have their peaks and valleys but there’s no big crescendo or satisfying release. In “10/10”there’s a chorus but the music doesn’t build towards it. The instrumentation sort of rolls over the chorus like a wave over a rock. You can also hear the melancholy tone of voice, especially when Sivan hums in between verses. The deep hums wander around sadly like a single, lonely leaf drifting to and fro in the wind.  Similar to James’s analysis of melancholy chords, “10/10”loops the same few chords. This makes the song feel circular, like it could just keep going on forever because there’s no destination.

The title song, “In a Dream”, plays with the struggle between emotional damage and resilience. The lyrics give off an air of frantic desperation with Sivan saying short lines like, “I think about it. Can’t think about it.”  After the breakup with his ex-boyfriend, Sivan is desperate to get him off his mind. He is hurt by what happened and wants to build resilience, but can’t seem to stop thinking about his ex-boyfriend. He sings about how he even smashed his phone to get himself to stop stalking his ex. However, Sivan pulls himself up by his bootstraps just in time for the pre-chorus. He slams down his foot saying, “ I won’t let you in again. I’m gonna lock the doors and hide my shit.” The beat becomes syncopated and strong almost like a march, reinforcing this idea of a battle cry.  Right before the chorus there’s a dramatic pause that further builds this rising tension.  The chorus immediately bursts into a pattern of common pop chorus chords: D minor, G, C, and A minor. The lyrics turn almost comical as we learn Sivan’s ex is even showing up in his dreams. Sivan sarcastically sings, “Guess I might understand it, if you don’t listen to me. But I thought it was obvious you don’t show up in a dream.”  Sivan jokes as though his ex is so drawn to him that his ex visits his dreams, when actually Sivan misses his ex like crazy. How many of us have pretended our exes secretly miss us? Yeah, I thought so. These lyrics push and pull with Sivan’s flowing emotions, allowing us to witness his effort towards resilience. Sivan is letting us know that it’s okay to be damaged and that resilience doesn’t need to be practiced immediately.

In a Dream is far more adventurous than Sivan’s previous album, Bloom. Bloom is your typical pop album with the main purpose being to appeal to mass audiences. This album is sprinkled with common chord progressions and typical dancing beats. Sivan surprises us with In a Dream by diving into his indie side and allowing himself to be “boring”. But alas, nothing about this album is boring.