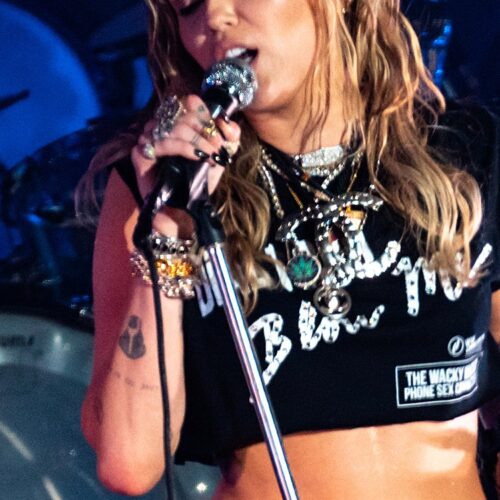 Last week, Miley Cyrus penned a letter to Hannah Montana on the 15th anniversary of what may be considered the beginning of her life as a pop star and celebrity icon. Hannah Montana was Cyrus’s “alter ego” and the main character of the beloved Disney Channel series “Hannah Montana,” that Cyrus credits being the “rocket that flew me to the moon + never brought me back down.” In conjunction with Cyrus being raised in the face of music and having the support and resources available to her to make a music career, the show has brought her to where she is today. This letter comes four months after Cyrus’s latest album release Plastic Hearts. Most 20-somethings, myself included, have been Miley Cyrus fans since her Hannah Montana days and have watched her growth and transformation as a person, artist, and performer, both during live concerts and virtually listening thoroughly to all of her albums.

Plastic Hearts is a pop-rock, with even a few hints of country album that showcases Cyrus’s raspy voice and grows far beyond her full-blown pop past. Cyrus also pays homage to some of her favorite classic rock stars with multiple covers, including Blondie’s “Heart of Glass” and guest artists Stevie Nicks and Joan Jett & The Blackhearts. Album opener “WTF Do I Know” gives the listener a glimpse into the new pop-rock Miley and leaves them wondering what the rest of the album will bring with the heavy, electronic guitar intro and the unforgettable first line of “I’m not tryna have another conversation, probably won’t want to play me on your station.” This almost seems like a direct response to Cyrus’s Bangerz opener “Adore You,” with the opening line “Baby are you listening.” Lyrics like these allow Cyrus to continue to grow with her fan base, like me, who are now older and drawn back into her music through her narrative that certain life events have dictated.

Cyrus has always used storytelling to connect with her fans. She has presented real and raw stories of love, heartbreak, loneliness, and confusion from an early age. I even experienced this side of Cyrus first hand when she stopped in Boston on her 2014 Bangerz tour. Cyrus’s beloved dog, Floyd, suddenly passed away, and she was absolutely devasted but got on stage, paying tribute to Floyd and not afraid to share her feelings with fans. Moments like these humanize celebrities that sometimes seem to be living in an alternate universe to some of us. Cyrus refers to a new life and freedom throughout the album, following her divorce and breaking boundaries within Hollywood. Cyrus writes to Hannah in her letter, “Although you are considered to be an ‘alter ego,’ in reality there was a time in my life when you held more of my identity in your glovette than I did in my bare hands.” Cyrus has never hidden behind her struggles and shares the ups and downs of all human experiences. Specifically, in “Golden G String,” Cyrus discusses the complexity of sexuality and being a female in Hollywood and the pressure to conform that has always surrounded her. One chorus strikes a particular chord with myself, and I’m sure many other 20-somethings when Cyrus sings, “Oh, that’s just the world that we’re living’ in/The old boys hold all the cards and they ain’t playin’ gin.” We live in a world where being anything other than a powerful white heterosexual male leaves us hanging on by a thread.

Cyrus’s narrative sounds eerily familiar to the discussion in Robin James’s Resilience & Melancholy: Pop Music, Feminism, Neoliberalism, about the pressure and judgment Rihanna has faced in Hollywood. Upon releasing Unapologetic, Rihanna was scrutinized for her lack of resilience. Fans and those alike expected Rihanna to pick herself up and dust herself off following her abusive relationship with Chris Brown. However, she chose to take a different path that surprised the world. Our society and Hollywood specialize in resilience discourse and have failed to create a space where women, specifically black and minority women, have a place when they struggle to overcome trauma. The neoliberal agenda is to capitalize on suffering rather than take a deep dive into the more significant issue. While it is clear that both Cyrus and Rihanna are put under the world’s microscope, Cyrus has often come out with less damaging labels. Yet, she does not fail to refer to Hollywood as “The Sunny place for shady people” in track 2 of her latest album, also titled “Plastic Hearts.” These lyrics show the pressure cooker side of Hollywood that the glitz and glam tend to overshadow sometimes.

Cyrus’s whiteness, her family, and background of certain business relationships have allowed more freedom in the choices she had made representing herself. Cyrus has faced similar criticism to Rihanna and backlash as she has changed from her Hannah Montana good girl days dating Nick Jonas to a raspy-voiced rock star with more androgynous looks and synth sounds sharing musical stories for all audiences to follow. She reflects on the criticism she faced in this shift in her album with powerful lyrics like, “There are layers to this body, primal sex and primal shame/They told me I should cover it, so I went the other way.” Cyrus blatantly ignores norms, and it’s her white privilege that enables her to move across these lines without the same judgment Rihanna has faced.

Not only does Cyrus have the entire Disney corporation to thank for skyrocketing her to fame, but she also has her family. Daughter of famous country singer Billy Ray Cyrus, and Goddaughter of what some may consider the Queen of Country Music, Dolly Parton. The privilege her family raised her in allowed her to audition for and be on the Disney Channel throughout her childhood. Cyrus had the platform and resources, all in addition to her whiteness, to live freely in Hollywood and produce music of almost every genre, all while openly exploring her sexuality. While many question what direction Cyrus may be heading in next, there is never the question of, is she giving up? How could she fail to overcome this? Instead, Cyrus gets the chance to duet with Stevie Nicks and stroll freely into the world of rock n roll because, as Cyrus admits in “Hate Me,” saying “Go ahead, you can say that I’ve Changed/just say it to my face” she is no longer the good girl Disney pop star she once was.

Plastic Hearts represents a shift for Miley Cyrus. While it is critical to acknowledge Cyrus’s privilege of releasing and making music the way she has, there will always be true, raw talent at the core. She is unapologetic, bold, and vocally unforgiving across all genres she dips her toes in. In “Angels Like You,” Miley says it best herself, “I’m everything they said I would be.” The year 2020 was one most wish to forget, but it will undoubtedly live rent-free in our heads, and Cyrus shares the rainbow of emotions that we all felt. While Cyrus’s lyrics tell her own story, they also become each listener’s personal story leaving us to wonder, what will album eight bring?