Everything Will Change: The Postal Service album review 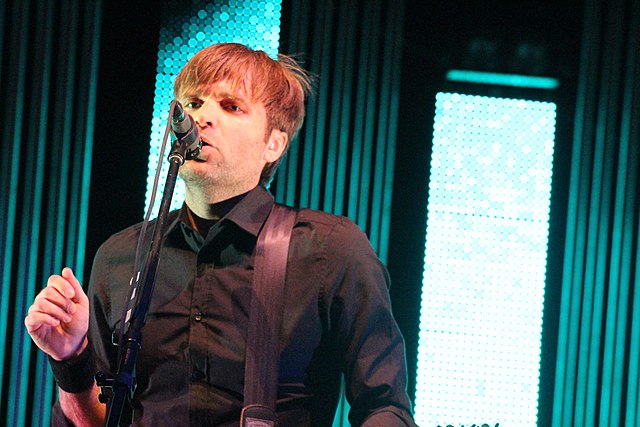 Ben Gibbard of The Postal Service performing at Red Rocks Amphitheatre in 2013. Photo by Wikipedia.

By now, it’s pretty fair to assume that most fans of 2000s indie music have at least a passing familiarity with the Postal Service’s “Such Great Heights.” The early-to-mid-2000s indie-electronic duo the Postal Service has been the soundtrack to many a young romance – I mean, can it get more romantic than “I am thinking it’s a sign / That the freckles in our eyes are mirror images / And when we kiss, they’re perfectly aligned”?

The band’s one and only album, Give Up, was released in 2003. To date, it is one of the record label Sub Pop’s most successful releases. The side project of Death Cab for Cutie singer Ben Gibbard and electronic music producer Jimmy Tamborello, the Postal Service’s singular album has had massive influences on indie and alternative music. Many indie-electronic acts can be traced back to the groundbreaking sounds of Give Up.

Seventeen years later, the Postal Service is back – sort of. On December 4, 2020, the band released a live album with audio taken from a 2014 concert film. Everything Will Change is the Postal Service at its best – playing a reunion tour celebrating the ten-year anniversary of Give Up. The album feels like a time capsule. Carefully chosen snippets of Gibbard talking to the audience and the audience screaming back showcase the live aspect of the album without overwhelming the music. It’s a time capsule from 2003, yes, but also from a time when we could have concerts in person and gather together to scream the lyrics along with the singer and feel the bass thumping in our chests. It’s beautifully nostalgic. A full year into the pandemic, the Postal Service reminds us of better days – that they once existed and will exist again.

The production and creation of the album itself has become a part of its appeal. Any committed fan would be able to tell you that Gibbard and Tamborello shipped physical recordings up and down to the West Coast to one another – they were never in the same place as they created the album. And thus, the name of the band: the Postal Service. Hardcore fans will also be able to tell you that Give Up is not the duo’s first collaboration. Gibbard was featured on one song on Tamborello’s 2001 album Life is Full of Possibilities and their collaboration, a song titled “(This is) The Dream of Evan and Chan” was by far the most popular song on the album. After the massive success of their first song together, the Postal Service became an inevitability.

Gibbard’s vocals are instantly recognizable to anyone who has ever listened to Death Cab for Cutie. His singing can best be described as smooth or rich; I’ve fallen asleep before to his melodic, somewhat mournful, and soothing voice. He reaches the low end of his impressive range on “This Place is a Prison” while songs like “Our Secret” showcase the lighter, higher end. On “Recycled Air,” his repetition of “Ba ba ba ba” is almost reminiscent of a bell.

Tamborello’s lush electronic backing dances underneath the vocals. Futuristic tones are omnipresent; the synthesizer and electronic sounds tie the album together into a cohesive whole. Tamborello’s masterful electronic musicianship is a gorgeous accompaniment to Gibbard’s lyricism. He does a brilliant job at layering in different sounds and beats. From the bubbling and hissing sounds in “Clark Gable” to the driving percussive beat of “Such Great Heights,” and the squeaking at the beginning of “Natural Anthem,” the album is full of different – but complementary – futuristic sounds.

The album resonates, both literally and figuratively. The echoes and repetitions of the synthesizers, the moment of silence at the end of a song as the last note of “Brand New Colony” hangs in the air, the vibrations created by every movement and sound – all physical resonances. The album resonates emotionally, though, too, even after all this time.

Much of the album’s subject matter was politically relevant in 2003 and still feels eerily current. “We Will Become Silhouettes” is about life after a nuclear apocalypse. While some of the lines are specific to nuclear war, other lines about apocalypse prepping feel a little too familiar – “I’ve got a cupboard with cans of food / Filtered water and pictures of you / And I’m not coming out until this is all over” – I’m willing to bet this song made an appearance on more than a few pandemic playlists. Other songs reference other anxieties that still plague us, like climate change. In “Sleeping In,” Gibbard sings of “concerns about the world getting warmer.” Eighteen years later, those specific political anxieties are all too present. When it comes to climate change and the threat of nuclear war, the Bush administration and the Trump administration don’t seem so different. In this way, the album exists almost outside of time. The electronic sounds, produced by instruments that don’t exist outside of a laptop, are relics of a time that has not yet come.

Every song on the album, regardless of the subject matter – ranging from nuclear war to breakups and JFK’s assassination – is at least a little bit melancholy. Some of it is likely Gibbard’s voice – Death Cab for Cutie isn’t known for their dancefloor anthems. Although the percussive, electronic backing is often danceable, the songs themselves are rarely (if ever) completely happy. Even the most romantic love song on the album, “Such Great Heights,” is written for a lover far away, one whom the singer misses terribly. “Turn Around” is probably the most danceable song on the album and definitely the most hopeful – “You gotta know this will turn around / Until then I will not let you down” – but nonetheless, it’s written for a listener going through a rough patch (“Sick days / drunk nights / Short fuse, loud fights / Lose weight: all bones”). Even in the hopeful songs, there is melancholy – but even in melancholy, there is hope and connection.

Everything Will Change is timeless and somehow very much a product of its time. In a way, it’s an archive of 2003 – and 2013, when the album was re-recorded, and 2014, when this concert in Berkeley was filmed, and 2020 when the live album was released, and even now, as we listen to it, alone in our own homes. Every listen is a little bit different, holding a new set of memories and experiences and ways of relating to the music. This melancholy compilation of feelings is maybe what gives the album so much staying power. The ever-present political and personal anxieties give every generation of listeners something to latch on to.

It has the potential to create community, too – critical theorist Ann Cvetkovich posits that political depression offers new modes of sociality and attachment (6). In refusing to remain hopeful in the face of incoming disaster and owning the fact that everything is at least a little bit fucked, we can commiserate and share our collective anxieties and sadness. Singing together is a sacred form of connection, one that Gibbard is intentional in fostering. At the beginning of “Nothing Better,” he asks the crowd, “Who here has had their heart taken out of their chest and stomped on? This guy right here? You right there? Alright, well this song is for you.” We are invited to sing together, share our heartbreak. The political anxieties and general melancholy of the music, combined with the unique connection provided through singing together, create a beautiful and unique mode of relationality. Maybe that’s what we’re looking for, listening to the live album, listening to thousands of people sing along to Ben Gibbard looking for a surgeon to “crack [his] ribs and repair this broken heart.” Spilling personal and political fears and heartaches into the air together to the tune of songs that we’ve been listening to for almost two decades, the live album is heavy with feelings. It’s an archive of the history of indie rock and synth pop and an archive of the listeners’ experiences over the years.

The live album ends with a version of “Brand New Colony,” the song from which the album gets its name. The audience can be heard singing along to the deeply pared-down version. Over the last minute and a half, the band teases the end, repeating the final line “Everything will change” four separate times. The album ends with the joyful and grateful cheers of the audience. During the last four minutes of the album, only one line is sung: “Everything will change.” I’m not sure whether that’s a prophecy, a wish, or a curse. Maybe it’s up to us.