Ode to Joy: A portrait of musician Joy Clark

Not published for featured voice because no featured image and no excerpt provided. Featured image put in by editor and put in archive. Also, author does not have picture byline. 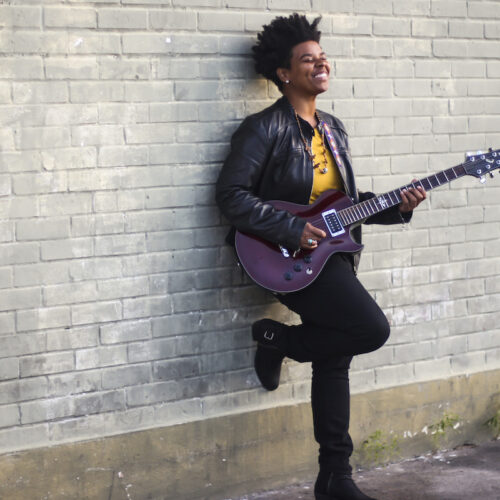 Joy Clark and her guitar.

The City of New Orleans is notorious for its rich music, with deep notes of jazz and soul ringing on each street corner. One may think young artists in New Orleans begin their careers inspired by the City’s infatuation with music, yet for many Black artists, their melodic careers often begin within the Black Christian Church. Joy Clark is a perfect example of how musical inspiration can grow and flourish from within such churches. Hailing from the Westbank, Clark grew up in the church; her parents were pastors and her family devoted time to attending services and preaching the gospel. Clark describes her family’s devotion as she recounts that her family would drive over an hour multiple times a week to attend services. In her adolescence, Clark was deeply devoted to religion as she attended youth campus and crusades. In one of Clark’s earliest memories, around the age of four, she remembers hearing a member of the church playing guitar and thinking to herself “I don’t know what sexy is, but that’s probably sexy.”

From that point forward, Clark fostered her love for music by singing in church and even beginning to learn the guitar. Clark wrote gospel songs and performed them in front of the other members of the church. However, while her love for music sparked from the church, the secular environment hindered and limited her musical capacity. Her parents did not allow her to listen to nonsecular music; she was required to “sneak” such genres of music through her basketball team as members had recordings of nonsecular music (namely of the band Boyz II Men) that she enjoyed. Particularly, Clark was deeply influenced by Tracy Chapman, who exposed Clark to an entirely new set of values and musical expression. After listening to her music, Clark was at a crossroads with her religious upbringing as Chapman’s music made the young artist question if her family’s religion aligned with her identity and aspirations. As a queer person, Clark’s relationship with the church further collapsed. Clark knew that the church had deeply imbedded homophobic tendencies, which were confirmed once she came out to her parents and was as a result no longer allowed to preform at her church. At the present, Clark does not identify as being religious; however she continues to appreciate her upbringing which initially exposed her to the world of music. While she does not not express any disdain about her religious upbringing, she uses her experience and channels messages of self-love and acceptance through her music.

These messages of self love and acceptance shine through when listening to Joy Clark’s “Here.” One can almost picture themselves in peaceful contemplation, strolling through the streets of New Orleans on a sunny afternoon to the upbeat, yet grounding melody. The lyrics to “Here” reflect upon moments of complete presentness; Clark describes being surrounded by beautiful sounds and nature, able to calm any thoughts of anxiety and insecurity. “Here” arguably best represents the core message of Clark’s artistry, one distinct to New Orleans. Clark’s lyrics acknowledge daily struggles, while presenting it poetically and with something to groove to. Clark, who often writes music before lyrics, clearly connects an interesting relationship between sound and meaning. In “Never Change,” the opening guitar chords already signify what will be a gentle, slow yet positive reflection. Clark’s work feels deeply personal, while employing universal and accessible lyrics, simply posing to someone, or something, “I hope you never change.” It is not difficult to picture Clark writing these songs in solace, often late at night unafraid to navigate themes of doubt and discomfort. There is a distinct vulnerability in her writing, where Clark bares all of her past experiences of anxiety and even awkwardness. In “Love  Yourself,” Clark isn’t afraid to admit that the road to self love was filled with questions such as “Who am I supposed to be?” She is able to fill every line with personal anecdotes of a journey to feeling comfortable. It is clear that Clark is an artist who understands that identity, sound, and word are inextricably linked; she is determined to tell her audience exactly who she is as an individual. In the video for  “Love Yourself,” the visual narration acts as a love letter dedicated to her younger self through themes of total acceptance.

“Love Yourself” is attributed to her adolescent self. Her lyrics “I always wondered who I was supposed to be/ I had to learn to love myself/ You gotta learn to love yourself” represent the sensitivity of exploring one’s identity in unison with achieving love. Such themes of personal love and acceptance emerged from Clark’s lived experiences. For example, Clark describes how placement in time is significant in creating meaning of her music through the motifs of self-affirmation, sensitivity, love, and optimism. As described previously, the challenge she faced in opening up about her sexuality was one that inflicted her with pain, but also a sense of relief and optimism in her journey of self-acceptance. She described how being open with her family allowed her to acknowledge her insecurities and embrace the person she’d been hiding. In her song “Here,” she places the audience inside of her head and reveals the anxieties and fears that she dwells upon but transitions those feelings into positive ones. By offering an optimistic outcome of the negative thoughts that travel through her mind, she empowers notions of self-affirmation. Clark’s personal growth into her sexuality and identity serve as a foundation to the motifs that she embraces in her work.

Through her lyrics as well as videos, Joy Clark offers up a raw and authentic version of New Orleans. If you talk to Clark, you are aware of her appreciation for the city and what it has provided her as an artist. She also gives the viewer a personal look at New Orleans and live music in the city. What Clark portrays in the sounds and lyrics of her music ties into Francesca Royster’s idea of the eccentric; someone who uses an aesthetic that is queer, black, and fluid in their gender identity. Clark embodies the way in which Royster describes Prince as “the consummate eccentric: creative, elusive, rocking racial, gender, and sexual lines’” (Royster 2).  Through her music, Clark shows her appreciation for what New Orleans has given her, both positive and negative. Clark embodies the eccentricity of the city she lives in though her challenging of norms in music as well as sexuality. New Orleans is one of the most eclectic yet graceful cities in the United States. This city has the ability to turn lemons into lemonade and lost souls into ones who have been saved by the spirit of the city. During COVID-19, Clark has been better off than most. From releasing a single to starting her own line of merchandise, Clark is the epitome of resilience and strength that is in itself New Orleans. These positives did not come without the expected struggles. Clark said one of the most difficult things for her was not being able to perform at JazzFest and New Orleans Fest, which are two pillars of the music scene in the city. She also notes that the lack of immediate feedback from a live audience has been a hardship on her creative abilities. Nevertheless, Clark says she has grown in ways she never thought possible during these unprecedented times. Clark has been continuing to perform music by being adaptable, for example playing at small private events. Her flexibility pays onus to the adaptability of the city’s entertainment industry. Joy Clark is a shining example of an artist who never takes no for an answer and is proud to be born and raised in the city of New Orleans.