The social and political commentary of artist profiles: Joy Clark 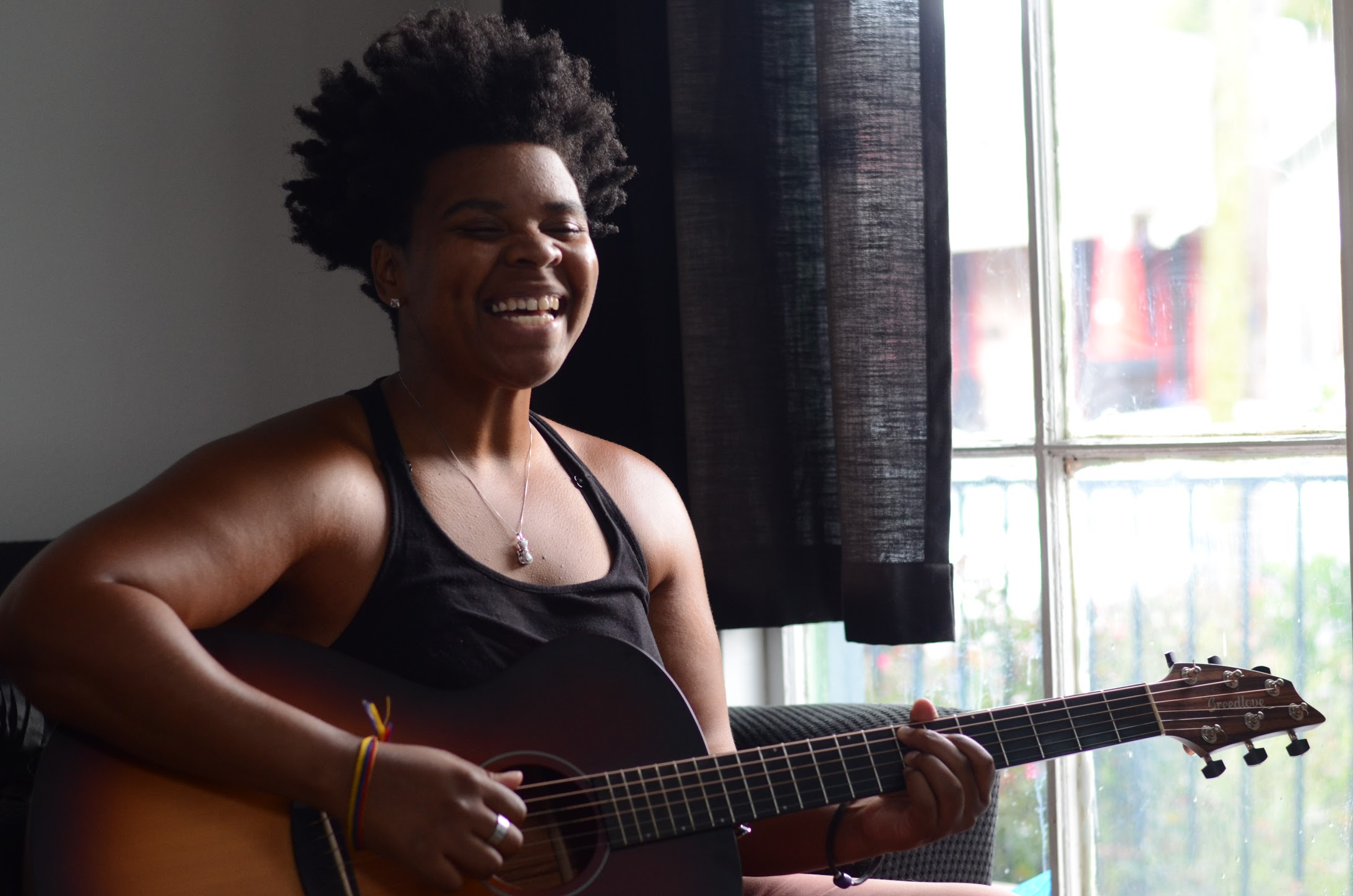 Joy Clark grew up surrounded by music. She was born and raised in Harvey, on the West Bank of New Orleans. Clark was engulfed by the (Black) musical traditions of the city from birth and now embraces them in her own songwriting. She mentions a “bluesy bayou vibe,” acknowledging Louisiana’s influence in her music when describing her style. A historically musical city, New Orleans offers a unique opportunity for artists; Clark was slated to participate in one of the city’s largest festivals – musical festival JazzFest. While the Covid-19 pandemic canceled it, Clark’s excitement about playing at JazzFest demonstrates her genuine love of the city (and the city’s love of music).

In addition to the influence of New Orleans on Clark’s musical identity, as the daughter of a minister, worship music notably played a large role in everyday life for Clark. She played music in the church from a young age; her first memory of singing was in church with her father at around age 11. Her Christian roots are also apparent as choir and gospel have clearly shaped the way she sings. Beyond that, she has learned tolerance and acceptance through religion that influences her lyrics about self-love and self-reflection. While worship music and hymns were always a part of her life, growing up homeschooled and relatively sheltered, she was not allowed to engage with secular music or popular culture until she was old enough to start making her own decisions.

Although the music she grew up listening to was in a context that condemned queerness, music also allowed Clark an outlet and opportunity to explore and process her own queerness. Reconciling her queer identity with her conservative upbringing was a challenge for Clark, but music was always a refuge, and her songs now provide a similar refuge for others. For example her song “Here” offers a description of a sanctuary and “Never Change” is a loving reminder of the listener’s unbrokenness and the singer’s support. She might be singing to herself, a lover or friend, or even her younger self as she does in “Love Yourself,” a love song to her 12-year-old self. Nevertheless, Clark’s lyrical vulnerability creates safe spaces for the listener, free of judgment. Her music is not explicitly religious, but Clark’s songwriting recognizes nature’s divinity and the sacredness of ourselves and connections with others. As no stranger to judgment and rejection, Clark’s open queerness and affirming lyrics provide a soft place to land for listeners.

Listeners are also captivated by the simultaneously airy and worldly quality of Clark’s voice that draws you into her music. Her softer tones lull you in, and then she shifts into a note that lingers in your mind, drawing you back in over and over again. In addition to her own music, Clark often covers and produces songs on YouTube showing the clear influence Stevie Nicks, Anita Baker, and Tracie Chapman have had on her music and the way she sings.

In her music video for “Love Yourself,” Clark uses the imagery of her past self, often depicted in white. This is an homage to her Christian upbringing as white clothes are a staple of the Sunday-best. Both her older and younger self are holding guitars to show her journey from being introduced to music through the church, to making covers on YouTube, and eventually releasing her music video for her original song. Loving yourself is about looking at where you come from and how far you have gone from there. It is about being proud of who you are and the things you have experienced, good and bad. As a queer, Black woman, Clark has spent her whole life being told that she does not belong or that she is faulty through oppression and hate. It is so impressive to hear her music and see that these experiences have not corrupted her soul. She is passionate about life and being kind to herself, finding her strength from overcoming and acknowledging her life obstacles.

Clark can be described as eccentric, and academic Francesca Royster offers a definition of eccentricity that fits Clark well. Royster’s idea of eccentricity breaks down divisions of race, gender, and sexuality, creating a world where everyone is welcome and celebrated for their differences. “The eccentric joins forces with the ‘queer’, ‘freak’, and ‘pervert’ to see around corners, push the edges of the present to create a new language not yet recognized” (Royster 8). “Love Yourself” is aligned with this concept because self-love is the most crucial step towards accepting each other. For example, the younger Clark in the video gets laughed at by a group of girls, but, having realized the power of self-love, the older Clark brings the girls together simply by the sound of her guitar and voice. This is where Clark’s ability to draw in listeners comes from; she invokes feelings of importance, of celebrating being alive, and cherishing the time we spend together. Collectively, this breaks down any borders made to make people feel less than or other. Clark’s music is to make people feel welcome and appreciated.

In addition to the sound of her voice, musician Clark utilizes natural and serene imagery in her lyrics to cultivate a calming place for the listener, whether they are watching her perform on a local New Orleans porch (or watching her “Letter From The Porch” performance on YouTube), or even just listening to her music from home on Spotify. Clark beautifully connects her smooth, nostalgic rhythm and voice with lyrics that paint a picture of a relaxing and reflective day in the park. Expanding further on her song “Love Yourself,” Clark taps into this sentiment of nostalgia and peace with her words; “wind behind me…. Autumn sky, moss hang high…” are just a few of the lyrics that help to cultivate a narrative where harmony with nature and one’s self are of the utmost value. We are transported to a place like Audubon Park, where we are lightly peddling our baby blue cruiser bicycles on the way to a picnic with loved ones. Motifs of birds and insects flying around create a focus on movement, almost as if Clark moves through various identity formation struggles to then arrive comfortably in her song, “Love Yourself.” The weaving of movement throughout her songs and lyrics creates her unique eccentricity. When thinking of eccentric artists of the past, musicians like Prince and Diana Ross come to mind; these artists seamlessly cross traditional binaries of sexuality and gender in creating moments to be remembered beyond their years. A huge part of Clark’s eccentricity as a musician stems from her natural ability to create music that could be enjoyed throughout any moment in time. Clark’s transcendent melodies give listeners hope for the future in a time “in which ‘faith in the future is hard to sustain’ and, even given a highly mediated world of magazines, newspapers, and television, answers can be hard to find” (Royster 7). Eccentric musicians all possess an inexplicably important quality: the ability to provide a bright light to believe in during a time of great darkness. In this way, Clark is certainly an eccentric musician. Clark can connect with listeners from all different backgrounds through her consistent narrative of discovery, struggle, and celebration of her identity. Much like the city of New Orleans, Clark is timeless and always there to help you explore the unique facets of yourself.

New Orleans is often highly regarded as a place that celebrates all aspects of life itself, and Joy Clark’s music puts an especially meaningful touch onto this cultural message of “Laissez Les Bon Temps Rouler” by encouraging listeners to celebrate the unique facets of their own identity, no matter what that looks like. Clark’s melodic tune and lyrics transcend time. As a listener, you cannot tell if this song was written 25 years ago or ten years from now; Clark creates a timeless story that makes the listener feel transported back in time while simultaneously alleviating some of the loneliness and isolation of the present COVID moment.

This piece is part of the on-going series “The Social and Political Commentary of Artist Profiles,” which is part of an Alternative Journalism Spring 2021 course at Tulane University taught by Dr. Christine Capetola.