What’s a house float without a theme? 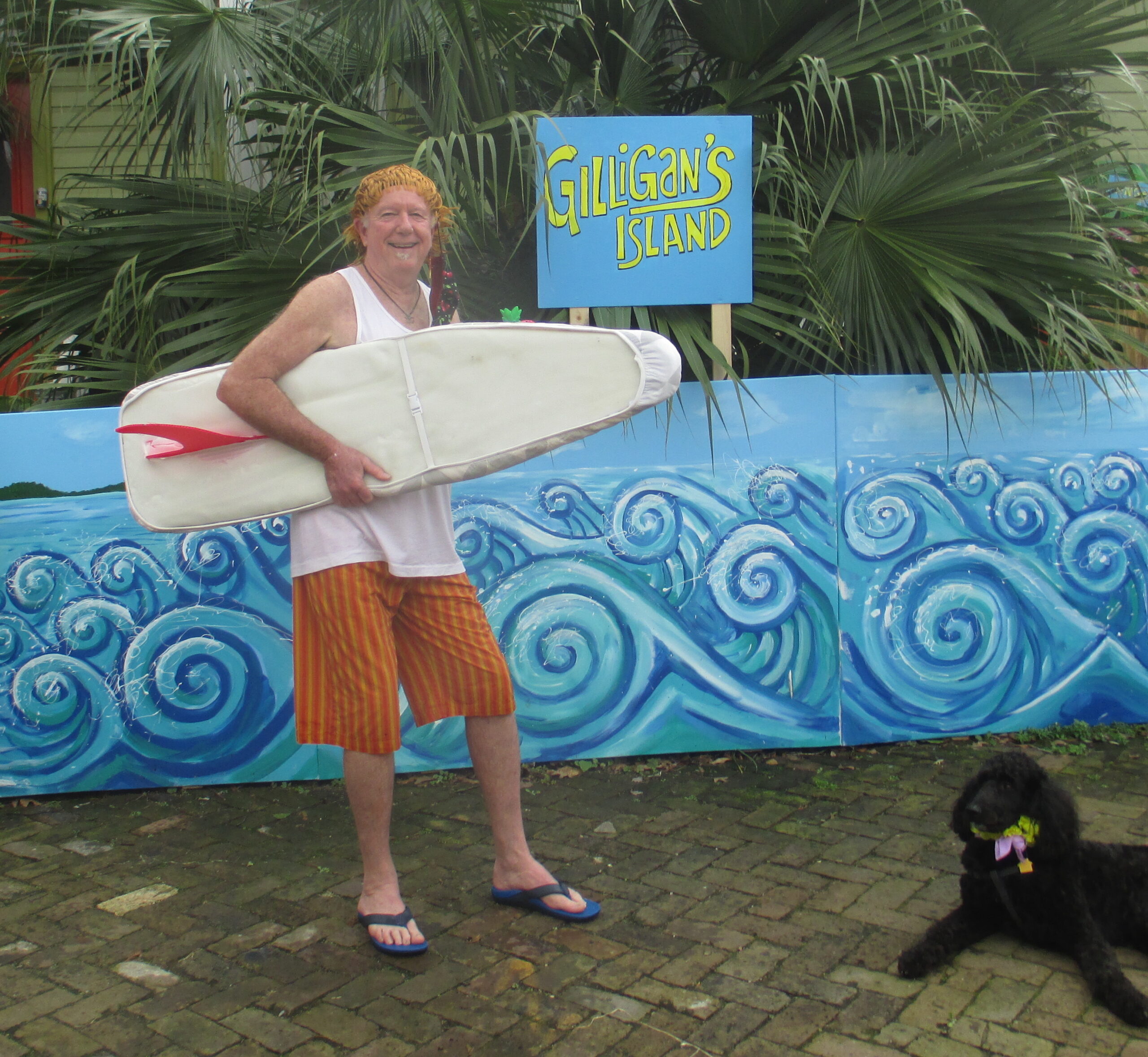 During the Golden Age of Mardi Gras, 1857-1940, float designers projected ideals of beauty, mystery and majesty — their artistry inspired by heroic myths passed down from ancient Greeks, Persians, Chinese and other legendary civilizations. Since Hurricane Katrina, however, parades have become increasingly contemporary: focused on sports, politics, feminism and environmentalism, often choosing satire and whimsy over the classics — or class.

But as isolating New Orleanians craft homegrown floats for Yardi Gras, just how do those mythic themes translate to decorating private homes?

Consider the positives. Narrow shotgun houses with wide porches, eves and balconies actually make excellent substitutes for clunky, slow moving floats! Partygoers can move instead of the parade — like the mountain coming to Mohammad — at their own pace and direction, day or night, with or without mule power. Plus, there’s lots of places to hang things. A plethora of primordial flowers, flamingos, bees, sharks and beads are already adorning dozens of homes, as well as flashing purple and green lights with metallic tinsel galore, sometimes even with sound effects. But ought there also be an underlying theme? 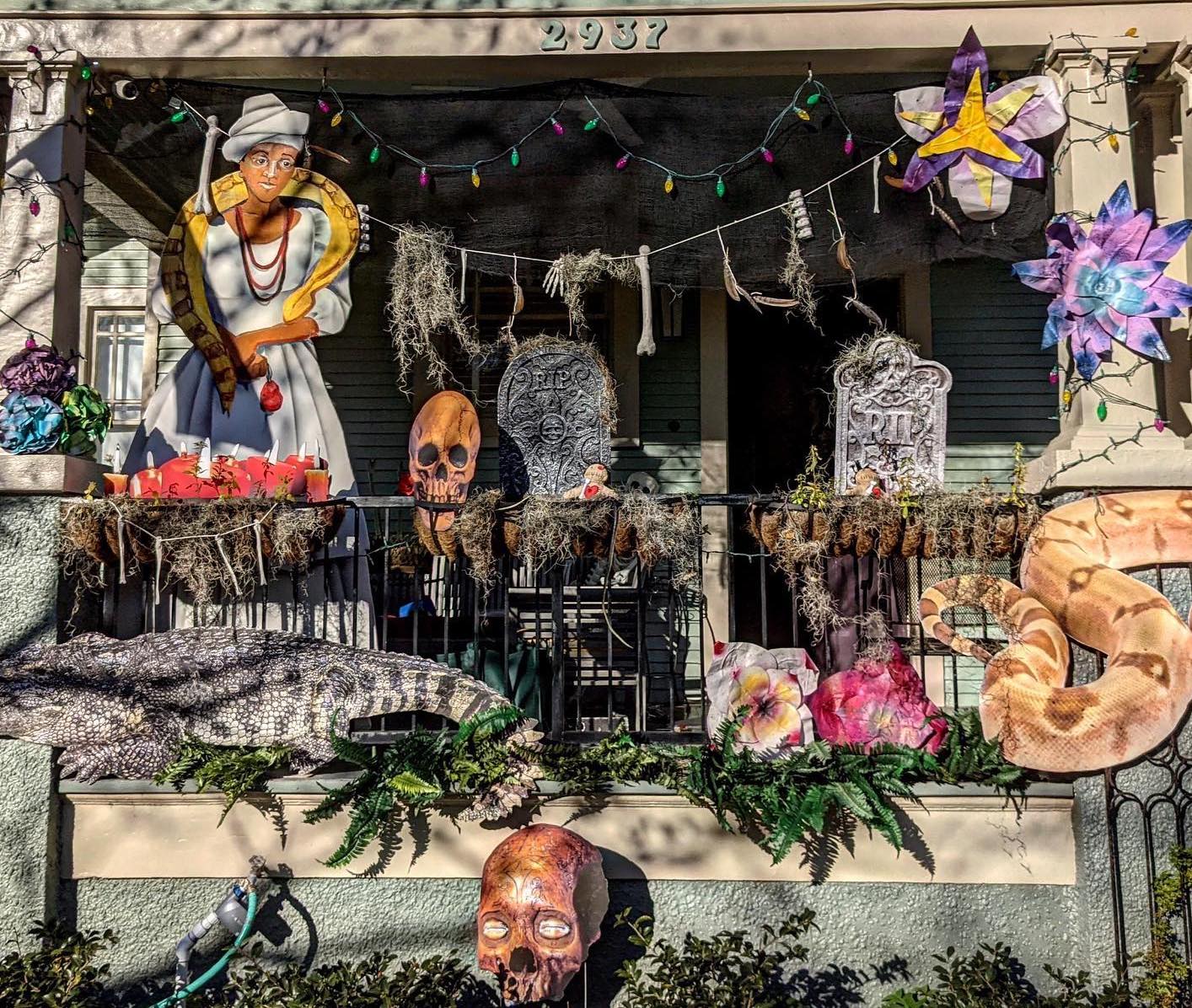 I pondered this pithy question last weekend while dropping in on the groundbreaking ceremony for Gilligan’s Island Irish Channel house float.

The Irish Channel adopted Channel Surfing for its overarching theme. Thus, homeowners Lee Howard (Thurston Howell III) and Barbara Newton (Gilligan), who concocted the set, were joined for its launch by a cast of jaunty characters from the 1960s sitcom, including neighbors in grass skirts. Michael Burke sportingly donned vintage swim trunks and flip-flops while carrying a surf board fashioned from a tabletop ironing board, ready to catch the curl. 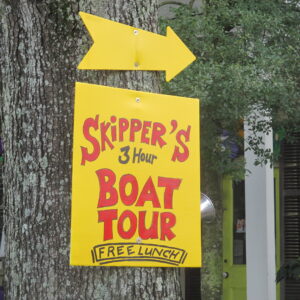 Passing out pizza slices and rum punch served in plastic coconut drink cups, Howard reminisced about watching the memorable series. (Gilligan’s Island was a more upbeat version of the later Lost, though both featured an ensemble of mismatched shipwreck survivors stranded on a tropical isle.)

Interviewed on Emmy TV Legends,Gilligan’s Island’s creator Sherwood Schwartz explained the comedy’s long-lasting appeal: “…the show’s underlying concept is still the most important idea in the world today. That is, people with extremely different characters and backgrounds being in a situation where they need to learn how to get along and cooperate with each other as a matter of survival.” Could TV provide the mythology for our era?

Come to think of it, this pandemic is sort of a shipwreck with interdependent souls adrift, managing to still celebrate while struggling to survive.

Other Irish Channel, Covid influenced TV-themed house floats include 2021 in Jeopardy, Return to The Office 2021, Schitt’s Channel with Rosebud Motel, Tiger King and the all-inclusive Hallmark Channel. For those rejecting TV, there is an alternative Book Lovers’ house float. 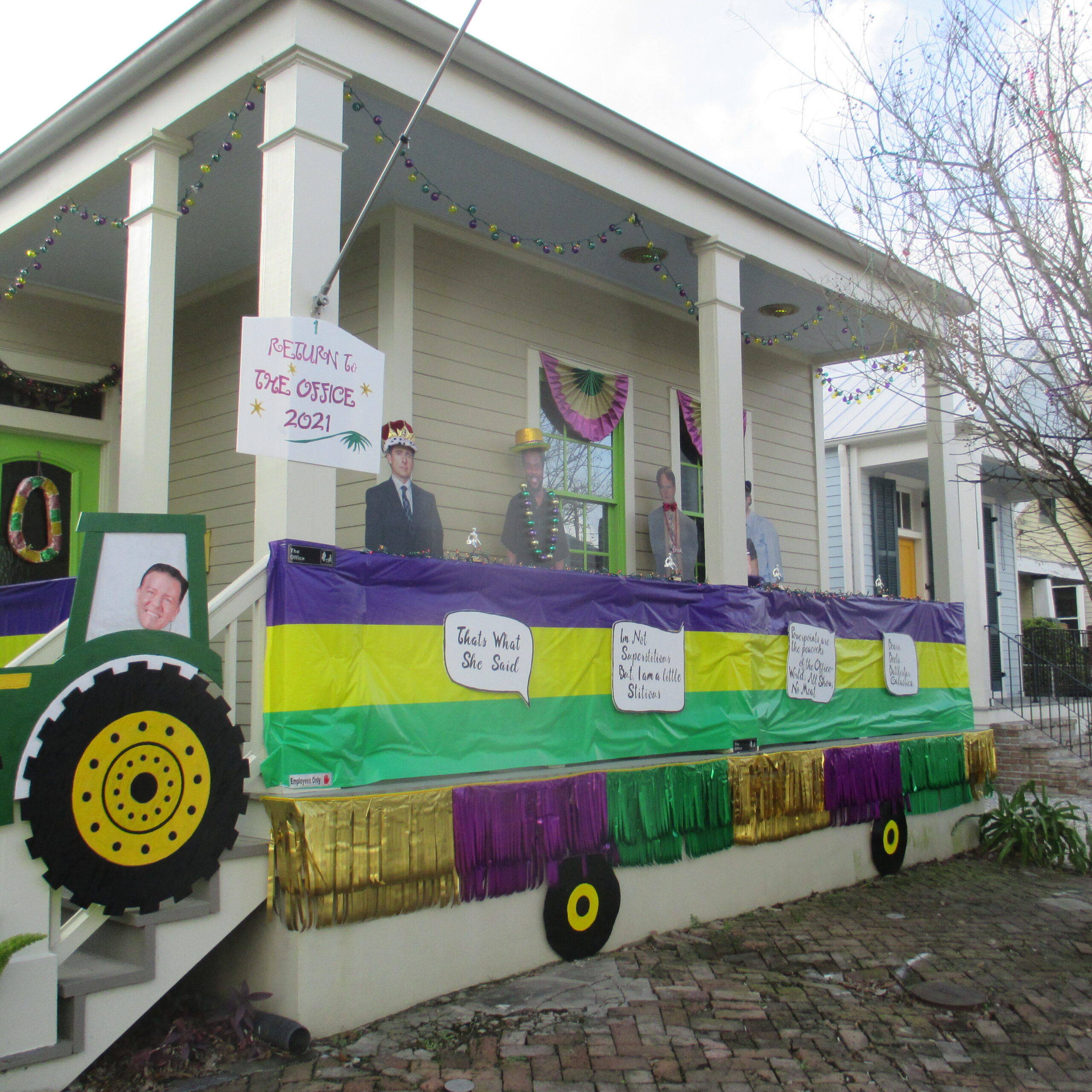 The Holy Cross neighborhood has a more loosely defined theme, Crossing the Canal, but is that really a theme? Louis Fischer, a premier float designer in the 1920s, believed all artistic themes must have a literary source, such as Alice in Wonderland. “Find the story,” she counseled Henri Schindler, New Orleans’ Mardi Gras guru, then a young man.

Krewe of Muses has embraced traditional mythology of Mardi Gras themes while incorporating popular culture. After all, the nine muses of Greek mythology were idolized for their divine beauty, grace and allure, arousing the inspiration for creation by artists, especially poets, dancers, musicians and philosophers. How can they go wrong with that? 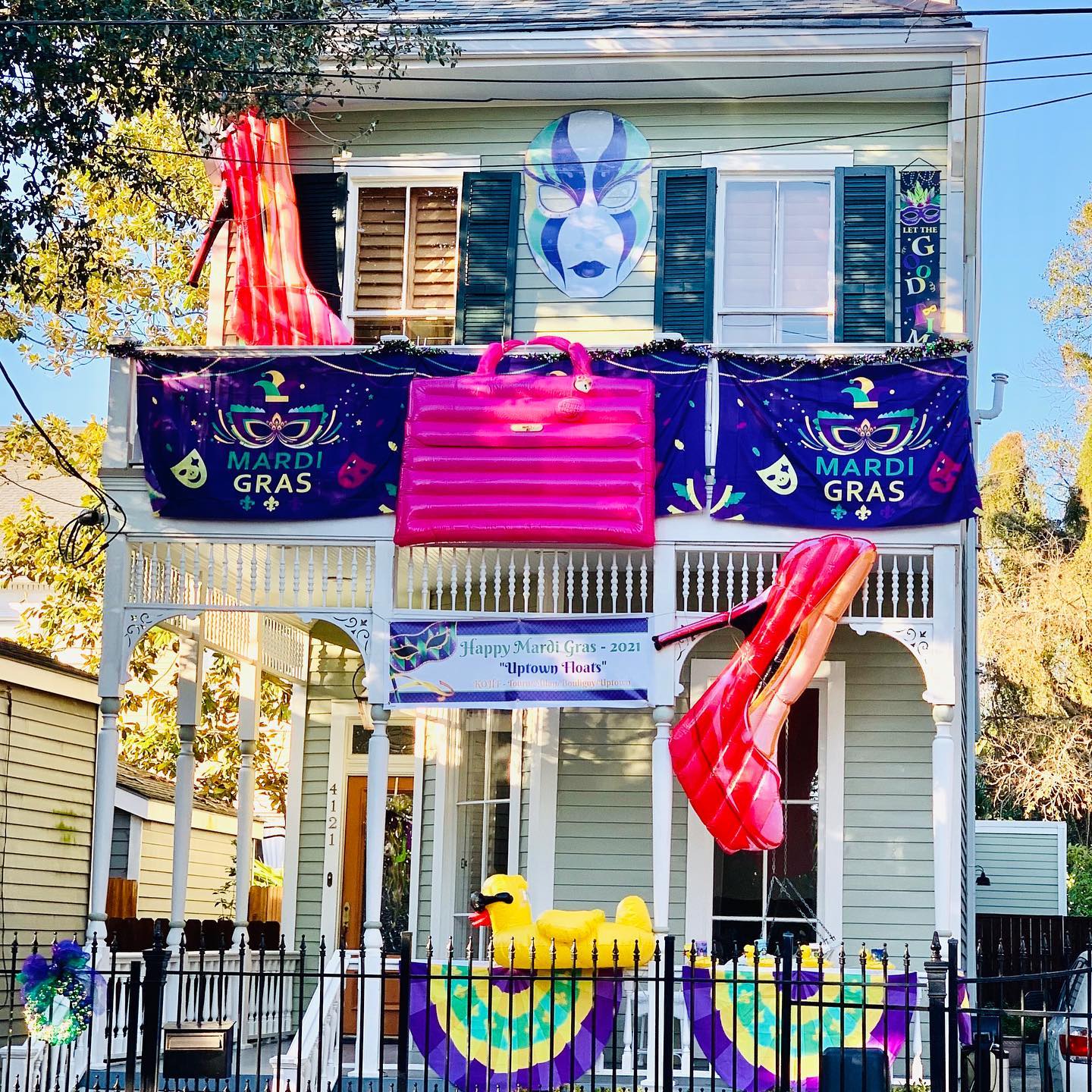 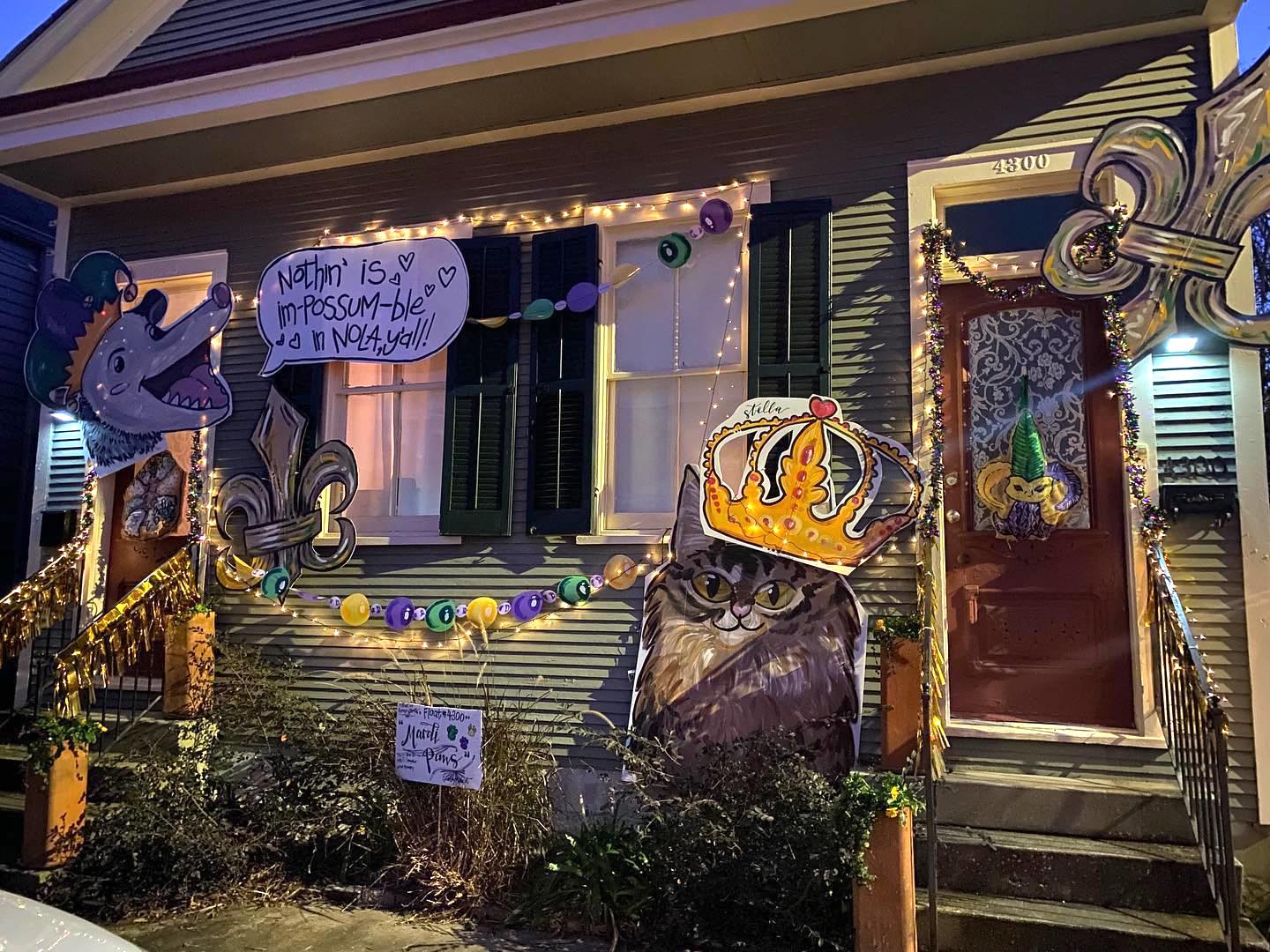 Virginia Saussy, Muses theme chairwoman, says, “[Muses parade] is like a joke with 23 punch lines. Fortunately, for house floats, it can be one joke. Or one beautiful statement or sentiment. Or your house can just express one’s love of the season.”