Consider the Krewe of Muses shoe

Editor’s Note: Taking a page from David Foster Wallace’s “Consider the Lobster,” writers in Kelley Crawford’s Alternative Journalism class at Tulane University chose objects that are rather ubiquitous. Then, they dove into the symbolic narrative those objects tell. With Mardi Gras on the horizon, we are looking into the high heel and the Krewe of Muses because we love our women, and we love what they’ve done with the shoe!

Think of items that would be considered “girly.” What comes to mind? The most common answers would include makeup, nail polish, clothes, and above all, high heels. High heels have become the pinnacle of modern femininity and act as the most expressive performance of gender. They have also become hyper-sexualized, even linking one’s supposed attractiveness to their choice in shoes. However, despite the norms that have been set for women to wear them, many have decided to put their heels away for good. The women of the Krewe of Muses have not taken such a path and have turned the high heel into the famous symbol of their parade.

The Krewe of Muses was founded in 2001 as the first all-women’s krewe to parade at night on the Uptown parade route. “I learned about the different parades and there wasn’t one I really wanted to be on – there wasn’t anything wrong with them, but there just weren’t that many opportunities for women,” said Muses founder Staci Rosenberg. Although the first Mardi Gras parading groups debuted in 1857, women did not parade until 1941 when the Krewe of Venus rolled, which came with crowds of men throwing tomatoes and rotten eggs at their floats. Muses wanted to open a space where women could feel accepted and reach the levels of success that larger, distinguished krewes had achieved. The krewe has become known for their infamous throw, the high heeled shoe, decked out in colorful glitter and embellishments and given to a select number of parade-goers each year. Muses even has their most prominent float, the 17-foot tall, fiber-optic red high heel, carry their ‘honorary Muse’ throughout the annual parade. 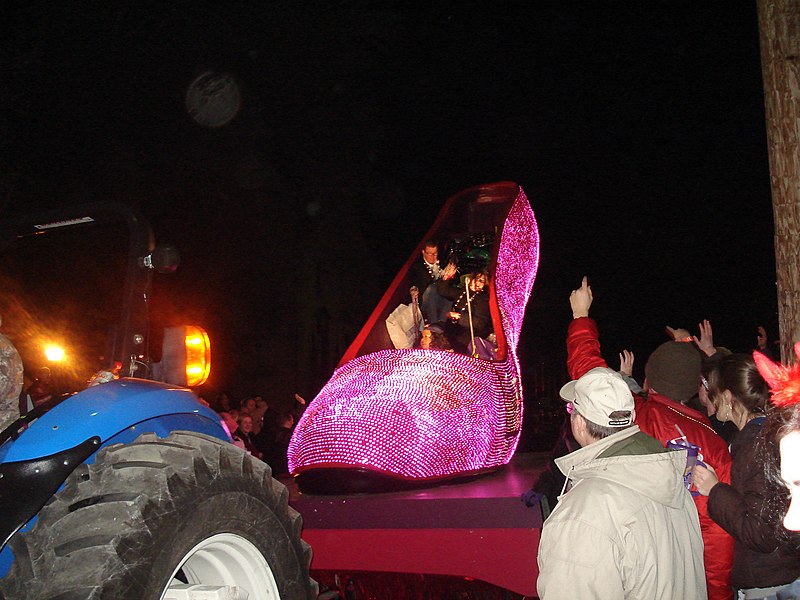 The high heeled shoe is an interesting choice for a seemingly barrier-breaking women’s group. Although they are now associated with femininity and all things ‘girly’, this was not always the defining characteristic of the heel. Originally, they were created as a men’s shoe in Asia, worn by warriors who needed to latch themselves into their horse’s stirrups. The early heels then made their way to Europe, where the style was adopted in military garb inspired by those worn by the Persians. Cameron Kippen, a shoe historian, said of this shift, “Subsequently you had these macho men swaggering about in boots with heels, but they very quickly became fashionable for rich courtiers and kings in particular.” As they became implemented across the high courts and rich elites, women decided to don heeled shoes to seem more masculine; Catherine de Medici wore them in the 16th century as a status symbol and to look taller at her wedding. The masculine high heel died in the 1700’s, when the rise of the Enlightenment caused men to disregard privilege and fashion, and act in ways that were considered rational, while women were not held to the same ideals. “Female desirability begins to be constructed in terms of irrational fashion and the high heel,” says Elizabeth Semmelhack of the Bata Shoe Museum in Toronto. From the period of Enlightenment onward, feminine gender identity was intrinsically linked with high heels, and this only escalated over time. 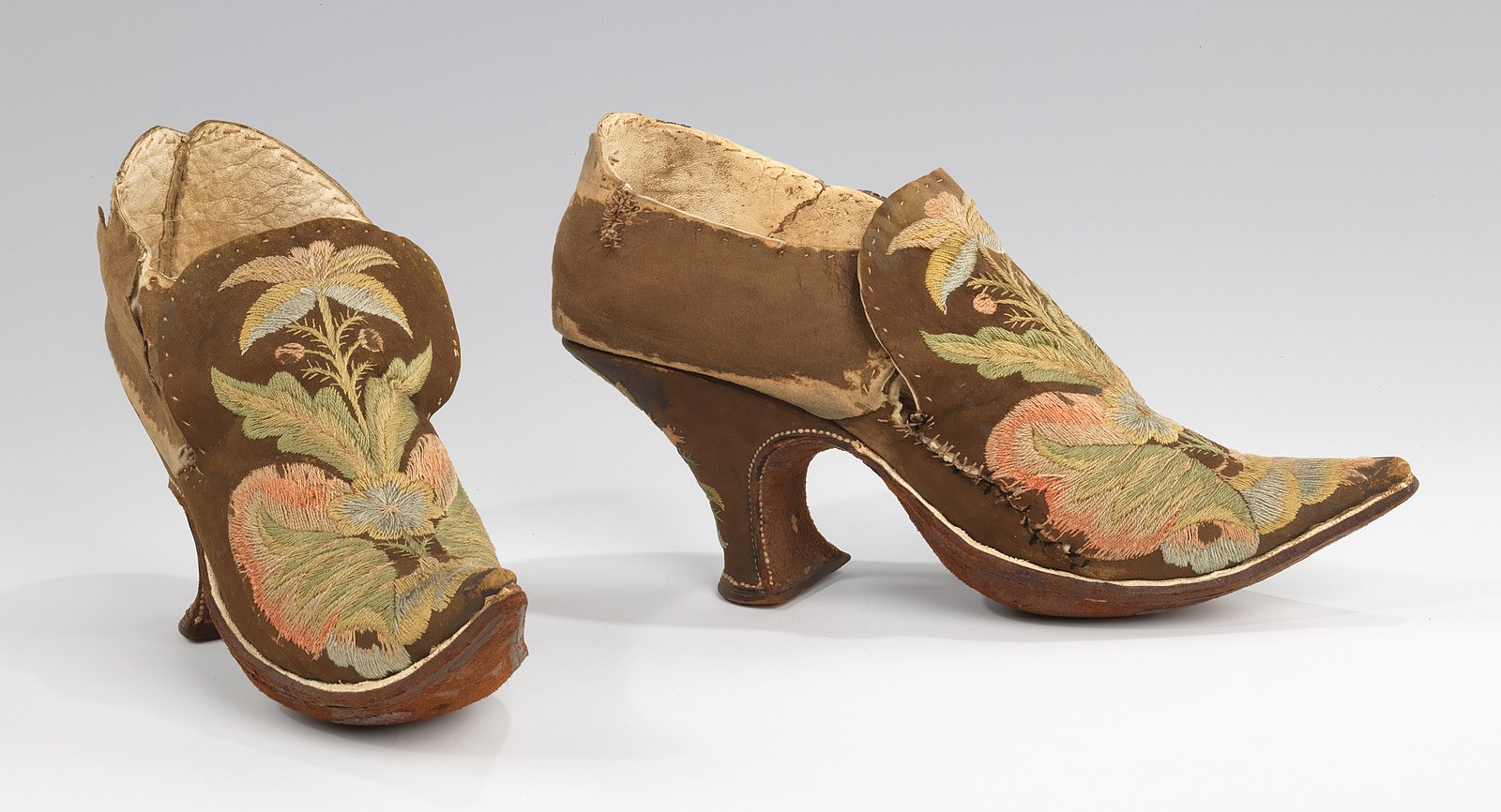 As we know them today, high heeled shoes represent a certain type of woman in many people’s eyes: an elegant, fashionable, put-together person. Especially in a professional setting, wearing painful, toe-pinching shoes for eight-hour work days is not even second-guessed. On the flip side of female professionalism, high heels are linked to sex appeal. We can thank Hollywood for this sexualization of shoes; with the invention of the stiletto in the 1950’s and the rise of pin-up girls, the high heeled shoe became a symbol of sex. According to historian Greg Jenner, “Hollywood had a huge influence on the rise of heels as the symbol of sexiness.” This concept of attractiveness dependent on women’s shoe choice was, however, not decided by the women wearing the shoes, but the men who looked at them. Essentially, heels were designed by men to create the ‘ideal’ type of woman. Renee Engeln, a psychology professor at Northeastern University, explained that high heels serve as, “a way to literally try to make your body look more like the cultural body ideal. They’re to lengthen your legs and change the way your shape looks from behind. That’s not accidental.” It also adds up that most of the shoe designers who were creating the first stilettos were men. In 2011, famed shoe designer Christian Louboutin told The New Yorker, “The core of my work is dedicated not to pleasing women but to pleasing men.” 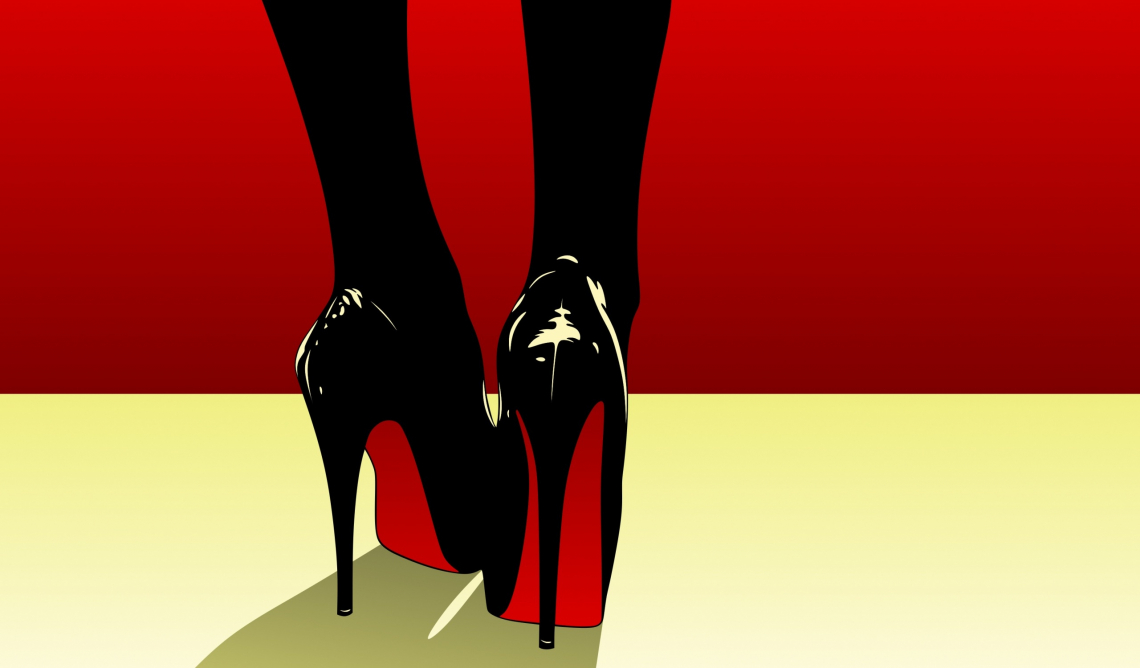 Despite the demeanor of elegance or attractiveness, the reality is that high heels are painful. Walking in heels is challenging for even the most fashionable, and they are definitely far from practical. “Why do the shoes we choose for ourselves make us less able to run away if we need to run away? … Why do the things that we do supposedly for ourselves cause us long-term physiological damage?” Professor Engeln questions. This concept can be traced back to traditions such as Chinese foot binding; starting around the 10th century it became very fashionable for the Chinese elite to bind the feet of young girls so that they would be broken and continue to break to prohibit growth. The practice became widespread by the 12th century up until the 19th century when China became a nation colonized by the West. Heeled shoes not only immobilize those who wear them but can actually cause damage and alter human walking. A studydone at the University of Jyväskylä, Finland, and Griffith University in Australia found that in long-term wearers of high heels, walking in heels shows a substantial increase in muscle fascicle strains and muscle activation while standing. Another study, done in 2012 at the University of Copenhagen, found that during high-heeled walking there is a substantial increase in bone-on-bone forces in the knee joint, which can explain the higher observed incidences of osteoarthritis found in the knee of women compared to men.

Bearing the discomfort of the shoes to please others, especially men who are not put under the same expectations of heel-wearing, has been challenged by new waves of feminist thinking. In addition, sales of pumps, platforms, stilettos, and other heeled shoes have declined in recent trends as women are embracing more comfortable fashion options. Throughout the U.S. in 2017 sales declined by 11 percent, according to the NPD Group’s Retail Tracking Service; shoes with heels over three inches had sales diminishing the greatest. Many women have decided to give up wearing high heels altogether. Marie Southard Ospina wrote out her proclamation, “Things That Happened When I Stopped Wearing Heels” in Bustle,stating, “For me, separating the trends and styles that genuinely give me joy versus the ones that I think I have to wear to fit someone else’s standard has been crucial in my journey to body positivity.”

As one of the first women’s krewes, Muses boldly disrupted the male-dominated Mardi Gras scene. The original krewes, formed in the mid 19th century, were established by prominent businessmen in the city. The male members of these early krewes were tightly knit within political and business circles, furthering a system that left women out. This pattern continued over time, with krewes operating like exclusive fraternities: you had to know somebody to receive acceptance. The Krewe of Muses challenged this, accepting all women who wanted to join at its start in 2000. Virginia Saussy, a founding member of the krewe, said “Muses allowed an opportunity for people who had only been allowed to be in the audience before to be in a show.” For this female-powered, patriarchy-destroying group, it is quite paradoxical that they would choose an object that is overwhelmingly linked with sexism as their emblem. So the next time you’re lined up alongside the Muses parade route, trying to catch a shoe, think about that sparkly stiletto and the messages it holds