Craving Some Carnival: Consider the shoe

When we think Mardi Gras, we think about shoes. What can you walk all those miles in, yes, but more importantly, why is the shoe the central focus of Muses? Turns out, it’s got a deep history, and writer Carly Shaffer steps into the thick of it. 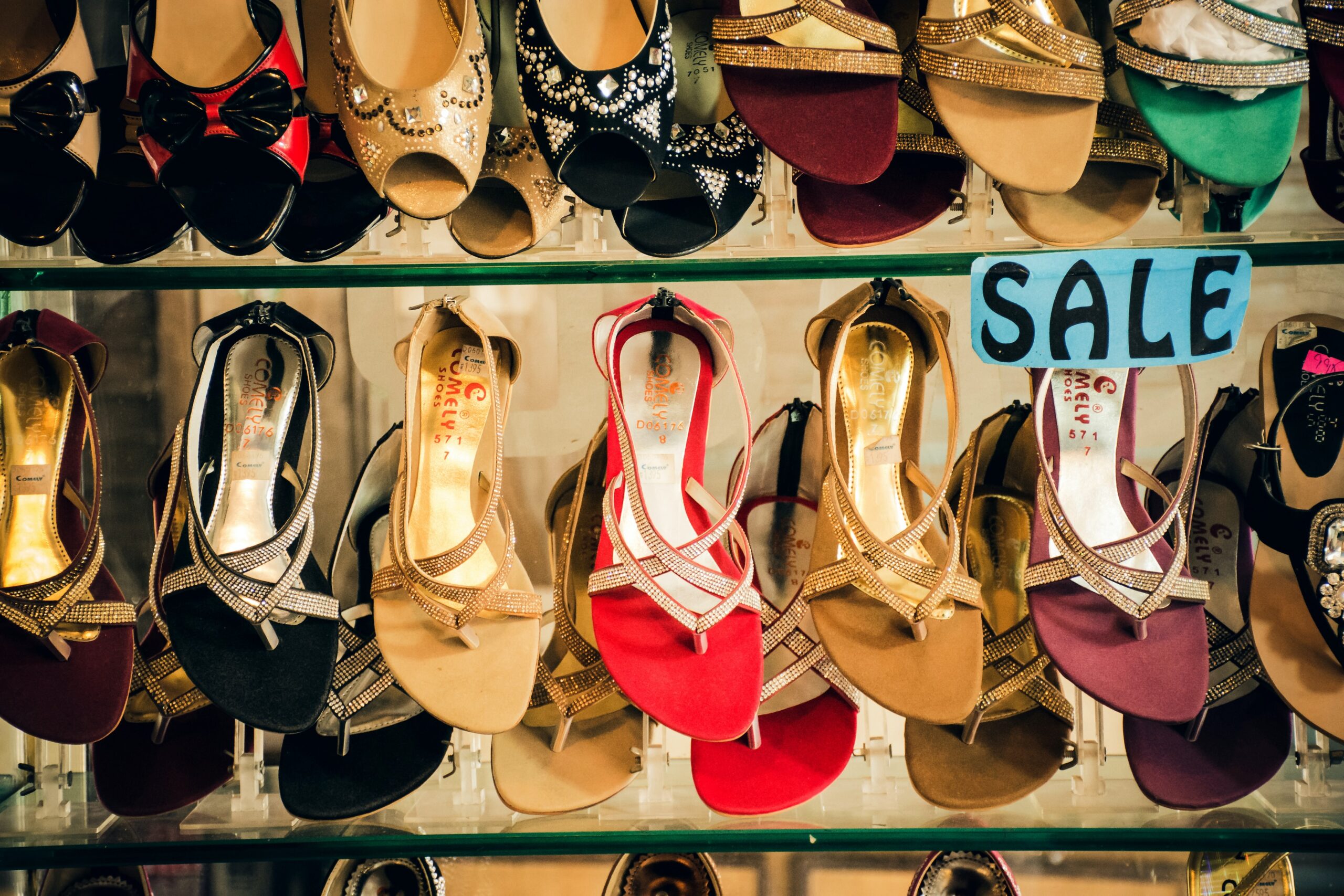 Take a walk through the local mall (or a scroll through Zappos.com), and you will be bombarded with shoes.  Flip flops.  Strappy sandals.  Nike sneakers with the iconic swoosh.  Loafers.  Clogs.  Tevas.  Rain boots.  Cowboy boots.  Crocs.  Ballet slippers.  Tap shoes.  Stilettos.  There is a shoe for every possible purpose, and each one has its own personality.  It is no wonder that the average person owns nineteen pairs.

Shoes have evolved into fashion statements, but they certainly did not originate with that goal in mind.  The first shoes were created for the sole purpose of protecting people’s feet.  They were assembled with different materials according to geographic region and climate.  Northern shoes often consisted of leather, whereas Southern shoes were made of palm leaves and papyrus fiber.  In ancient Egypt, it was easy to determine someone’s socioeconomic class “by simply looking at the footwear they wore.”  Enslaved people went barefoot, members of the working class wore slip-ons, and shoes became more elaborate as you climbed the social ladder, with shoes of red and yellow fabric “reserved for the highest society only”.  These class distinctions persisted into the Middle Ages, with the most intricately crafted shoes associated with tremendous wealth and power.  This was particularly evident in Greece and Rome, wherein the most elaborate sandals belonged to the highest ranked soldiers.

During the Early Modern Period in Spain and France, footwear became more patterned and ornamental.  This new norm persisted into the Renaissance.  Unsurprisingly, royals had access to the best shoes, which were fabricated with rich velvet and an assortment of lavish decorations.  Commoners, on the other hand, had to make do with simple foot coverings.  The dawn of the Industrial Revolution kickstarted the mass production of shoes, which enhanced their comfort: for the first time, different molds were used for left and right feet.  It also increased their accessibility: quality shoes were finally made available to more than just the richest few.

Many people today put a considerable amount of thought into dressing their feet, choosing shoes that are comfortable, supportive, professional, elegant, sexy, or fun, depending upon the occasion.  We often look to our favorite athletes and celebrities for shoe-spiration, then copy their choices.  Basketball stars Michael Jordan, LeBron James, and Kobe Bryant are to be credited with the meteoric rise of Nike.  Recently, Vice President-elect Kamala Harris has incited a Chuck Taylor frenzy.  Shoes have come a long way from being a mere necessity.  They have become a much-deliberated form of self-expression. 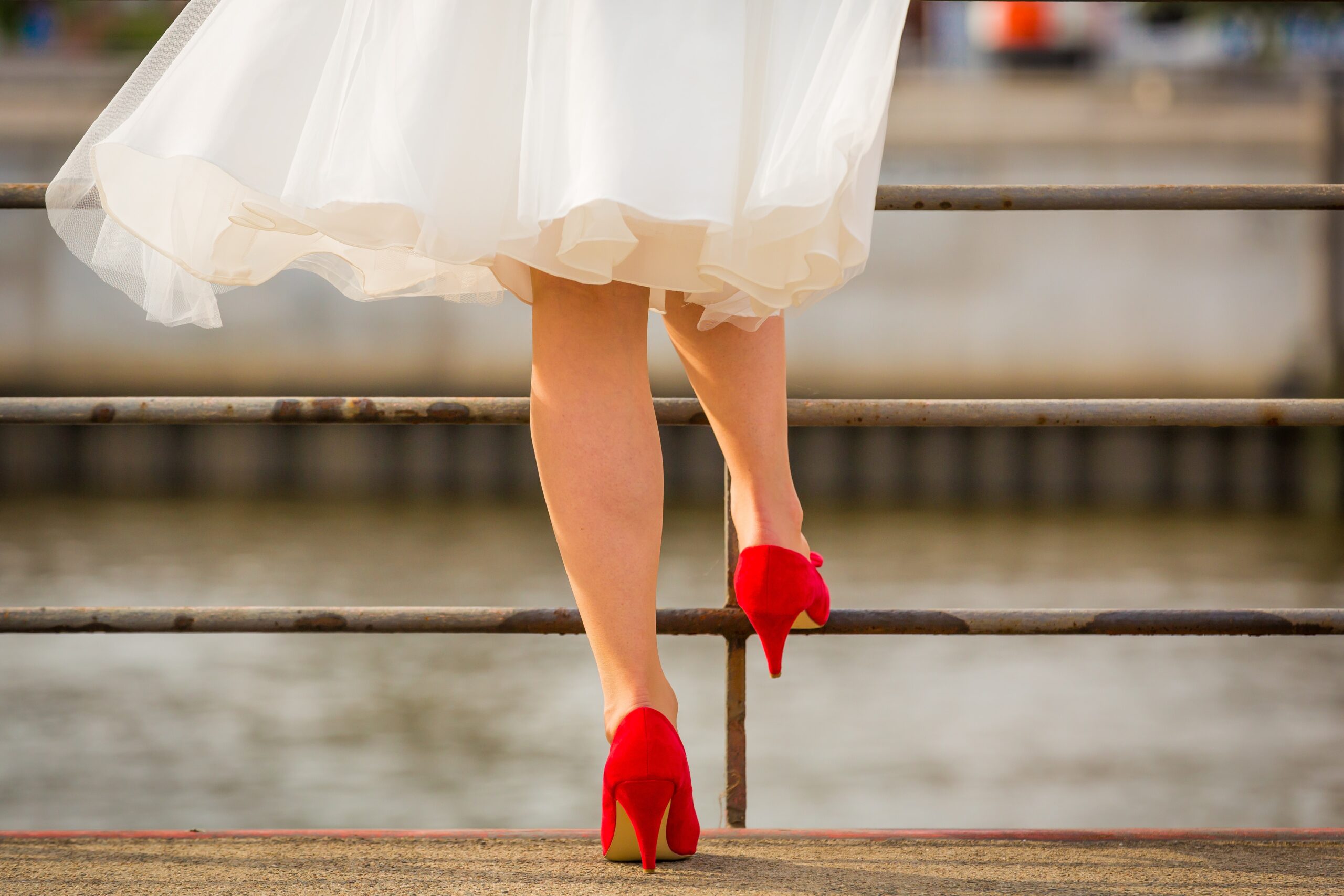 Expression or oppression?  High heels are a hot debate.  Photo by: Robert Metz.

High heels are one style of shoe that have developed an “unquestionably feminine association.”  In fact, they were invented for men.  Their origins can be traced back to fifteenth-century Persia, wherein male soldiers wore high heels to keep their feet in their horses’ stirrups and to appear taller and more threatening when staring down their enemies.  Noble men in Persia and elsewhere also wore heels to communicate their lofty positions in society.  In 1673, King Louis IV introduced shoes with red high heels and soles to French aristocrats, and the fad spread like wildfire throughout the continent.  Women decided to try them for fun, in an attempt to look “fashionable and daring” and appear more masculine.  Thanks to the pervasive influence of Enlightenment philosophy, it stuck.  The public perception of high heels changed, with people suddenly viewing the once-revered shoes as frivolous and outright unnecessary.  Men, even then obsessed with maintaining their manliness, ceased to wear heels, and they were thus ascribed to women.

There is a spirited debate over the place of high heels in modern society.  Women are commended for wearing them, as they are widely deemed appropriate for days at the office and nights out on the town.  An estimated 72% of women will wear high heels at some point in their lifetimes, in an effort to follow Coco Chanel’s advice and keep their “heels, heads, and standards high.”  In 2018, House Speaker Nancy Pelosi, who has never been seen in flats, memorably gave a record-breaking eight-hour speech defending DACA recipients while wearing four-inch high heels.  But for all their credibility, heels are painful, especially when worn for hours on end.  Some people believe they limit women’s potential and have even likened the act of wearing them to the Chinese practice of foot binding.  50% of women report experiencing blisters and severe foot problems from wearing heels.  They are impractical for driving, exercising, walking long distances, and climbing stairs, and they certainly slow their wearer down.  The high heel as we know it today was designed to look sexually attractive per the heterosexual male gaze.  Many argue that heels keep women rooted in place, as objects of admiration, and keep men interested in them. 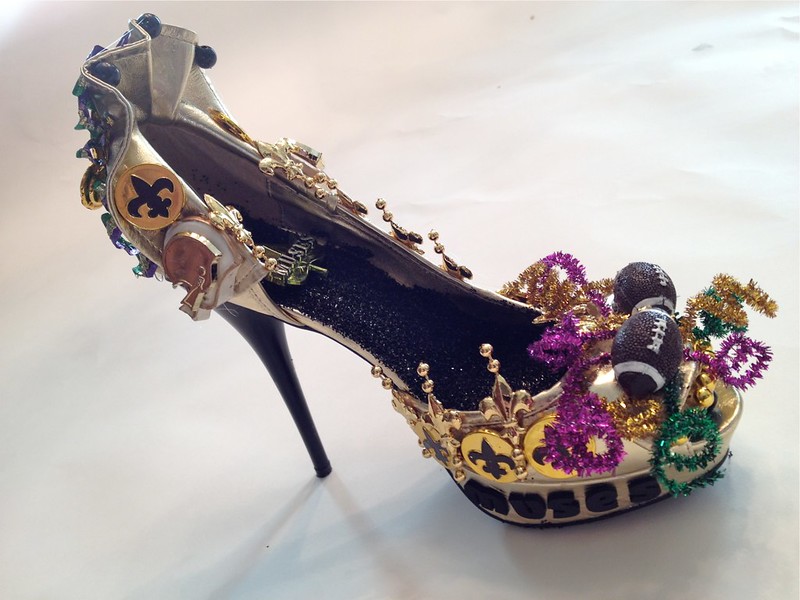 Of course, there is a flip side to this argument.  High heels can also be empowering.  Many women actively choose to wear them because they want to showcase their femininity as a strength rather than a weakness.  Heels often elicit feelings of elegance and glamour and can exude an aura of power.  Women who wear them are able to stand eye-to-eye with men or even tower over them.  Wearing heels also permits women to feel confident in their sexuality.  These shoes are not just for straight, cisgender women.  Many drag queens and LGBTQ+ people make a point of wearing heels to embrace their true identities and present them to the world.  This dynamic is on clear display in the hit Broadway musical Kinky Boots: high heels don’t have to hinder you.  They can be your superpower. 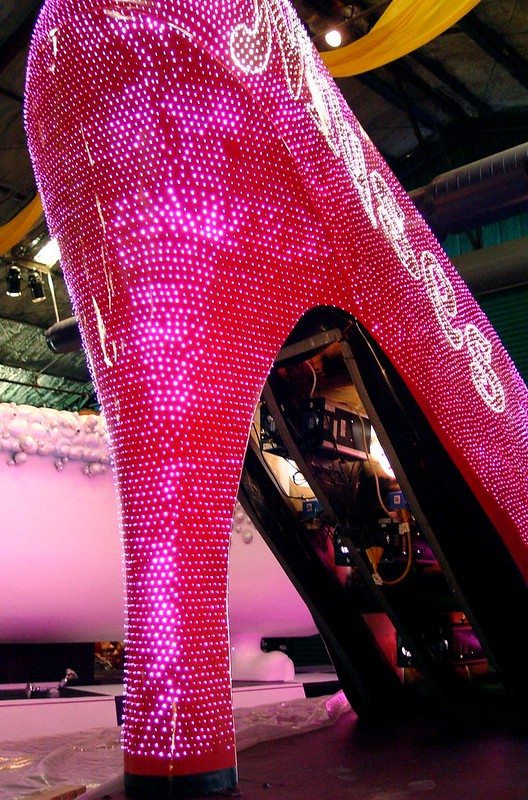 The signature shoe float of the Krewe of Muses parade.  Photo by: Todd Price.

This is precisely the perspective that the Krewe of Muses has adopted.  The famous all-women’s krewe gives out hand-crafted, decorative high heels as their signature throw during their annual Mardi Gras parade through the streets of uptown New Orleans.  Muses shoes come in every style and color of the rainbow and then some.  Many are glittered, some are bedazzled; others are feathered, covered in pom-poms, or lined with seashells.  They are incredibly creative, with some made to look like birthday cakes, flower gardens, fish, and birds.  Often specific to NOLA and Louisiana culture, they feature purple, gold, and green designs, the iconic fleur de lis, blue and white street name tiles, and jazz music notes, among other emblems.  Muses shoes, like Zulu coconuts, are a hot commodity.  Hundreds of thousands of people from all over the city, the country, and the world pack the streets on Muses tHERSday in hopes of securing one of their own.  You often have to know a Muse to receive a shoe, but it is possible to secure one if you dress in costume, wave a clever sign, or hand over a gift, like a decorated bottle of champagne.

The selection of the shoe as Muses’ signature throw, coupled with the group’s admirable mission – to “celebrate the artistic and cultural resources” of the city and bring the entire New Orleans community into the Mardi Gras festivities – signifies that the Krewe views the high heel as a symbol of empowerment and of inclusive, intersectional feminism.  The Muses shoe represents the evolution of the high heel from a mark of male aristocracy to a celebratory piece of footwear for people of all genders.  Perhaps the Muses consider their shoes a tribute to the many women on whose shoulders the city now stands, from Ruby Bridges to Leah Chase and Lindy Boggs to Kathleen Blanco.  Above all, Muses shoes are meant to be treasured as souvenirs of Carnival revelry.  They make those who are lucky enough to catch them feel extraordinarily special.

superadmin. “Shoe News – How Many Pairs Of Shoes Does The Average Person Own?” World Shoe Liquidator, 31 Oct. 2014, worldshoeliquidator.com/shoe-news-how-many-pairs-does-average-person-own.