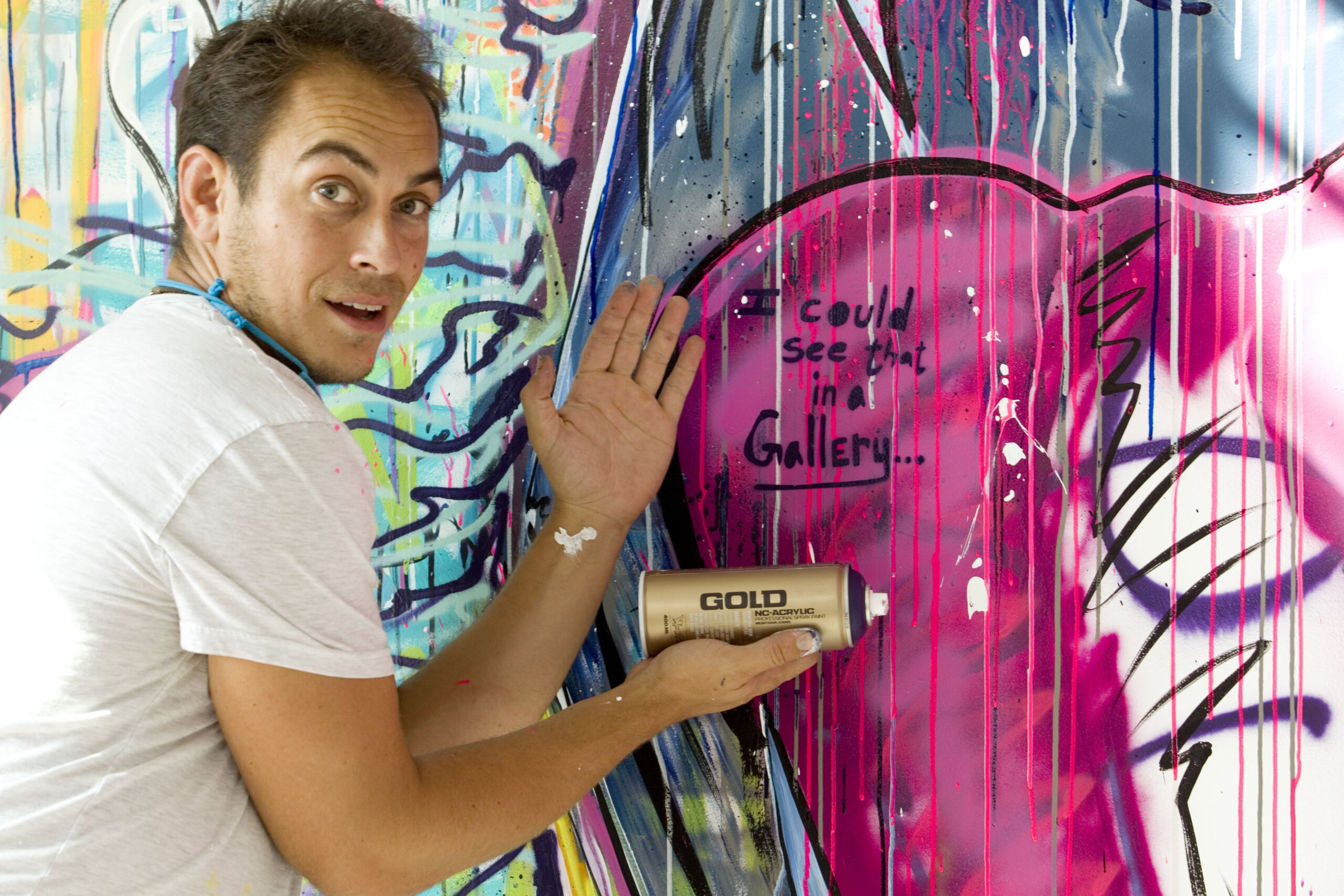 It’s difficult to write about an artist and his art gallery without it becoming some sort of grifting advertisement for their work. But the latest edition to the New Orleans art scene has never asked for such press, and, in my view, inadvertently challenges the entire idea of wanton commodification, consumerism, and “pop” art rampant in “the art world.”

In music, we pay homage to modern bands birthed from generations before. Led Zeppelin and Taj Mahal gave way to Greta Van Fleet. John Prine provided the foundation for Sturgill Simpson, Tyler Childers, and Margo Price. The Clash helped sow the seeds for Public Enemy and Rage Against the Machine. Tupac Shakur and Biggie Smalls paradoxically broke down the doors for Kendrick Lamar, Chance the Rapper, and a slew of brilliant Black writers and rappers who will be heard in 2021 and beyond.

Josh Wingerter is an artist in a similar vein.

His art is spawned from an alternative universe where Andy Warhol met Jackson Pollock, shared a spliff with Banksy, Einstein threw out the gar guts, and Mark Twain implored them for an after-party. Critics will say what this man is doing is derivative; detractors will wonder how this doesn’t infringe on copyright. Those who have ever sampled music would totally understand Wingerter and his art.

In his own mind, I think Wingerter is doing his own thing. 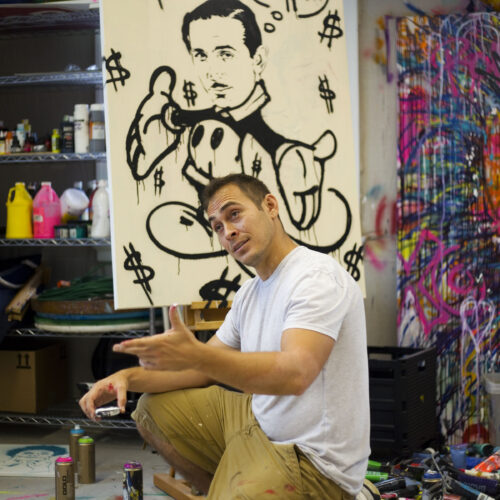 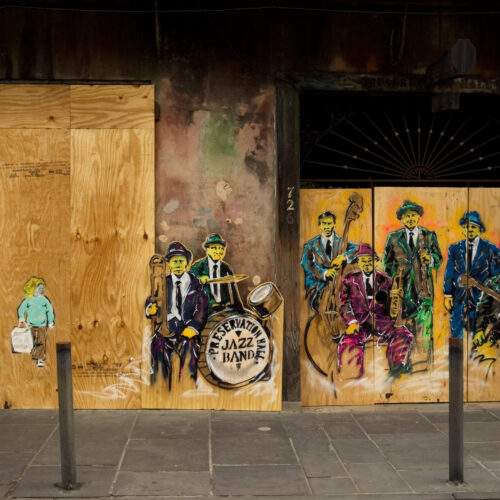 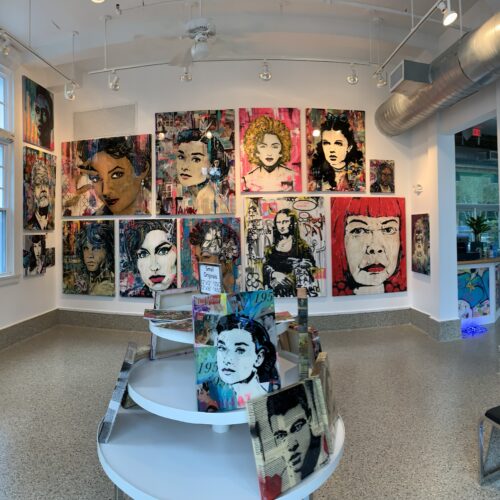 Other local journalists bent on finding an angle to Wingerter’s latest endeavors have been more interested in how he secured a new art center in Westwego, Louisiana, who he was actually paying rent to, and how he’s even managed to stay in business as an artist during a global pandemic.

I personally don’t know if Wingerter cares about these characterizations around Banksy, Warhol, or Pollock. I didn’t ask him that on purpose, because this is what I subjectively see in his work, the same way readers certainly hear the influences of brilliant artists from yesteryear in their current playlists.

I first caught wind of what Wingerter was doing during the apex of New Orleans’ own COVID crisis. As local journalist and writer, Chris Rose, put it:

“Nothing has ever looked more like the post-Katrina New Orleans apocalypse than the French Quarter and Frenchmen Street in recent weeks. Empty streets. Vacant buildings. The vigor of the neighborhoods now bereft of life, love, noise and revelry. Boarded up doorways and windows. Plywood City. Lumber Town. Desolation Row.

Wingerter and others took to these downtown New Orleans burrows and began spray painting the plywood boards covering windows of closed coffee shops, restaurants, and other businesses — laid nearly waste to a virus that, unbeknownst to us all, would shut down the economy for months. 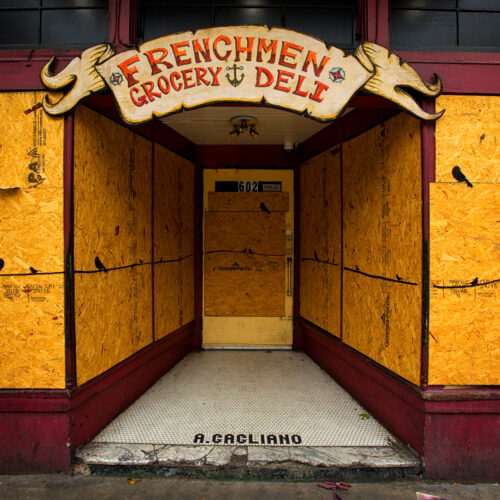 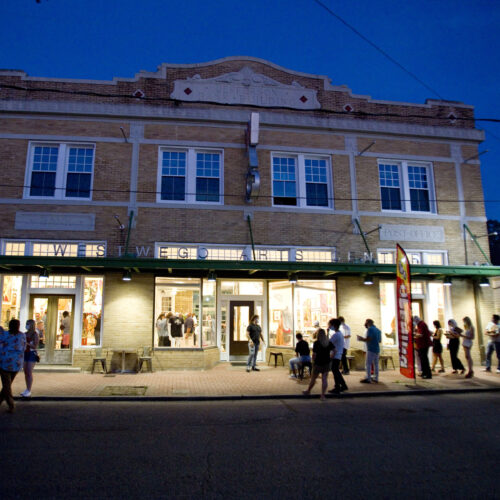 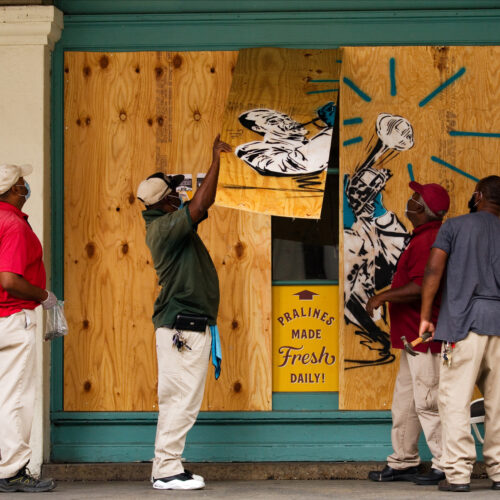 Some Louie Love by Josh Wingerter (Photo by: Nate Jones)

Josh Wingerter invited me to a private showing of his gallery and studio at the beginning of September. There, he toured me through several rooms of his own art, hanging from the walls inside a building once home to the Westwego Bank and Post Office. Upstairs he creates smaller pieces while listening to an eclectic array of music (Mac Miller to the latest Deftones), family members gleefully meet in his studio, Josh takes intermittent breaks with his son to play console games, and behind a Mac computer, his partner, Maria, steadfastly builds an online shop and processes orders for buyers around the world. 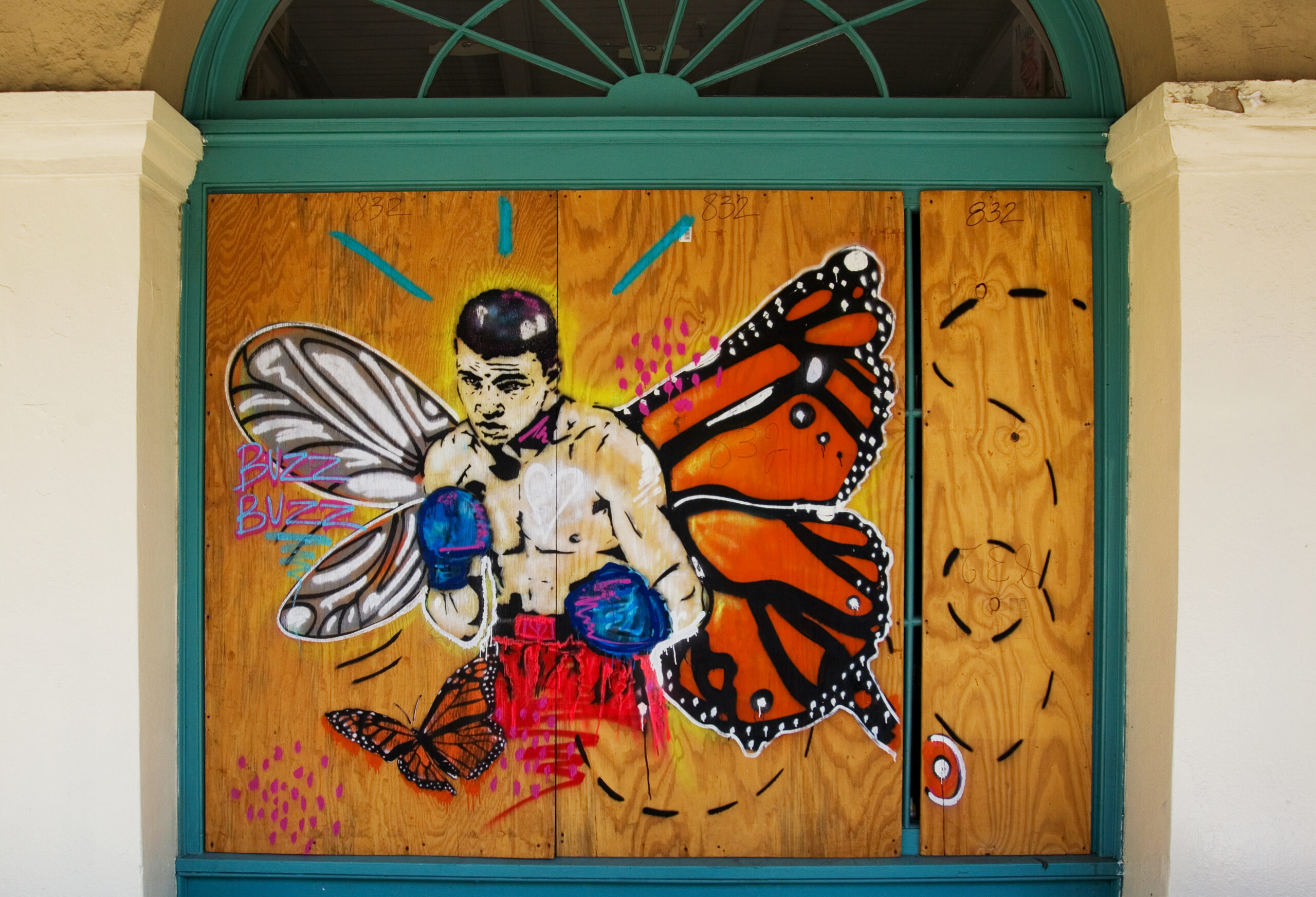 Ali in the artwork of Josh Wingerter (Photo by: Nate Jones)

Wingerter’s graffiti and stencils of local New Orleans heroes and his own original art was documented by local media just months into the COVID-19 pandemic. Videos and photography was captured by another local professional photographer, Nathanael Jones, now in partnership with Wingerter’s seemingly unending projects.

It wasn’t until after he began said projects from the French Quarter to Frenchman street that, in April 2020, Wingerter originally presented a series of three (that later became four) live outdoor paintings that sought to raise money for unemployed hospitality workers, fellow artists, the Second Harvest Food Bank, and Hashtag Lunchbag. The effort raised $57,000 for these services. 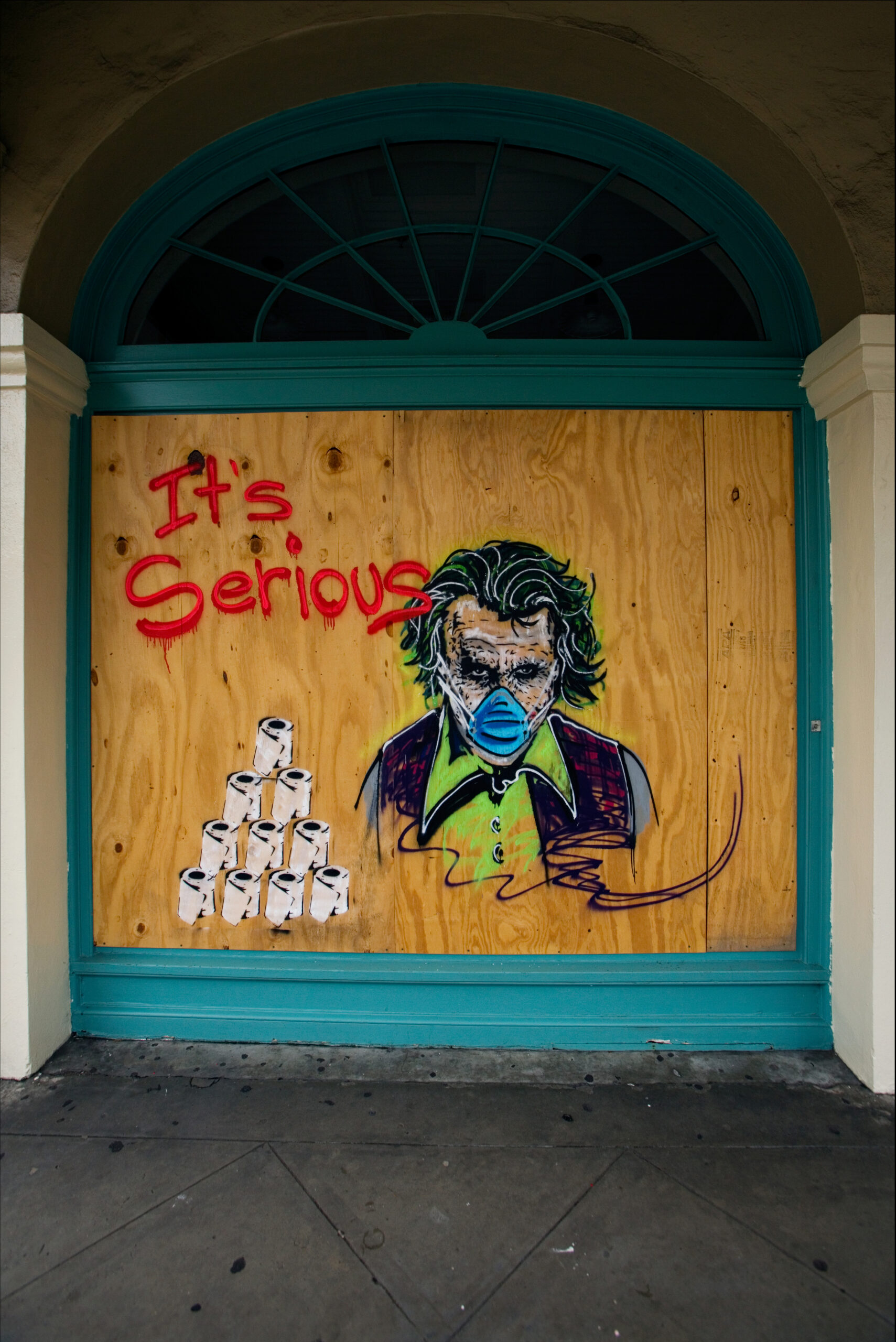 The Joker in art by Josh Wingerter. (Photo by: Nate Jones)

But despite all of this, this is really a story about a man who has been making art since he was a kid. We can squabble over whether this art is modern or postmodern, whether he should use famous images from Walt Disney or Star Wars interspersed with his own writings, drippings, sprayings, or purposeful negligence, or routine care.

“Let’s just do it man, see what happens,” is what Wingerter says. And there’s something to be said about such nonchalant anarchism from a man who is, to me, seemingly apolitical.

And therein lies some kind of beauty. And certainly one I appreciate.

To check out more of Josh Wingerter’s Art, you can visit his studio at 401 Sala Avenue/Westwego, LA 70094 as well as check him out on Instagram @joshua_wingerter

All photo credits go to Nathanael Jones, freelance photographer. You can check out his website and Instagram to see more of his work. 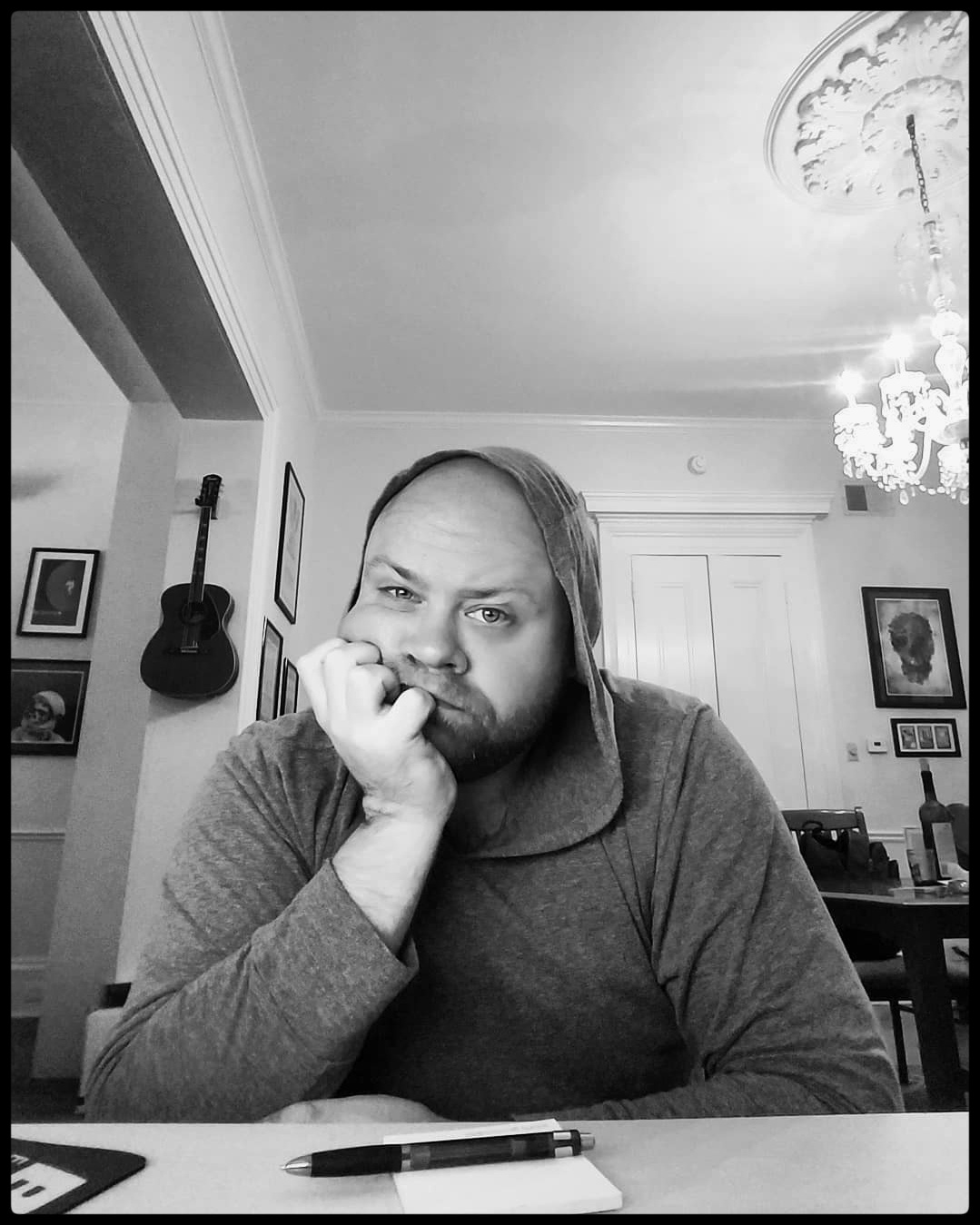 Jody Ray is a writer desperately trying to grapple with his endlessly entertaining disposition among the bourgeoisie. He writes about geopolitics, travel, and art and music sometimes.
Tweet

A Museum of One’s Own: John Isiah Walton
Artists