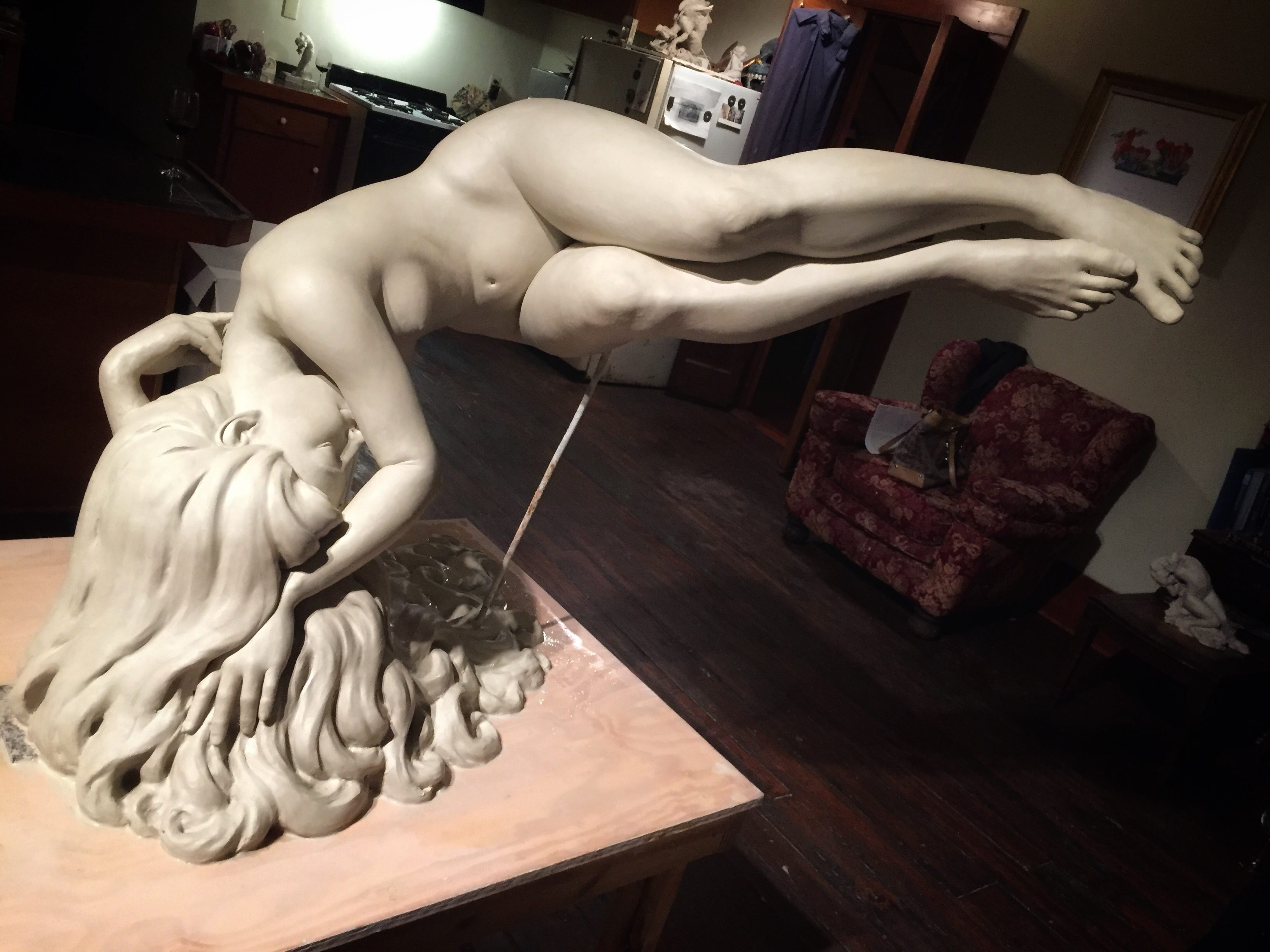 Sculptor Thomas Randolph Morrison was in the middle of explaining the block universe model when it finally hit me; I was there — sitting on a red, overstuffed chair with my boot heel sneaking its way into the veins of the hardwood floor and surrounded with people asking questions about velocity and the female form — because it was predetermined I would be there. The future was waiting for all of us to arrive. This was the philosophical scene set for Morrison’s unveiling of his life-size clay sculpture Venus at the St. Vincent Guest House on Saturday, January 12. The small warm-roomed gathering wasn’t just to reveal his newest sculpture but to also exhibit the physics paper Morrison wrote (and has been working on developing for the past 10 years).

What the hell does that mean?

I’m still working through that question, but the concept of perception elevated itself out of the sentence and landed straight in front of me, directly in line with the Venus sculpture that Morrison would spray down with water periodically in order to keep her hydrated and glistening. From my perception/vantage point, I could see the wet clay that waved itself into Venus’s hair that cascaded across the base of the sculpture. The back of her legs, buttocks, and feet all gleamed in front of me, but I couldn’t see her back, even though I knew it was present and tying together her soft round hips with her dipped head of delicate features that could tame even the wildest sea creature.

As I looked at her, Morrison continued to explain the new interpretation of the special theory of relativity, which through equations and calculations sprouts the age-old question: Do we have free will or is everything predetermined? The answer to that question wasn’t quite as important as the thoughts birthed from the idea. As those observing the sculpture and listening to Morrison’s presentation tried to deconstruct the theories being expressed, Morrison connected the concepts in his paper to a reel-to-reel film. All of the frames are already present in the full film (the future), but the audience sees them unfold one frame at a time (the present).

Questions about moving backwards in time arose, and while the science didn’t hold up as solid backing for time travel into the past, the sculpture in front of us did.  When someone asked Morrison what would happen to Venus after the night was over, Morrison started describing the next steps in the process. Venus would be covered in rubber in order to make a mold for the wax that Morrison will once again sculpt; this time to ultimate perfection since from there she will be sent away, and, after a series of steps, she will be filled with between an 1/8″ or 1/4″ of bronze. 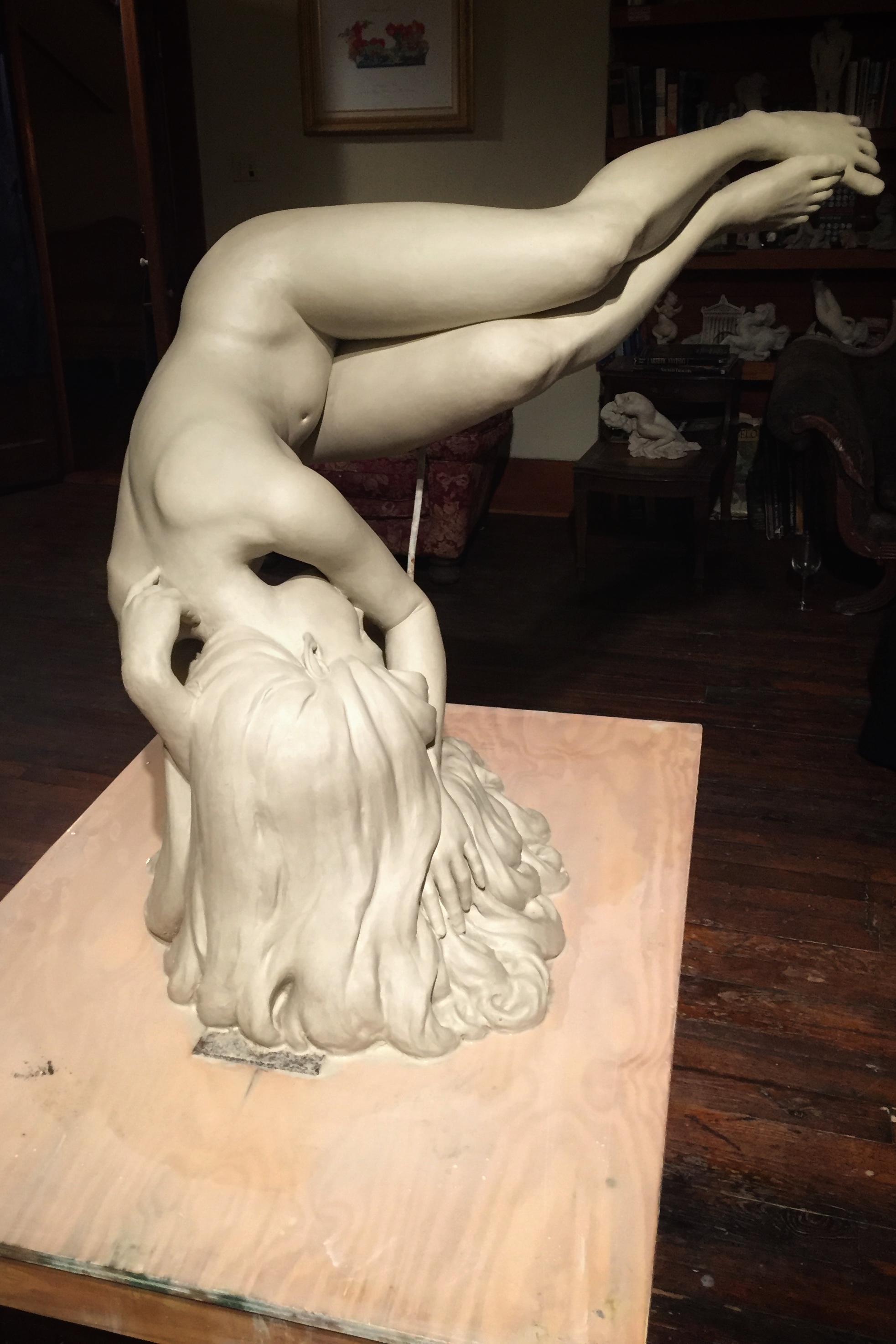 Bronze, which has been used since 3150 BC, is notoriously precise because it’s a copper-based alloy with a lower melting point. As Morrison explained, “it can even pick up a fingerprint from the mold;” that’s how precise it is.

Now, back to the time travel. While Venus is in this rubber mold, she will not get any water; she will dry out; she will crack; she will become the dust she was before this process even started.

We are seeing her future form before it has been made, and waiting beneath that form will be her past existence as dust without water. Although Morrison said that his presentation and paper on “New Interpretations of the Special Theory of Relativity” didn’t necessarily link together with the Venus sculpture — “It’s good to use both sides of our brain,” he said with a smile — Venus embodied all the concepts present that evening. Here is a goddess that dates back to 220 BC stationed in the middle of a dilapidated yet loved space in 2019. Surrounding her are fixated eyes that may all be seeing different curves and movements of her form, but for one moment in time and space, we were all looking at beauty.

And if there’s anything that can break a theory in the world, it’s the love of beauty.

We’ve got your weekend: Haunting nights of art, music, and a run for a diamond
Events