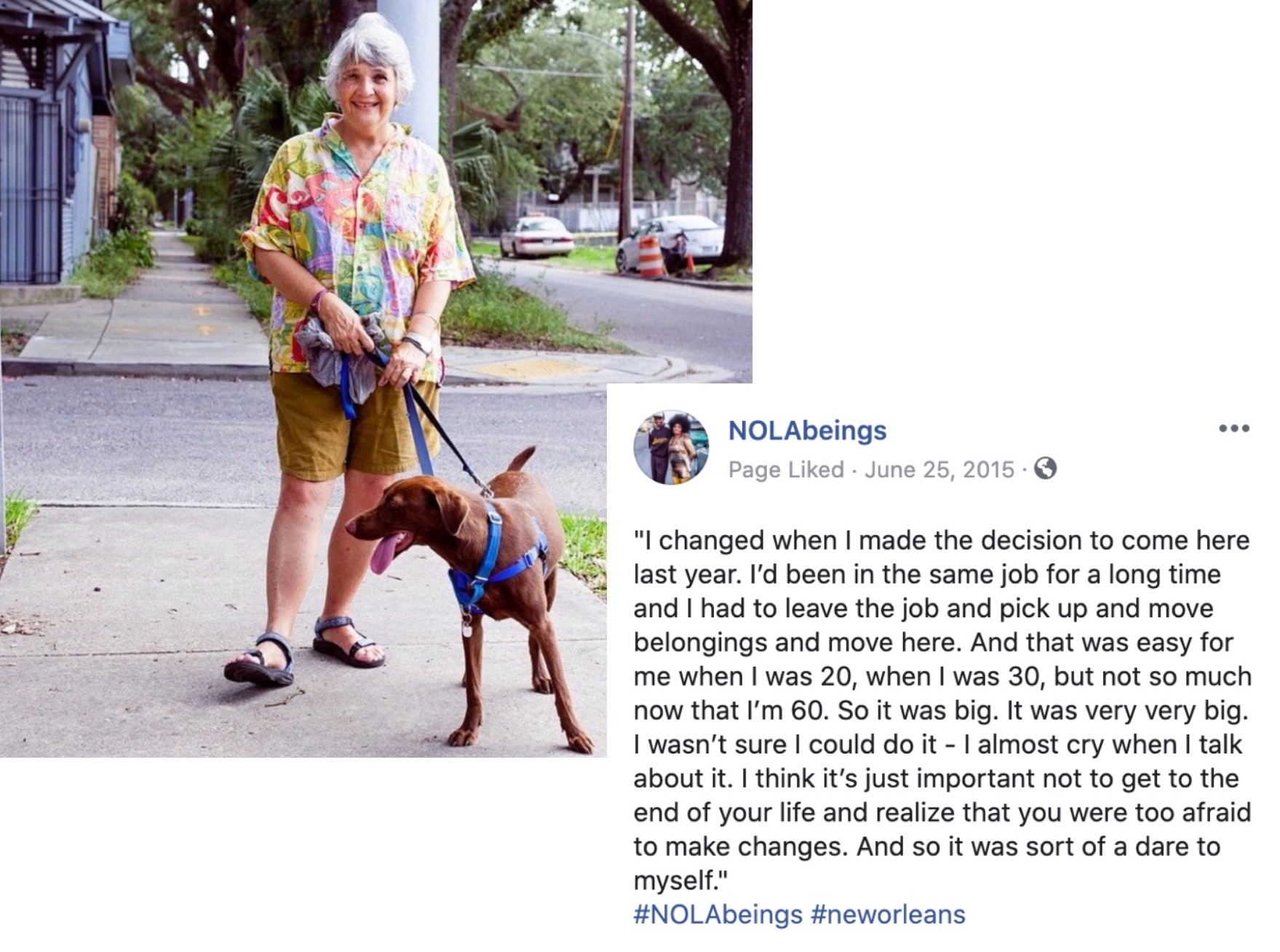 Georgeanne pictured posing for Claire, a stranger at the time.

With her feet planted in a playful manner, lightly perched above the sidewalk, her hair blows in the wind, brushing over her forehead. Her eyes appear to be smiling just as softly as her gentle grin, as she stands wearing a brightly-colored button down shirt, that just so happens to match her joyous aura.

This is Georgeanne and in this moment, she hadn’t the slightest clue of what would come from this photo.

“NOLABeings has been this practice of walking up to strangers on the street,” freelance photographer and NOLABeings founder Claire Bangser shares. Working to unravel the humanity and stories that rest in the souls of New Orleans’ population, Bangser brings a people-centric lens, both literally and metaphorically, to foster connectivity by amplifying voices hiding in plain sight.

“One of the things I love about living here is that I talk with strangers all the time, even when I’m at a bar or at the playground with my daughter,” Bangser says. “There’s always people willing to share real stories with each other and you can in this city.”

In just a matter of minutes, the charming spirit that exudes from what was previously a stranger to Bangser, stands behind the lens of her camera as a friend, an ally, and an inspiration. “Many people say, ‘Oh, I don’t have a story. I’m not interesting,’ but I say, ‘Oh, you just don’t realize that you’re interesting to other people,’” Bangser says, speaking to the beauty that manifests before her during these spontaneous conversations. And that is exactly the response Georgeanne had, a middle-aged woman who had just recently moved from out of state to New Orleans. 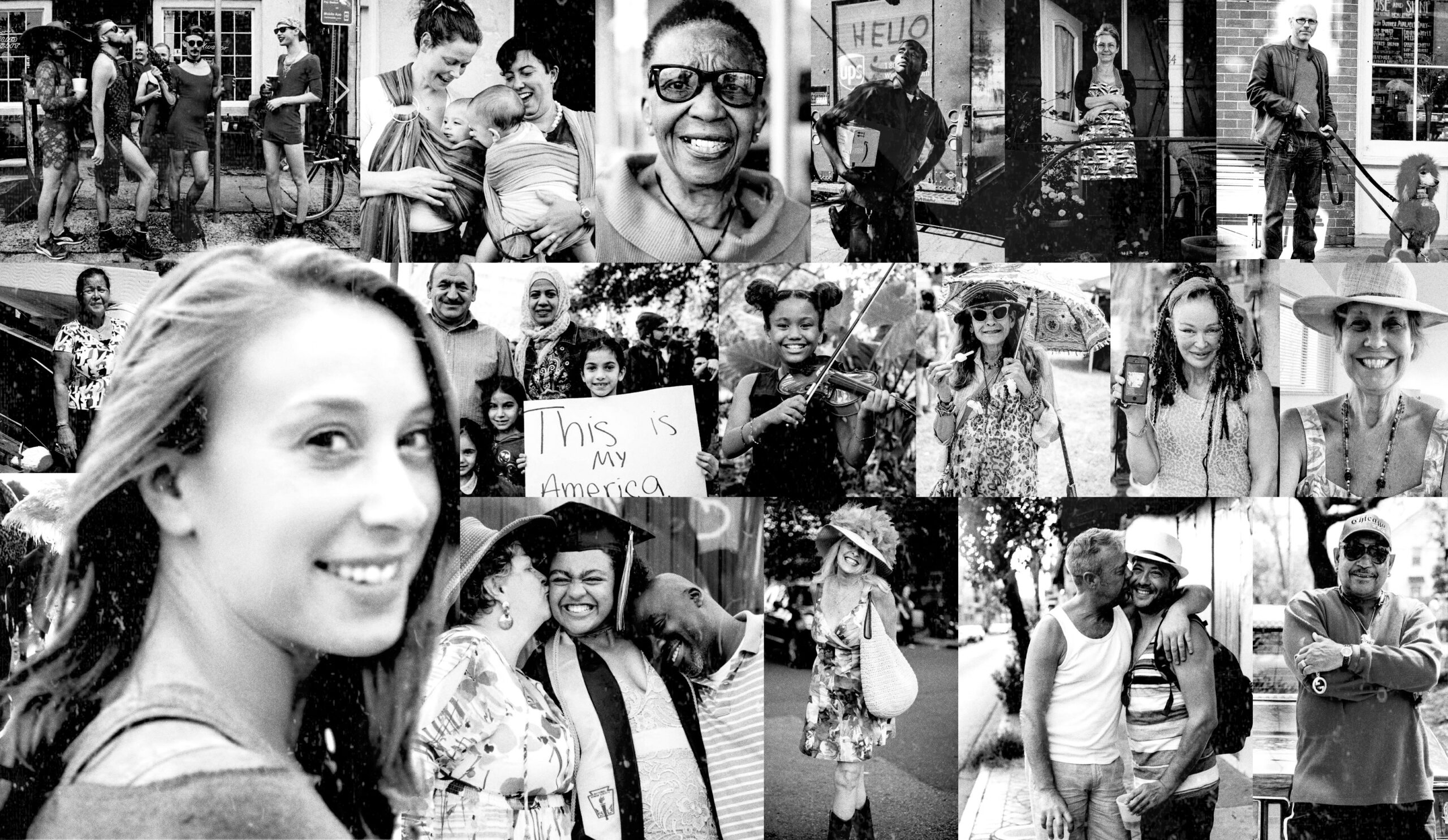 Claire Bangser (pictured on the bottom left) amplifies the voices of New Orleanians, fostering connectedness throughout the local community.

And, yet, little did Georgeanne know that this conversation with Claire, a stranger at the time, would result in a strong network of connections throughout the community, bursting with enthusiasm, welcoming her home as if they were long lost friends. All of which were friends that would soon become family.

After agreeing to an impromptu interview, Georgeanne, who like many, considered herself to be far from an interesting interview subject, she shared with Bangser that she had always wanted to move to New Orleans and would face painful regret if she let fear of change stand in her way. Packing up her life and moving to the city she had always dreamed of living in, Georgeanne had begun a new chapter, embodying an attitude to live in the now, as life is too damn short. 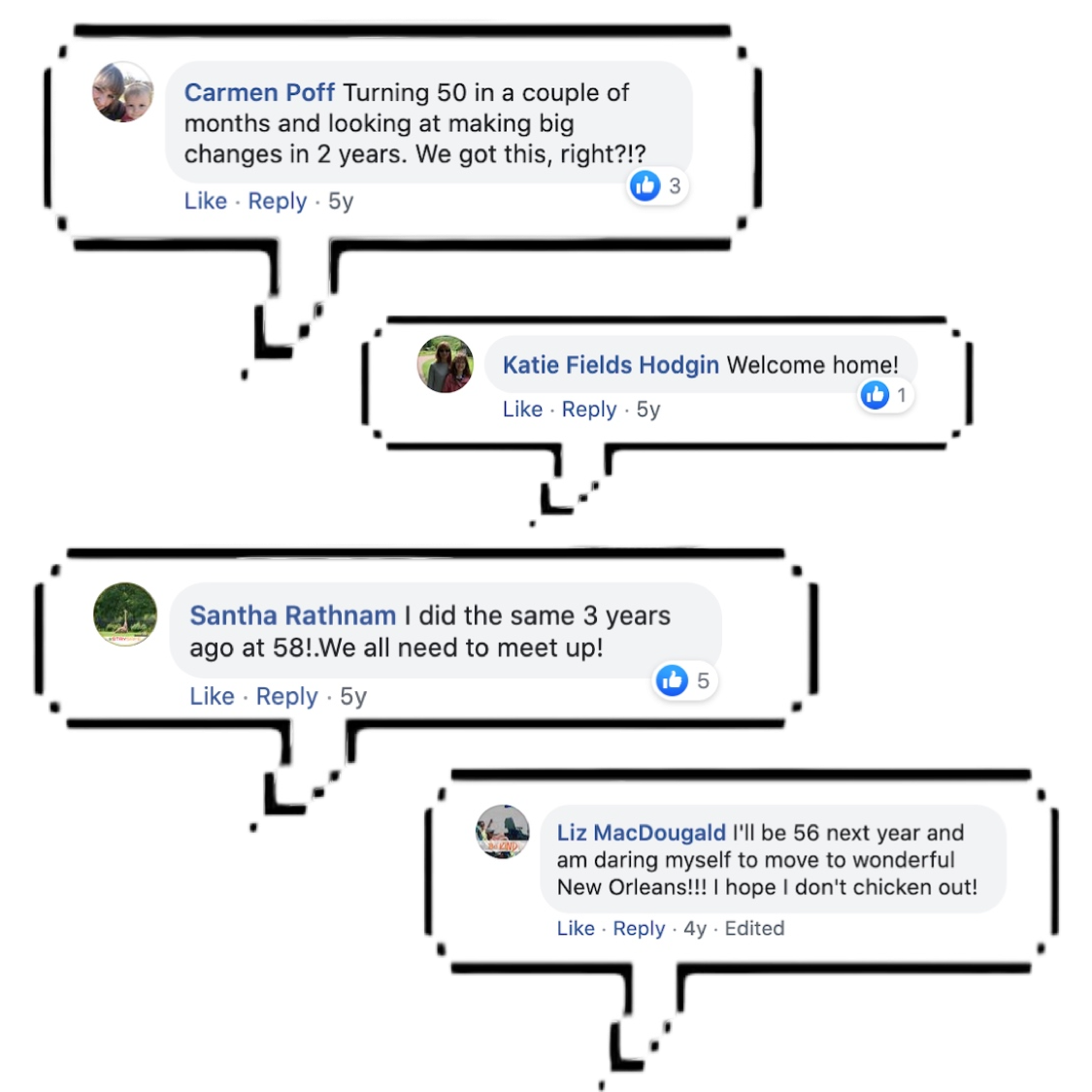 “When I quoted that and put it online, all these women who had similar experiences came out of the woodwork and started commenting,” Bangser says, gleaming with emotions of shock and satisfaction wrapped together and tied with a bow. “They were all like, ‘That’s my story!’”

Forming a group from the comments section of Bangser’s post of Georgeanne, these women have since congregated. “They sent me a picture of them all having lunch,” Bangser shares, revealing the potent power of her storytelling, and its ability to sanction connectivity.

Bangser’s creativity doesn’t just produce photographs, it produces families. When Georgeanne’s family suffered from her loss, two years ago, they expressed sincere gratitude towards NOLABeings. While Georgeanne departed from this earth all too soon, this single NOLABeings Facebook post facilitated three years of an all-embracing friendship. 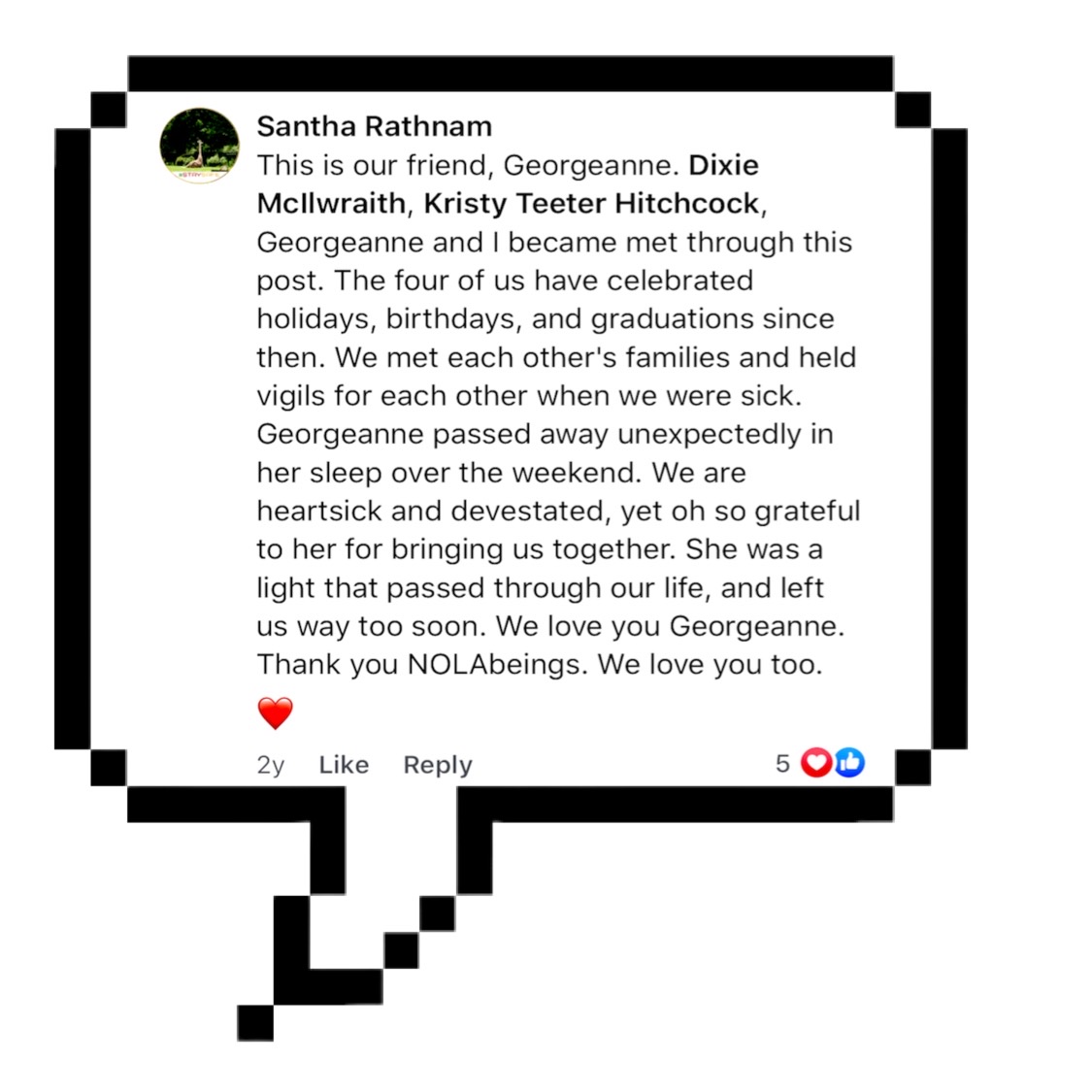 Expressing her gratitude towards NOLABeings, Georgeanne’s dear friend, Santha, commented on the post; the same post that brought her and Georgeanne together.

Understanding social media to be her niche to give back to the community and amplify the stories of strangers, Bangser’s work as a creative in this city nurtures a bidirectional relationship — she gives to the community and they give to her. Had she not gone out on a whim, approaching Georgeanne and unleashed her story, maximizing her platform as an artist to disperse its wonder, this group of women would likely never have otherwise crossed paths, but they did.

Bangser doesn’t give a voice to anyone; she turns up the volume of the voice that stands before her, connecting with strangers in a way that allows any and all foreign souls within the city to do the same. In the absence of these noble strangers, her work wouldn’t be feasible. As Bangser so eloquently says, “Everyone is connected and intertwined and none of this work exists in a vacuum. I depend on the world being here to do my work. ” In fact, these people —  the New Orleans community — are the precursor to Bangser’s visual storytelling. Acting like ink to a page, the vulnerability and courage brought by community members sharing their intimate stories make her work real; they make her work visible.

Georgeanne’s photo, still to this day, continues to receive comments, even facilitating the establishment of a “Gray Ladies” club. It is community members, like those in the “Gray Ladies,” that arm Bangser with the tools and knowledge to be the visual storyteller that she is. So, while Georgeanne may no longer appear walking through the city, sporting vibrant beach shirts and Tevas, alongside her chocolate lab, she will forever appear in our hearts, reminding us of the power vested in strangers. From the “click” of a camera to a built community, Claire Bangser reminds us all that you simply don’t know how interesting someone’s story is until you ask.