In every generation, there are musical artists that become household names. This includes iconic artists such as The Beatles, The Beach Boys, and Elton John.  For Millennials, as well as Generation X, perhaps the most common household artist’s name, is Harry Styles.

Styles first rose to fame as a competitor on the X-Factor, a British singing competition. After being voted off by judges, he was invited back to perform as part of a group, which became known as One Direction. They became a worldwide phenomenon. People said they were “bigger than The Beatles” (Owoseje), and Styles was always at the forefront of much of the love, and the criticism. He became the unofficial “leader” of the band, and was the glue holding them together. Eventually, One Direction broke up, but that was not the end of the boys’ music careers. All five boys went on to have incredibly successful solo careers, with Styles coming out ahead. 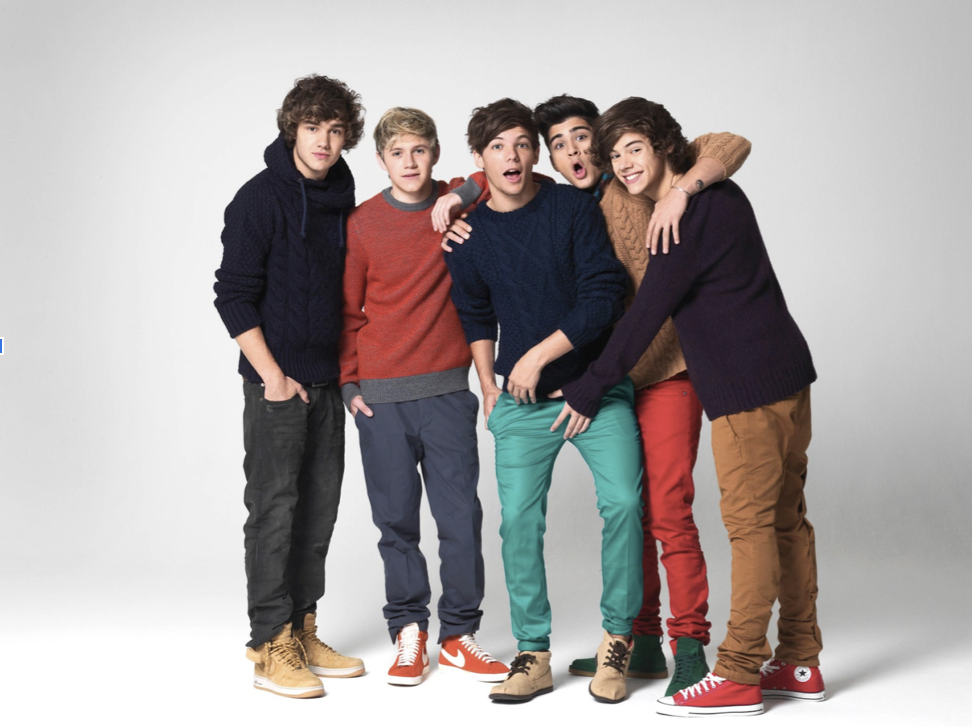 His first, self titled album, while popular, did not garner nearly half the attention of his most recent album Fine Line.  People attribute its success to the unique songs and their meaning, as well as their accompanying art work and music videos. People believe this album was Styles’ “coming out,” sexually and musically. Styles has finally found his voice, independent of One Direction.

Styles made conscious decisions when choosing the sounds to incorporate into this album. He went in a direction different from anything he has done before. None of the songs on Fine Line include the bubble gum pop from his One Direction days, nor the mournful tracks from his album Harry Styles. Fine Line took a completely different approach. The first and last four songs on the 12 track album produce feelings of happiness. They include upbeat snare drums and electric guitars, precise symbol crashes, and Styles himself providing a series of light “Ha’s” and “oos” in the back of the tracks to complete the sounds. The middle 4 tracks, however, are somber and slower than the rest of the album. This catches the listener by surprise after the first 4 uplifting songs. It makes the listener step back and wonder what caused the contrast. These middle tracks include slow piano melodies, acoustic guitar, and steady drums. Rather than Styles’ chipper background vocals, he instead fermatas many notes in these songs for emphasis, and includes eerie vocals of a woman laughing. Elongated pauses highlight serious lyrics that are present in these tracks.

The decision to have the “bookends” of his album be positive is a conscious one. This album was meant to be listened to from start to finish to elicit the wave of emotions Styles intended. It draws listeners in with the feel good tracks of songs such as “Watermelon Sugar.” Then, because they are hooked, listeners stay to hear about lost love in “Cherry,” and as you begin to worry about Styles, you are again uplifted with optimistic tracks including “Sunflower, Volume 6.”

The lyrics Styles has chosen are cherry picked (no pun intended) to fit with the feeling and sounds he wants associated with the songs. A line that is repeated in several tracks is the discussion of a “fine line” which is a metaphorical line Styles teeters on the edge of with love interests. Once he passes this line, he loses them. This line is accompanied by sad acoustic guitars and a pained fermata at the end of “line.” These sounds paired with the lyrics make the listener understand the pain Styles felt while teetering on this “fine line.”

Styles album also gives his listeners a sense of hope for love, which is why he begins and ends his album with positive tracks, so you begin and end on a positive note. Styles’ lines in these positive tracks  include “you’re so golden” from the track “Golden,” in which he tells a girl she is beautiful. 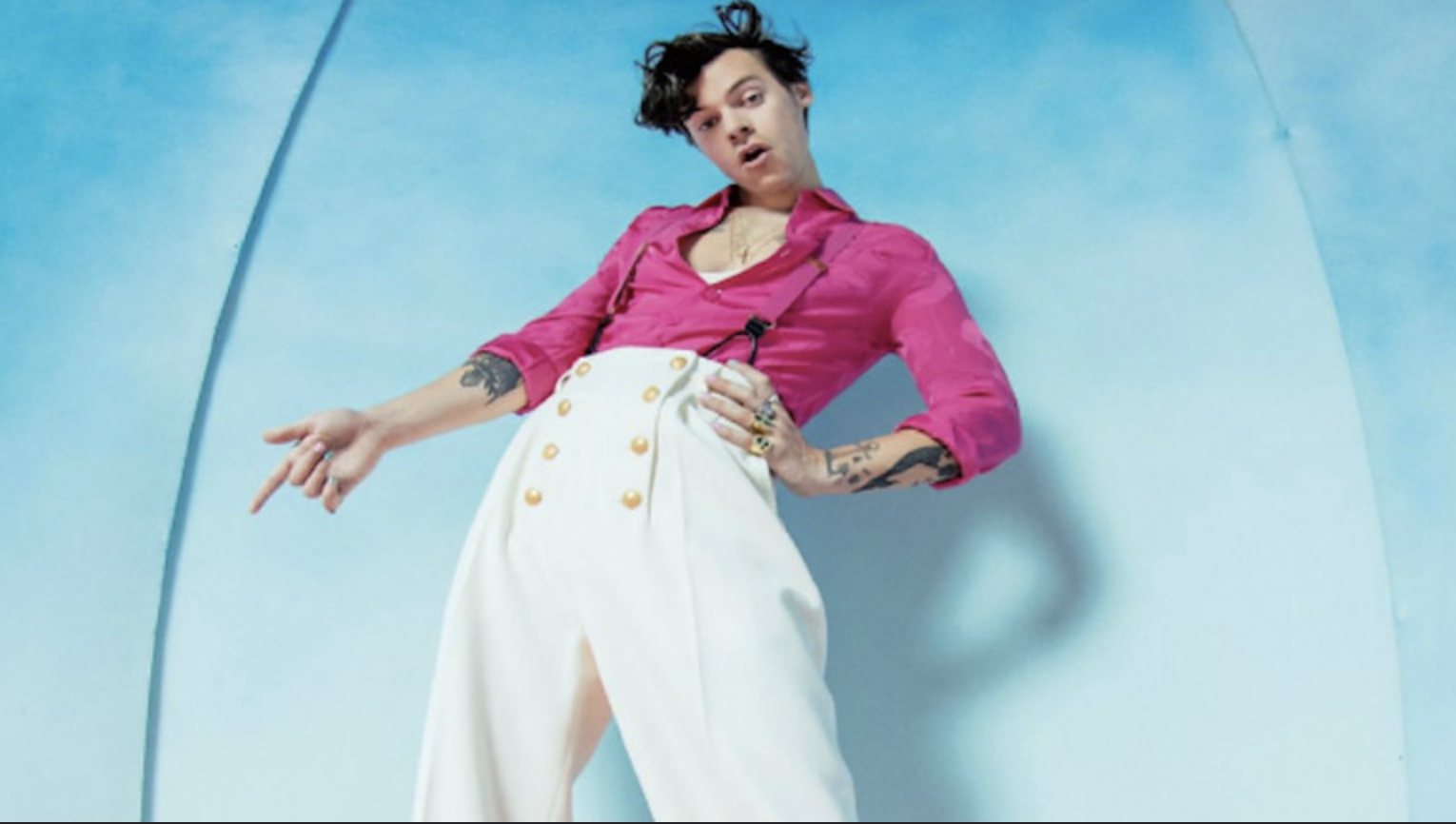 This track is accompanied by quick piano melodies and snare drums, reminiscent of something you might hear while dancing on a beach. Another line “and I keep thinking back to the time under the canyon moon,” found on the track “Canyon Moon,” alludes to Styles’ happy memories of a failed relationship. The track is rounded out by soothing background vocals and fast paced electric guitars. Styles’ positive lyrics accompanied by whimsical, bright instrumentals support his messages. During the positive songs, you can hear Styles smiling through his worlds. The lyrics themselves and their association with positive sounds gives the listener hope for love, both before and after he dives into the “uglier” sides of his failed relationships.

For people who were fans of Styles during his One Direction days, Fine Line is a complete 180. Styles showcases his voice and personal experiences more than ever before, while also creating space for an audience who never gave him the time of day before. Fans of One Direction were notorious for being “crazed fangirls,” Young teenagers who would camp out outside hotels One Direction stayed in (Simon). Today, loyal fans from the One Direction days are now all in their 20s, which opens the door for more mature music and themes. Styles took advantage of this.  Styles, in particular, opened the door to an entirely new fanbase for whom One Direction wasn’t their cup of tea, People in the LGBTQ community.

Styles’ album expands his musical career while breaking walls many people thought weren’t possible for someone who was in a boy band. Through this album, Styles embraces his sexuality, (which remains unlabeled), something he was never encouraged to do before. In Johns D’Emilio’s “Capitalism and Gay Identity” he discusses the false notion that follows the queer commuity. The notion that if everyone in the LGBTQ community came out, “gay oppression would end.” Styles and D’Emilio reject this notion. Coming out culture instilled into so many of our psyches is harmful to people who don’t know where they fall in the LGBTQ community. The speculation from fans surrounding Styles’ decision to remain unlabeled, shows just how harmful this “over reliance on coming out” is. When people can’t fit someone into a box, it makes them uncomfortable. But that doesn’t make it wrong.

Styles’ freedom from the confines of his boy band allowed him to create art including both female and male love interests, including the music video for “Watermelon Sugar.” In the video, men and women roll around together sensually eating watermelon. Styles also broke boundaries through his clothing that appears on the album cover and in photo shoots. Pictures include him posing naked, and in a pink tutu. 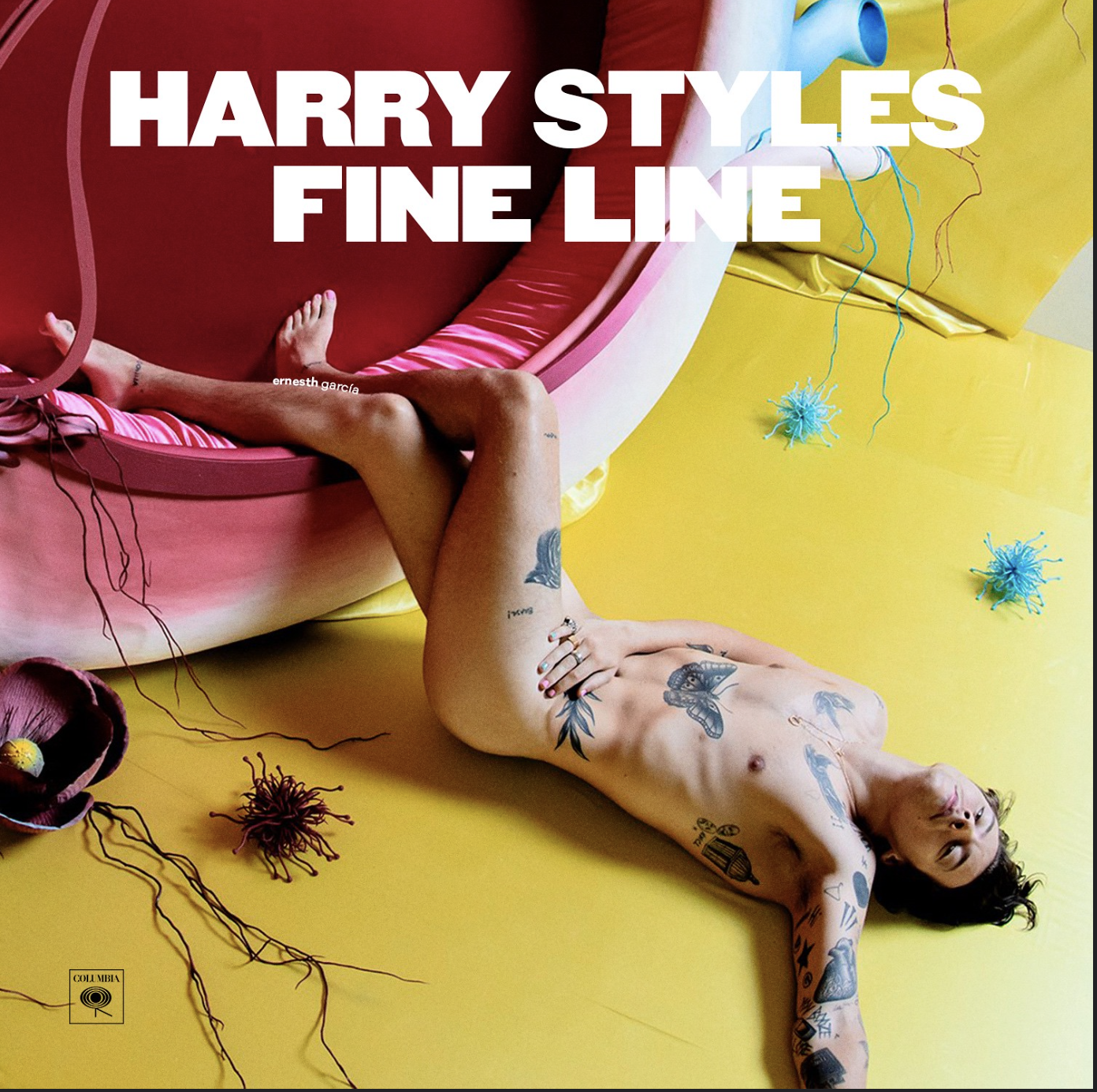 His gender ambiguous clothing and sexually fluid music videos have opened a space for people who have never seen such a dramatic shift from a male artist. Although Styles does not label his sexuality, he has stated he is not hiding anything. “Its just- who cares?” he says when discussing his sexuality in an interview (Moniusko.) This refusal to label himself creates a space for queer youth who are uncomfortable labeling their sexuality. Styles proved that you can just be you, no labels required, and that is enough.

Styles’ album made waves in many communities. He proved someone can change and grow, both as a person and an artist. As a musician, there is a pressure to conform people’s expectations of what you sing and how you perform. Styles evolving musically, and sexually, gives a voice to queer youth everywhere that are questioning themselves. He has defied the odds and come out with a completely new image and sound. Rather than being afraid of this change, Styles had faith in himself that he would succeed. Today, with rights threatening to be stripped away from the LGBTQ community, Styles has given queer youth a place to be themselves without fear: within his music. D’Emilio said that “[LGBTQ identifying people are] already excluded from families…we have..to create…networks of support that do not depend on the bonds of blood.” D’Emilio would agree that Styles has done that with Fine Line. He created a safe space for queer youth, where they only need to be themselves. This is, perhaps, a bigger accomplishment than the album itself.