On Friday, May 22nd, British band The 1975 released their latest album, Notes on a Conditional Form. The 21-song album covers a variety of topics and musical genres that are both a reflection of the lead singer Matty Healy’s inner voice and also the state of humanity as a whole. It has been a long anticipated album since they teased its release as a sister album to their previous 2018 work, A Brief Inquiry into Online Relationships. The album is a rollercoaster of emotions that has already become very polarizing in terms of the critical reviews it has received. As a body of work, the album could be more concise and cohesive; its rambling nature to some seems less intentional and more like careless editing. However, I believe there are moments in Notes that prove it as the most obvious progression for the band as musicians and as a brand. 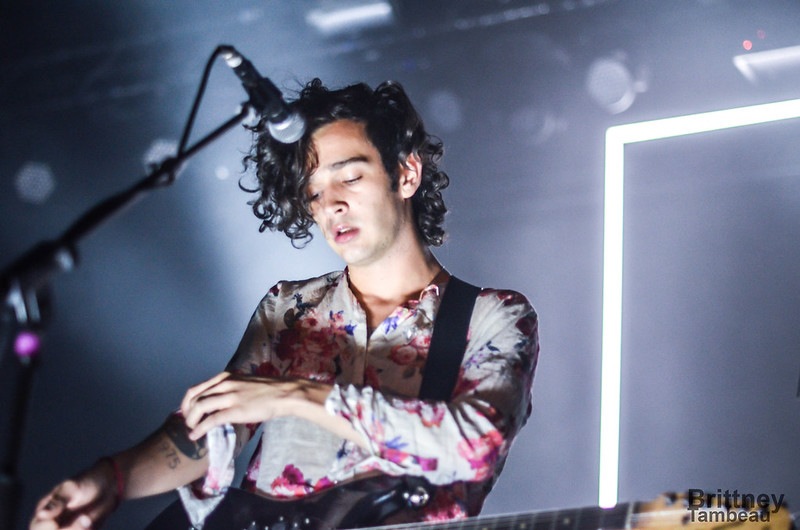 Matty Healy performing with The 1975 at Royale Nightclub in Boston, 2014.
credit: Brittney A Tambeau

The 1975 is an indie band that has teetered on the edge of the pop-rock genre for some time now. They combine the rebellious, question authority attitude of rock with an attention to songwriting and high production value likened to pop. They are also known for layering both traditional four-piece band instrumentation with synthetic electronic sound. George Daniel, the band’s drummer, is their head producer and mixer, whereas frontman Matty Healy is the singular lyrical voice of the entire operation. Their first album, self-titled The 1975, earned them a spot on the map with their memorable black and white aesthetic and self aware yet youthful breakout hits, aptly named “Sex,” “Girls,” and “Chocolate” (a metaphor for marijuana). My personal favorite, “Robbers,” is a conceptual Bonnie and Clyde story influenced by the 1993 movie True Romance. Their albums since self-titled have shown a progression towards maturity, both in the lyrical content and in the mastery of broader music styles. Notes is proof of this, taking every possible chance to show what they can do production wise, as well as a charismatic Matty waning between self-reflection and social commentary.

Each album in their repertoire has started with the same titular track, “The 1975,” lyrically identical but each with a unique production style that fits the overall vibe of that specific album. But Notes subverts this prologue of their own creation, surprising fans with a call to action speech from climate activist Greta Thunberg in place of the familiar opening lyrics. This bait and switch immediately sets the tone for this album: they are going to break the rules, both of their own construction, and of the larger industry regarding what an album should be.

After the words of inspiration from Greta’s lilting voice, the second track, “People,” nearly gives you a heart attack. The drums and electric guitar come at you at full force (and volume) while Matty screeches, “WAKE UP! WAKE UP! WAKE UP! It’s Monday morning and we’ve only got a thousand of them left.” Both its lyrics and sound serve as a literal wake up call, trying to snap young people out of their apathetic and hopeless state. At the time he wrote the lyric, “I don’t like going outside so bring me everything here,” Matty couldn’t have predicted it would gain new meaning in a COVID-19 world. What began as a satirical reference to our addiction to convenience, a growing culture of Postmating and two-day shipping, is now encouraged by the CDC. Matty acknowledges that the exacerbation of current social issues as a result of coronavirus has made the themes in Notes more resonant. He explained to Vulture that in hindsight, they did have an “eerie feeling” while making the album that it “was leading up to something.” They can’t predict the future, but they can predict what music you will want to listen to when it happens. 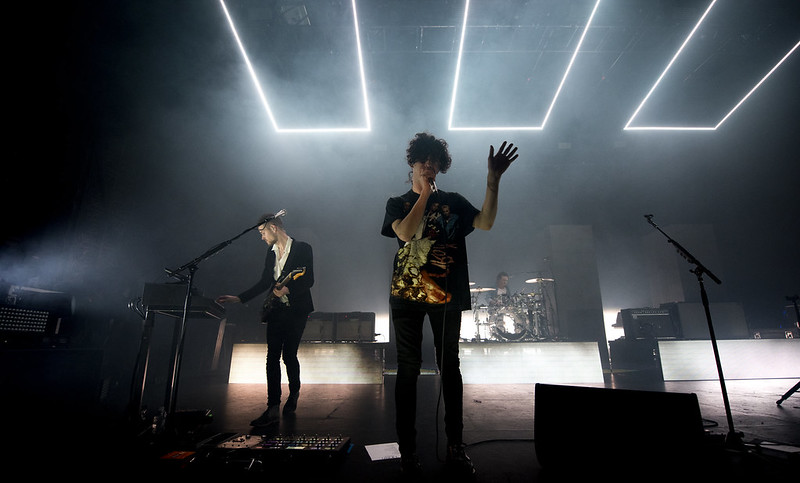 Also existent in the album are themes directly from Matty’s personal life, including codependency, loneliness, and past struggles with addiction. In the frantic track “Frail State of Mind,” Matty describes his feelings of social anxiety and mental unrest which led him to using heroin and pain pills as a means of suppression. He sought recovery at a rehab facility in 2017 after his bandmates gave him an ultimatum. This intervention is alluded to at the end of the song with the lyrics, “You know we’ll leave if you keep lying/stop lying behind your frail state of mind.” He has claimed that if it weren’t for his bandmates/closest friends, he would have died.  Their bond is so strong, in fact, Matty wrote the closing track on the album, “Guys,” dedicated to George, Adam, and Ross, reminiscing on the time they shared a small apartment together when they were just “starting out”. It’s refreshing that this platonic love song is the closest thing to a love song on the entire album. They disregard hypermasculinity and celebrate the endurance of their relationship.

My personal top picks from the album also happen to perfectly represent the explorative genre hopping that occurs throughout this piece but through a smaller scope. The breakup song, “Tonight (I Wish I Was Your Boy),” is an R&B inspired jam that utilizes samples from The Temptations’ “Just My Imagination (Running Away With Me).” You hear a passive yearning in Matty’s voice when he sings the chorus, “Tonight I wish I was your boy/ tonight I think I fucked it royally.” He is not necessarily declaring he wants his lover back; he is instead having a moment of regret that will probably be gone by the morning. Another favorite of mine, “Shiny Collarbone,” is mostly an instrumental track, which The 1975 is no stranger to. The sound features a thrilling and entrancing club beat with intermittent hype vocals from Jamaican Dancehall musician Cutty Ranks. The title implies the glistening of sweat on the bodies of party goers dancing to this track. Or maybe it is a reference to the re-emergence of Twilight in the pop atmosphere and the searing visual of Edward Cullen’s reflective vampire body. Another standout is “If You’re Too Shy (Let Me Know),” which begins with the musings of an orchestra warming up but then swiftly transitions into a sparkling 80s inspired hit, finally a more familiar sound from their previous work. “If You’re Too Shy” explores how lust and sexuality manifests in online relationships. Steamy lyrics like “I’ve been wearing nothing everytime I call you” are sung over a slightly distorted guitar sound, synth keys, and completed with an obligatory saxophone solo.

According to Robin James, musical melancholia is what encompasses a record that is “bored and dull,” in which even the instrumentation lacks climax or crescendo (James, Resilience & Melancholy). The 1975’s Notes on a Conditional Form is not only the antithesis of melancholia, it is mania. With emotional ups and downs and sonic shapeshifting that spans an hour and twenty minutes, there is never an ounce of affectational apathy or any attempt at understatement. But The 1975 also rejects any “resilience” narrative that forces a “before and after” artistic approach to trauma recovery (James). Though some might criticize the lengthiness as an overindulgence, the road to progress, both personal and social, is a long one. Notes dares you to feel every feeling and accept every triumph and failure as they come. The 1975 know what they’re doing.