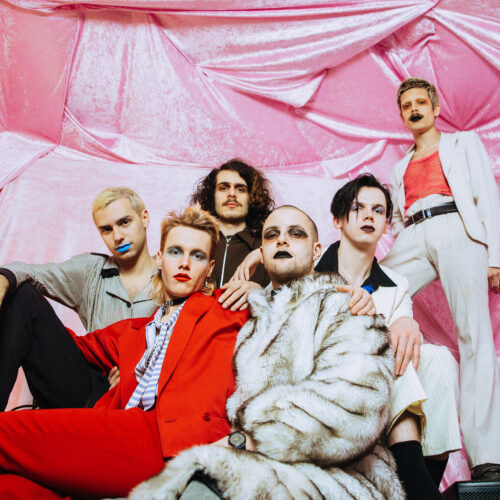 The future of the London-based alternative band, HMLTD, looked grim after splitting from Sony for “creative differences” (Bassett 2019.) Lucky enough, the band signed with indie label Lucky Number, where they were able to create West of Eden. The album needs to be listened to in chronological order to be truly understood and appreciated as it tells a variety of stories. HMLTD creates an alternative narrative for patriarchal society highlighting their eccentricity through their image and music. The album scarcely incorporates mainstream music, consisting of boundary breaking ballads of anguish, critiquing capitalism, androcentrism, and heteronormative culture as a whole.

The experimental band mixes smooth jazz with electronic beats in “MMXX A.D.,” predicting the chaos of 2020 as the “Soviet Hangover” and “the desolate main street” foreshadowing the mess that came with the upcoming election and the current pandemic. The instrumental “The Ballad of Calamity James” includes guitar plucking and strumming combination mixed with chants, whistles and powerful drumbeats, creating a calming acoustic prelude to their famous 2017 single “To the Door.” The variety in sound across the album shows the talent and effort HMLTD puts into their music not only lyrically, but musically as well. Eerie goth-rock tracks like “The West is Dead” and “Death Drive” prove unsettling to a listener who may be inclined to enjoy the pop sounds of “Mickey’s Song,” a techno homage to 80s musical archetypes, and “Nobody Stays in Love”, a pop rock anthem for the broken hearted about the ephemeral nature of relationships. These popular sounds resonate with a similar fan base drawn to the pop song “Violent” by the Grapetooth duo, who also uses nostalgic techno tones, but HMLTD sets the bar much higher than Grapetooth through their versatility of sounds in West of Eden.

For this current generation consumed in mind-numbing rap and pop songs, HMLTD encourages listeners to be cognitively engaged with their music. The album combines genres, using a multitude of dissonant sounds particularly in “Satan, Luella, and I.” The uncanny sounds throughout the intro, verses, and pre-chorus, mixed with the chaos of the chorus and bridge flow effortlessly together, creating an interesting song to experience. “Satan, Luella, and I” and “149” together tell the story of domestic violence and the twisted reality of being in love with your abuser. Spychalski sings in “149”, “Helsinki Syndrome, it creeps up on you.”  Tallulah Eden, the angelic voice of Luella, sings about growing fond of her abuser and repulsed by help. In “149” Spychalski has intense, harsh music played against his frantic, desperate voice, juxtaposed with Eden’s soft vocals with light piano. Aggressive music and vocals of the protagonist are in tandem with his abusive nature, while Luella’s innocent vocals match her naïve, pure disposition that permits her abuse. The interconnectedness of the album is intriguing, telling stories of struggle, not only through their lyrics and music but with their visual representation as well.

The band’s theatrics come to life through their eccentric image and presentation of absurd and attention-grabbing visuals. “Why?” – a song completely in Mandarin – sends a powerful message accompanied by an animated music video. Three monsters destroy an entire city with one match, setting everything aflame, leaving it in ruins. A girl, devastated by the disaster, cries, but her tears lift her out of the city to the three monsters. Her devotion to her city dissolves the monsters, but not before one says, “Oh there’s always one.” One match and a couple monsters causing mass destruction contrasted with the girl savior sends a message of hope for youth to change the future of modern society. “The West is Dead” music video in relation to the lyrics, serves to further the notion that greed is sending the earth and humanity into a slow death through the visual representation of a dying ecological state. Images of slavery, martyrs, matadors, and industrialization play across the screen, critiquing capitalism and its unsustainability. “CEO’s hang themselves by their neckties” hints at the global economy entering a downward spiral from greed and self-centered decisions. Although the song seems depressed and pessimistic, the band remains hopeful for change, stating that “the apocalypse will be so compassionate.”

West of Eden takes issue with capitalistic societies, channeling their despair into music. Ann Cvetkovich’s Depression: A Public Feeling encourages exactly that, using political anguish as a driving force for activism and manifesting societal corruption. The punk rock band shows their versatility in the album, creating alternative tracks like “The West is Dead,” and “Death Drive” are vitriolic of American greed and institutionalized marginalization. “Death Drive” depicts American society asking, “who put the soul on auto drive?” hinting at the lack of humanity in conventional American political agendas. In “Satan, Luella, and I” Spychalski sings “Not every filth is art – Not every system’s safe – Not every generation’s doomed to despair” allowing the listener to interpret the meaning for themselves. The current protests against police brutality prove the corrupt systems in government, but also societal change that the youth and protestors demonstrate as they fight for equity. Not every generation will repeat the errors of the previous. HMLTD’s political depression centers around capitalism but also the patriarchal, heterosexist society. The band uses their music as outlet to express their anguish over the societal condemnation of eccentric identities.

The lead singer Henry Spychalski said in an interview with National Music Express that the band’s main goal is to create “an alternative version of masculinity – a kinder, more creative, less violent one” (Bassett 2019). External pressure to fit in with heterosexist society creates an internal struggle exemplified in the song “Joana.” Joana personifies the eccentric attributes of Spychalski, which the general public encourages him to suppress. Joana gets mauled by a group of young boys, and she “never was the same.” No matter how much the singer tries to repress Joana, she remains an ever-present aspect of his character. The following song “Where’s Joana” solidifies this; while everyone is looking for the personality of Joana, he claims at the end of the song “I’m Joana”, showing his acceptance of her. Joana tells the story of personal struggle, showing the aberrant characteristics of yourself and the hate received from being perceived by others as strange. HMLTD is anything but standard, always showing their theatrically peculiar style, but Joana demonstrates the battle of remaining true to yourself while faced with a cruel and unimaginative world.

Cathy Cohen writes in “Punk, Bulldaggers, and Welfare Queens: The Radical Potential of Queer Politics?” how she wants to change the idea that all heterosexuals are hegemonic and controlling while queers are invisible and marginalized. Normalizing tendencies of dominating, stable, and structured behaviors disempowers unconventional queer identities. Like Cohen, HMLTD raises the idea that eccentric behaviors have a place in society and should not be shunned but respected. The band members consistently wear androgynous outfits, colorful hair and dramatic makeup, pushing the boundaries of masculinity. The band confronts socially conditioned behaviors by exaggerating and emphasizing eccentricity, illustrated in their untraditional music and image.

To sonically communicate the issue of a capitalistic and heterosexist society, The West of Eden uses inharmonious sounds and unsettling chords and tones, enabling active listeners. The album deals with a large degree of issues such as domestic violence, queer-phobia, greed, but also positive change and hope. Mainstream pop folks may not enjoy the band’s articulate lyrics and dissonant sounds that majority the of the songs entail, but there’s a couple catchy pop rock songs in the mix just for them. This album covered in hidden messages with a variety of sounds ultimately is a treat to listen to, but definitely an acquired taste. HMLTD addresses socio-political, cultural and personal struggles, through synthesizing a multitude of genres from techno to goth rock, leaving listeners in awe. West of Eden emerges a heretic masterpiece explaining how the band views the declining state of the world, but Spychalski closes the album telling us not to worry, “-it’s fine cause all we ever want and ever were is lost in time.”