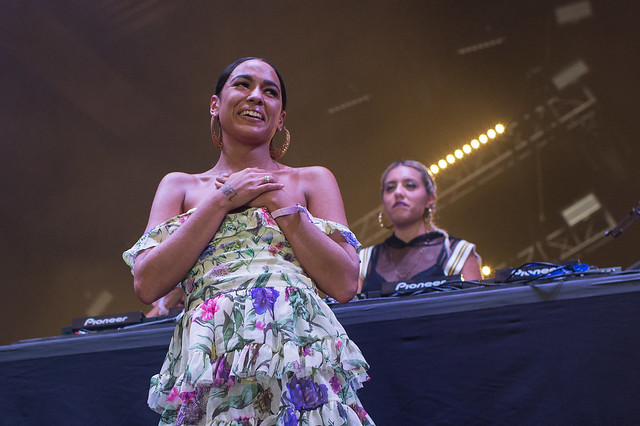 Destiny Frasqueri, better known as Princess Nokia, is a true jack-of-all-trades in the entertainment industry. As a bisexual, gender non-conforming actress, rapper, poet, hip-hopper, songwriter, and overall sonic experimenter who grew up on the Lower East Side of NYC, Nokia defies the idea that an entertainer must commit to just one sound or story. Similarly, Nokia’s most recent duel album Everything Sucks/Everything is Beautiful acts as a bold statement of personal duality in an environment where contradictions are discouraged in the name of preserving whatever the popular brand is. She deconstructs the binary that a black woman in music has to be labeled as either sexual and assertive or delicate and feminine. With a soft, angelic voice accompanying what she describes in a 2017 Genius interview as “divine feminine energy” and “je ne sais quoi,” she lives up to her royal title. Yet, her boisterous rap lyrics and unapologetic attitude offers a direct contradiction to this, where listeners are given both sides with the duel album. She effectively asserts the fact that she is not just one stereotype in a time where showing that people can and do belong to different identities is a vital first step towards ending prejudice and judgement.

In Everything Sucks, Nokia utilizes some of the same electronic keyboard and synthesizer sounds that are found on her previous breakthrough rap/hip-hop 2017 album, 1992: Deluxe. Her opening track “Harley Quinn” also seems lyrically reminiscent of her older single “Tomboy” as she slices through harsh electronic drum beats to shout, “Who dat? Who dat? Who dat? The bitch is back!” However, the difference in Everything Sucks is the incorporation of the famous Roland TR-808 Rhythm Composer in songs like “Balenciaga,” “Gross,” “Welcome to the Circus,” “I Like Him,” and “Fee Fi Foe.” These deep vibrations from the 808–an instrument vital to the world of hip hop–coupled with swaggering pop culture comparisons like “No 50 cent, but I got the power” and “Jackie Joyner-Kersee, damn, I run the limit” immortalizes Frasqueri as the badass gangster princess that she is known to be. The production on the songs in Everything Sucks is also arguably the most complex of all her music. Not only do we hear the 808 for the first time from Nokia, but we hear the incorporation of claps in songs like “Gross,” “Balenciaga,” and “Woes;” a recorder in “Fee Fi Foe;” a sample from New York DJ and producer Powers Pleasant at the start of “I Like Him;” and creepily distorted voices in “Welcome to the Circus.” Although critics like to argue Everything is Beautiful is better than Everything Sucks because of its polished sound, I think that Everything Sucks is equally important because of the innovative way in which she uses a group of such iconic beats. This is what helps establish her as a prominent and knowledgeable female figure in hip hop today.

If the first nine songs in Everything Sucks are bludgeoning and ferocious attacks, Princess Nokia’s last track “Just a Kid” is a vulnerable explanation as to how she came to be this way. By the end of this piece, it becomes obvious to me how Princess Nokia’s work truly fits into Ann Cvetkovich’s notion of trauma. She raps about spending her early years in foster care and suffering physical abuse from her grandmother whom she moved in with after her mother died and her father became addicted to drugs. Cvetkovich writes that “Trauma is marked by forgetting and dissociation.” Nokia raps, “Disassociate and my thoughts go erased.” Additionally, Nokia’s duel album functions as what Cvetkovich calls an “archive of feelings” because it is both a repository of feelings and emotions and also a documentation of her healing process that goes beyond the confines of traditional medical therapy. We see this as she transitions into the more restorative Everything is Beautiful.

Princess Nokia’s Everything is Beautiful is a refreshing glass of sugar honey iced tea chasing the inescapable heat delivered by Everything Sucks. Taking over two years to finish and partially written while in Puerto Rico, it is obvious that this album is designed to integrate a grounded, holy energy into the mix. In the opening song “Green Eggs and Ham,” Nokia establishes the theme of finding sunlight through darkness as she lightly raps about Sunny D, toast, and jam even after she states matter-of-factly, “I remember when my granny used to hit me.” She continues this in “Wash & Sets” by ruminating about how “growing up sucks” while staying optimistic about her future and rapping over soothing synthesizer beats, “Got a blunt in my hand/Got some good in my heart/Got the stars in my eyes/Got some plans for this art.” The fourth track “Gemini” is my personal favorite for two reasons: it is unlike any other song Nokia has released and it is lyrically one of the most clever and autobiographical. For example, the collection of lo-fi electronic beats and drum patterns echo the rise and fall of waves against the Puerto Rican shoreline, and witty lyrics seamlessly converge as if the planets were aligning:  “I am Gemini, like Pac, André, Lauryn/And Kanye, Boy George, and Anne Frank.” The next track, “Wavy,” is a self affirmation and a salute to her original SoundCloud name, “Wavy Space.” The second half of Beautiful gives way to religious undertones with songs like “Soul Food y Adobo,” “Sunday Best” and “Blessings.” Out of these, “Sunday Best” catches the most attention with Nokia’s unusual use of non-synthesized sounds like electric guitar riffs and raw drum beats. The song is also significant in that it is the first time Nokia directly addresses her own Santerían religion. It becomes clear that it played a role in her healing in rap lines like, “It’s a full moon and I’m praying back-to-back/Use my intuition, set my new intention/My future’s abundant, joyful, pleasant.” The line, “Put respect on the name/Iya, Nana, Bruja, best in the game” is trademark feminist Princess Nokia as she pays respect to female goddesses and alludes to her earlier song “Bruja” from 1992: Deluxe. Nokia even describes herself as a “fucking psychic and a witch” in a Genius interview; it is clear that goddesses and witches are constant motifs in her work. The self-deprecating “Heart” inspires listeners to also be honest with themselves, and the ambient track “I am Free” feels like a spiritual awakening, a moment of clarity and cleansing for Nokia. “The Conclusion” is uncharacteristically raw but it is the perfect emotional and spiritual knot that ties the duel album together.

As AIDS activist and singer-songwriter David Wojnarowic so accurately points out, “‘Each public disclosure of a private reality becomes something of a magnet that can attract others with a similar frame of reference.’” During this COVID-19 pandemic and Civil Rights movement–a combination that is now often being compared to the AIDS and human rights protests of the 1980’s–Princess Nokia’s dual album acts as a public diary entry. Whether she means to or not, her public disclosures help inspire listeners to reflect and inquire on their own realities, during a historic moment where introspection is undoubtedly necessary to create societal change. Everything is Beautiful/Everything Sucks holds this magnetism in its hands as its organic, soul-searching quality pulls listeners in, making it nearly impossible for them not to relate. Nokia’s work is brilliant and underrated in this way. Although an apparent god complex makes her come across occasionally inaccessible in some of her lyrics, she is also still a human experiencing and working through trauma in relatable ways, like worshipping, imagining her “happy place,” or simply smoking some weed. The emotional duality of Everything is Beautiful/Everything Sucks is what makes Princess Nokia a feminist hip-hopper in every sense of the word, as she refuses to be taken as either delicate or aggressive. She is everything in between: a perfect storm of multidimensional emotions, experiences, and traumas.

The Liberation of Fiona Apple’s ‘Fetch the Bolt Cutters’
Music