Jackie Venson and the lure of dystopia: Album review of Jackie the Robot, Vol. 1, 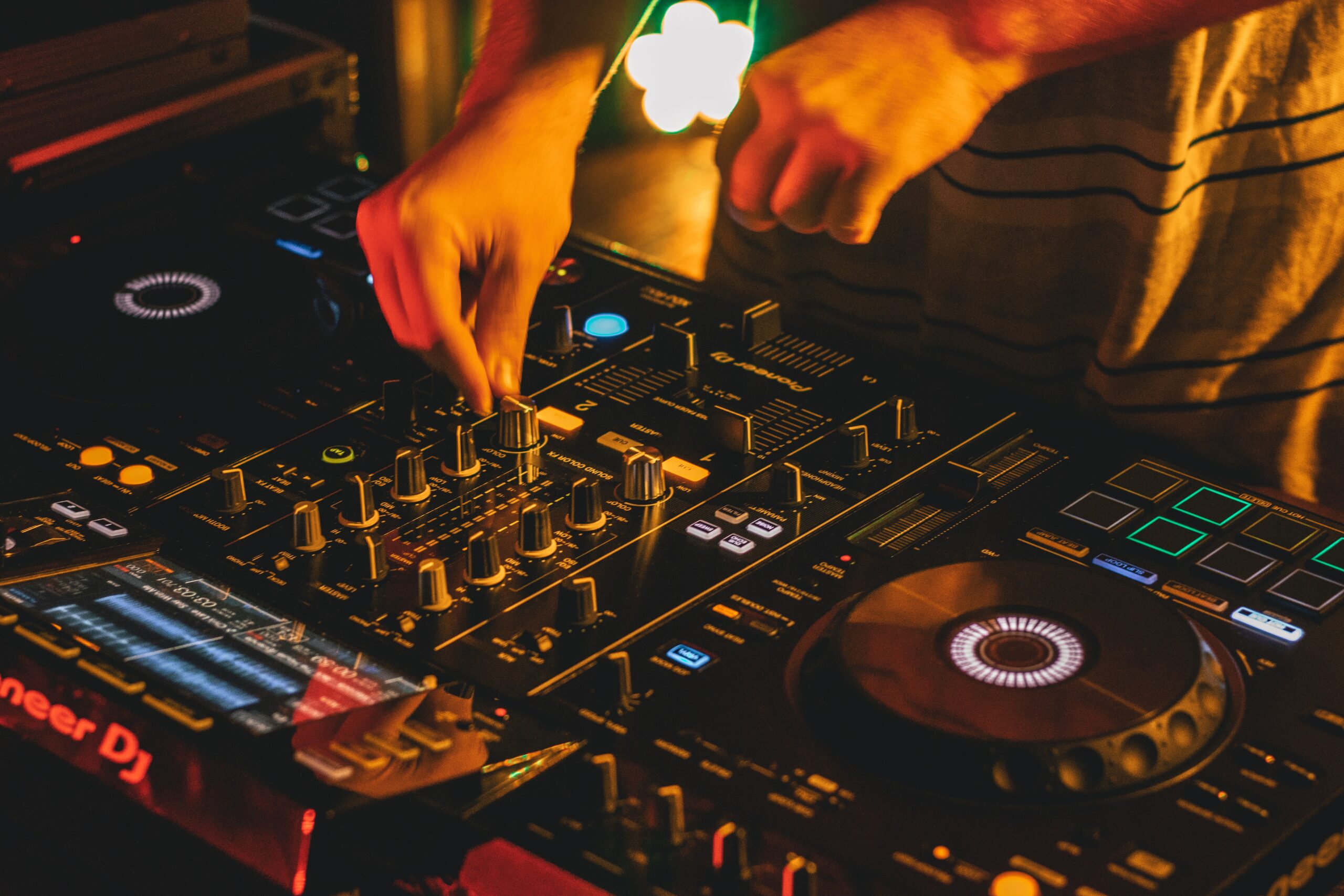 DJ Playing a Turntable (Photo by: Zac Bromell Via Unsplash)

The existential space lying between bliss and discombobulation can prove difficult to find for most artists beginning a foray into EDM. But Jackie Venson, a dynamo of the Austin music scene, makes crafting an addictive electronic earworm look like the simplest task in the world. From the first synth chime of her quarantine album, Jackie the Robot, Vol. 1, Venson takes the listener on a breathtaking, brisk journey through the storied land of computers and existentialism. With the roots of her career firmly ensconced in the fertile soil of blues, indie, and pop, the creation of a distinctly, unapologetically electronic project is a risk. But it’s a gamble that pays off in spades, as Venson is clearly able to master any style she explores. This new album affirms her musical expertise and the unique inventiveness of an artist that can effortlessly slide across genres.

A bouncing synth pebble skips across a pond of drawn-out, swelling chords in the first moments of “The Mountain Was Great,” a sleek introduction that sets the tone for the seductive, mechanical dreamscape Venson splashes across her canvas. Her seamless inclusion of electronic chords amidst the compelling medley of computerized sounds reflects an expertise in the piano that she developed in childhood and honed at the Berklee College of Music. The haunting vocal repeat, “Walk with him,” is chopped up and swirls down a whirlpool of computerized bells and claps. We are thus welcomed into Venson’s personal Atlantis, sinking fast into a previously unexplored world of blissful mystery and distortion. It’s a thrilling departure from what she’s comfortable with.

Venson could have, with this album, returned to the familiar space she has carved out for herself as the circus master of pop euphoria. Her 2019 project, Joy, sketched out an incredible musing on the ecstasy of infatuation and true love. The success of this venture makes her new album all the more impressive. She leans into the discomfort of the different and unknown, while maintaining a firm grasp on her artistry at its core. She grew up obsessed with Disney movies and Broadway musicals; as a burgeoning artist, she leaned into their themes of self-confidence, romance, and fairytales. But Jackie the Robot, Vol. 1 immediately announces itself as worlds away from what you’re used to hearing from her.

The introductory EDM notes wipe away any previously established perception of Venson as the cheerful wizard casting a spell of self-love. And yet, as you give in to the headbanging guitar riffs beckoning you into the forest on “With Thick Trees,” you find yourself as enamored with this darker, morose side of Venson as you were with her bubblegum, self-actualized persona.

Soldiering on, we are blessed with two appearances from Zen Masuta and her bewitching soprano. Declaring “Stillness causes panic/How did I get so manic,” Venson and Masuta tap into the engaging theme of going stir-crazy. The song, “And Sharp Rocks,” perfectly summarizes the emotional layers of the self-isolation required of us all during the coronavirus. The pitched-up shrieks of “Wanderlust” ring out over an incessant medley of record scratches and glimmering bells. It’s the messy, the frustrating, and the infuriating, all bouncing off the walls of a metal cave, begging to be let out. The dizzying combination of arpeggios over thudding bass is accented by haunting vocals that forcefully rush in, only to splinter out into the sky like a flock of birds that’s been disturbed. It’s a peak into the quarantine state-of-mind, a constant deluge of inescapable worrying that bursts free across a landscape of nerves. On this song, Venson takes you on the never-ending run of an existential crisis, culminating in an explosion of frenzied energy that mimics the moments of overwhelming anxiety that we are collectively feeling during this time.

The two-punch move of “With Thick Trees” and “And Sharp Rocks” truly cements the album as an avalanche of emotion. It calls to mind the often unnamed, but deeply felt concept of an “archive of feelings.” Coined by Ann Cvetkovich in her book, An Archive of Feelings, the term is for a carefully crafted space that contains all that cuts through your soul. In piecing together the despondency, joy, and fury of your moment of being, you find growth and progress, a path forward through the darkness (Cvetkovich 3-4). Jackie Venson has forged this avenue for us in the midst of a tumultuous and chaotic period of our lives. We are forced to reside in the realm of uncertainty and fear that has swept away the stability we carelessly held in our grasp. With this album, rather than trying to lure us into a tempting world of temporarily-pleasing delusion, Venson artfully dives right into the unease. The cutting lyrics that emphatically burst over the soundscape of a keyboard being twisted apart and molded together throughout this work create an unusual but therapeutic oasis.

We get fresh doses of maturity on the closers, “They Climbed To The Top” and “And They Came Back Down”. An anxious techno blend of chords and flute skitters through the mind, guiding the eager listener to the climax of this arduous mountain trek. Hints of germanic and euro style house harken back to Venson’s storied history as a jack-of-all-trades. She has a predilection for flawlessly weaving together sounds from a variety of origins into something altogether new. Still, she can’t help but take a beat to wrap herself in her own vices. Her commitment to the piano shines through here. It’s the instrument she can’t seem to resist leaning heavily on at this juncture, building to a climactic conquering of the climb. There’s an irresistibility to this dreamy moment on the album. Venson allows herself to be coddled in the embrace of unbreakable romantic bonds– or rather, the notion of enduring romance. Admitting, “And I never want to be without you in my life”, she unabashedly free-falls into the chasm of all-consuming love. This moment centers on the exultation of no longer having to rely on yourself and the dizzying high of codependency.

But she won’t allow us to relish this stay in the land of romantic naiveté for long. Venson’s ready to take us right along on her journey of self-actualization, and there’s no time to wait. True, meaningful growth requires confronting our own faults and weaknesses. In order to meet the enlightened self we crave, we must dash to new frontiers with a bravery that’s difficult to summon. But Venson can do it, and so can those that choose to hear her message. Her career blossomed when she began to experiment with guitar, the instrument she hadn’t mastered during her Berklee College days. Picking up an unfamiliar instrument and crafting the foundations of songs from it was a daunting task. But her embrace of experimentation led her to the exceptional music that she makes today. She thus leans fully into this previously unrealized talent of hers. The closer, “And They Came Back Down,” is almost entirely speculative riffs on the electric guitar, epic climbs and falls of staccato. Proclaiming “Always searching/Never settle down, never settle down/I don’t care what they say,” Venson establishes a liberating acceptance of her story not being over. The fairytale isn’t complete. The prince is not found, but love is not yet lost either. And in that space of mystery and the unknown, Venson has found that rare serenity.

Venson informs us that it’s okay to be messy and devastated. It’s normal to feel as though you’re fracturing in a million different directions, and your soul can actually mature when you embrace the enigma that is life and love. This innovative album ultimately teaches us that when you lose yourself in the frenzy and allow the winds of dystopia to whisk you away, you may find that peace you desperately crave. It’s a project that will undoubtedly buoy many of us through this period of uncertainty.