The eccentric and otherworldly music of Tiana Hux

To look at the nexus of Tiana Hux is to find two major origin points, her birth place and where she flourished. Where first we find her, however, is Austin, Texas. Not the one we know now, the Silicon Valley of the South so to speak, but closer to the one we see in the world of Richard Linklater. A smaller community affixed on being weird. Austin isn’t Dallas, or Houston, it is the forest oasis in the Texas desert, and it cared more about retaining its small town charm despite its growth than its sibling cities did. It was where Tiana learned to play the drums, formed a band, and started performing. That attachment must have stuck with her, because after leaving for a small stint at The Art Institute of San Francisco, she returned home to UT to finish her undergrad, expanding her artistic tool set from conventional drawing and painting  through a focus on creative arts. 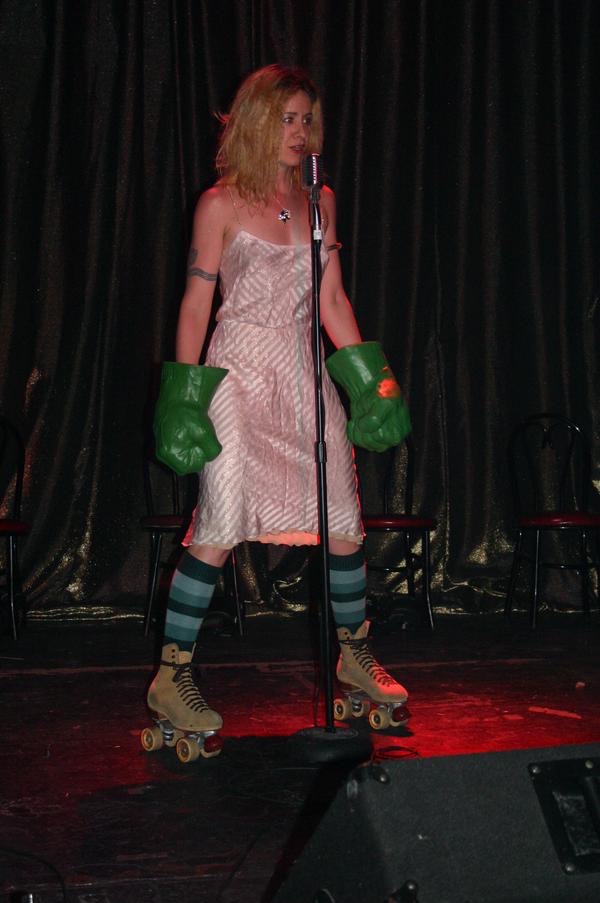 Though the comfort of home is often intoxicating, it can be a creative quicksand, and rather than sink in comfort, Tiana made the move to New Orleans in the 90s. What she found there was a place for her creative impulses to truly feel unchained. Her performances expanded into hip hop, burlesque, master of ceremonies and much much more. This is where we probably see the most “typical” Tiana Hux — a woman proudly exploring the outer rims of her art, finding new and different ways to perform and incorporating them with her always expanding tool set. From the drums to hip hop, from hip hop to burlesque, each informed by the venture behind it. All of this cradled by the incredible community of the city, providing her with vital feedback for her growth.

She couldn’t stay as long as she would have liked though. Tragedy in the form of Hurricane Katrina stole her away from the city she fell in love with and displaced her to Los Angeles. Convinced at the time that this was where her career naturally was supposed to grow, she never truly connected with the cold insincerity of sunny LA. New Orleans had a community of artistic wanderers all working with each other to build something bigger. L.A. has a corporate machine making people’s art not their passion but their burden. She longed for the sincerity of New Orleans, and so, after a short stop back to her start in Austin, she returned to New Orleans, permanently, in 2016 and has continued to build her image since. She loves sharing her music with the New Orleans community and being supported by her peers.

Tiana Hux grew up teaching herself music. She was in a rock band with her friends and taught herself to play the drums. She used her music history to develop her own style. She used her unique rap style to tie into her band, her MC career as well as burlesque shows.  When she first went to school it was for drawing and painting, but she found herself wanting to pursue music and performing arts. Growing up, she was influenced highly by the Beastie Boys and MTV. This is where she first started to develop her own style. Unlike many hip-hop styles, she does not freestyle. Her music involves thinking about each phrase and word choice and being very intricate with how she writes her songs.

Tiana’s approach to her work comes from a gaze that looks at her place in the larger context of hip hop and asks for something better. She refutes the objectification of women that had been so often repeated at the most prominent examples of the genre and, instead, insisted that her work reflect her being a woman as a source of power.

In Tiana Hux’s work, she acknowledges the history of rap and acknowledges that she is breaking the mold as a white woman in the rap community. She does this by recognizing the importance of each person’s history and their journey in the music world. She focuses on multiple creative avenues in her work in the industry including her role in her band, Malevitus, and her role as MC Sweet Tea. In the early stages of her exploration in the industry, she knew that she didn’t want to work solely in a fine arts context and wanted to explore crossover with early performance artists.

As an artist, she enjoys telling a story with each musical piece, most evident in her burlesque performances. For example, in her song “Nola Woman,” she tells the story of her coming to New Orleans and how it is different from where she was before. She discusses the characteristics of New Orleans and what she embraces in it. Historically, this creative outlet has focused on women displaying their bodies with enticing dances, styled in a vintage sense with regards to their hair, makeup and dress. However, Tiana built her shows to focus less on the physical skin reveal and more centered around the idea of displaying ideas that weren’t previously known about the performing character. This aesthetic shows a countered approach to the stereotypical burlesque performance one would expect. This is a testament to Tiana Hux’s revolutionary approach to music that will shock and fulfill the viewers.

Additionally, these aesthetics connect to her personal history as an artist. Tiana states that she “enjoys telling a story with each piece, as each has its own identity and purpose.” Her goal in this type of performance is to leave a space for the listener to interpret the work for themselves while simultaneously provoking certain feelings through the inclusion of specific details. Growing up, one of her notable influences includes the Beastie Boys. She explained that the group had shown her performances unlike any other she had ever witnessed, which in her opinion “opened a window to another world.” This influence speaks to her current work in the sense of pushing boundaries and pursuing a dynamic approach to music and performance work. Additionally, Tiana’s childhood in Austin, Texas led her to a very progressive approach with a permission to think on a large scale. The blended cultures in both Austin and her other home, New Orleans, have allowed her to move across music genres and bend the traditional barriers of music.

Tiana Hux is also credited with inventing “honkytonkpunkrockhiphop-burlesque,” according to her biography. This mind-bending musical genre title involves a blending of multiple sounds and aesthetics that Tiana utilizes in her work. Most of the notable sounds that appear in her music combine her raw vocals with the backbone of the drums and the overlay of the techno-sounding beats that combine for a funky and upbeat sound.

In Francesca T. Royster’s book, Sounding Like a No-No, she details the definition of eccentricity in musical performances. She defines it as “creative, elusive, rocking racial, gender, and secxual lines.” This definition includes a focus on fluidity, and Tiana Hux is the complete embodiment of musical eccentricity in her burlesque performances, focusing mostly on blurring the lines of sexual performances and boundaries. Additionally, Royster also states that eccentricity includes “the freedom to be strange.” Tiana is certainly a talented performer who thoroughly enjoys adding strange elements into her performances, such as puppets, burlesque dancers, and a cross between rapping, rock, and punk music.

Apply heat to Tiana, and she will expand and bounce off every surface imaginable — colliding into the new venues and scattering off with a new aspect of her presentation or new vestige to her performance persona. Sleepy raps about Pals’ Lounge transform into energized, frantic rock that feels less Kim Gordon sultry and more cherry bomb. Where her music may have talked more about New Orleans as a hazy bar-lit day dream, today Tiana’s music has a solid loud boot planted firmly within it. A proud stance informed by a stronger presence in the city than what she had in the past. She still performs with Malevitus, her most recent venture after 2018’s MC Sweet Tea and the Head Band. She MCs now at regular burlesque shows around town; she’s worked at Upturn Arts providing kids with art education; and perhaps in a strange culmination of all these things, a very appropriate for hire Marry Poppins performer at kids parties. If you want people to notice you in NOLA, often the best way is make it impossible for them not to, and with the power and energy of a supernova, Hux has this covered.

What happens when you have to stay inside though? What happens when the city with 30 different great live shows any weekend suddenly has zero? For Tiana, it’s a moment of rest. There’s nobody to share her art with, and the personal aspect of performance doesn’t quite translate to the incandescent screen. She misses her peers and her city, a feeling maybe similar to shortly after she first started recording in New Orleans in 2005, the same year Katrina made a mark that still hangs in ghastly memory to this very day.  What happens when you bottle up a thermal reaction? Two things, normally, it either loses it’s inertia and dampens, slowly relieving pressure over time, or, a more likely fate for Tiana, it builds and builds until it finally combusts, once again free to scream in the streets of the city that yearns for it’s music makers to come back.

Even if this moment provides a brief reprieve of Tiana Hux, that much devotion to adding and changing and shaping her craft into something different, stranger and even seedier, it doesn’t go away. It’s the itch underneath your skull that doesn’t get scratched until you can make something with it and show it to anyone, anyone at all who glaces in your direction. It’s the drug of performance, and the fix of creativity applied liberally. Tiana just needs the gates to open again, and she’ll peddle her wears again one day.

Jazz Henry: Portrait of an artist
Musicians
3.15.20: Gambino’s State of the Union