Notes On a Conditional Form: A New Era for The 1975 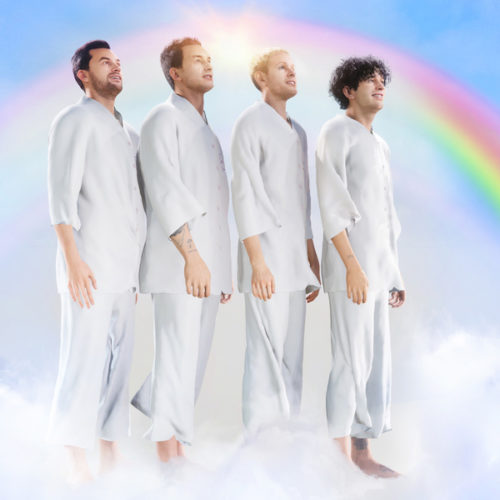 The 1975 posing under a rainbow. Photo credit: Interscope Records.

The 1975’s Notes On a Conditional Form is a wake up call for the rest of the world. NOACF is a massive album; it requires patience to understand the full scope of all The 1975 is trying to get across. In the months following the announcement of the new album, anticipation grew exponentially due to their previous, wildly successful 2018 album A Brief Inquiry Into Online Relationships. However, fans that were expecting something of the same vein would be sorely disappointed, as this album produced a version of The 1975 we’ve only ever flirted with. The “old” 1975 painted images of dreamy love songs and teen angst, oozing with synthy choruses and lyrics that are written in diaries across the world. What was actually awaiting us, was a social commentary on how the world has gone to shit.

The album starts with the track “The 1975,” which is actually just a narration from environmental activist Greta Thunberg. She calls listeners to action, reminding us that while previous generations have failed, homosapeians haven’t yet failed. Thunberg speaks over music that sounds somber, playing like the ticking of a clock that is ready to awaken us to the decline of our planet. While the clock ticks on to the intro song she begs the listeners, “So, I ask you to please wake up and make the changes required possible / To do your best is no longer good enough / We must all do the seemingly impossible.” While the introduction to this album isn’t technically a song, it’s a clear message as to what this album is about, waking up our generation and reminding us that we have to fight for a better world. We can only rely on ourselves to fix what has become of this society, both environmentally and otherwise.

It’s fair to wonder who these songs are directed towards: who exactly needs to wake up and take action? The answer is simple: those of us who grew up in the age of technology, the generation whose first phones were iPhones and have carved an entire world through our laptops. Similar to the New York dance floors during the AIDS epidemic, music and safe spaces are able to foster discussions of social and political issues amongst like minded people (Lawrence). Tim Lawrence’s NY dance floor created a safe space where people with the same hobbies could recognize their interests intersected in more than just the recreational realm, but a socio-political one as well. However in 2020, these discussions aren’t taking place on dance floors; they’re taking place in coffee shops. In cities all over the country like minded people are brought together by the music they love and discuss ways to bring forth racial equality, smash the patriarchy, and solve climate change all over a cup of joe. We all have an image conjured up when we think of people who seek out local, Mom-and-Pop cafes over their nearest Starbucks, and they tend to have similar tastes in music, coffee, and social/political ideologies. The 1975 is promoting conversations amongst their fans of greater political issues all with the help of albums like NOACF. 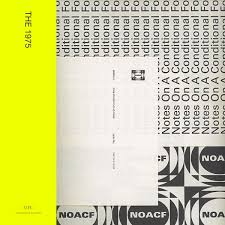 When listened to on shuffle, the album sounds like a clusterfuck of noises any 1975 fan would doubt belonged to them; this was a mistake I vow to never make again. I have to admit, upon initial listening I was disappointed. It seemed as though they were abandoning their image to prove a technical point to someone who doubted their legitimacy based on their previous works. Yet the longer I listened to the album, the more I realized it’s reminiscent of that same bedroom pop I know and love, but it’s been elevated, it went to college and came back with stories. When listened to in the correct order the songs blend together, so that the songs are indistinguishable as separate from one another. Instead the songs melt together like one long hour and twenty minute film, painting a story of how our generation has been set up to fail by those that came before us. The 1975 want us to know that while we’ve been bred as frail, surface level humans growing up focused on social media and unable to put together an email without the use of an online thesaurus, we need to get our acts together if we want to live to meet our grandchildren. NOACF calls us out and lets us know the passiveness with which we’ve handled issues in the past won’t cut it anymore.

The band utilizes sounds not previously found on their albums, making use of techno beats and voice dubbing that often leads lead singer, Matty Healy, sounding like a robot. They bounce between this new, futuristic-disco sound and a more familiar vibe with soft piano and slow drums that are something of a 90’s feel good movie. NOACF connects one message to another using a multitude of songs with no lyrics at all, leaving listeners with their thoughts between songs. In reality, this is what holds the album together as a cohesive unit and protects it from being a random splattering of various political messages and stories of romantic disappointment.

The album presents songs that deeply contrast one another. Take the song “Shiny Collarbone” which seems to offer nothing more than a Jamaican inspired, Scandanavian house song. While it expands the previous reach of The 1975’s previous sound, it feels somewhat out of place on this record. Especially when comparing it to a song like “Nothing Revealed/Everything Denied” which, while I didn’t grow up in a gospel church myself, reminds me of a Sunday morning church service with a gospel choir begging for solace in this cold, lonely world. The overall church-ness of this song is ironic, considering Healy has proclaimed himself an Atheist on more than one occasion, both in their music and in interviews.  When Healy and the layered choir call out “Life feels like a lie / I need something to be true / Is there anybody out there?” it reminds us that all that we as humans go through often seems like a sick joke. The song samples the sound of children’s laughter quietly in the beginning and throughout, reminding us of the innocence we all once had, and have since let go of to deal with issues a child could never fathom. While the song focuses on Healy’s struggle with fame, it can be more broadly applied to those of us who feel alone, or like we will never be able to please anyone, even ourselves.

The second song on the album, “People,” is a tip of the hat to those British punk bands that came before The 1975 like The Sex Pistols, who similarly to The 1975 don’t fit the stereotypical male image of rockstars. Wearing makeup, women’s clothes, and dressing up in costumes are all well within Healy’s wheelhouse, much like that of The Sex Pistols and other pop punk bands from which they draw inspiration. The screeching of Healy’s voice is accompanied by loud drums and a constant static that fill the listener with a sense of urgency whilst the lyrics scream at us: “Wake up, wake up, wake up / It’s Monday morning and we’ve only got a thousand of them left / Well, I know it feels pointless and you don’t have any money / But we’re all just gonna try our fucking best.” This album contains song after song echoing the insecurities of our generation. With lyrics like “When you feel no one knows just what you’re goin’ through / When your insides feel much colder than snow,” laid over a soft piano reminiscent of a Disney song, we’re able to feel less alone and slightly more connected to one another. The use of a distorted voice echoing Healy’s words makes ears perk up, emphasizing everything he says.

Notes On A Conditional Form comes at a pivotal time in this world’s history. Nestled between a global pandemic and the most critical war on racism and inequality our generation has seen, it was meant to act as a set of anthems for exactly what we’re going through: a fight that we could’ve never expected would fall onto our shoulders. The constant use of computerized sounds remind us of the digital world we live in, while Healy’s aversion to religion proves that religion won’t save us in these tumultuous political situations. So it’s time for the Coffee Shop Kids, brought together by The 1975’s music, to speak up and act. The album beckons to us to fight for ourselves in times like these, because while the album itself would if it could, the most it can do is be the soundtrack to our fight.

The poetic city: “Riding Out The Pandemic  4/4/20” Editor’s Note: The following series “Car-free Commute” is a week-long series curated by...

The everlasting legacy of Mac Miller
Music
Mac Miller’s Circles: This is what it looks like right before you fall