From Clips to Clicks: Bridal couple placed in a crate and shipped in a baggage car

Editor’s Note: No, this isn’t The Onion, and yes, you are looking at a real news story. Students in Kelley Crawford’s Alternative Journalism class at Tulane University dove into the archives of the Times-Picayune to find some shinning star articles. Everything from people having snakes in their bellies to a man becoming a human torch will be covered in the series, “From Clips to Clicks.” Each weekly post will display the original piece from the Times-Picayune (the “clips”), and then the written text will either be a modern adaptation or a commentary on the piece that’s published on ViaNolaVie (the “clicks”). 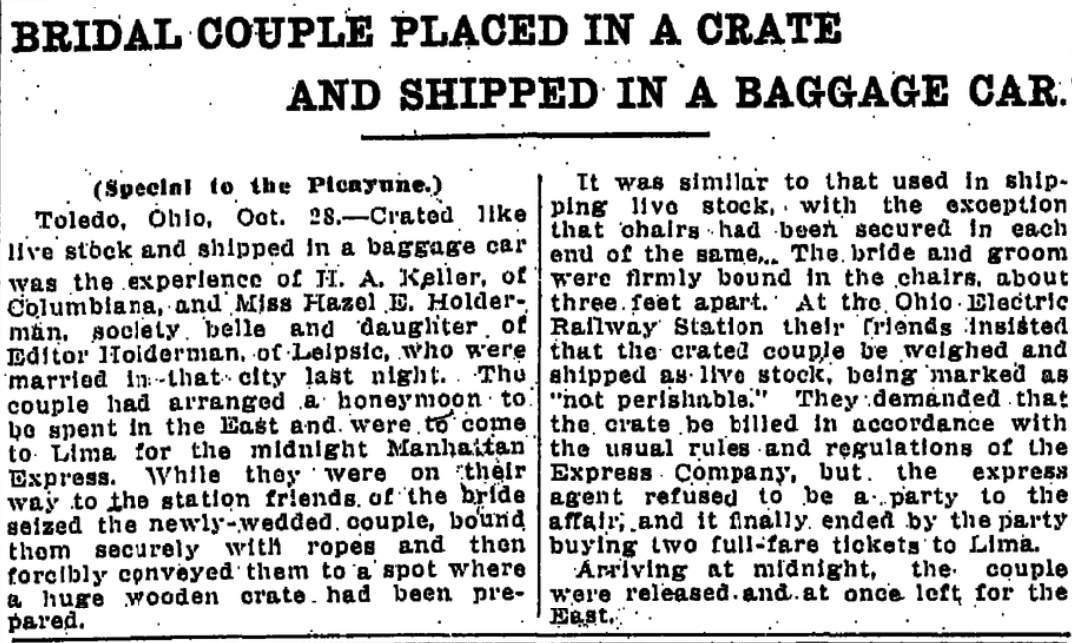 Screenshot from Tulane Archives of a Times Picayune article from October 29, 1910. It describes an unfortunate end to newlyweds’ wedding night.

The news never ceases to amaze me. In this article, the bride’s friends kidnapped the newlyweds after their wedding and attempted to ship them as livestock. First of all, these “friends” are far from stereotypical. I wonder what the couple was thinking while the bride’s friends roped them up. Did they think it was a joke? I probably would have thought it was a joke at first, but once they put them in a crate and roped them to a chair, the joke was over. I wonder if there was a secret motive to it. Was the husband an ex of a friend? Did the couple as a whole do something negative to one or all of the friends?

Surprisingly, the fact that the friends wanted to ship the couple as livestock is a good thing because they would not be left in the crate as long as perishable items would. I’m glad that the express agent caught the friends in the act before the couple was shipped elsewhere. The story does have a good ending because the couple ended up going to their planned honeymoon destination. I highly doubt that their honeymoon lived up to their expectations because it is hard to follow that once-in-a-lifetime experience with a dream honeymoon.

The Truth about the Big Easy: Flooding in New Orleans, what is the fix?
Environment