Editor’s Note: For our “Perspectives” series, which talks with New Orleans-based journalists, pod-casters, documentarians, and photojournalists about their place and role in the journalistic world, Andru Okun was interviewed by Olivia Lemonides. Andru Okun is the Associate Editor of Antigravity Magazine, one of the only alternative presses in New Orleans. 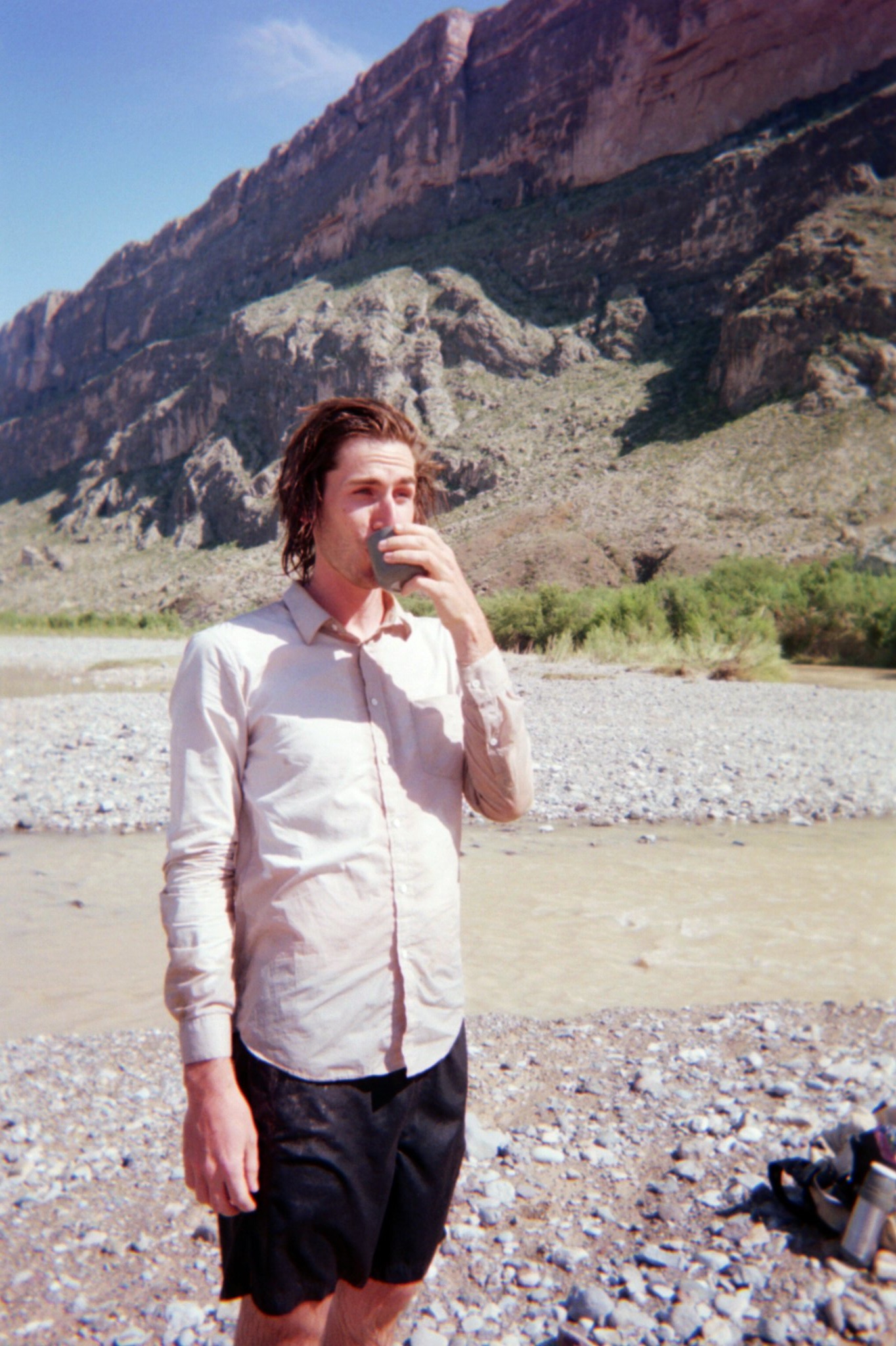 What: Writer, journalist, and Associate Editor for Antigravity Magazine

A Quotable Quote: “In my work, I like to amplify voices that may not be getting heard. I don’t want to alienate anyone through the writing that I do; I want to spark conversations.”

Would you Define yourself as an alternative journalist?

I don’t even usually think of myself as a journalist so much as someone who writes, but I wouldn’t object necessarily if someone tried to call me that. As far as choosing a subject goes, I tend to interview people who can shed light on New Orleans or offer a perspective that I think is valuable and worth sharing, and I hope that other people find these perspectives valuable too.

When following your subjects, how do you take notes? Are there ways journalists can be too invasive when gathering information?

I try to talk to people who are from New Orleans, as I focus on gathering stories about this place. I use a handheld recorder; I don’t use a phone. Ideally, I meet people face-to-face, and I interview people for longer than they want to talk sometimes, but I try to make up for it by being really engaged. I interview people who I admire.

Keith Calhoun and Chandra McCormick are two photographers who I really admire that I interviewed,and they have been shooting for 40 [years]. They have this immense amount of knowledge that I can tap into and that makes for an amazing read. If you’re going to interview someone, you’ll have to track them down. Journalists can definitely be invasive sometimes. You  have to be persistent; it’s not that you’re trying to annoy your subjects, you’re just interested and want to learn more.

It might seem weird to be gathering all this information on an artist or an author, but that means that you’re doing something right because you’re really invested in the work. I find that the success ratio for me when I talk to people is that the more I know about them and the more I’ve engaged with what they’ve already put out there, the better it goes.

How do you define alternative and how do you see your work fitting or not fitting this definition?

Antigravity Magazine is a good example of the alternative because it’s not under corporate ownership. Most of the content wouldn’t be published elsewhere, so in it’s the ethos and just month-to-month logistics and practice it fits into an alternative label. I’ve been Associate Editor of Antigravity since Stan Deyo, who is the Editor in Chief, took me in a few years ago, before I had really only written a few things.  I am a fan of the publication; I would consider it a good example of alternative media. The more media that’s out there, the better. Some publications are several steps further left than Antigravity, and I think print publications are also really important as they offer a unique perspective.

This question is about your time in the Middle East that you wrote about in your piece “No Place for a Vacation”- How have your travels influenced your work as a journalist?

Being in the Middle East was both a very easy and difficult thing to write about. Travel writing is easy because you just kind of do the traveling and then you can write about it every day. The hard part about it was that it was a very contentious area. I was in Israel, Palestine, Jordan and then Egypt.

I went on Birthright and wrote extensively about that portion of the trip. I wanted to write about how Birthright operates and what it was like being on that trip from an anti-Zionist perspective. That’s part one of my work “No Place for a Vacation,” and then part two is being in Palestine and talking to Palestinians about what it’s like to live under occupation. And then the last part is about what it’s like to be a tourist in Egypt during a massive political upheaval.

It was a really intense process for me to write, and I was figuring everything out as I was going. I didn’t even know if anybody you would want to read it, and I thought, ‘if I could get like 20 or 50 people to read it that would be great,’ and now I know a lot more people have read it, so that has definitely encouraged me to continue to write. It’s something that I  felt compelled to write about, and I think that’s a good sign when you find a topic you’re that drawn to.

How do you decide what stories to cover and is there a common thread between them?

It’s on a case-by-case basis. For the two-part investigative piece about St. Roch Market, I wrote that because no one else was writing it. There was important information that I felt needed to be shared.

The prison system in Louisiana is also something that I really want to talk about and draw attention to. I’ve written about the Cornerstone Bus Project, which takes family members of incarcerated people to prisons on buses to visit their loved ones. I believe more people should know about it, and there’s something to be learned in that story. I write a lot about New Orleans; I live here; it’s an important place to me; and I want to be engaged with it, and prisons are part of that and so is gentrification, so, of course, I’m going to end up writing about it.

I like spreading awareness and challenging people’s perspectives by inviting them to think about things differently. What mainstream publications are doing isn’t necessarily wrong, and I’m not going to criticize their work, but there’s also a need for something different. In my work, I like to amplify voices that may not be getting heard. I don’t want to alienate anyone through the writing that I do; I want to spark conversations. If I can change peoples’ minds, that’s great. If you write something and it’s just for people that agree with you, it doesn’t feel very good.

Do you think you’ll always live in New Orleans? And what do you like and dislike the most about this city?

I have no idea; it’s definitely to be determined. There are a lot of things that I really like about New Orleans, so its hard to single out one, and I think the same goes for things I don’t like. I really dislike the inequity here, the institutionalized racism, and the institutionalized classism. Not that these things don’t exist in other places, but things sometimes feel magnified in New Orleans because these issues are operating at such an extreme level.

I moved here in 2010 when articles were coming out in the Times-Picayune about New Orleans being the incarceration capital of the world, and that’s something I definitely grapple with and pay attention to. This piece was published by Cindy Chang right before the Times-Picayune stopped being daily. It was an award-winning piece in 2010 about incarceration in Louisiana — the way the city has morphed and changed to accommodate rich wealthy white people and culture has changed in a way that addresses capitalism. That stuff is pretty detestable.

Do you do a lot of your illustrations and how does being an artist and journalist shape your identity?

I don’t really draw anything for the pieces and wouldn’t consider myself an artist. For most of the pieces, I’ve received illustrations through Antigravity. I work really closely with Erin Wilson, who is an artist here, and I really like his work. He’s done a great job illustrating pieces I’ve done, but there’s a lot of great artists here in New Orleans. I’ve been lucky to get some amazing graphics.

I’m an Associate Editor of Antigravity, so my involvement varies from piece to piece. You keep people in mind because certain styles lend themselves to different pieces. I originally had this nondescript ambiguous cover for “No Place for a Vacation,” and Erin approached me with a proposal to illustrate it, and from there we became really good friends and have gone off to do different things together.

Do you ever have comments on your pieces that are antagonistic and how do you use those comments to start a dialogue?

If you go into the articles about St. Roch, that’s probably the best example of people reacting really strongly to my work. I’ve done a project with Breonne DeDecker and Darin Acosta about how Airbnb is destroying neighborhoods in New Orleans. Darin Acosta is an amazing computer wizard, so we did a bunch of research and put a project together based on that. There were people who did respond antagonistically, who were like,“Fuck you, Airbnb forever,” and we’re not going to engage with those people. But there are people we did end up engaging with after that project who were already invested in housing issues throughout New Orleans, so having conversations with those people was good. Then there’s always going to be people who just want to throw blame at journalists, and in that case, you just have to let it go.

This interview was edited and conducted for Alternative Journalism, a class at Tulane University taught by Kelley Crawford.