Before you see Lafitte’s Blacksmith Shop Bar on the corner of St. Philip and Bourbon Street, you hear it. The inviting liveliness of a bar in New Orleans on a Friday night floats through the humid air, directing you towards a string of Christmas lights hanging in the distance. It’s something of a magnetic force, almost as if hearing and walking away would be so hard as defying an invisible force field that locks you in and guides you over. The whole ordeal just makes you think, “I want to have that much fun.” And so, you go, and so you do.

From inside of the old brick walls, out onto the Adirondack chairs lining the street, voices meld together to create some form of loud buzzing. Voluminous cackles echo through the crowd, high and low pitch voices alternating prominently in my ears. A boisterous blend of accents and dialects and exclamations of localized slang turn the blaring music into a subtle hum. The chatter is loud enough to make all other sounds seem like noise. It is the echo of a crowd. 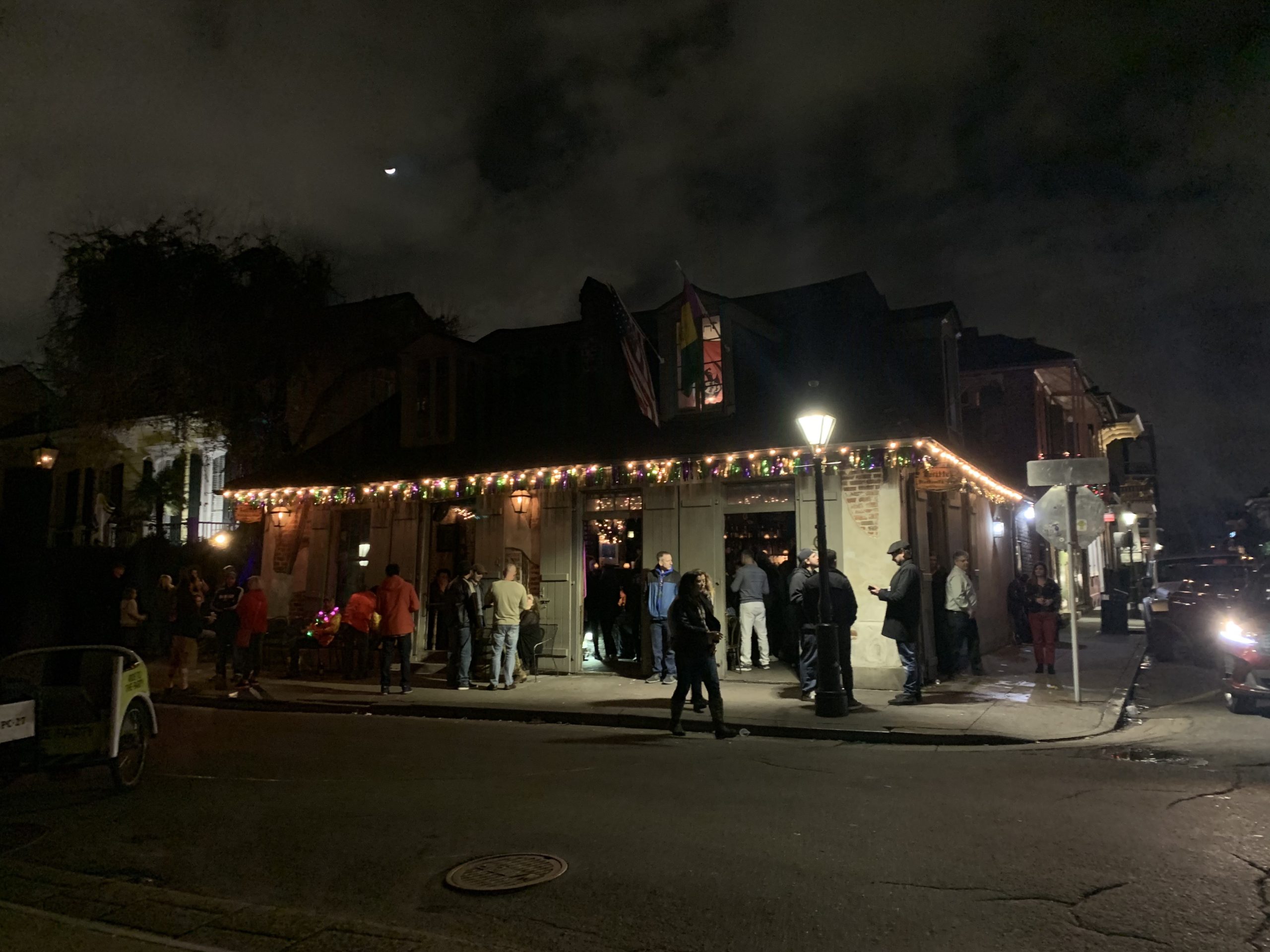 Outside of Lafitte’s Blacksmith Shop Bar, from down the street
Photo by: Halle Rudolf

You hear it from blocks away, knowing when you turn the corner that a flock of people, drinks in hand, await. The Big Easy has been known for many years as a mecca for binge drinking, parties, and unadorned fun. People come to New Orleans with “the expectation that drinking booze and participating in spectacle [are] culturally endemic,” simply fueling the fire (4). Worldly voices slurring drunken nothings into their plastic cups at Lafitte’s Blacksmith Shop is exactly this. The voices are a collection of people from different walks of life who all traveled to New Orleans for play. Of more interest than just the travelers though, might be as to how this low-brow image of non-stop partying and pleasure became what attracted these people to such a historic, culturally abundant city.

The chatter first invaded New Orleans some 300 years ago, but it wasn’t until after the second World War that it became so abundant. During this time, “New Orleans carefully crafted its image as a culturally unique and cosmopolitan city,” to keep up with its thriving metropolis neighbors like Houston and Atlanta. New Orleans had this special refinement of freedom (2). The talking and laughter escaping the lips at Lafitte’s Blacksmith Shop is exactly this — a  sense of ease and lack of inhibitions that can’t be found anywhere else. For years before it became a drinking establishment, Lafitte’s used the front of a blacksmith shop to import foreign goods illegally (4). It was a place where the law didn’t matter. Reflective of New Orleans’ “loose moral standards,” people flock to this bar in particular to find that sense of escapism and let loose (2). The voices are so loud and so plentiful because they can be, without any fear of getting caught.

New Orleans provides a uniquely foreign experience to tourists. The rhetoric used to attract out-of-towners is rooted in a type of novel history. This “creative reinterpretation” of New Orleans’ past has proven to be much more salable to tourists seeking an authentic New Orleanian experience (2). Rather than partaking in the rich African American history of community activism and neighborhood preservation, the people drawn to New Orleans are much more interested in escaping these injustices for a couple of days in favor of a good time (2). As a result of this, African Americans are “cast as the smiling street musician, the praline salesgirl, or the voodoo priestess,” in order to cater to the whimsicality sought out by tourists (2). Over time, the cultural origins of the city turned into a reinforcement of its reputation of a party haven drawing people in to escape and laugh and enjoy themselves, under the thin guise of a misrepresented history (3).

This is where Lafitte’s Blacksmith Shop Bar, in particular, holds so much of its appeal. The current owners of the old French-style brick building claim that it is the oldest structure used as a bar in America, and certainly the oldest operating bar in the city of New Orleans (1). Because so many tourists seek an experience that is “both nostalgic and uniquely foreign” when they come to the city, Lafitte’s seems to be almost too perfect (3). The different dialects heard throughout the open bar room suggest this idea of foreignness. The accents and regional slang create a melting pot, suggesting to the ear that you are somewhere far away. The buzzing and music and laughter floating around makes it seem as if everyone is having the time of their lives, and that the escapism they’re experiencing comes from the ability to be in New Orleans at Lafitte’s and be transported through both time and place. 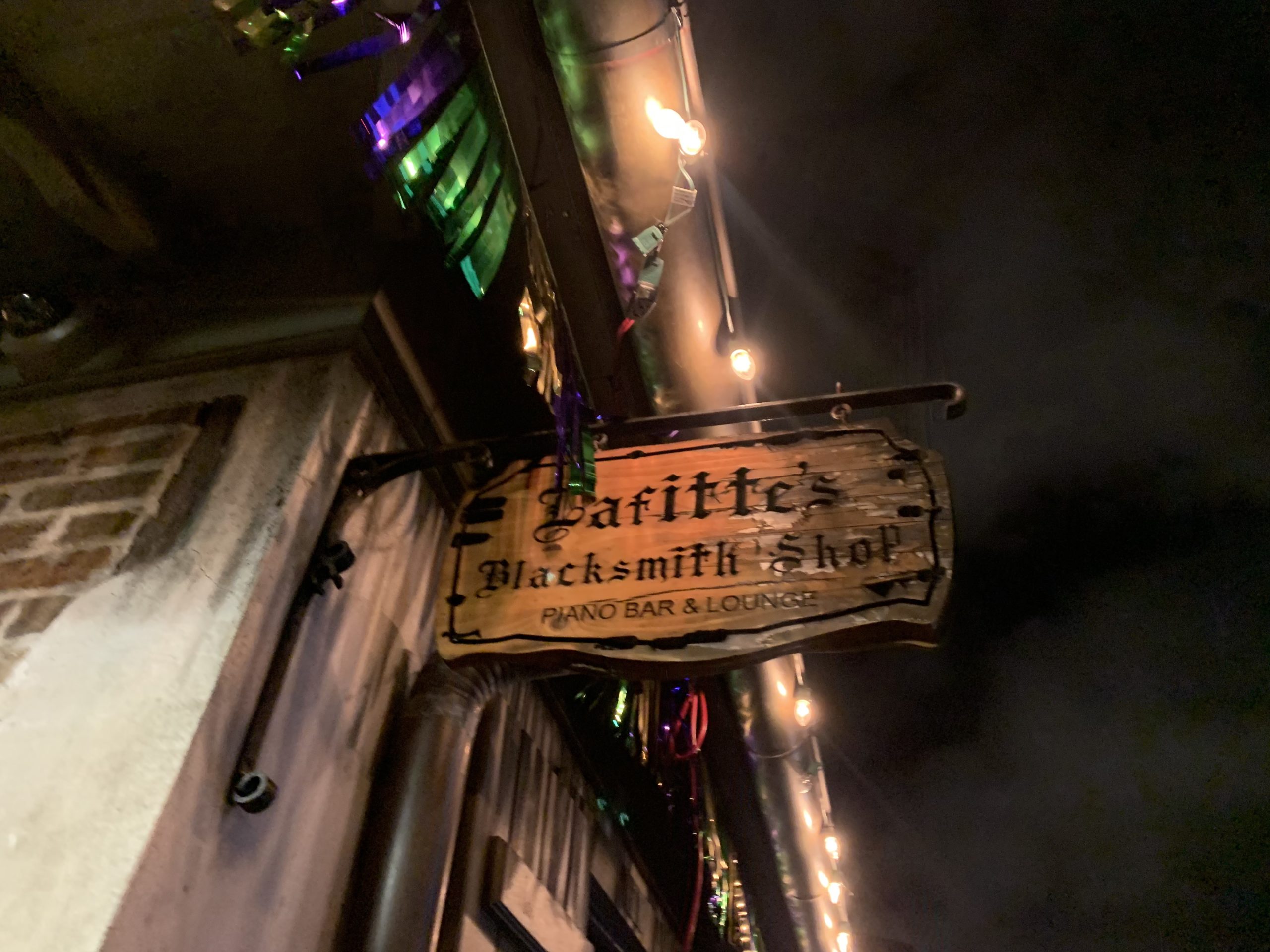 New Orleans takes on this idea of transport dichotomously through not only time and place, but with regard to its representation of two different types of escapism — the famous era of prohibition as well as a tropical isle motif (3). Bars throughout the city cater to this with not only ambiance, but also through drink selection. Restaurants market “fruity, exotic, escapist mixed drinks coincided with the traditional, nostalgic classy cocktails of New Orleans before prohibition” (3). These novelty cocktails are tailored towards the varying images tourists have of the city. Whether it be New Orleans as a humid palm tree-baring vacation destination or as the home of Jazz, Storyville and speakeasies, the one central theme is a drink in your hand. New Orleans is home to the hand grenade and the Sazerac, and ever since, they have been staples of the city’s prominent culture: drinking (3). Lafitte’s Blacksmith Shop even created its own “voodoo” grape daiquiri; it has become a tourist-drawing trademark of the bar (4).

The crowd at Lafitte’s with their clear plastic cups filled with purple slush are all people looking for their escape to one of these destinations. Tropical or historical, New Orleans “delivers an image of decadence” to the world (3). People gathered in New Orleans to partake in this spectacle of booze and belligerence in the early 20th century, and they still do today (3). The sounds that can be heard at Lafitte’s — booming voices, shrill shrieks from the crowd, and the clinking of one glass against another, and echo ringing through both ears — are a reflection of this. People are drinking and experiencing an escape not only for their bodies but for their minds. At Lafitte’s the screams are drunken and words are slurred. The crowd is happy, and free from strife, the bartender complying to whatever stereotyped image of the city they want to experience that night.

At Lafitte’s Blacksmith Shop Bar, this seeming noise — the roar of the crowd streaming into steady surge of volume — is not noise at all, but sound. The high and low tones, the hum of the music in the background, the shouts, the whispers, the clinking of glasses, and everything in between is the pitch of escape. Lafitte’s is a hub of people who experience all different sorts of things every single day of their lives. Locals, people from every corner of every continent, students, teachers, businessmen, and entertainers alike can all find solace here. They could be anywhere, but they all go to the old blacksmith shop on a Friday night, talk, laughing, and feel simply free. 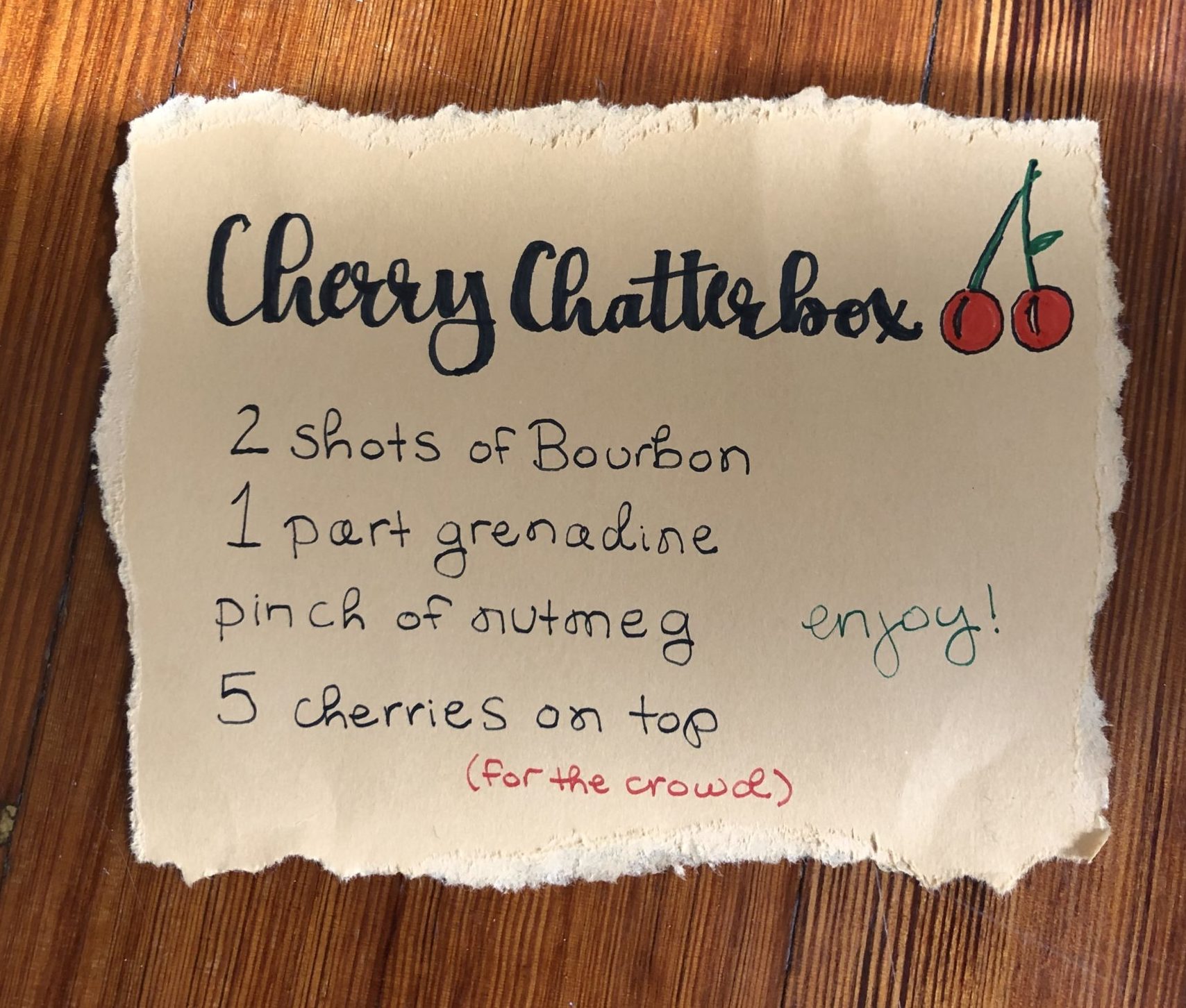 I wrote a little cocktail recipe that represented the liveliness and overall vibe of the bar on the night when I went to record my sound bite.

Hear/Here: The Psychological side of transactional eating
Restaurants