Hear/Here: The story of sounds at Bacchanal Wine

Editor’s Note: As bars remain closed, and we miss the sounds of music, conversation, and general ambiance of social gatherings, writer Abby Aronson, takes us back to the clatter and chatter of Bacchanal Wine to remind us what’s lingering beneath our sound waves.

Distant and far-removed from the heart of the city, Bacchanal Wine sits nestled on the corner of Poland Avenue and Chartres Street. The ambiguous external façade has a peculiar, but inviting aura, as a burley older gentleman sits on a wooden stool, conversing with neighborhood locals, next to the open front door that leads to the cellar. The muffled sounds of chatter grow louder with each step closer to the front door. Upon entering, the melodious tones of voices and contentment become increasingly articulate and distinct. Within the walls of this non-descript structure echoes the rich story of New Orleans history, serving as a lens to the evolution and preservation of the city’s chaotic culture. 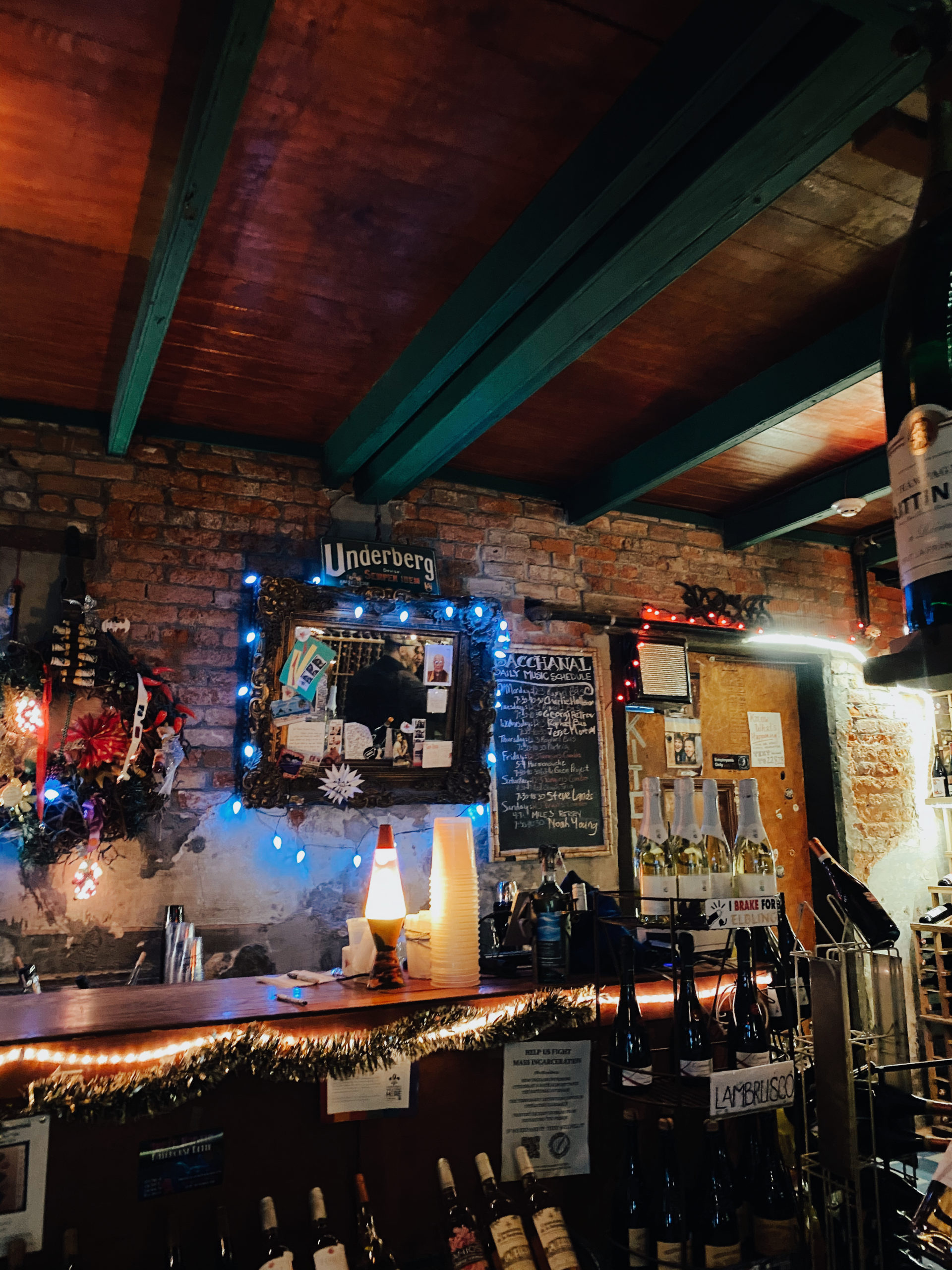 The checkout counter within the wine shop. (Photo by: Abby Aronson)

The courtyard-concept of this eclectic watering hole facilitates a the congregation of all walks of life over a shared love of food, wine, music and dancing. Metal chairs and tables sit upon a bed of gravel, rattling as they come into contact with wine glasses and wine bottles. Silky sounds of the harmonica permeate through the sea of conversations and deep belly laughs, subtly capturing individuals’ attention. 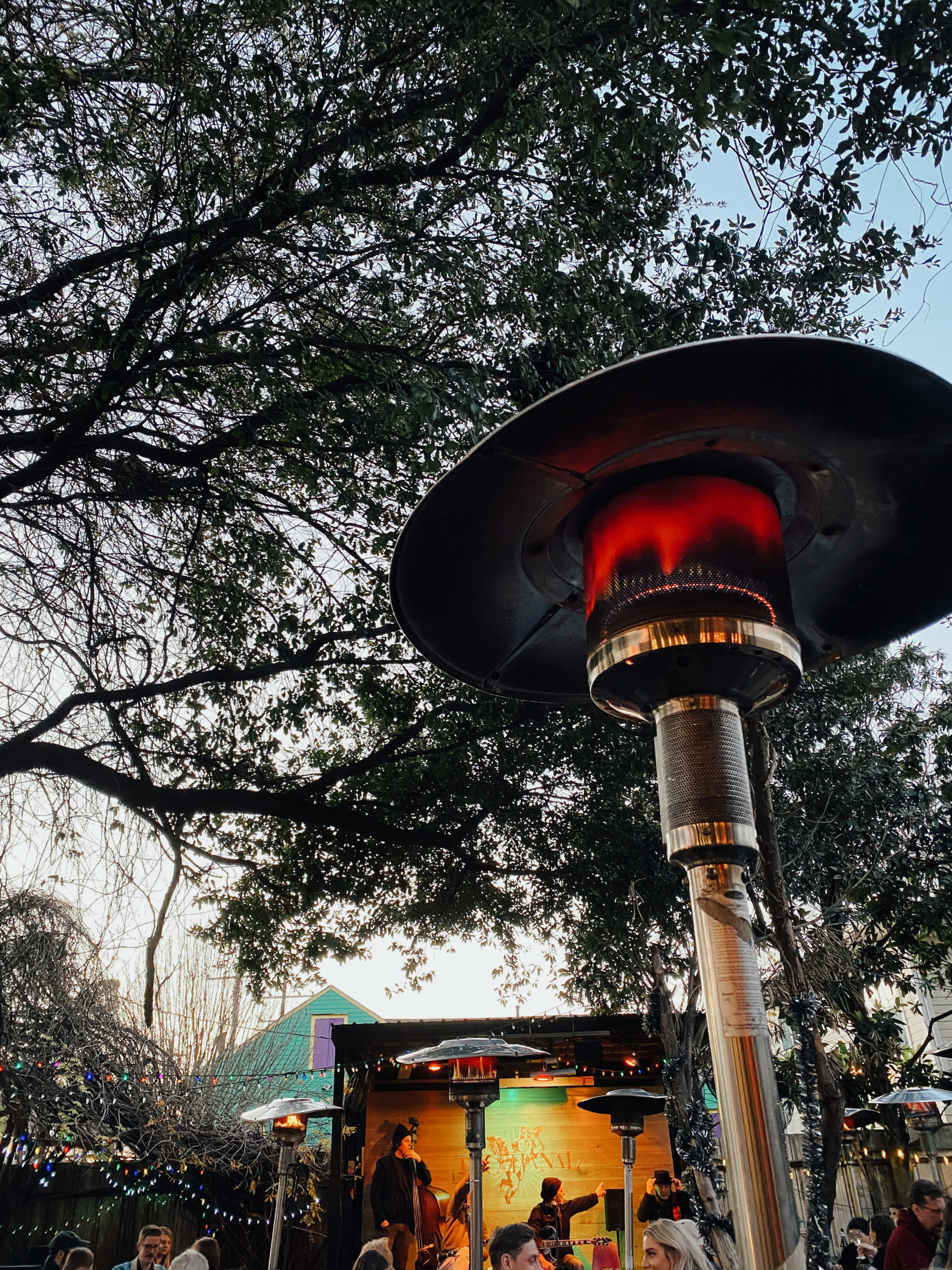 The Bacchanal courtyard as the sun begins to set. (Photo by: Abby Aronson)

Loud enough to be heard above the passionate conversation, but soft enough to not interrupt anyone, the harmonica generates four notes and gently stops for a brief pause. Upon resuming, the harmonica is blown four more times noticeably deeper in tone and elongated in its duration. Again, the sound of the harmonica stops, but this time for longer. As the harmonica ebbs and flows in its production of sounds, it begins to register as a warm-up, alluding to the procession of a more elaborate jazz ensemble. 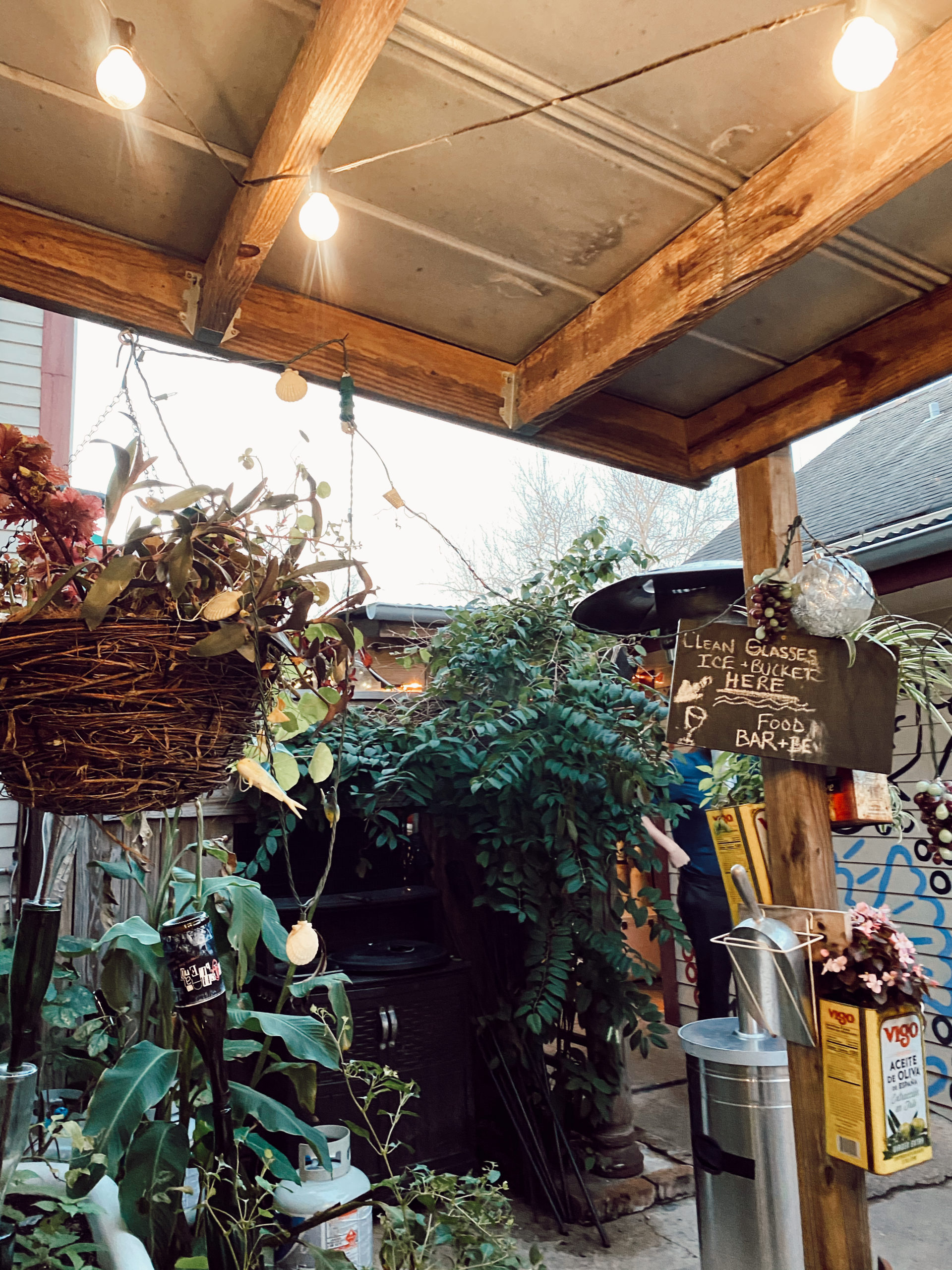 The view from the doorway that welcomes you to the backyard setting from the front wine shop.(Photo by: Abby Aronson)

It is no coincidence that the harmonica leads the band in initiating the production of sound. Created in the 1820’s to aid instruments in tuning, specifically pianos, harmonicas were born with the intention of guiding its fellow instruments in maximizing their performing abilities, explains Livia Gershon, author of “How Harmonicas Came into America” (3). Despite the role it was born into, the harmonica evolved in the jazz genre as one of the most complex instruments in its purpose:; embodying a spirit of rebellion and dynamic edge that no other instrument possesses. Jazz scholar Russel Roth contends with Gershon, explaining that its inexpensiveness, portability and adaptability sparked immediate popularity for consumers, particularly the African American population in the South (6). Beyond its convenience factor, a harmonica’s musical dynamics exceed the limitations a human voice is restricted by, often framed as an extension of the human voice.

Illuminated by Tiki Torches and string lights, the backyard space of Bacchanal is enveloped by the distinct character of the harmonica’s soothing hum. As wine continues to flow from bottles to glasses, and the swarms of people at each table grow larger, the meaning behind this neighborhood gem’s name “Bacchanal Wine” starts to come to life. 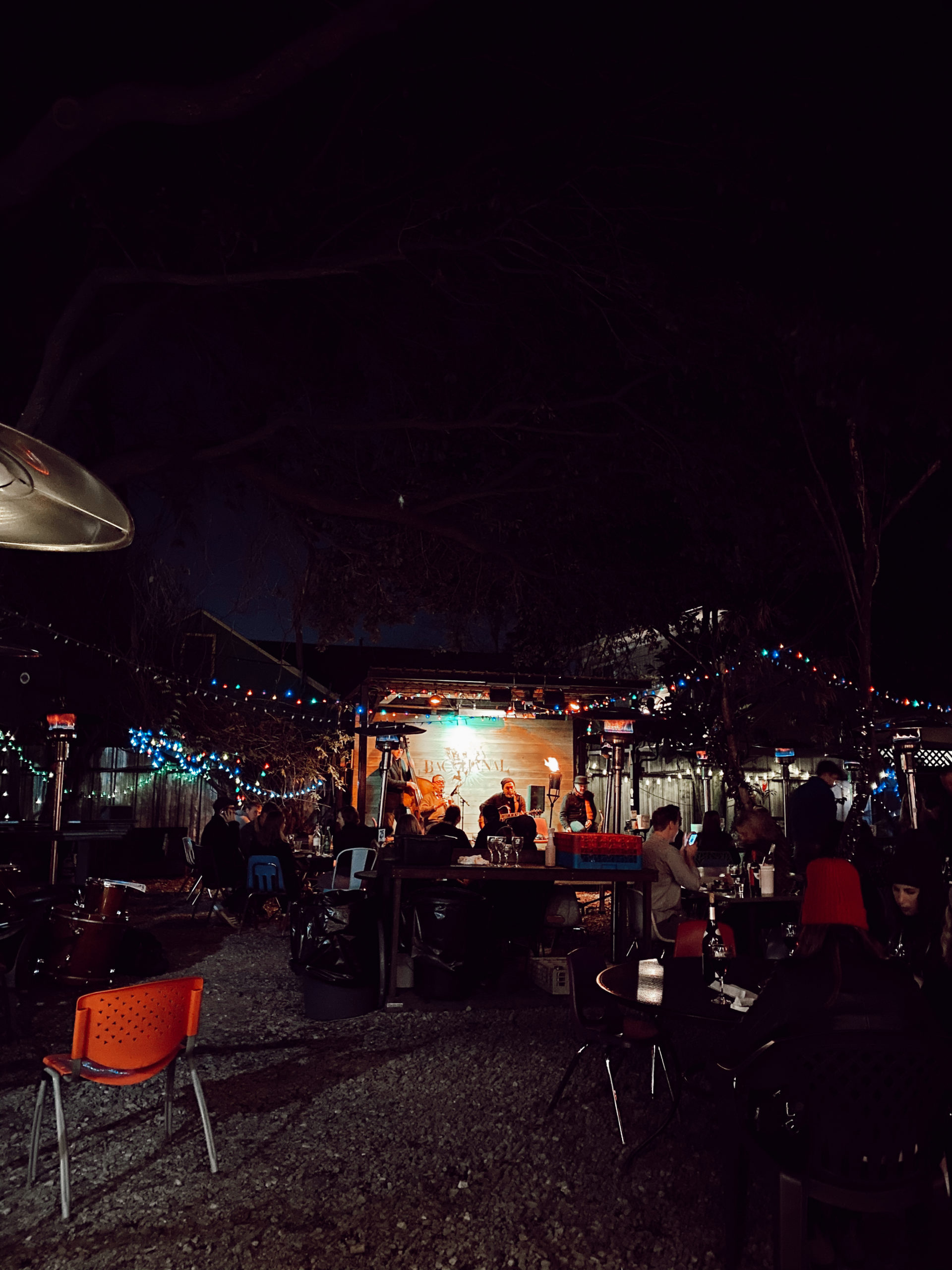 Once the sun has set, the string lights and tiki torches light up the backyard. (Photo by: Abby Aronson)

Derived from the Greek god Bacchus, the god of agriculture and wine, the term “bacchanal” was created by the Hellenic civilization to label its worshippers and a festive gathering of drunk individuals, as explained by author Iain Gately (2). In spite of Bacchus’s strong following, Gately explains, “Like wine, he brought happiness but sometimes also chaos and misery,” later noting “He was a god who stood for the untamed side of human nature, for liberation from conventions of communal living” (2). The image of mismatch chairs and the hiss of sizzling gourmet dishes being served on paper plates encompasses the divergent, unconventional personality of Bacchanal Wine. When the sun sets in this intimate backyard, and bottles are emptied, the spirit of Bacchus feels nearly palpable.

Dana Ohlson and her colleagues met with Bacchanal’s owner Beau Ross to understand the evolution of this peculiar wine bar and its journey in reaching such profound success. In efforts to inquire about Ross’s decision to put jazz music at the core of the backyard entertainment, they discussed the role the genre had in creating a distinct sense of personality for the establishment. In an article titled “How New Orleanians Fight for the Wild Ones,” they write, “Ross professed that ‘jazz fits wine,’ and that he loves jazz, so it was first on the table. But, the humble beginnings of Bacchanal also shaped why Jazz is the main theme of the venue.” (4). The development of Bacchanal’s character is a process Ross refers to as ‘“organic evolution”’ (4). 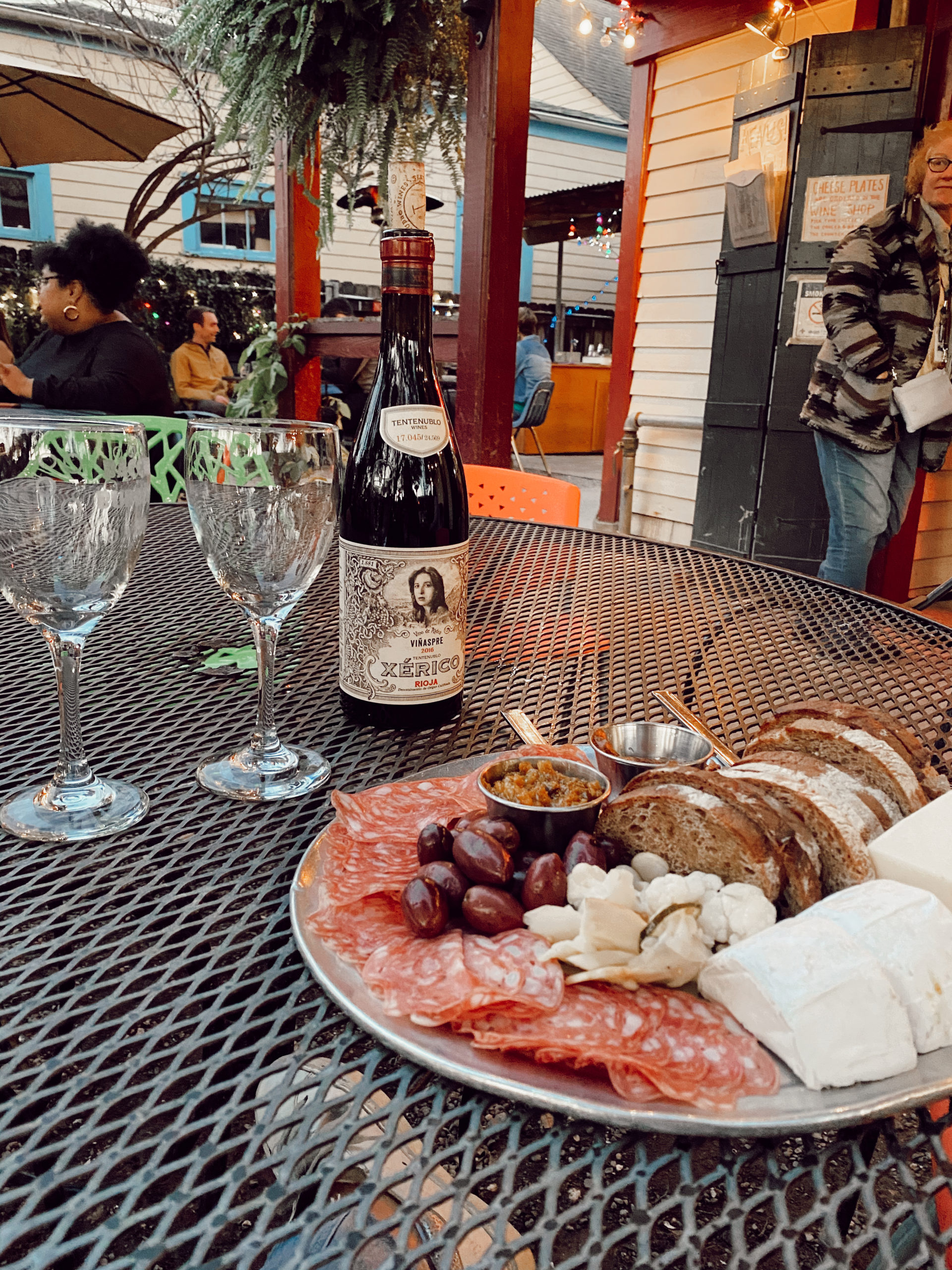 Charcuterie prepared by the kitchen paired with a bottle of Spanish Rioja. (Photo by: Abby Aronson)

Following a brief moment of stillness, the harmonica sounds again, but this time accompanied by the deep rumble of a cello. Playing simultaneously but not producing a cohesive melody, the two instruments are simply complementing one another, creating a form of controlled chaos on stage. As the strings of the cello were plucked, the harmonica was blown periodically, coming and going as it pleased throughout the piece; a testament to its historically rebellious nature. Sold for as little as five cents in the nineteenth century, harmonicas reformulated the preconceived ideas regarding who could and couldn’t become a musician (3). Given the level of simplicity required to play a harmonica, the expensive music lessons that previously contributed to the elite nature of being a musician became dispensable, making it far easier for lower-class populations, specifically African Americans in the South, to acquire and play. German historian Hartmut Berghoff explains that the upper-class understood the harmonica to be “chaotic and culturally inferior,” viewing it with extreme distrust and failing to see the benefits of this “democratic instrument” (3). Each blow of the harmonica emanates signs of strength and exhibits the good that comes as a result of redefining historically dominant social norms.

The unpredictability of the cello and harmonica’s interactions remained consistent, lending itself to the jazz genre’s strong desire for improvisation. Unlike other genres, jazz is built on the foundation of informality and values on-the-spot composition. James Patrick, an author whose focus is jazz music theory, explains that even when material is conceived prior to the performance, it is often not recorded on paper (5). The element of improvisation in the production of jazz music has posed to be a great challenge for scholars in their pursuits to trace back the history of its musical theory and the evolution of this riveting genre. The contained chaos that comes as a result of Bacchanal’s beloved jazz musicians’ spontaneous composition resonates with the divergent essence of both the harmonica and the Greek god Bacchus. 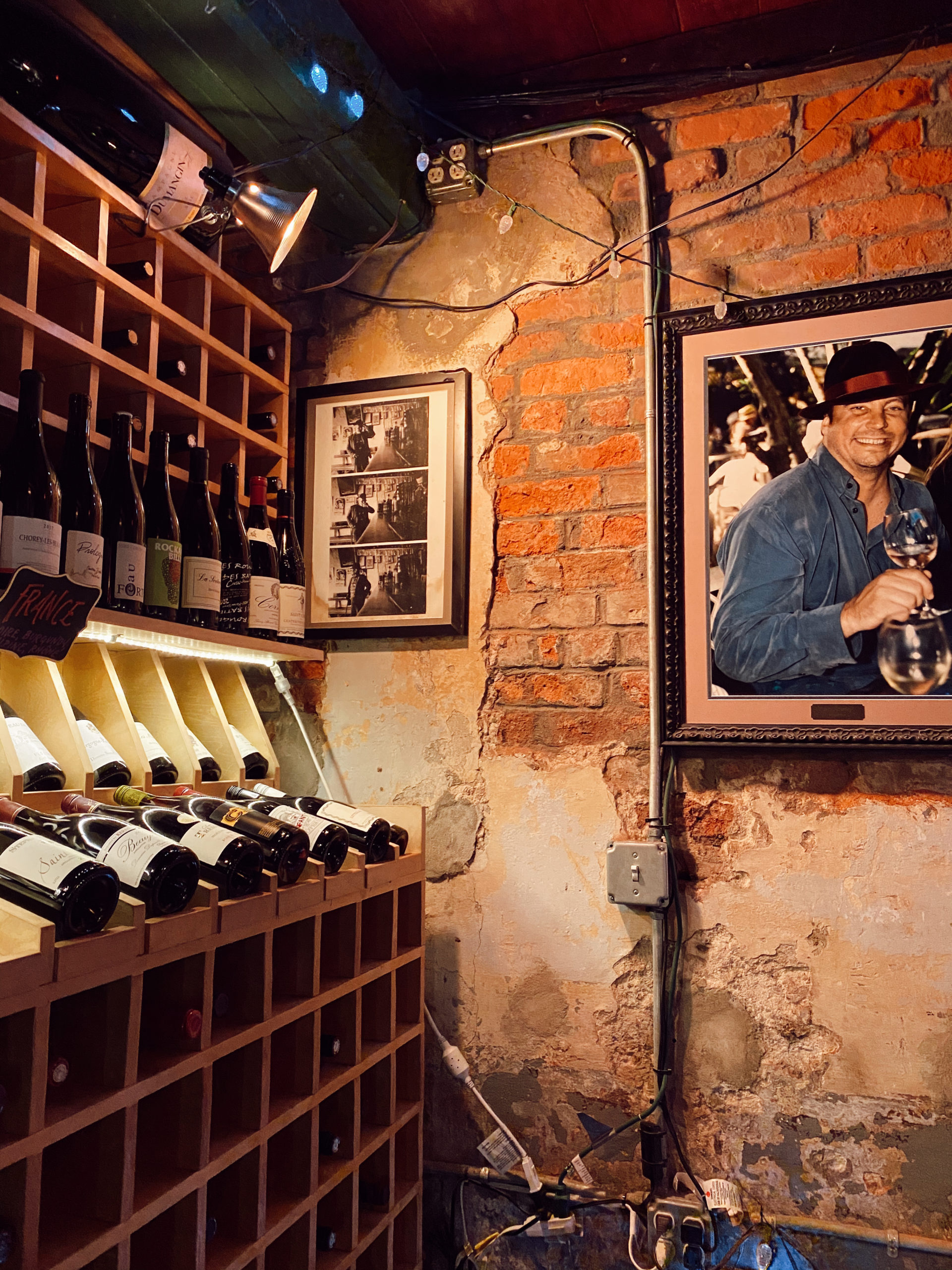 The Spanish corner of the wine shop. (Photo by: Abby Aronson)

Just like jazz music, New Orleans has developed its unique sense of self through the construction of chaos. The city’s character and culture are a product of unplanned, and often uncontrollable, circumstances. Evan Christopher, a renowned American clarinet player and New Orleans native, writes, “Isn’t it amazing that we are nearing the halfway mark to becoming not only one of the ‘most livable cities in America,’ since the failure of the Federal Levees in 2005, but also the ‘most walkable,’ ‘greenest,’ and the ‘economic engine’ of the region? (1). While the city is recovering from the tragedy of Hurricane Katrina over a decade later, it sparked an urge for reinvention across New Orleans, fostering a sense of unity in a time of extreme devastation. Ross speaks openly about the benefits that came as result of Katrina; the same storm that flooded his wine bar and put him temporarily out of business (4). Instead of looking at the losses, he viewed this uncontrollable chaos as an opportunity to create positive change, strengthen the bonds among natives and create new networks among local chefs and jazz musicians.

Seven days a week, the door to this retail turned makeshift wine bar stands perched open, welcoming anyone and everyone to engage in a communal courtyard setting that oozes with elements of controlled chaos. Zestful sounds of jazz music share the story of defiance and a commitment to embrace spontaneity. On a daily basis, Bacchanal preserves the historical origins of jazz culture, while encouraging iterations of Greek behavior through risk-taking and wildness. 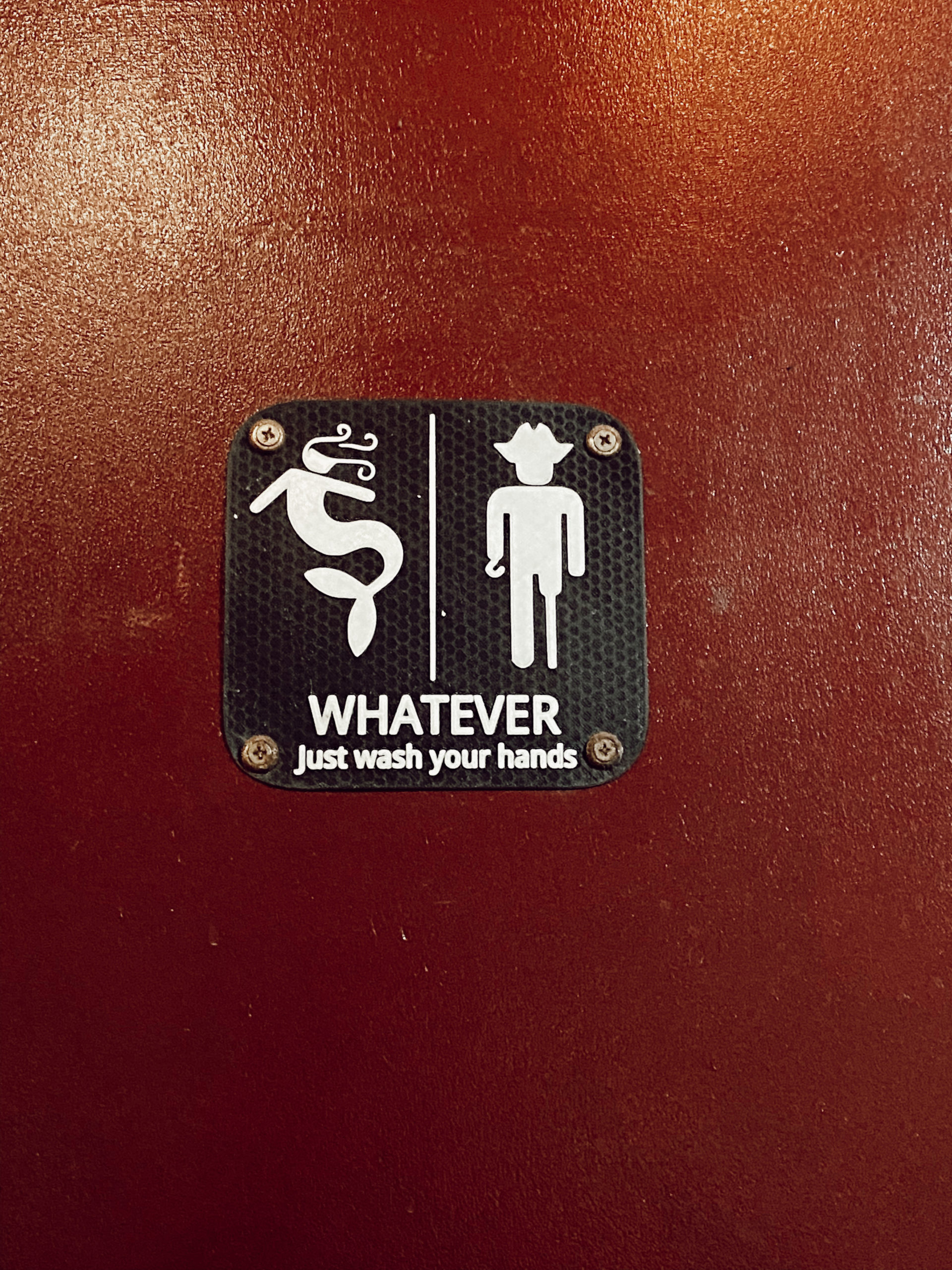 The bathroom sign that welcomes all walks of life, reinforcing the inclusive nature of the neighborhood institution.(Photo by: Abby Aronson)

So much of what makes New Orleans unique and truly special cannot be explained – it has to be experienced and listened to. Whether it’s a second line, Mardi Gras or the checkerboard makeup of its neighborhoods, it’s the clash of the unexpected that makes it so welcoming. A melting pot of history, legacy, traditions and cultures, New Orleans and establishments like Bacchanal are one of a kind. 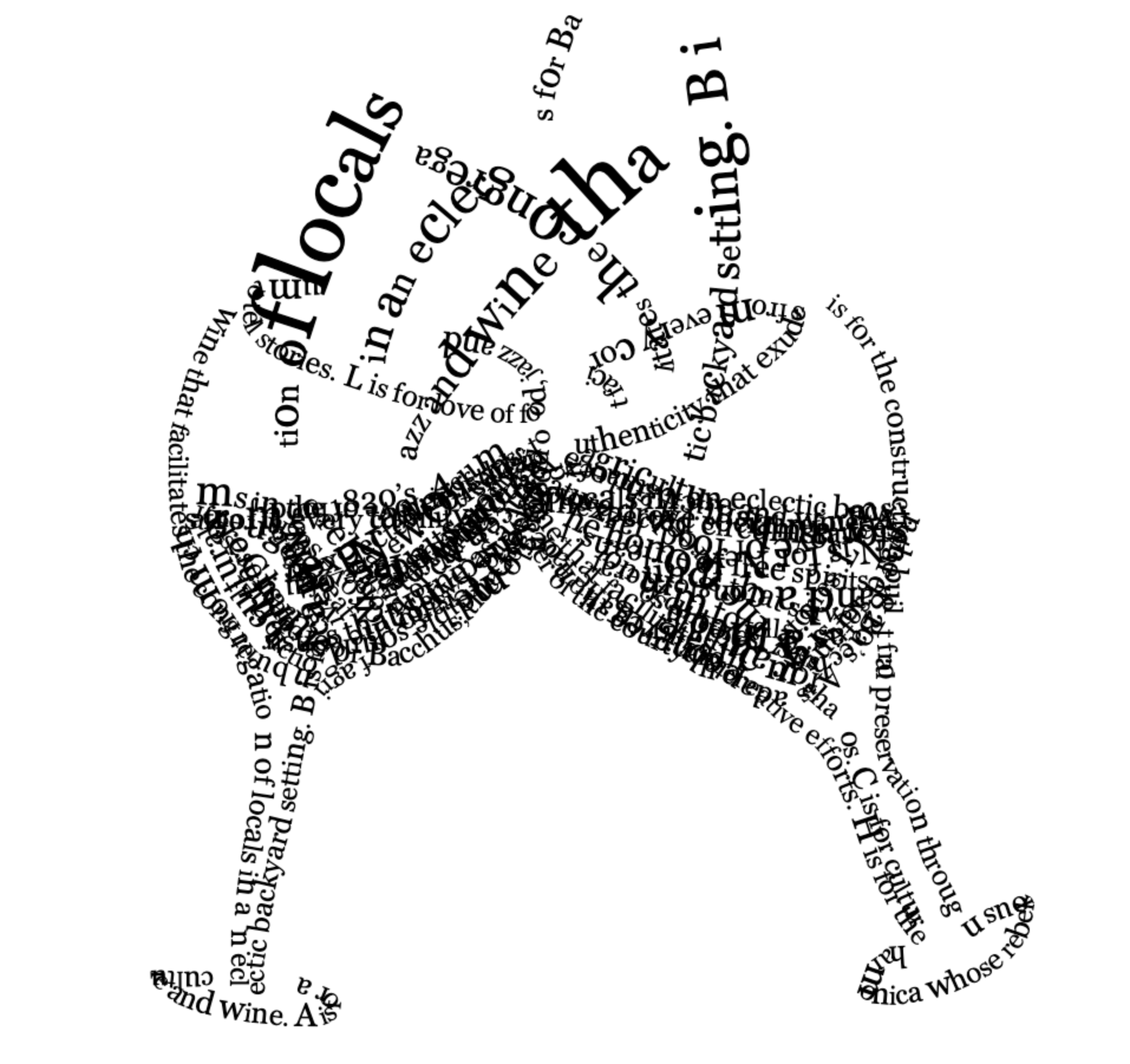 An alternative representation of the content mentioned within the post. This visual is intentionally chaotic and messy, symbolizing the thematic chaos that has shaped the growth of Bacchanal. (Collage by: Abby Aronson)