You know it’s summer when: All you want is a Plum Street Snoball 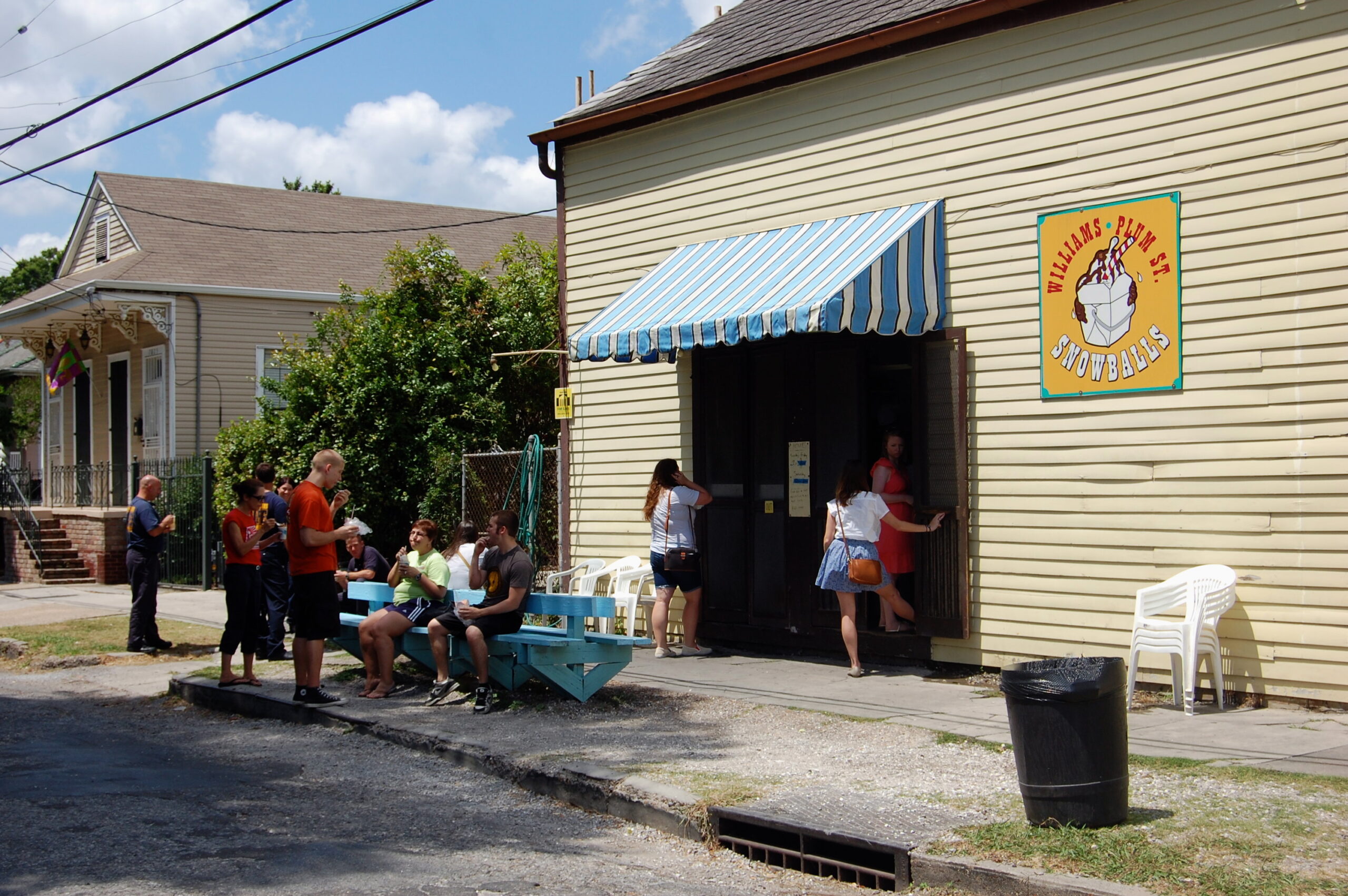 Outside view of the Plum Street Snoball shop. (Photo by: Morgan Maschler). There’s always hot debate over “snowball” versus “snoball,” and for this piece, the “w” is out!

Plum Street Snoballs: from the outside, you would not expect this unassuming brown, worn-down building to be one of the most famous spots for the New Orleans snoball summer classic. However, they serve the most bohemian-like, simple combination of shaved ice and syrup that is the perfect refresher on a hot, stressful day.

Like everything in New Orleans, snoballs are different. Owner Claude Black and his family have operated the Plum Street Snoball stand for decades, and he describes snoballs as a completely different dessert because the “texture of the ice is nothing close to what a sno-ball machine can make. A sno-ball machine is going to make ice like you have snow falling from the sky,” and I do not think there can be a more accurate description.

For my outing to Plum Street, I decided on a medium paper cup of Tiger’s Blood, which is a bright-red combination of strawberry, watermelon, and coconut. It stained my teeth, but it was all worth it for the sweet combination of flavors and ice — and a refreshing way to feel like a kid again. 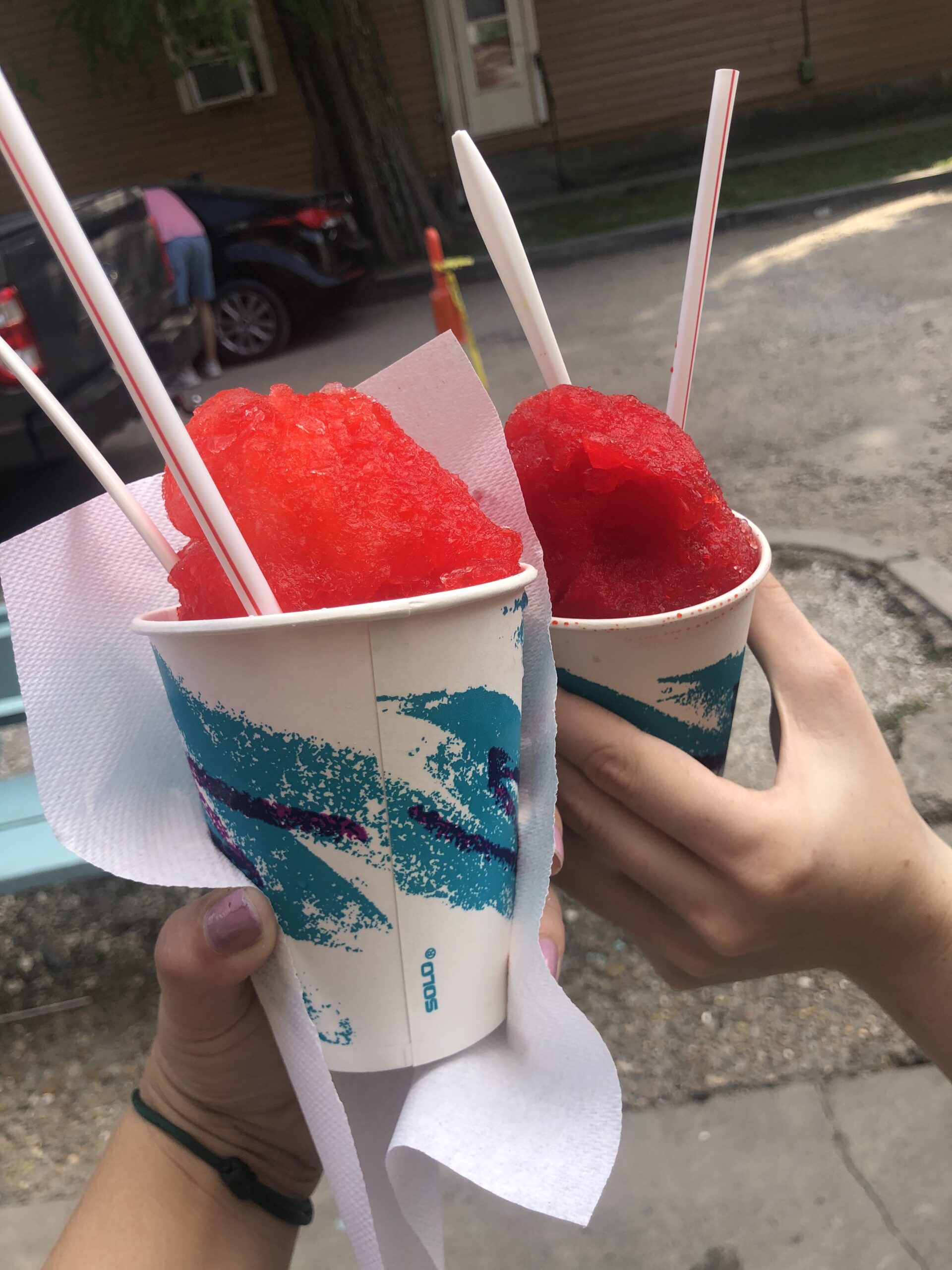 While Plum Street Snoballs has a wide variety of flavors from strawberry and wedding cake to orchid, my favorite thing about snoballs is their simplicity. There is finely shaved ice, some syrup or combination of syrups, and maybe a condensed milk topping, but that is it. So much flavor is packed into this small ingredient list in a paper cup or pail. It is so simple, and a more-than-reasonable portion is all yours for less than $3, making it feel like a bohemian snack. Bohemia values rest, relaxation, and being in the moment. Going to Plum Street  is a perfect opportunity in the summer to be in the moment, reminding us of when summers were what we waited for and hated when they ended as kids. Bohemian movements have aimed to break away from societal norms and expectations by going to the basics and doing what is best for oneself instead of molding to a collective. In a time of great division and lack of acceptance, American bohemian movements embrace coming together.

These past and current quarantine/pandemic years have proven difficult and isolating, but nothing brings people together like the power of food. When I was having a difficult day, my friend came along with me to Plum Street to take a break for a simple treat.  In the ever-complicated and changing world that we live in, owner Donna Black describes how, New Orleanians like tradition and for things not to change. The quarantine year was full of ups and downs, but there’s a relief when you know that hole-in-the-wall snoball stand is still going to be there to serve you a nice little snack.

Claude and Donna Black work extremely hard to maintain their business and not cut corners. They do not use preservatives, and they are always working to move tens of thousands of snoballs a week during peak season. Bohemian culture is often associated with punk music or a care-free, almost lazy outlook on life, but Ann Powers explains that is not necessarily the case. Bohemian values are about thinking locally and acting entrepreneurially in a practical, positive community. Plum Street is not open year-round, so they need to generate as much business as they can in order to sustain the whole year. Like snoball mad scientists, they create fun, exciting flavors like bananas foster, strawberry cheesecake, and king cake in addition to the classics to keep customers new and old coming back. Many of their customers have been coming to Plum Street for years and even decades. They operate their business with the community in mind to create a community at their little stand. Customers create relationships with Claude and Donna with some making the stand the first stop after getting their driver’s license.

Powers tells the story of a group apartment she lived in on San Francisco’s Fulton Street in the 1980s in the book. This apartment was not pretty or extravagant, but it was theirs. Their little bohemian world was simple and special. To me, that is what Plum Street Snowballs is. It is not the fanciest or most exciting place in the world, but for a brief moment, you can escape from life complexities and enjoy a delicious, perfect summer treat.