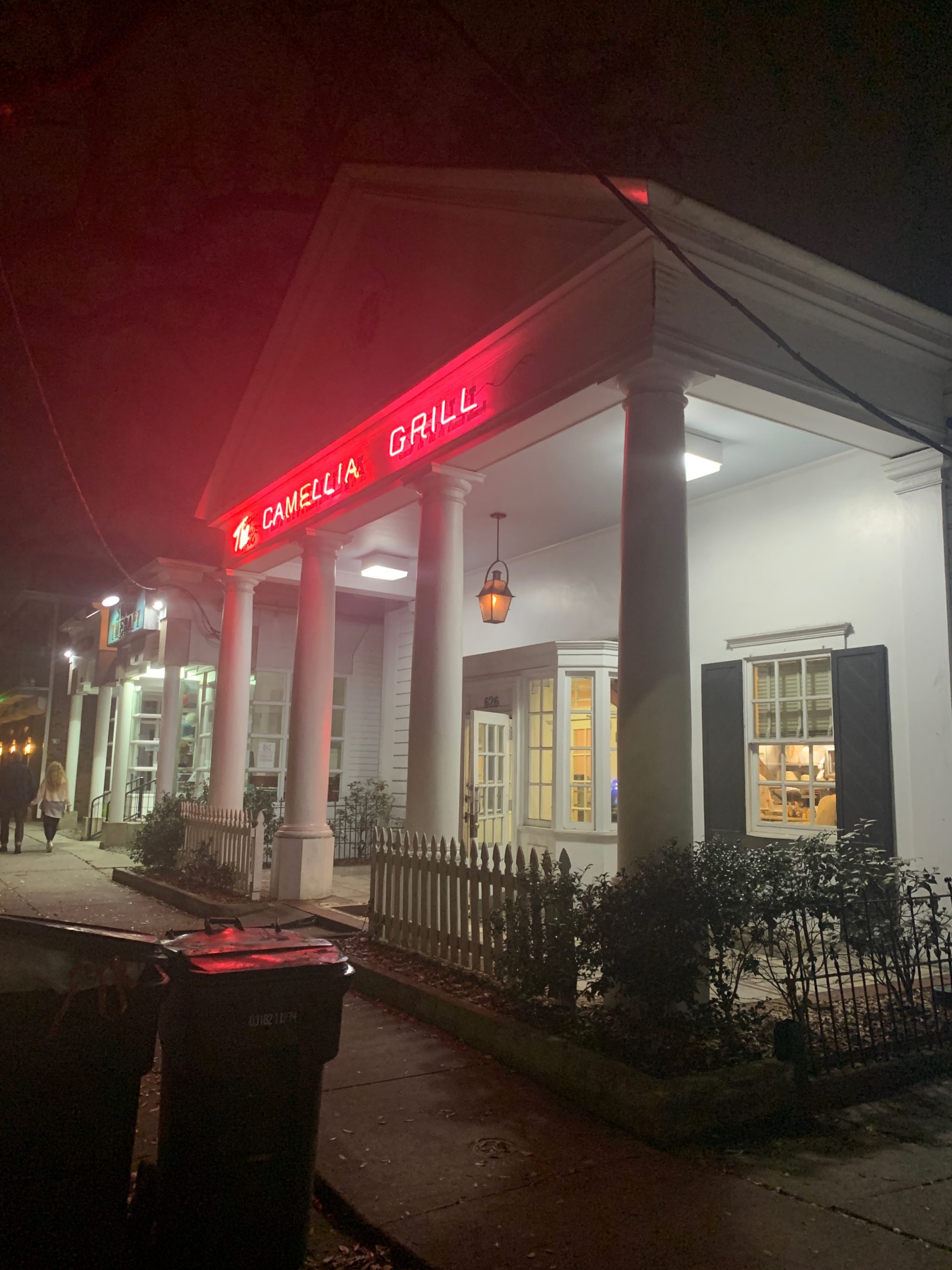 Outside of Camellia Grill.
(Photo by: Alex Chesen)

Early Wednesday evening at approximately 5:15 P.M., was the first time that I walked into Camellia Grill with a different intention other than to stuff my face with amazing diner food. The ambiance in Camellia was different– in the sense that it was much quieter than usual and nearly empty. Yet, going out of my way to pay attention to the sound that were present only enhanced the experience.

The first sound that stood out to me after listening over my recording inside Camellia Grill was the constant sizzling of the grill. I can’t imagine that over time this specific sound hasn’t remained consistent while inside Camelia. The thing that stands out to me about Camellia Grill is that in a city where drinking alcohol is so prominent, Camellia gets away with not selling any alcohol partially because of a simple sound that is so present like the of sizzling on a grill. There is a connection that is formed between people when there is no alcohol in the picture. In Chapter four of the book Creole Italian: Sicilian Immigrants and the Shaping of New Orleans Food Culture, by Justin A. Nystrom, a similar situation occurs. It is stated that,

“New Orleans’s Sicilians were deeply invested in the restaurant and food-service industry, an economic space that could scarcely thrive without booze. At the same time, they had built their place in the city on the basis of importing, manufacturing, wholesaling, and retailing all manner of goods, including wine and liquor” (87).

The Sicillian’s were in the same tough spot that Camelia is in now: they are both in an industry that thrives off of the sales of alcohol, but neither the Sicillians nor Camelia benefit from this. In arguably the most iconic drinking city in America, customers continue to pack inside Camellia Grill because they become preoccupied by the close proximity. A lot of this has to do with the visual experience that the customers get that goes along with that sizzling grill. In most restaurants the customers are isolated from the chef’s and the food that is being cooked is not visible. That is where the appeal comes from with Camellia Grill. The combination of a mouthwatering sound and visibility to see where the sound is coming from, provides the customer a connection with the servers. The proximity encourages conversation; this is a concept that is not considered ordinary at restaurants in New Orleans. 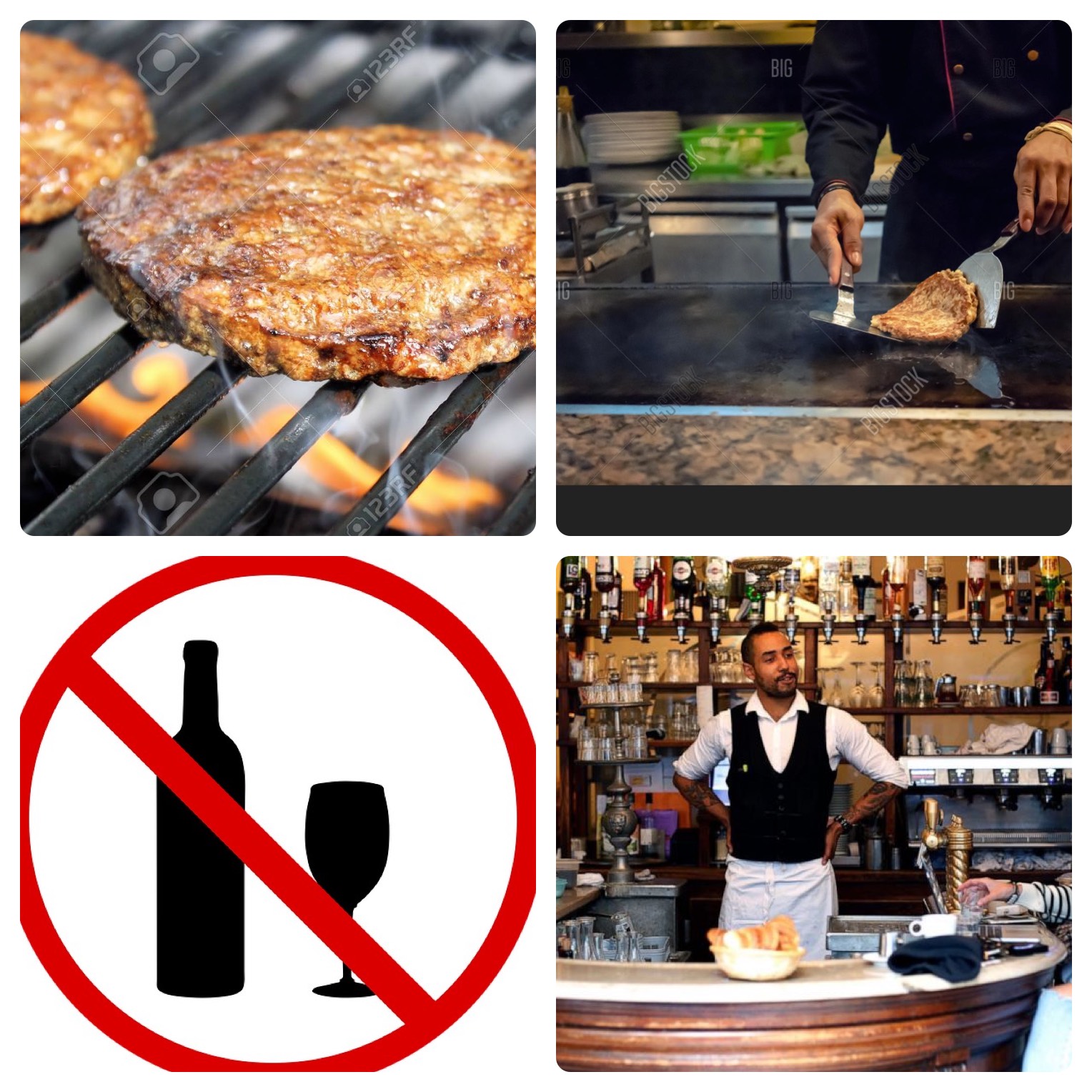 Even with just three parties inside Camellia while I recorded, food was constantly being thrown on the grill; therefore, this amazing sound was on an everlasting loop. Sometimes the sound was intensified when new things were thrown on; however, there was never a point where it wasn’t heard. In a way, these colliding sounds symbolize the way the chef’s and customer’s relationship, while present, is limited. The chef’s at Camellia are subjected to continuous labor, only interacting with the servers as they listen and proceed to cook whatever the servers have commanded them to make. The chef’s are not unfriendly, but due to the fact that they are so busy, conversation stays strictly between the customers and servers. This proves that alcohol completely ruins the integrity that is involved in conversation. Thinking straight and remembering facts about people are integral parts to a genuine relationship. Alcohol ruins the human connection between people because you do not think clearly which creates a false understanding of who someone actually is. It seems like history in regards to the Sicillians being able to thrive without alcohol has impacted Camellia because they are able to do the same. Similar to the Sicilians in the 1920’s, we see in the modern day that Camellia Grill continues to thrive without selling alcohol, a circumstance that is uncommon in New Orleans.

The second most intriguing sound when listening back again was the metal clacking. From a visual standpoint, this occurred when the chef was using his spatula to toss and turn the food on the grill. The visual combined with the sound is important to stress here. This is because listening to the chef’s spatula bounce up and down on the grill, while also watching the skill that goes along with that, is beautiful art. This may not be considered quintessential art; however, from the perspective of a customer, who is not capable of using utensils in such an advanced way, it is true craftsmanship. In fact, in the Journal Article, “Magic Meals: A dining guide to New Orleans,” Kathy Cannata explains in regards to the New Orleans food culture that it is “not just about the food. It is also the music, the history, the architecture, the creativity, and the quirky, gracious people that make eating in New Orleans an experience unique to this magical city” (68).

Specifically, I would like to highlight the architecture and creativity in this situation. If it wasn’t for the close proximities between myself and the chef, the voice memo would not be able to capture such a particular sound. The metal clacking was not as consistent as the sizzling of the grill, but it did occur numerous times throughout the recording. This is because even though the chef’s are constantly working, they are not always flipping something. The metal clanking from the chefs utensils were only heard when an item needed to be flipped in order to cook it properly. The only sounds that are heard other than the chef’s utensils being used are the conversation between the friendly servers and customers. This is a sound that is central to the connection that arises between every customer that steps inside the grill.

It distracts customers and focuses their attention on the masterpiece that is being created right in front of them. Not only does the visual of the grill distract customers, but according to an article on bizneworleans.com, it is explained that food is “served at a counter by outgoing waiters who often banter with customers and one another.” This continues to prove my point that Camellia is a place where connections develop. I

The unique setup where sound plays such a big role creates a distraction so that each customer practically steps outside a city that has such a big alcohol influence. The connection between the servers and the customers is influenced by the friendly atmosphere as well as the architecture. In Camellia Grill, the combination of sounds that are heard contributes to the overall warm ambience that is felt while inside this historic diner.