Do we still need the Grammys? 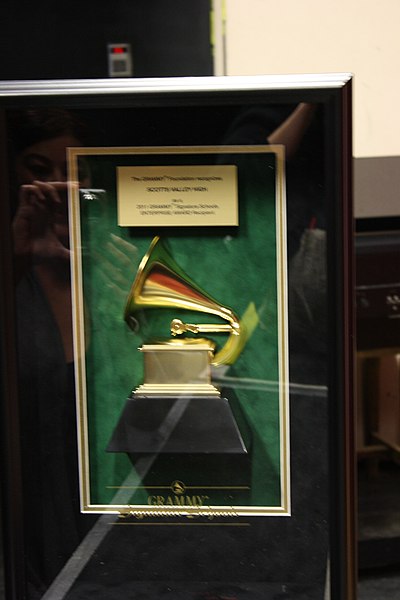 Grammy Awards — are they even needed or wanted? (Photo: Wiki Commons)

I grew up in a family that loved watching award shows. Being the music fanatic I am, my favorite was the Grammys. My parents would host watching parties annually. Family and friends would gather around the television in their costume jewelry and finest attire. We would draft our top picks for each category. But it wasn’t about winning a prize as much as it was about being right- to boast that your taste level aligned with the “experts” in the Academy. But the older I got, the more I started having my doubts about the judgement of said Academy. I started to ask myself who is it that gets to define musical excellence? And are the Grammys, both as an institution and televised event, even still relevant in this modern era?

Let’s start with how the voting process works. According to Grammy.com, the Recording Academy is made up of industry professionals who specialize in everything from producing, songwriting, and vocal sound. Record companies and Academy members start campaigning, submitting music and videos to the Academy for their consideration. Then 150 unspecified experts ensure that submissions are “eligible” and properly categorized. The voting members then receive their first round of ballots but can only vote in their area of expertise, and the four general categories: Record of the Year, Album of the Year, Song of the Year, and Best New Artist. Through process of elimination, the nominees and winners are chosen based on number of votes. You will be surprised to know that an artist being nominated does not exempt them from voting. They can vote for themselves if they wish.Though this all seems fair, the Grammys have gotten called out recently for displaying gender and racial bias in both who the chosen nominees are, and the way they are categorized.

Lorde was notably the only woman nominated in the Album of the Year category at the 2018 Grammys for her smash sophomore album, Melodrama. On top of this, Lorde was only asked to perform live at the awards show as part of a group tribute to the late Tom Petty, not as a featured act. It’s a shame that they wouldn’t let the only woman nominated for one of the biggest awards of the night perform songs from her critically acclaimed album. The only woman to win an award that entire night was Alessia Cara for Best New Artist.

The then-Recording Academy president Neil Portnow made matters worse. In response to backlash, regarding this gender bias, he told Variety that women who want to be a part of the industry need to “step up.” This shows that the music industry power-players are ignorant about roadblocks that exist for women needing to break in. Women who are already in the industry can’t even get a fair shake.

And at this year’s awards, polarizing musician Tyler, the Creator had a bone to pick with the Academy regarding how music made by black artists are categorized. Tyler won Best Rap Album for IGOR despite the fact that “rap verses only made up 30% of the whole album,” according to The Daily Targum. Although Tyler, the Creator has made rap music in the past, this specific album incorporated synthesizers and vocal stylings associated with contemporary pop. At his post-win press conference, he commented, “I’m grateful to be acknowledged but also…whenever guys that look like me make anything genre-bending, they automatically put it in the rap or urban category.” His comments more than imply a lacking on the part of the Academy to give music by black artists the full recognition they deserve.

But the faults of the Recording Academy seem to run even deeper. Alex Abad-Santos explains in his article for Vox that Deborah Dugan replaced Portnow as CEO of the Recording Academy last August, an attempt to “fix their track record regarding diversity and inclusivity.” However, only weeks before the televised Grammy awards, Dugan was placed on leave for misconduct. The alleged misconduct sprung from a complaint of bullying made by an employee who conveniently was a long time appointee of Portnow’s. According to Dugan, this action retaliation for attempting to fix the “boys’ club mentality” perpetuated amongst Academy board members. She reported not only alleged corruption within the award nomination process, but being personally sexually harassed by a lawyer that represented the Academy.

The Academy’s only response was a vague public statement in which they announced a pending external investigation into Dugan’s claims, which is still currently underway. Although Dugan’s claims have not yet been proven, I’m assuming that their plan to hire a token female figurehead backfired. It looks to me they hired Dugan to appear like they were making progress in the eyes of the press. But when she actually attempted to confront the deeply rooted corruption, she was silenced. If we can’t even expect fairness and genuine inclusivity from the Recording Academy, what makes them qualified to decide the fate of artists or be the tastemakers of talent?

But besides the doubts I have regarding the integrity of the Grammy’s as an institution, I also question the relevance and longevity of the televised awards show. The New York Times reported that the 2020 Grammy Awards hit a 12-year low in ratings with only 18.7 million live viewers. Although this may still seem like an adequate amount of attention, cable television in general is slowly becoming more antiquated. Convenient streaming platforms and Youtube clips continue to capture their viewership. It makes me wonder if the accolades given will hold the same significance if no one cares to watch.

Changes in the media landscape, as well as the music industry, are occurring simultaneously. Success is no longer measured by amount of records sold, but the amount of times an artist’s music has been “streamed” on the various platforms such as Spotify, Soundcloud, and Apple Music. These platforms have provided an ease of accessibility, both for listeners and artists who want to get their music heard. After all, recent Grammy winner Billie Eilish was discovered when early tracks on Soundcloud went viral.

But this newer, wider pathway to success makes choosing singular artists as the “best” or “most popular” more difficult. Especially for those in the Academy who are experienced in the old, traditional methods of the industry. Overall, the shifting landscape of the media and music industries will prove to be a difficult obstacle for the Grammys to overcome in order to stay relevant to a modern audience.

My former adoration and faith in the Grammys has faltered. However, there are things that the Grammys gets right: their non-profit funds a scholarship program and MusicCares, which provides recovery and assistance to artists in need. These organizations are important, and should no doubt stay in tact. We may not need the Grammys, as it no longer reflects the attitudes and trends of modern culture. But as long as the Recording Academy take genuine steps towards undoing their corruption and discrimination, and the televised event is updated for today’s audiences, then there is still hope.

Pandemic playlist: Top 10 things to listen to in a Pandemic
Music
We use cookies to ensure that we give you the best experience on our website. If you continue to use this site we will assume that you are happy with it.Ok